My Angel Sister who Died TWICE 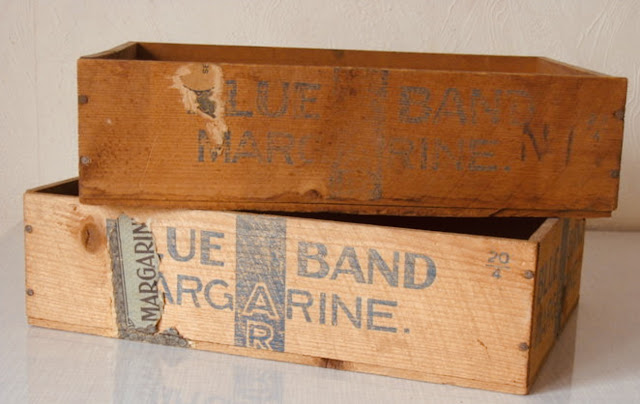 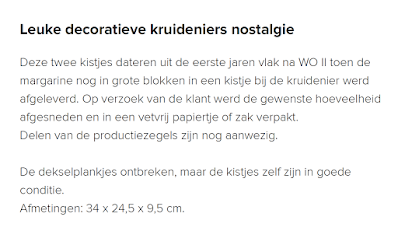 Cute decorative grocers nostalgia
These two boxes date from the first years just after World War II when the margarine was delivered to the grocery store in large blocks in a box. At the customer's request, the desired quantity was cut off and packed in a greaseproof paper or bag.
Parts of the production stamps are still present.
The lidded boards are missing, but the boxes themselves are in good condition.
Dimensions: 34 x 24.5 x 9.5 cm or 13.4 x 9.6 x 3.7 inches 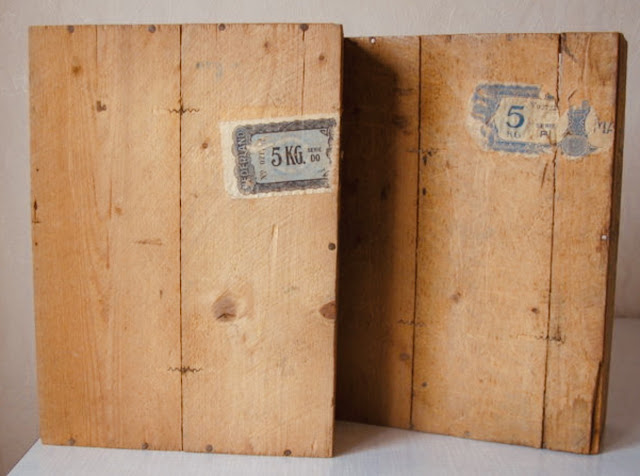 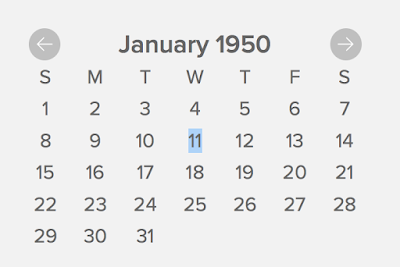 On Wednesday January 11, 1950 my Angel Sister Mariet was born...
At least, she struggled hard for making it into this world!
She was the very FIRST GRANDCHILD on Dad's side of the family... 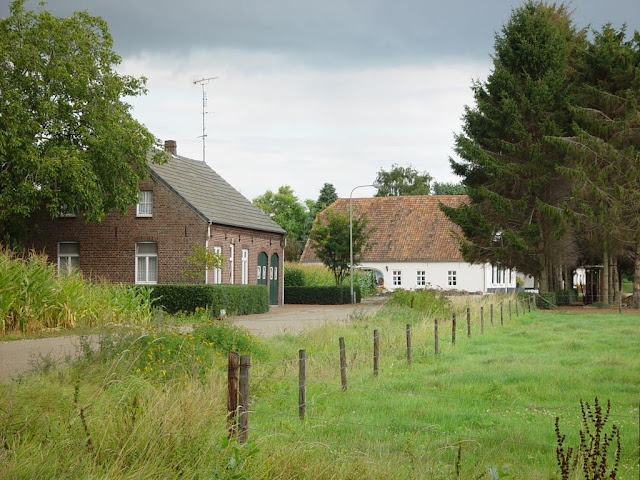 Here in the house (photo courtesy of brother Jan Van den Munckhof) where seven of us are being born, except the youngest who was born in the hospital...
Mom had to manage doing this with the assistance of a midwife, which was normal for that time.
My Angel sister had been too active and twisted around, so she had the umbilical cord wrapped around her neck and arrived looking BLUE
None of them acted rapidly for giving AR (artificial respiration) to the baby, for saving it.
WORSE, it got taken away from Mom, she NEVER got to see her own daughter...
It would be better for forgetting and getting over it FAST, they reasoned.
How CRUEL. The baby clothes also got taken away.
Thirteen months later, I got born and again, I had the umbilical cord around my neck but the midwife came timely.
But now back to those Blue Band boxes...
Dad put the tiny body of my Angel sister inside such a wooden Blue Band box and put her under the fast-binder at the back of his bike.
My Angel sister Mariet was not allowed to be buried on blessed ground of the real Catholic Church's graveyard but instead on a small parcel of ground next to it.
When I was a toddler and a bit older, often Mom would take me there for a visit.
She told me about my older sister that had my name... I could feel her unprocessed grief.
I've for that reason, always felt so very close to her and in a way tried to live for her as well.
Maybe that's why I got two crowns on my head, a funny way for trying to part my hair when making two tails.
Later on that parcel of ground, an iron shop got constructed, also selling household goods.
~
My Angel sister has been always very close and I often can sense her presence.
She has been watching over me.
When I talked to Mom over the phone after she got hospitalized, it was on my Angel Sister's Birthday, January 11, 2015.
Mom had been weeping all night, so scared and feeling so lonely.
Then around 7:00 AM Dutch time (1:00 AM our time), I called and a gracious nurse lend her the phone for half an hour.
I started by saying to her: Congrats with the Birthday of your first born today!
Oh, she said, is it?... I had not realized that and her voice changed.
I then went on that SOON she would finally be able to hold and hug her and SEE her for the first time.
She did so on January 27, 2015.
It felt so good for sharing these thoughts with her, her innermost thoughts and even for me myself, they'd been pent up feelings for so many years. 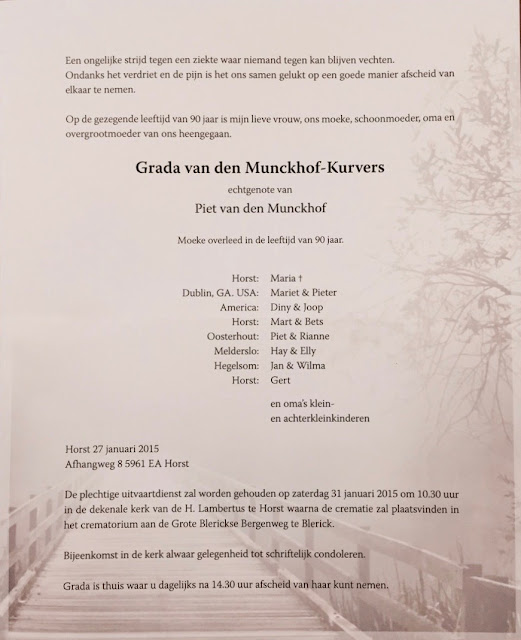 When Dad himself, was still active as the family patriarch, Mom's obituary came to be like above:
My Angel sister is listed at the very top, strange though with her baptismal name, one of three and she never got baptized...
Guess they found it odd for listing twice 'Mariet'...
Dad had arranged a solemn requiem Mass at our local Catholic Church, where also the choir sang, in which Mom was a member for over 25 years and lately, together with Dad.
Organ music and all.
Again, this got done by Dad, the patriarch! 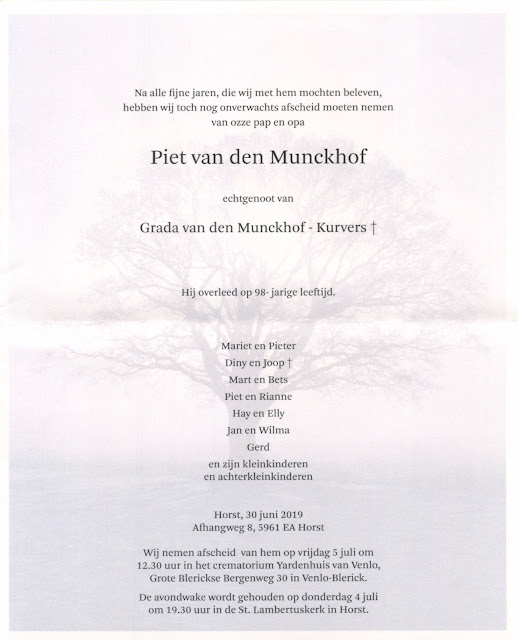 The patriarch had died himself so now my sister Diny took the lead and she omitted our Angel sister!
So that is WHY she Died TWICE!
She did however add her significant other to whom she was not married...
Worse, there was NO requiem Mass, nothing, not even a chance for condoleances.
And that for Dad, who got his Royal Certificate for being a Choir Member for exactly 81 years to the date of his death. He got a Certificate for 70 and 80 years; unique in The Netherlands! 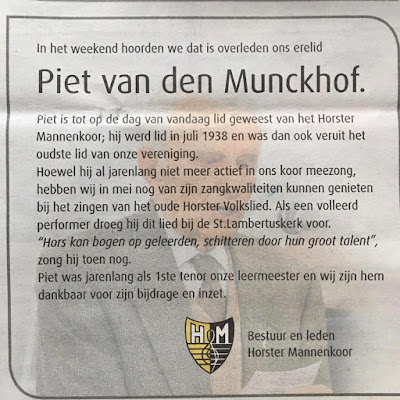 Over the weekend we heard that our honorary member has died
Piet Van den Munckhof
Piet has until this day been a member of the Horster Men's Choir; he joined in July of 1938 and was by far the oldest member of our association.
Although he has not been actively singing in our choir for many years, in May we were able to enjoy his singing qualities when singing the old Horster Anthem. As an accomplished performer, he recited this song at the St. Lambert Church.
"Horst can boast of scholars, shine because of their great talent", he sang then.
Piet was our teacher for many years as a 1st tenor and we are grateful to him for his contribution and commitment.
Board and members
Horster Men's Choir 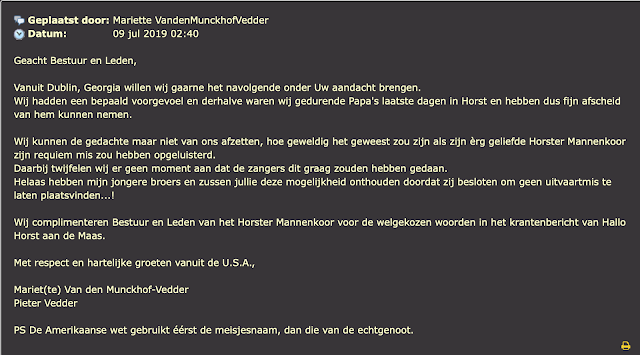 In the guest book of the Horster Men's Choir I replied to the above:
Deemed board of directors and members,
From Dublin, Georgia we would like to bring the following to your attention.
We had a certain premonition and therefore we were during Papa's last days in Horst and thus have been able to say goodbye.
We cannot take the thought out of us, how wonderful it would have been if his very beloved Horster Men's Choir would have graced his Requiem Mass.
We do not doubt that the singers would have liked to have done so.
Unfortunately, my younger brothers and sisters have denied you this opportunity because they decided not to have a Requiem Mass...!
We congratulate the board of directors and members of the Horster Men's Choir for the well-chosen words in the newspaper report of Hallo Horst aan de Maas.
With respect and warm greetings from the U.S.A.,
Mariet(te) Van den Munckhof-Vedder
Pieter Vedder
PS The American law first uses the maiden name, then that of the spouse.
Related links:
From CitizenM Hotel on Delta Airlines from Amsterdam to Savannah, Georgia | previous post by me
{January 11 Angel Sister had 1st Birthday in Heaven together with Mom...} | previous post by me
{My Angel Sister & Mariette's Back to Basics Explained} | previous post by me
Posted by Mariette VandenMunckhof-Vedder at 7:00 PM