With Northwest Orient aboard the 747, husband Pieter did arrive after 10-½ hours at the Narita Tokyo International airport of Japan, local time 17:00.
They needed a temporary visa which was no problem at all.
By bus they went to the Radisson Hotel Narita 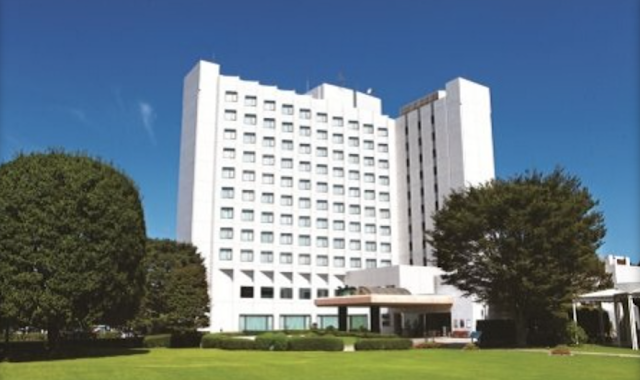 Radisson Hotel Narita is a great place for staying longer...

On March 22 of 1987, it was still called Narita International Hotel... 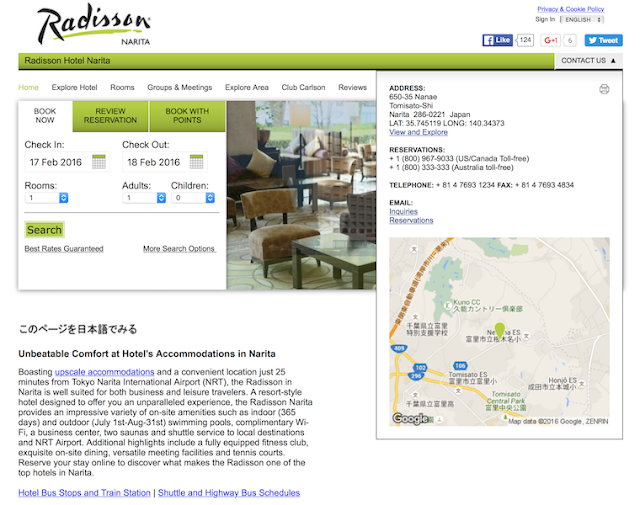 But the address remained the very same, and also the telephone number.
While the delegation went by bus to the hotel, Pieter wrote in his diary that he'd never seen so much military and tanks etc. around the airport, it looked like they expected an attack any time.
The Japanese dinner with chop sticks went well and it even went better with some hot  Sake wine.
Everybody was very tired so they were in bed by 21:00... But Pieter managed to write some postcards and a short letter to me.
On Monday March 23, Pieter woke up early and had breakfast alone and took a walk. It was a cool and rainy day.
Pieter also prepared the slides for his lectures to be given to Chinese Universities.
By 9:00 they all went by bus to the Naritasan Shinshoji Temple and a shopping center. 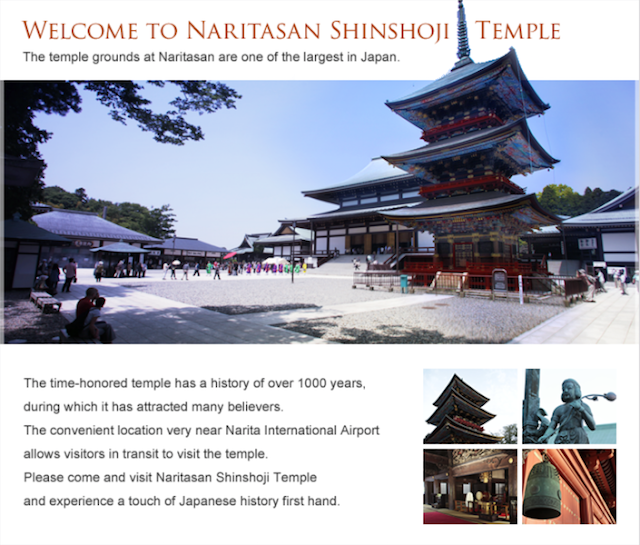 Sorry there are no actual photos as I mentioned already, we lost several slides during our move... 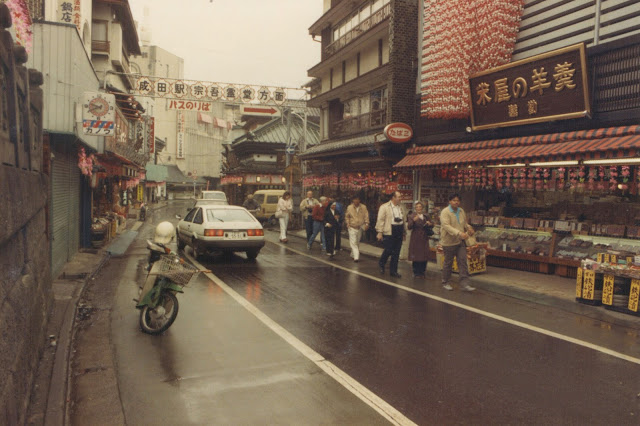 The weather was not so good for taking photos... as visible in this photo above.
By bus they went to the airport again and with flight 930 C.A.A.C. 747 to Shanghai, China with a lay over of 1-½ hour before continuing to Beijing.
Flying on such a rattling Russian Ilyushin Il-62 was quite an experience!

Again there were lots of soldiers...
The service on China Airlines was by far not comparable to our US airlines. Flight attendants could learn from e.g. Singapore airlines.
Pieter asked for some white wine with his dinner and the flight attended filled up his coffee cup (yes, with wine!).
C.A.A.C. means Civil Aviation Administration of China

Late evening arrival in Beijing, China in the rain and it was rather chilly.... 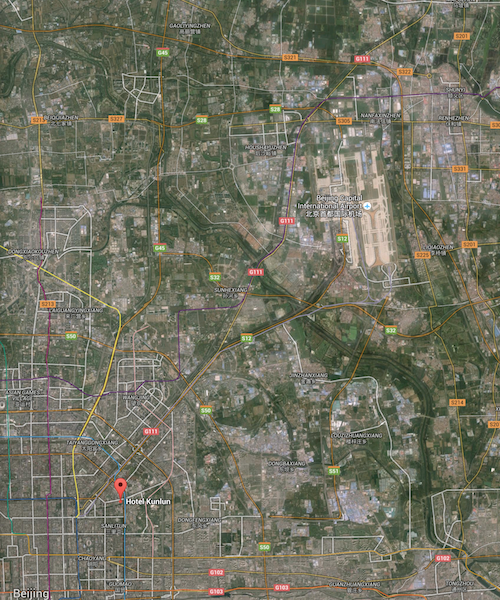 Luckily Hotel Kunlun (red marker bottom left) was not far from the Airport (to the right at the top).

Will be continued with Arrival in Beijing, China...
Thanks for your visit!

Related links:
{Part I of Husband Pieter's Trip to East Asia} | previous post by me

{We at least got SOME Magnolia Blossoms}

So pleased with the turnout of SOME Magnolia Blossoms on our Magnolia x soulangeana!
Tuesday, February 23, was such a lovely and even warm day when we got these photos made. 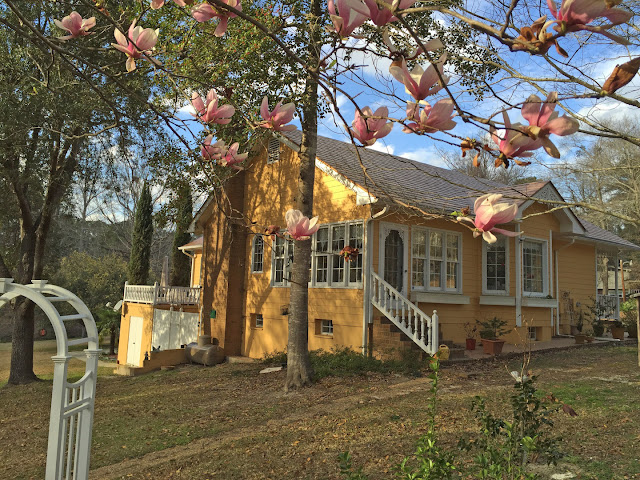 Don't you love to see an almost blue sky and such huge magnolia blossoms?!
The previous days were rather dark, not good for photos. 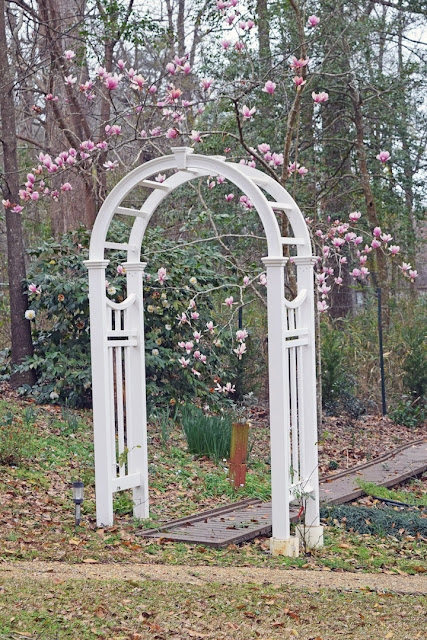 On Monday, February 22, Pieter took this photo where we still had more blossoms on this tree but no sunshine, just a dreary day... 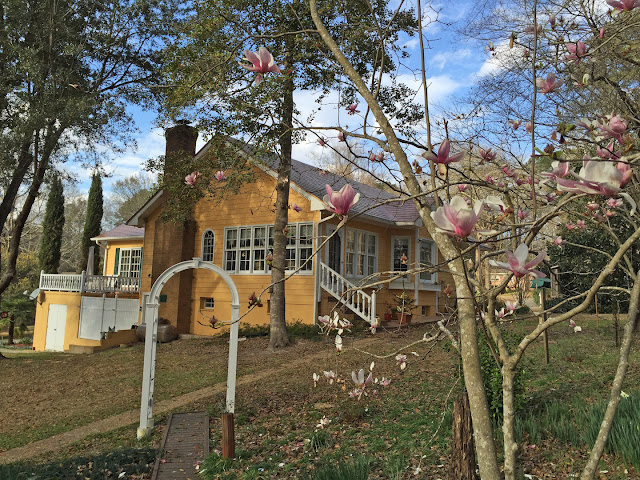 Luckily, this 2nd Magnolia tree was not blooming yet on December 30, so it had a lot less frost damage later in January.
You can find the links below this post from December 30, and also from spring 2011, when we had PERFECT MAGNOLIA BLOSSOMS! 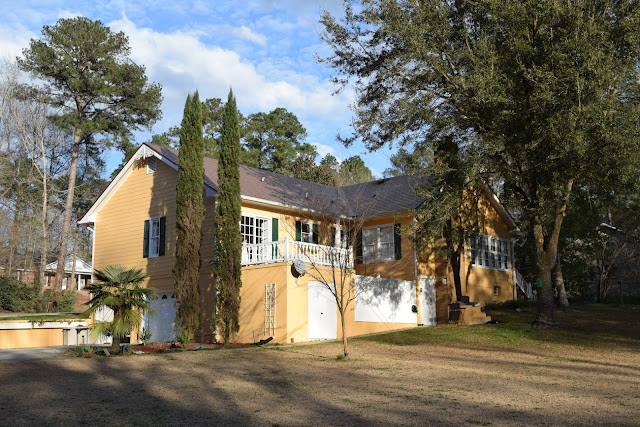 Love the house when the sun is out; things look so happy even with the dead winter grass.
Yes, Centipede grass dies completely back during winter!
Do you notice that the shadow of our live oak tree on the wall looks like another tree? 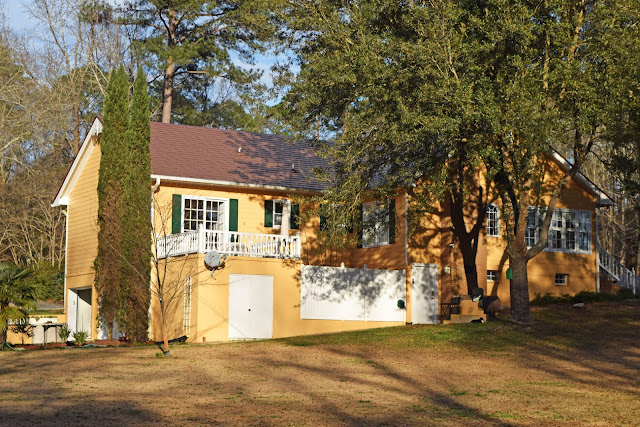 Sadly our Italian cypress trees are brown...
Not looking too happy and we lost already one of the total three.
Again, looking like two live oak trees with the strong shadow on the wall!
Also in the photo below, that shadow remains. 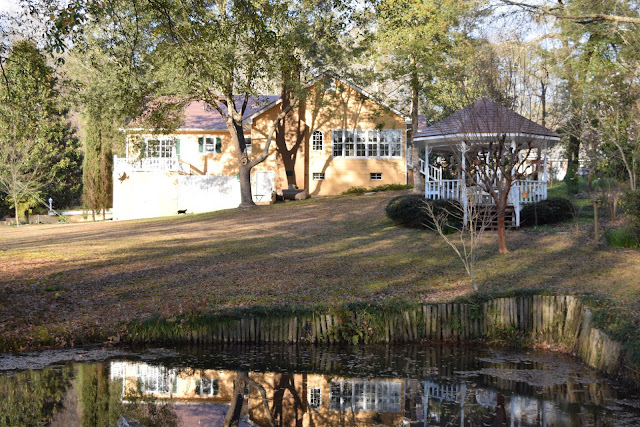 Husband Pieter took those last three photos.
Taken from behind the pond with the gazebo visible too.
One of our kitties is walking past the wall.
The sunshine makes that wall look almost white; which is not the case as you see in the above photo.
Love the reflection in the water.
Spring is in the air and I'm happy because of it!

Email ThisBlogThis!Share to TwitterShare to FacebookShare to Pinterest
Labels: Our Felines, Our Gazebo, Our Home, Our Magnolias, Our Pond

{Part I of Husband Pieter's Trip to East Asia}

Let's start with these series of husband Pieter's Trip to East Asia on his People to People Citizen Ambassador Program.
On Friday, March 20, 1987 we both left for the Atlanta airport to leave the USA.
Pieter was flying west bound to East Asia and I was flying east bound to Europe...
So we hugged each other goodbye for 3 weeks and Pieter left with Northwest Airlines for Seattle, Washington state, via Minneapolis/St. Paul in Minnesota.
My plane left some 7 hours later so I stayed with some elderly friends till than. 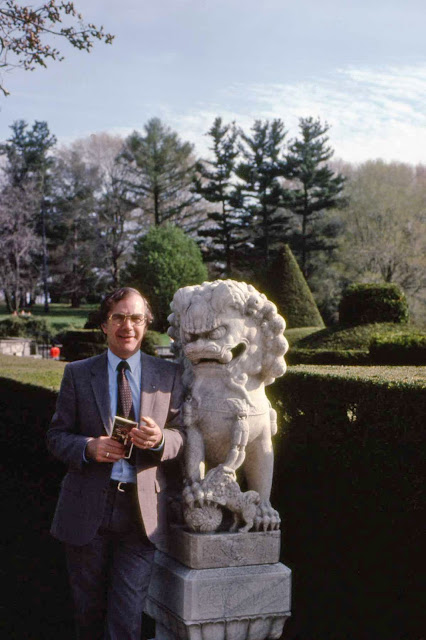 This is an actual photo from Pieter at his final destination in China!
~
Everything on Pieter's Northwest flight went well, and upon arrival in Seattle, they did have a briefing with the entire delegation.
They also had to practice eating peanuts with chopsticks, followed by dinner.
They stayed at the Four Seasons Olympic Hotel in Seattle

The Four Seasons Olympic Hotel is now the Fairmont Olympic Hotel, Seattle but the address and even phone number did not change!
Next morning after breakfast they again had some briefings, with Max Gerber of the Citizen Ambassador Program and guest speaker Karl Lo, Director of the University of Washington East Asia Library.
After that we went by bus to the airport for check in.
Pieter got an upgrade with Northwest Orient and had seat # 12 in Executive class from Seattle to Tokyo, Japan on Northwest Orient flight 07. 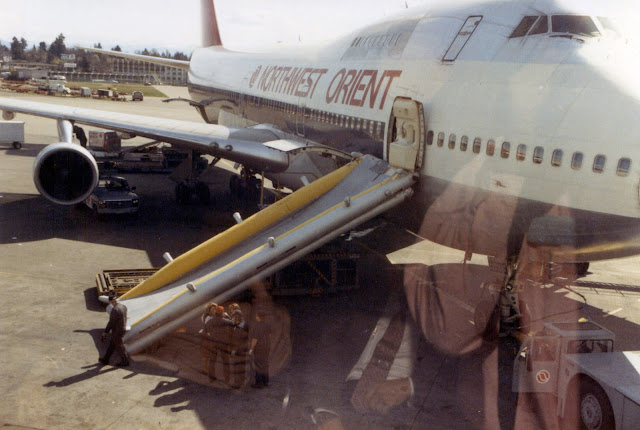 Than somebody made a mistake and the evacuation slide came out and got inflated!
That caused two hours delay... 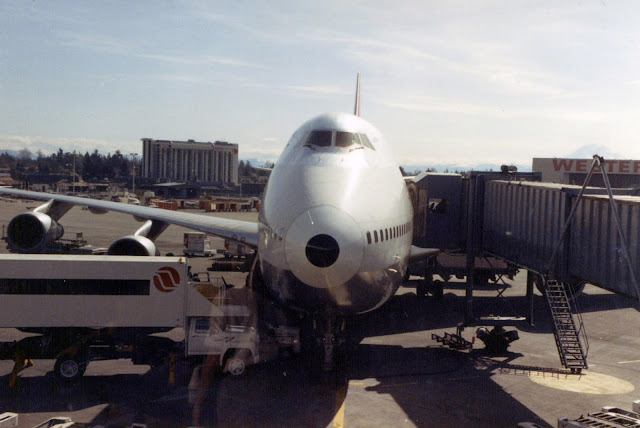 The flight to Tokyo was about 10-½ hours and it was a strange experience for having daylight the entire time.
It was Pieter's first time, flying over the North Pole but he could not see anything because of cloudy weather.

{The Most Poisonous THREE-Letter Word... "EGO" - Overcome it}

Here is another quote about the Most Poisonous Three-Letter Word... "EGO" - Overcome it. 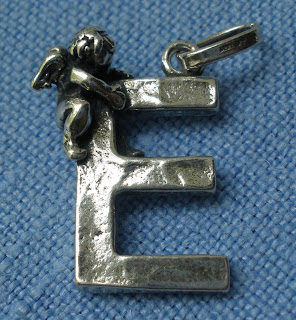 We better let go of this "EGO" and become a more lovable person!

That makes us a little more 'angelic'

Like seen here on this Italian silver Giovanni Raspini Charm, with alphabet letter "E" and Angel for wearing your Name's First Letter.

Other alphabet letters are available at Spectrenoir ←just click.

It has been quite a challenge for finally working out this incredible East Asia journey to Japan, China, Hong Kong and Taipei...
Yes, after husband Pieter's actual trip on March 20, 1987 till April 10, 1987!
But it meant so much to him and due to his age, I wanted to get this out of the way before anything else!
Archiving things!

Pieter, being a world renown mushroom expert, got chosen for joining a group of 10, to visit Universities and lecturing and making field trips on behalf of the Mushroom Industry.
His employer Campbell Soup did fully cover his expenses.
How much I would have loved to join him but we had absolutely no funds for doing so.
Paying for daughter Liz who studied at the Royal Academy of Arts and Design in Den Bosch, The Netherlands and also paying off the mortgage of our home at a hefty 9% rate for the time. As well as paying off my Ford Escort...
We also opted to fund the biggest part of Mom & Dad's FIRST flight to the USA...
So I did fly in opposite directions, to The Netherlands, when Pieter started his trip with a flight to Seattle, Washington.
This also proved to become our LONGEST time apart as Pieter had to go to Europe for about a week, right after Taipei.

In–between we had Mom & Dad for 3 weeks staying with us in the USA and I did most of the sight seeing with them as Pieter only had the weekends available.

I flew back with Mom & Dad to The Netherlands, as I had to do consulting work in Germany for 2 weeks...
All this while Pieter went to Australia and New Zealand for Campbell Soup.

We did have a very close blissful relationship via phone... 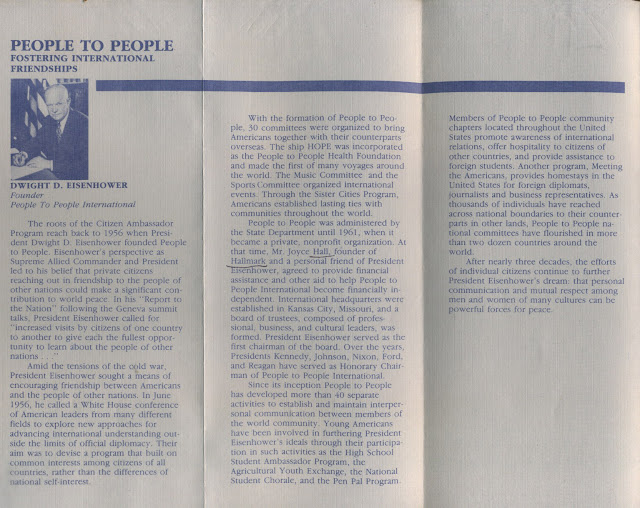 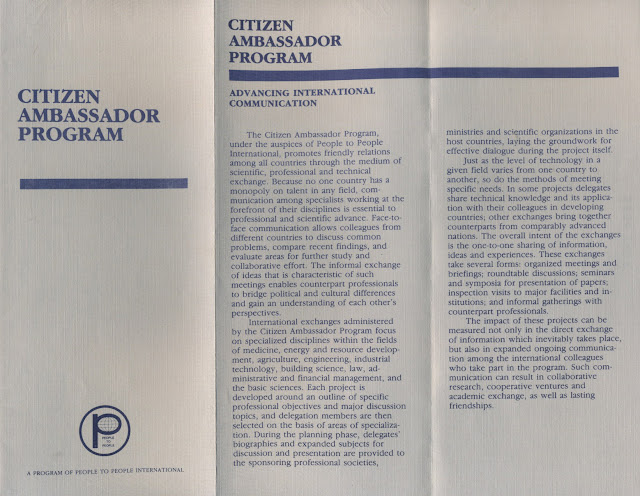 HONORARY CHAIRMEN
People to People International
At that time it was President Ronald Reagan... 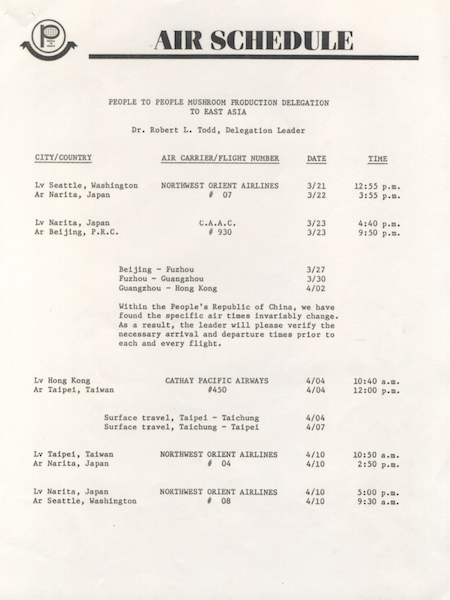 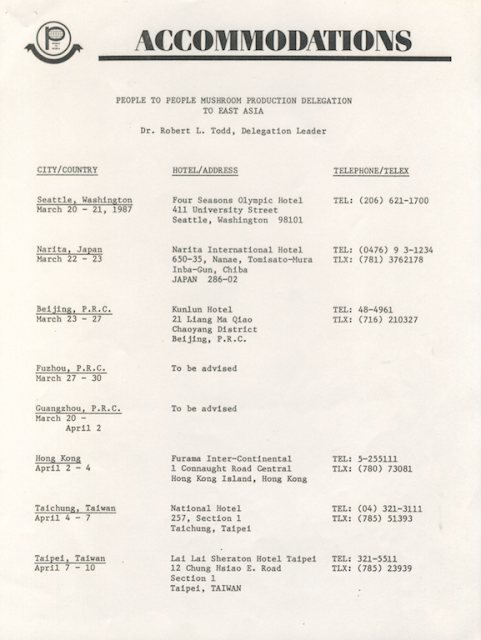 Bear in mind that at that time we had no digital cameras yet and thus photos are not dated with information from area taken etc.
Due to our very turbulent life style at the time and an upcoming move from Georgia to Pennsylvania we never found the time for exchanging thoughts and viewing together his slides from this mega trip.
Also one box with slides etc. ??? got lost in that move... Making the puzzle only harder.
But last year I managed to scan all available slides and now I also managed to scan some photos that Pieter had developed from his trip.

So in some upcoming posts you will get to see some of his incredible journey.

I also will try to visit some of your blogs...