{The Most Pleasing FIVE-Letter Word... "SMILE" - Keep it}

Another great quote with international meaning: The Most Pleasing FIVE-Letter Word... "SMILE" - Keep it.
It sure has tremendous value and it is FREE for giving. 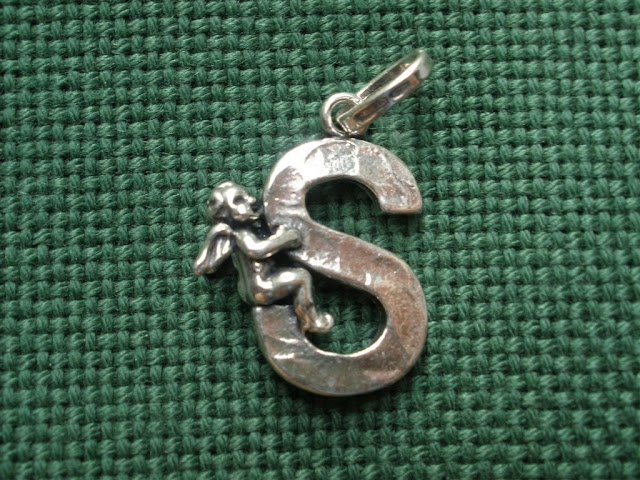 Yes, let us try to KEEP IT!

That sure does make any face more Angelic and Happy.

Like seen here on this Italian silver Giovanni Raspini Charm, with alphabet letter "S" and Angel for wearing your Name's First Letter. 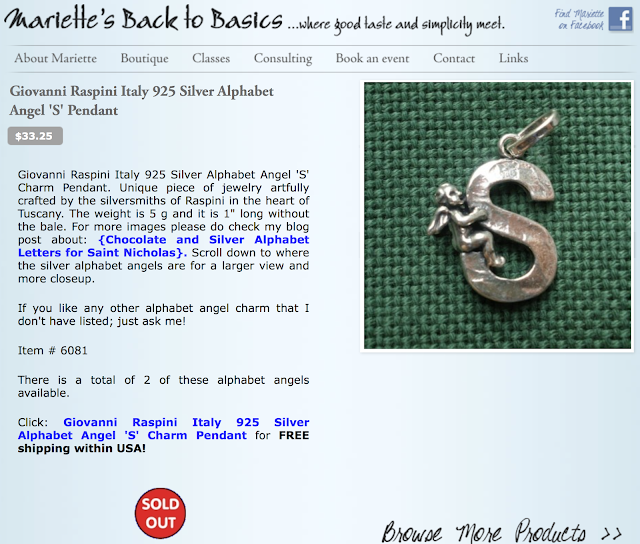 Sorry, Sold Out...
This Italian Giovanni Raspini 925/100 silver Alphabet Angel "S" is available for only USD 33.25 with FREE shipping within the USA:

It was shortly before midnight on March 23, 1987 when the People to People Citizen Ambassador Program delegation arrived at their Kunlun Hotel in Beijing, China!
A very cold hotel, that still was under construction... New, and not totally completed yet!
BUT with very nice rooms.
After a shower and emptying the suitcases, Pieter went to bed; tired...
It now has been 3 days in the air for finally arriving here and staying for 4 nights! 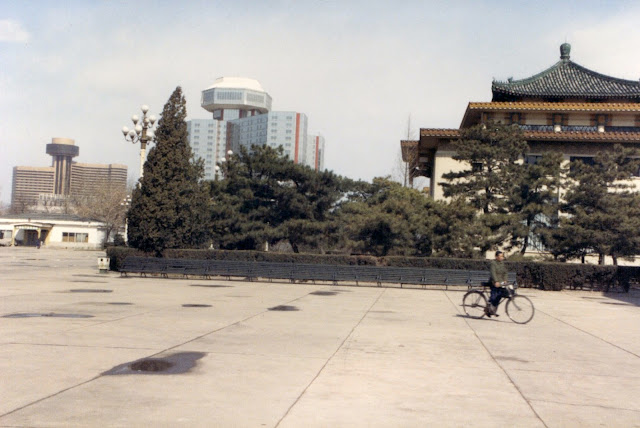 In the morning, things looked different and Pieter did explore his new surroundings.
The Kunlun Hotel is seen to the left in his photo ←click on hyperlink for slide show of actual hotel. 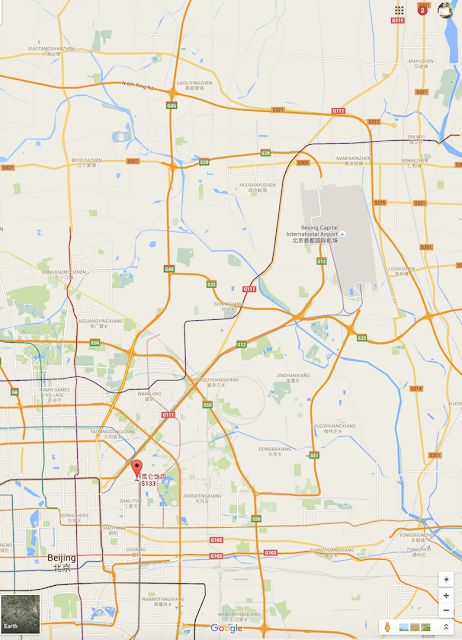 Luckily, Beijing International Airport was not far away from the hotel.
The gray area to the upper right is the airport and the red marker is where the hotel is. 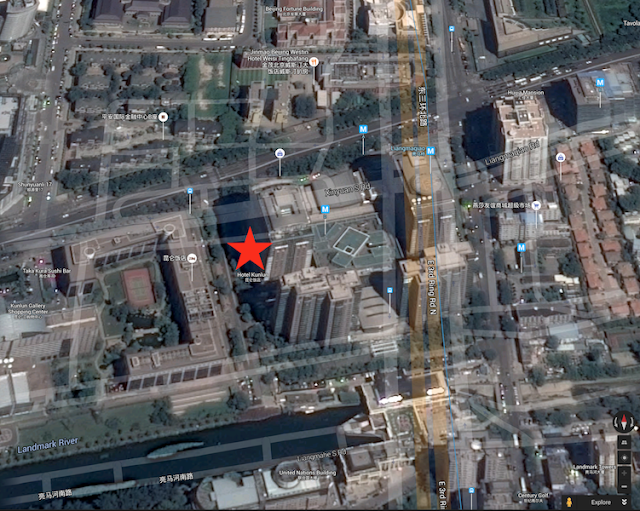 The red star is where the hotel is, lots of high rise buildings at present time. 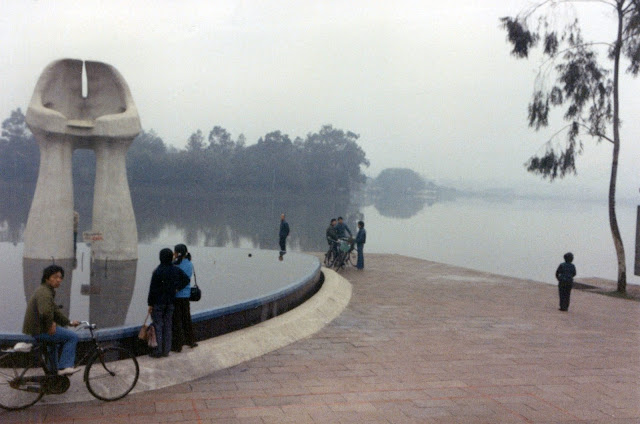 This is on the Liangma (Landmark) River, below the hotel where Pieter walked to assess his new surroundings.
Cold and still rainy... 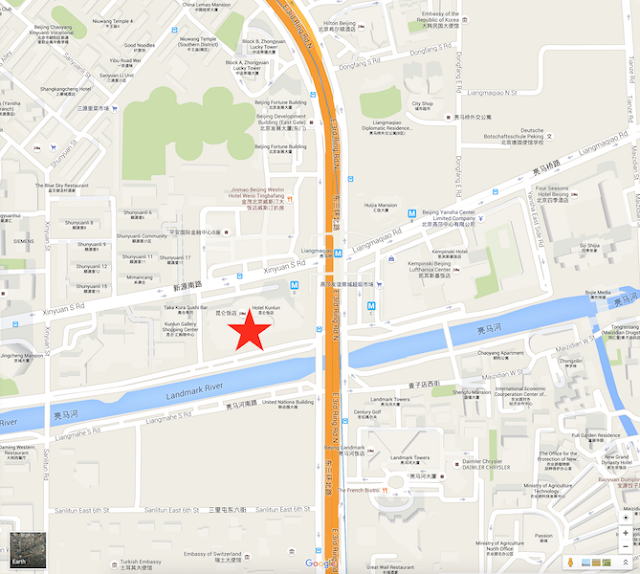 Here, on this Google map, you can see where the river is so you get an idea as well.

The hotel name was correct, they only seem to have changed the street name and phone number. 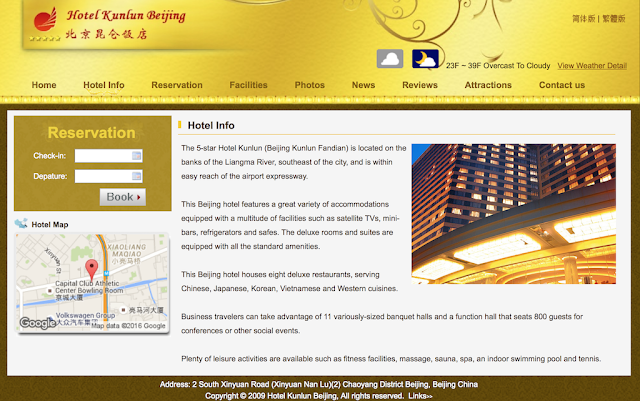 It is a 29-story Hotel.
Only one block away from the diplomatic residential compound, within walking distance of the Lufthansa shopping center, and has easy access to the International airport. 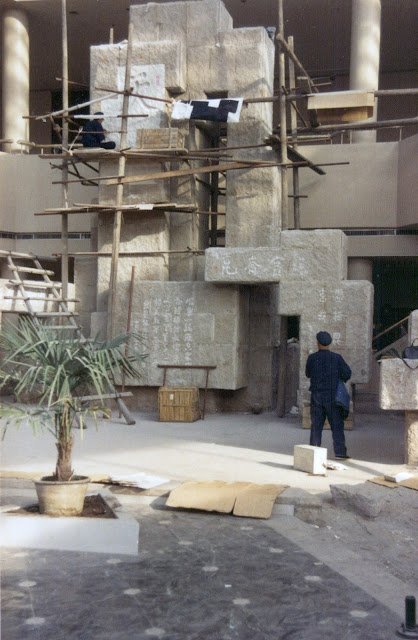 Early morning, Pieter felt so sorry for all the young waitresses, dressed in a crisp white blouse and black skirt, lined up in the windy hall! They must have been freezing...
Because it was still open, not yet closed in as you can see on this photo, still carving on blocks inside the lobby area.
For breakfast, the entire delegation kept their coats on due to the windy draft going through this area of the hotel... Brrrr! 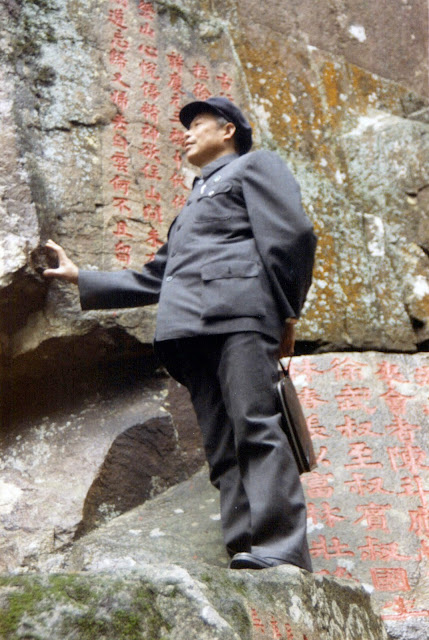 This is outside of the hotel, beside the entrance... 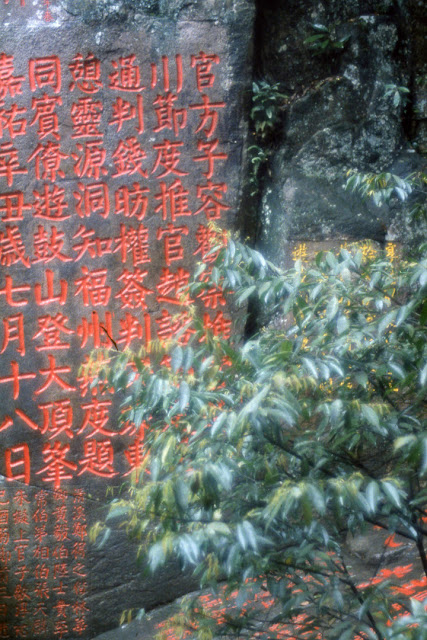 Can anyone read this text?... 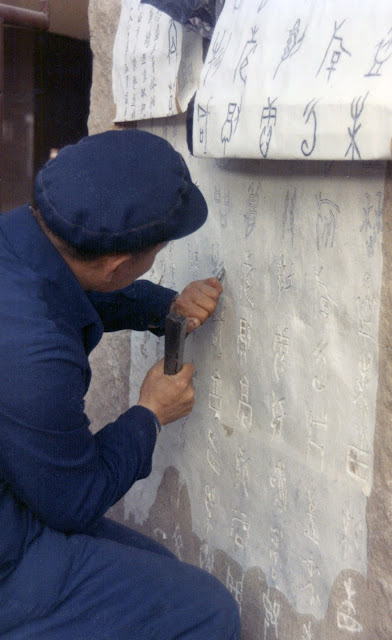 It was quite a study for observing how they create this! 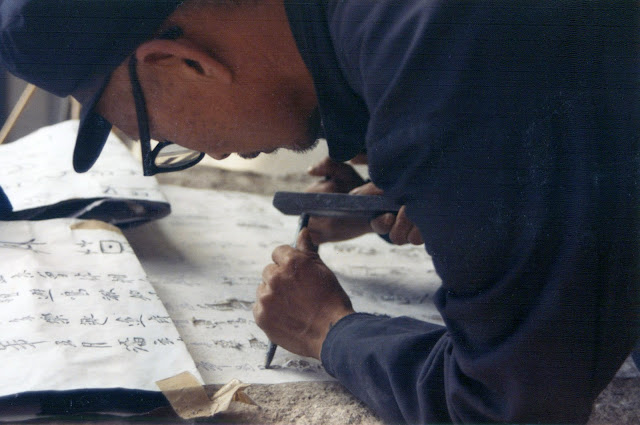 The paper is covered over the stone... But it is a precise art! 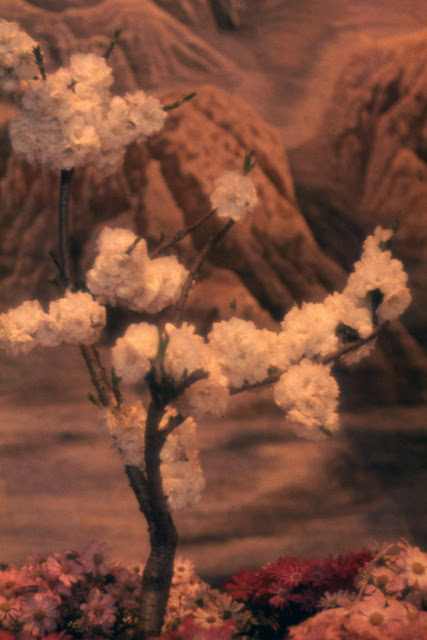 This painted mural was also in the lobby area, with a blooming bonsai in front and other plants. 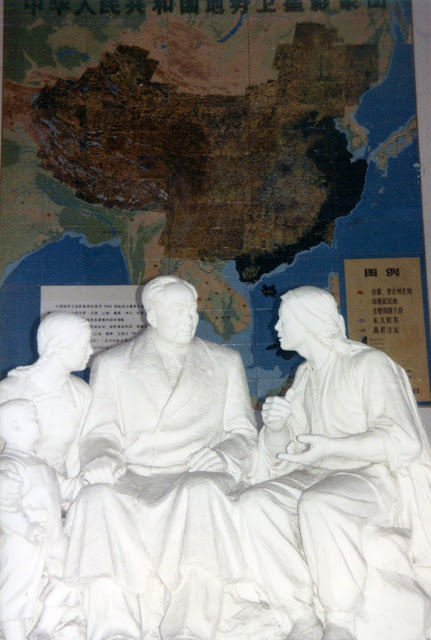 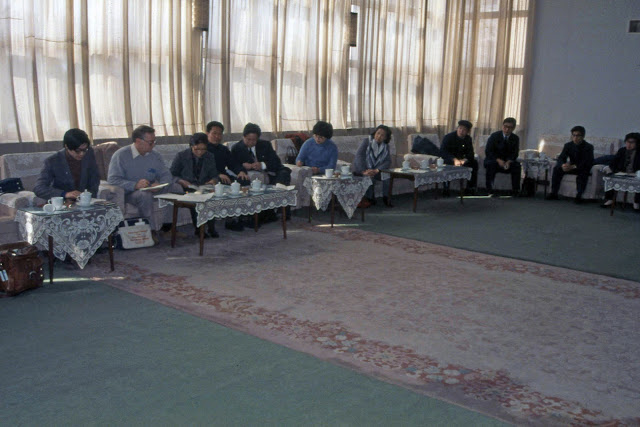 First meeting in the capital, with people from the University of Beijing.
As a microbiologist and mushroom expert, Pieter did give two lectures that day as they visited the Beijing University and their Research facility.
Keep in mind, this was NOT a vacation trip...
While in the People's Republic of China, the delegation was under the official sponsorship of the China International Exchange Association of the Ministry of Agriculture, Animal Husbandry and Fishery.
The Ministry also did provide English-speaking guides. 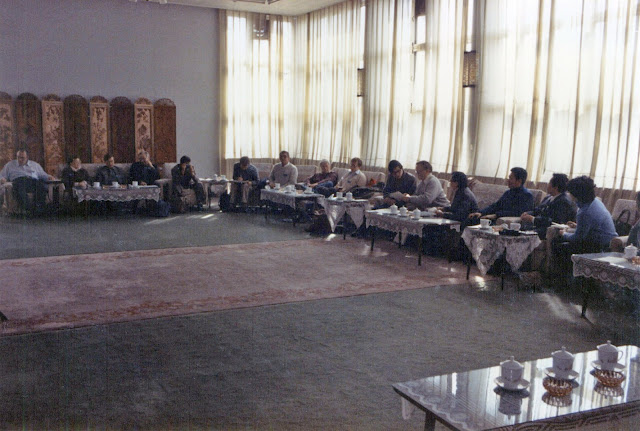 Look at the huge room for such a meeting...
Tea was served and it must have been rather difficult for communication across such distances! 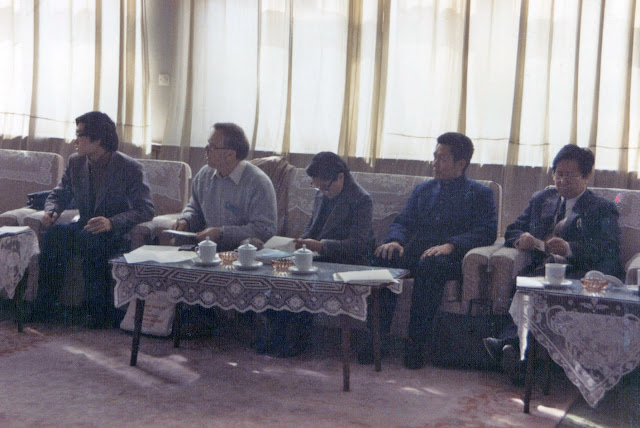 The Chinese were very eager to gather knowledge and to exchange with this group of mushroom people from the USA.
Some of them did recognize husband Pieter as they had been several years back at his Practical Training College in Horst, The Netherlands! 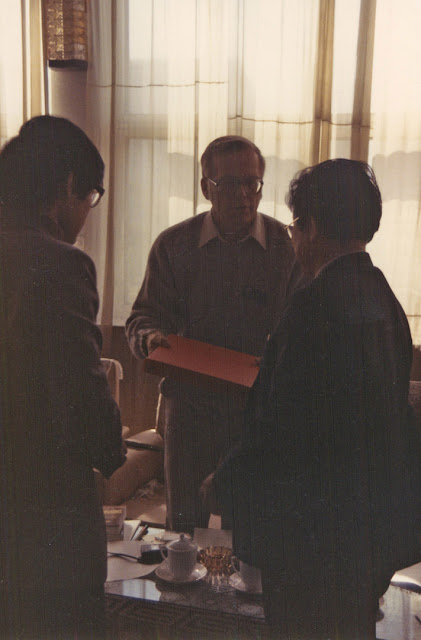 Gifts got exchanged between the Americans and Chinese...
Pieter of course did offer his English book about Modern Mushroom Growing.
They were very pleased but told him that they just got it in Chinese!
That sure did perplex Pieter and he didn't believe it.
However, they went to the library and showed it to him. Pieter made these pictures. 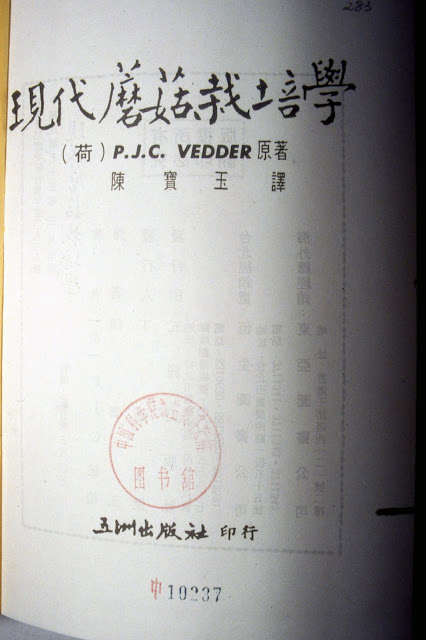 Of course we can only read husband Pieter's name... 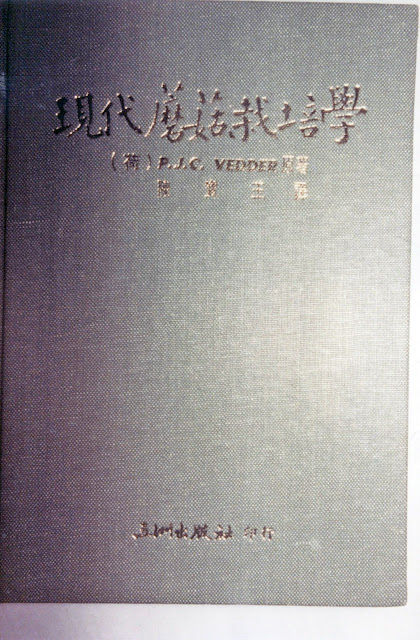 The cover of husband Pieter's book.
They just stole it, without asking permission...
If they only would have asked, Pieter could have provided them with the negatives for the photos, so the end result looked a lot better than their poor copies of photos. Also the paper quality was poor.
BUT one of the delegates, Jin-Torng Peng, Ph.D from Taichung, Taiwan promised to give Pieter a copy towards the end of the trip...

The day got partly video taped by the Chinese TV and rounded up with a nice banquet attended by officials of the Ministry of Agriculture and People to People delegates.

Will be continued with City Views of Beijing...

And here is maybe THE most important Word, in whatever language! 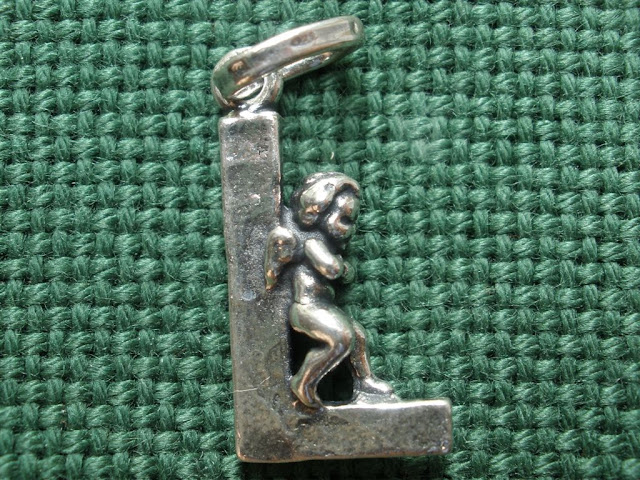 It happens to be in English The Most Used FOUR-Letter Word... "LOVE" - Value it

Yes, LOVE does bring out the most Angelic qualities of a human being and I dare to say, also in our pets as they sure know how to love unconditionally!
So let's cling to that like this Angel is straightening its back against the L... Would again make a lovely gift this silver charm.

This Italian Giovanni Raspini 925/100 silver Alphabet Angel "L" is available for only USD 33.25 with FREE shipping within the USA:

Other alphabet letters are also available at Spectrenoir ←just click.