Sorry for not having had time to visit other bloggers and for commenting this past week! But whenever a daughter comes for a visit, it is a special time and I just wanted to give you an update on our special girl. We had a lovely time together with perfect weather for the first three days, almost like summer. Some cooler weather for the final days but that makes probably for a smooth transition between Dublin, Georgia and Rotterdam, South Holland in The Netherlands. She will be back, as she more and more is falling in love with the US, as she fell also in love with Canada. Getting to know our country better each visit is rewarding for her and for both of us, as well as for our friends and extended family on this side of the Atlantic. Here she is, a photo from a couple of months ago. Below you can read an earlier post about her. 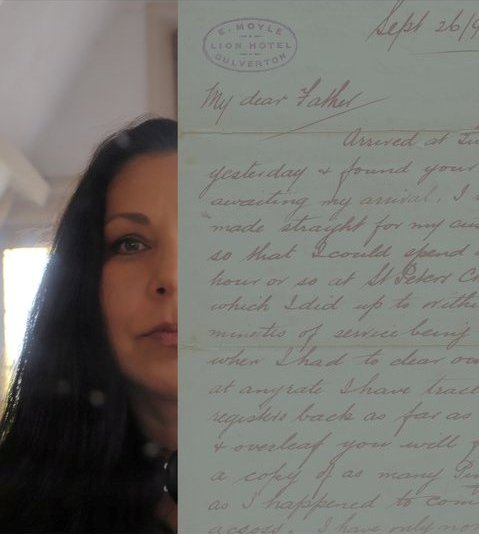 ~~0~~﻿
Republished below, from an earlier post of May 06, 2010.
~~0~~
With Mother's day coming up it is appropriate to tell a bit more about our family... Both of us, Pieter and I, have been married before. From his previous marriage Pieter had an adopted daughter, Lisa Maria Jeurissen, who came to live with him at the age of one-and-a-half. Her biological father was a first cousin of her adoptive mother, Thea. He'd immigrated at a young age from The Netherlands to Canada and married in British Columbia with, Thelma Clark, who was part Scottish and part first nation. Liz was the third child from that marriage, her eldest brother is, Lars Van; then comes, Tony Dale and she was the baby. Around Christmas when Lizzy was just about a year old, the marriage soured and they split up. Her dad had the idea to put them on a flight to The Netherlands so they would be taken care of by his parents or brothers/sister... None of them showed any interest in his problems except his mother who took them home from the airport at least.
They had a problem; three little children ages one-and-a-half; two-and-a-half; and three-and-a-half and somebody had to be responsible.
So Pieter ended up adopting Lisa Maria right away, therefore even waiving any support from the government. He would have loved to take home all three of the children but his wife did not agree. It was Lizzy who clung around his neck and cried out: "Daddy, daddy!" Pieter melted then and there...
Several years later he tried once more to have the eldest boy, Lars Van, for some time into their home. Lizzy was six at that time and Lars around eight but again, his wife didn't want to proceed with an adoption so Lars Van went back to the orphanage and later he and his brother, Tony Dale, got to stay in foster homes, but certainly didn't have the kind of youth that their little sister Lizzy had. Let me show you a photo from Lizzy where she was around one-and-a-half. 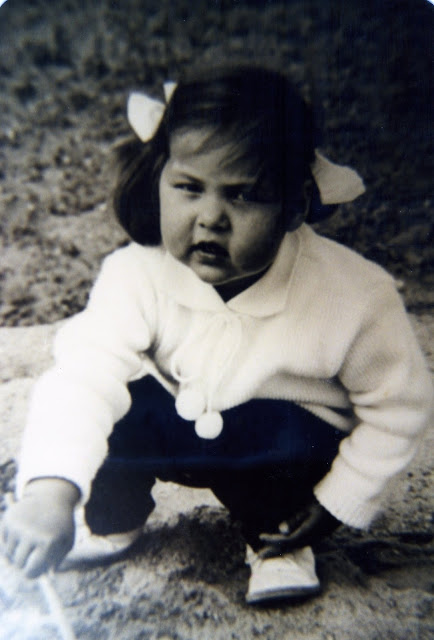 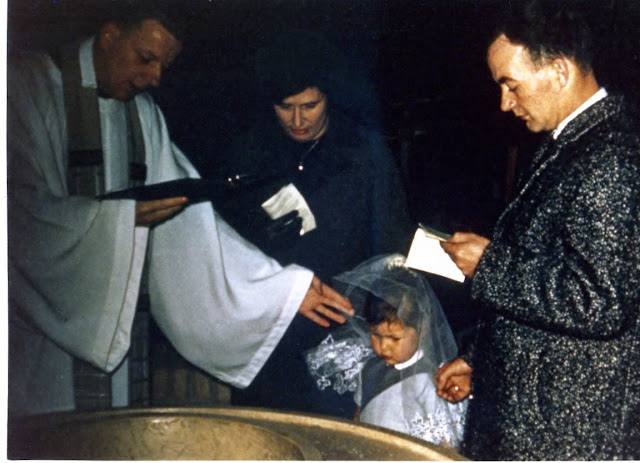 Lizzy is being baptized on her third birthday and her Godmother was her adoptive mother Thea's sister Edith, with Pieter's elder brother Toon as Godfather.
Lizzy was wearing a rather expensive designer dress for that very special occasion. 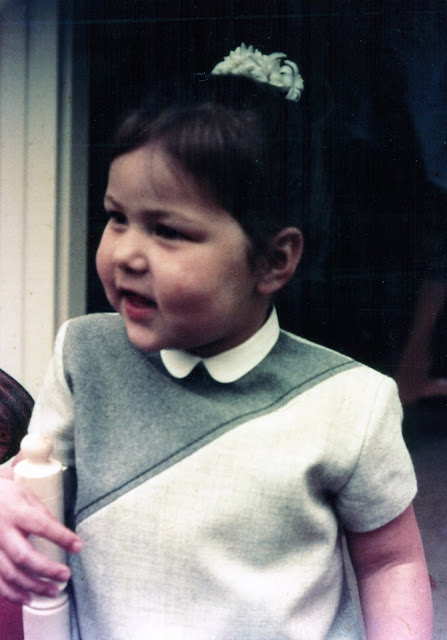 Here Lizzy wears the very same designer dress for a visit to her biological grandmother. Pieter kept that a regular routine, so she would at least get to see her brothers, who would be visiting there as well. From the left is Tony Dale; Lars Van; Lizzy and Ria, her first cousin, daughter of one of their dad's brothers. 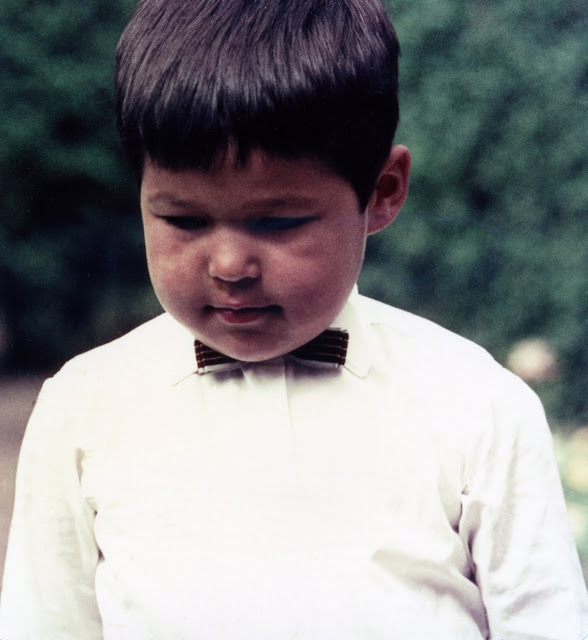 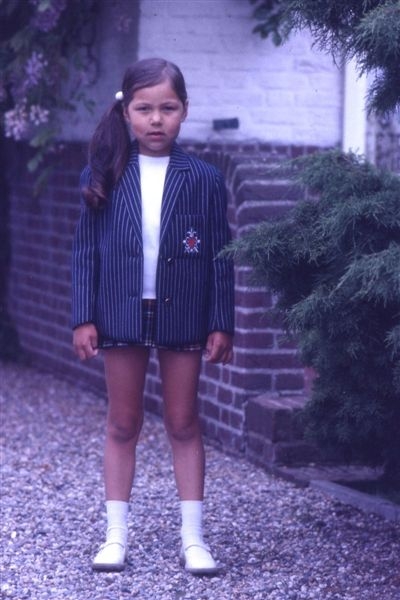 Lizzy wears a cute Scottish tartan plaid skirt that her Daddy brought her from the Scotch House in London where he was on a business trip. 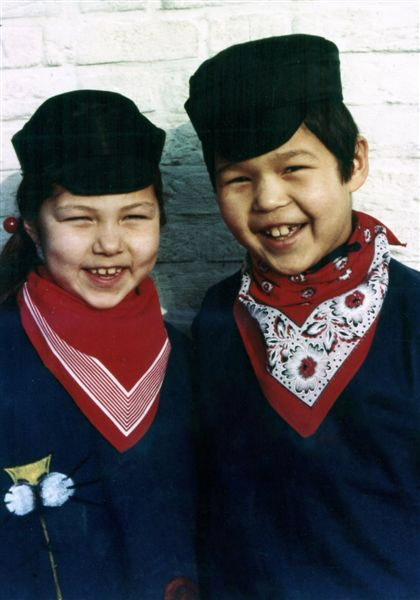 Carnival 1970 with her brother Lars Van, who was then living with Lizzy.
Happy times!


Meanwhile, Pieter had become a Rotarian and through Rotary they tried to trace the biological mother of Liz but no luck.
Even they worked with the Red Cross but again, in vain... They tried to trace her by her maiden name; Thelma Clark... 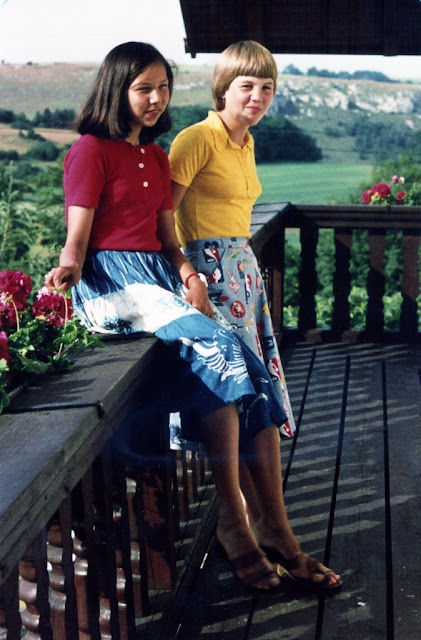 This photo above, is taken in Austria, 1978.
Always when going on vacation Lizzy, was allowed to take a friend along.
Pieter, tried as much as he could to let Lizzy experience the love and sharing of a family with more children. Here Nicole Verhaar, got to travel along.
One of her friends was my first cousin Bertie Van den Munckhof. Her dad, my uncle, was a close friend of Pieter, from the photo-club, where they both were members of.
Also my paternal grandmother was a close friend of Pieter's Mom.
There were already many links between our families.
Personally I got to know Lizzy at the age of five, when I started working for the Practical Training College, called C.C.O., about Mushroom Growing. First and only one of its kind in the world and founded by Pieter. His book about Modern Mushroom Growing has been translated into eight official languages. He often got invited to be a speaker at international Mushroom Science Congresses and he always took his family along.

Above, Liz Vedder, is shown at the Botanical Gardens of Bogor, Indonesia.
She got to travel the world with her Dad! 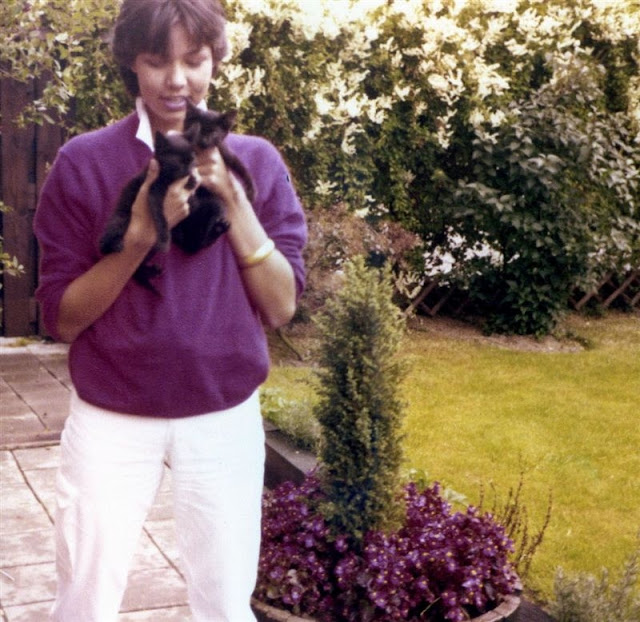 Liz is holding kittens at my home in The Netherlands, August 1981.
She always has been great with pets; that sure is a character plus! This is in Pennsylvania, April 1982.
Liz always loved horses and she just walked up to them, everywhere she went. 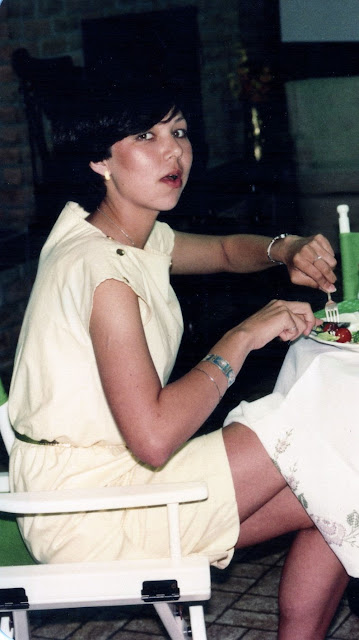 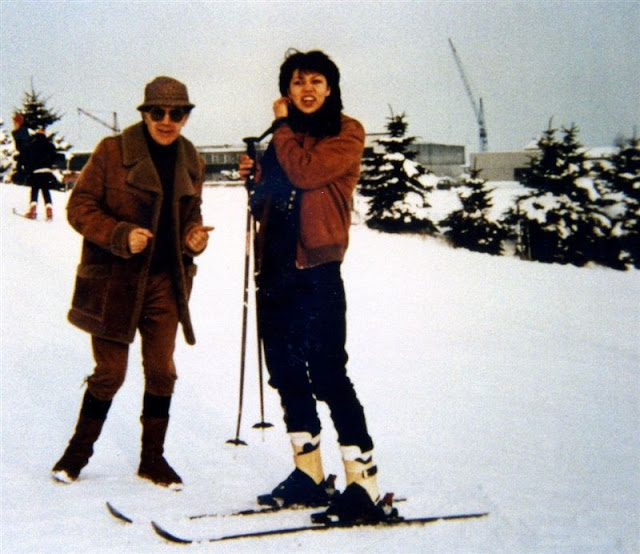 Above Liz is on her skies, while on vacation in Germany with her parents.
The last one before they did break up. Pieter had waited until Liz was already at college and had moved out of the home. It was August 29 of 1983, when we both immigrated to the US.


Continuing to pay for Liz' formal education at the Royal Academy of Arts and Design in Den Bosch and of course supporting also her adoptive Mom.
We both worked hard, as there never has been a single penny tax deduction as Liz did not study in the US, but abroad.
It sure was not easy, but we both felt proud for having given her the best education possible and as of today we still support Thea. Therefore it meant a lot when Thea once called to share her feelings about Liz when her would-be parents-in-law had complimented her on Liz' impeccable manners. She told Pieter: "I wish you would have been there but at least I want you to know; since you too had a large share in accomplishing this".
She did mail us a special post card taken in Horst, The Netherlands, from an ages old chapel with some kind words that meant the world to us: 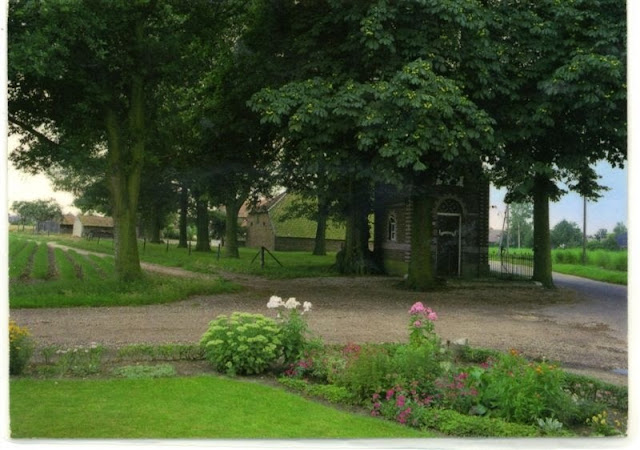 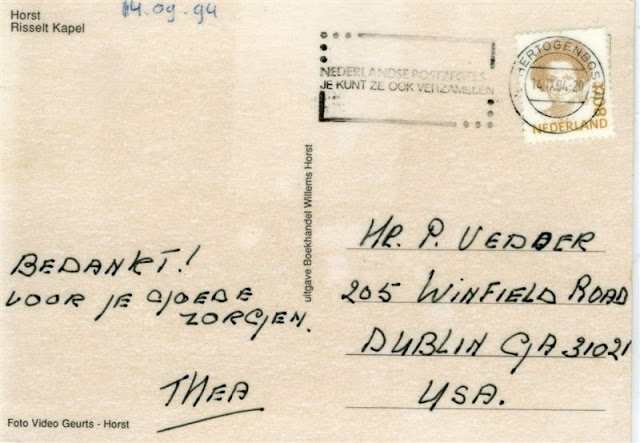 Meanwhile we went to Vancouver in British Columbia, Canada since Pieter would be the speaker at the North American Mushroom Conference.
After the events, I did look up my maiden name in the phone book. None to be found. There were lots of Vedders as usual. All of a sudden I thought about Liz being born in British Columbia so I did look for Jeurissen and there we found the one Jeurissen in the book. Pieter called and it was Thelma whom we thought would have died years ago as nobody could find her. But in the US and in Canada a divorced woman can keep her husband's name... we would never have searched for her by her married name. But she did meet us and since July of 1996 we've been very close to her and spent many hours on the phone with her during her decade long battle with all sorts of cancer. Also we exchanged quite a number of letters and cards which we've passed on to Liz. She was quite a lady and we both were thrilled when in 2001, Liz did visit her for the first time. That made her Mama Thelma so happy! 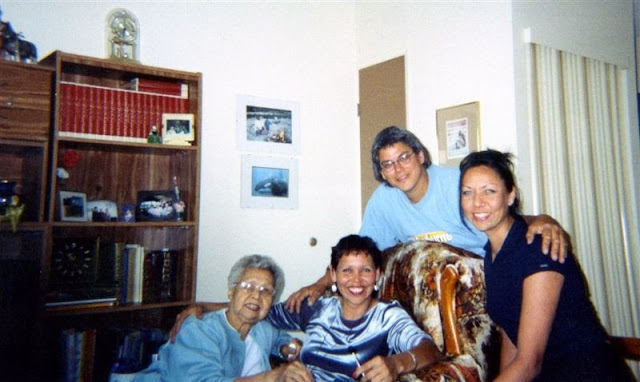 In Mama Thelma's own words written on the back of the following photos: The first day in Canada, James, Liz, Tracy (Mama Thelma's niece) and me. 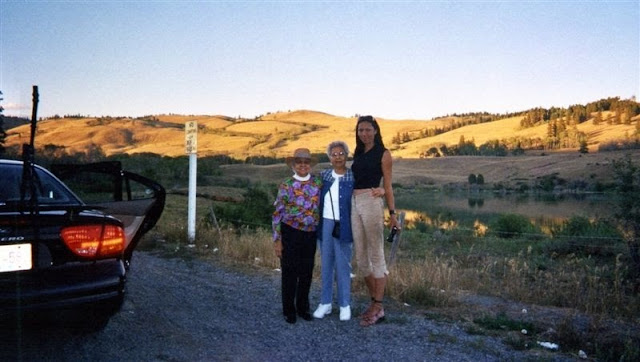 This was taken in the small town of Meritt; Liz, her Mama Thelma and aunt Ginny. 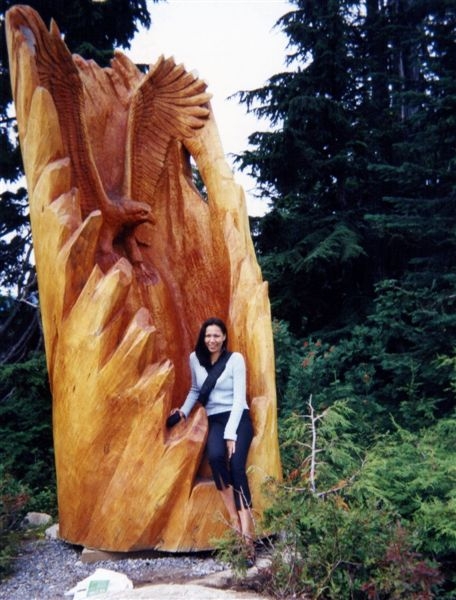 Mama Thelma took this photo of Liz at Grouse Mountain. Liz on the way to visit auntie Dorothy at Nanaimo. It was so windy on the boat ferry. 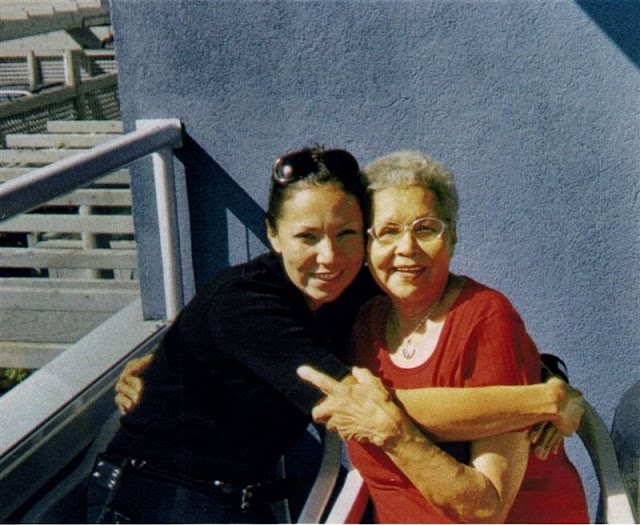 Their last morning together before leaving for the airport... back to The Netherlands.


Mama Thelma, as we used to call her always, died in September 2006.
Liz has been there shortly before she died.

From heaven she will be watching us!

Posted by Mariette VandenMunckhof-Vedder at 10:12 PM