Yesterday I did mention in my post that those chevrons, pointed at the particular cups in the end of my TV Interview's video, were wrong. So here I like to point out to you the visible differences between Coffee & Tea Cups. 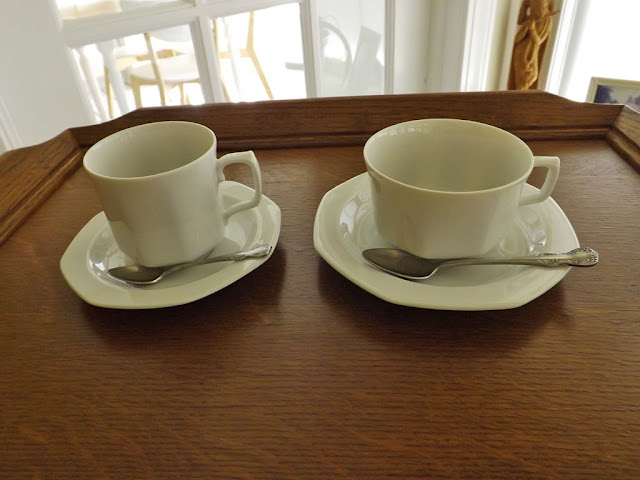 Sorry for the poor photos, because of the camera focusing in on the windows... I placed each time two cups on an oak tray, placed on a ceramic pedestal. LEFT you see a Coffee Cup and to the RIGHT is a Tea Cup!
To the left I also placed a smaller spoon than to the right. These cups are German Seltmann Weiden Mirabel in white.  Spoons are Gero Zilmeta 528 Menuet. 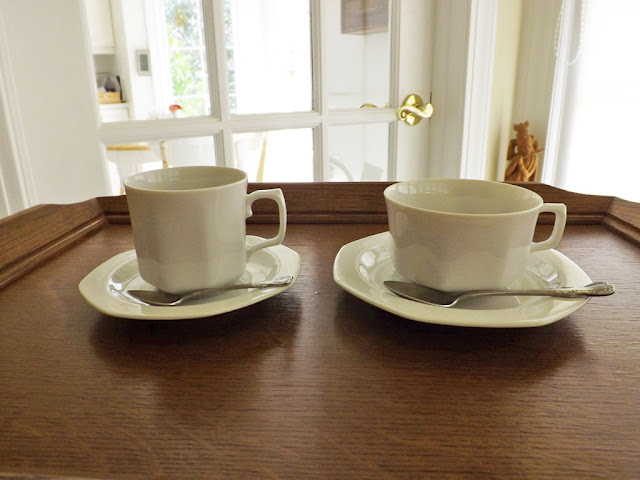 Frontal view of Coffee Cup to the left and Tea Cup to the right.
Europeans brew their coffee a lot stronger than people here in the USA and or Canada.
We do use a dark French roast, that also makes the coffee darker but always mild and never bitter.
Nowadays the famous Dutch JACOBS DOUWE EGBERTS coffee, since 1753, is widely available in the USA as well. 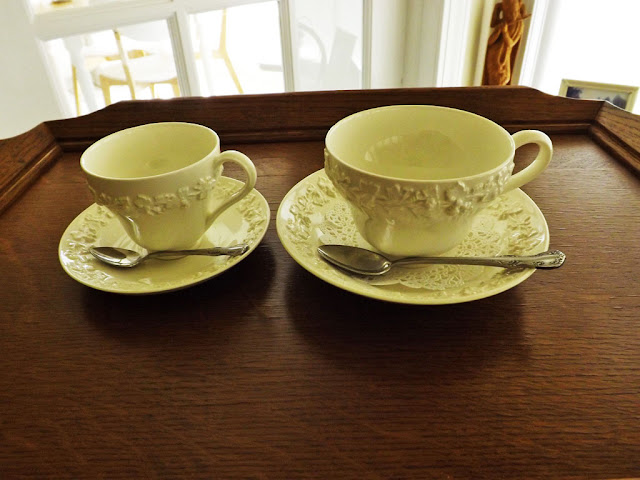 These I do use as Coffee Cups; demitasse and regular size Coffee Cups. What is your guess? These are more tapered down.
This is WEDGWOOD CREAM COLOR ON CREAM COLOR (PLAIN EDGE). Even Replacements Ltd. does not specify the difference. It names the one to the left footed demitasse and the other footed cup & saucer. 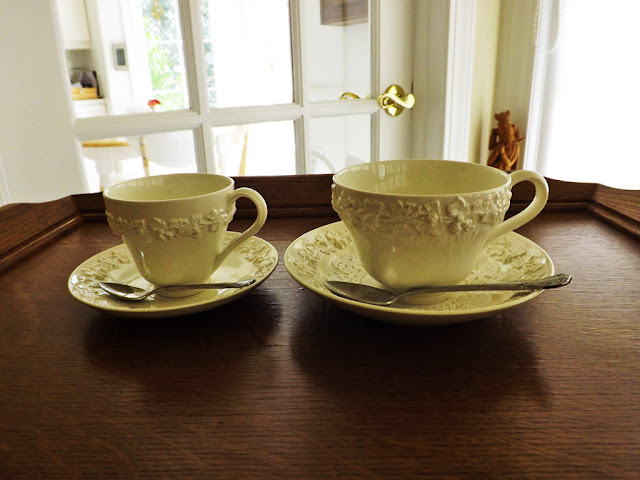 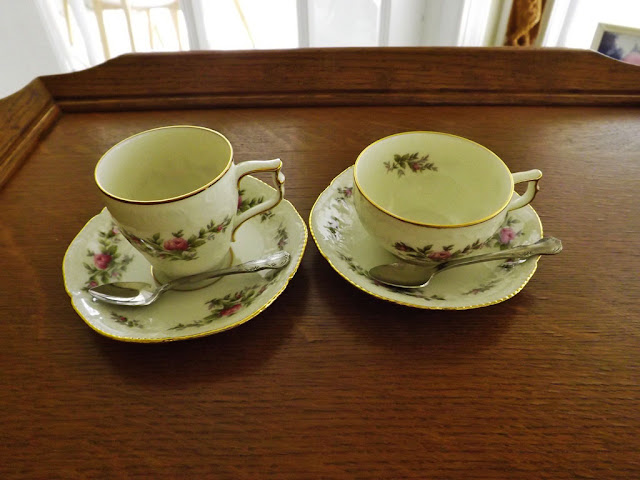 This again is easier to judge. To the left is a demitasse for coffee and to the right a demitasse for tea. The French word Demi Tasse means Half Cup. This is ROSENTHAL SANSSOUCI ROSE-IVORY (GOLD TRIM). 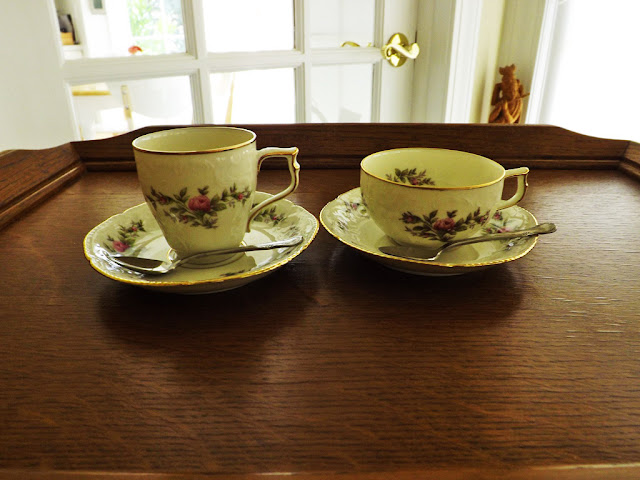 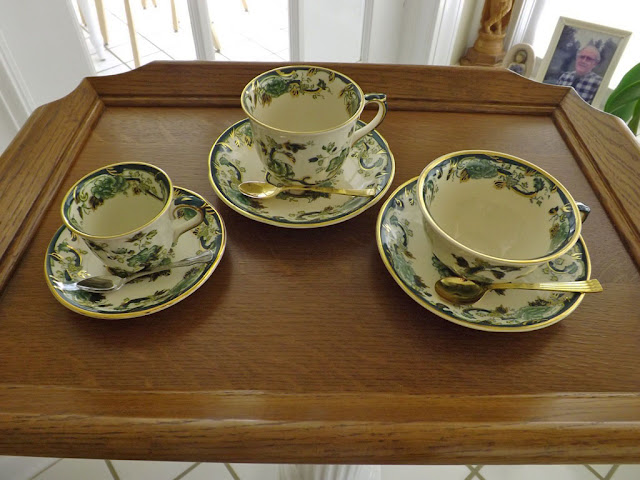 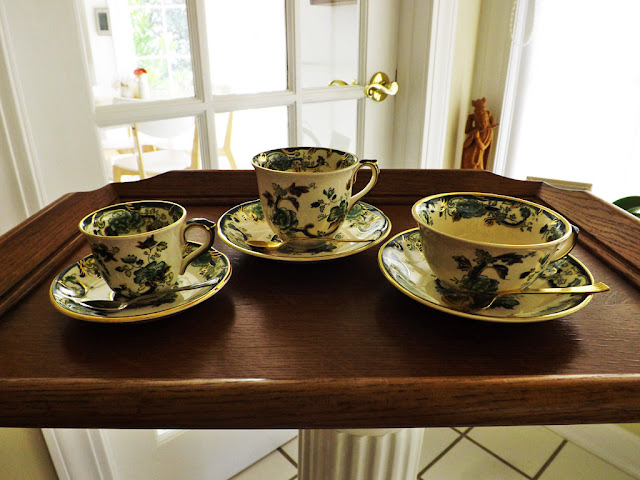 Frontal view of the demitasse Coffee Cup to the left, regular Coffee Cup center and regular Tea Cup to the right. I used a demitasse Gero Zilmeta 528 Menuet spoon for the demi and regular spoons in gold plate for the coffee and tea cups.
Christie's Mandalay by Masons 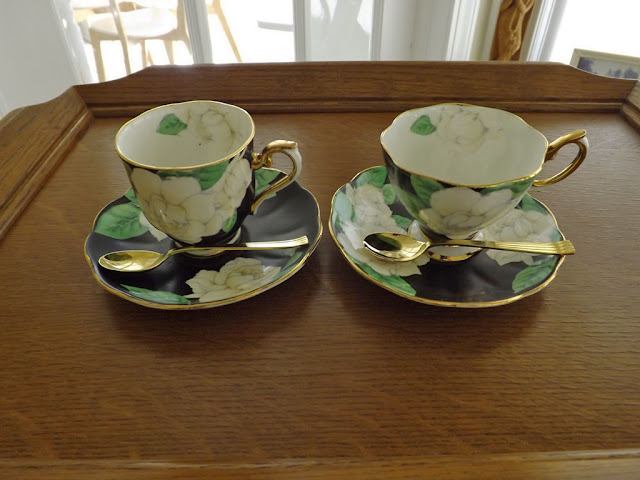 This one is again easy to judge. A demitasse Coffee Cup to the left and a demitasse Tea Cup to the right with regular spoons in gold plate. When I mean regular, it is NOT a regular American size spoon but a much smaller European size teaspoon. This is ROYAL ALBERT THE GARDENIA. 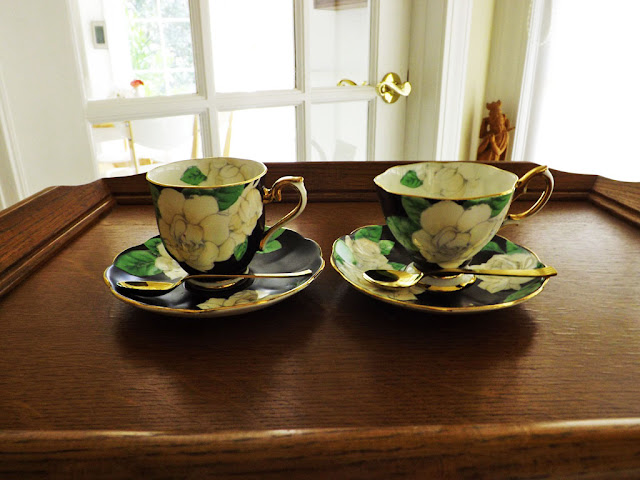 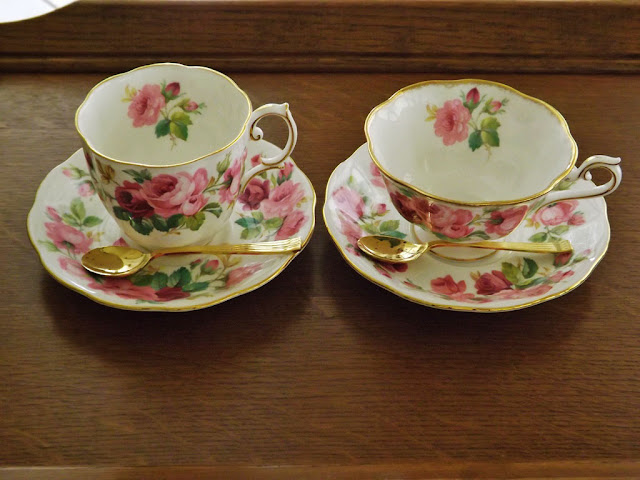 Again easy to guess: to the left a regular size Coffee Cup and to the right a regular size Tea Cup. Both with gold plated teaspoons. This is ROYAL ALBERT PRINCESS ANNE (BRUSHED GOLD EDGE). 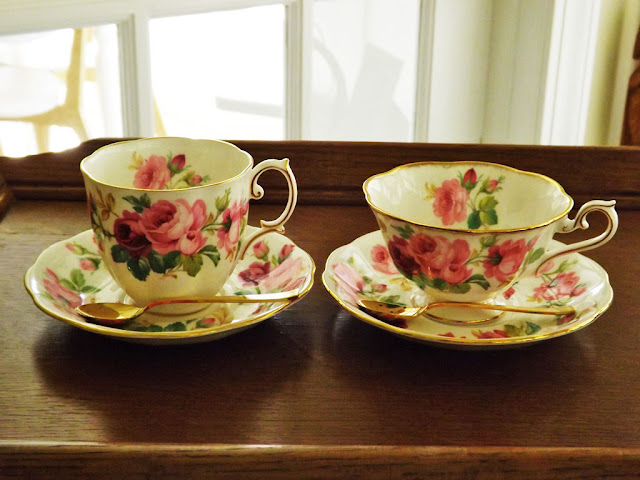 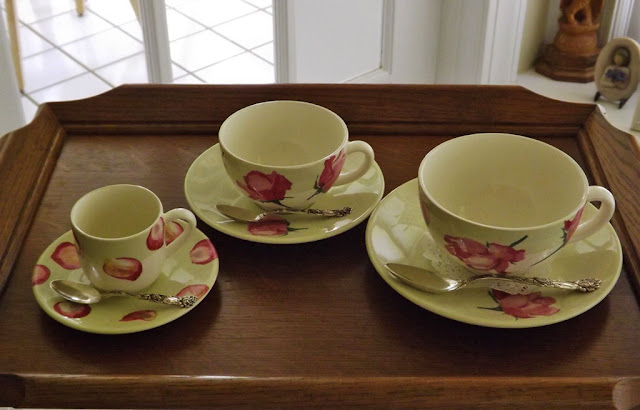 Again somewhat difficult to analyze... The one to the left is called an After Dinner Cup and the one in the center a Coffee / Tea cup. The one to the right is named a Breakfast Cup...  Guess we can either pour coffee or tea in them! This is French GIEN ROSE. 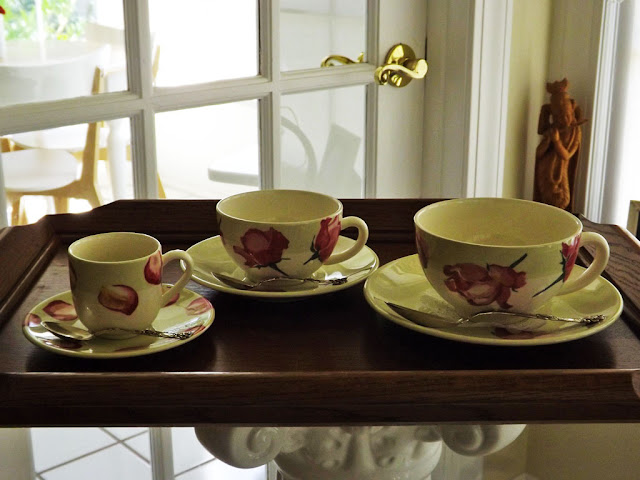 Frontal view of those three cups... Here I used two demitasse spoons from ALVIN BRIDAL ROSE and to the right a five o'clock spoon. 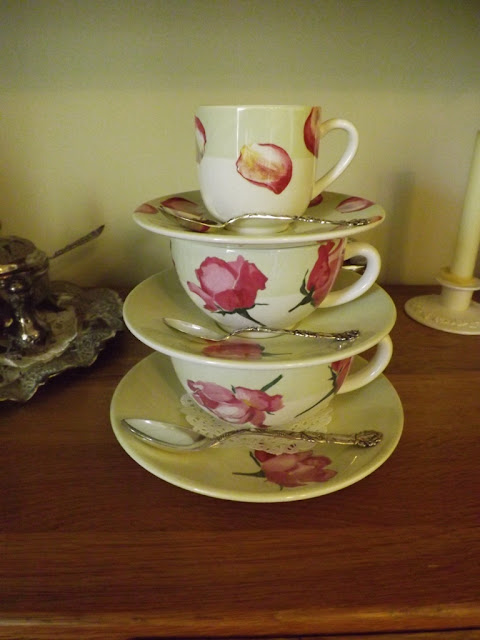 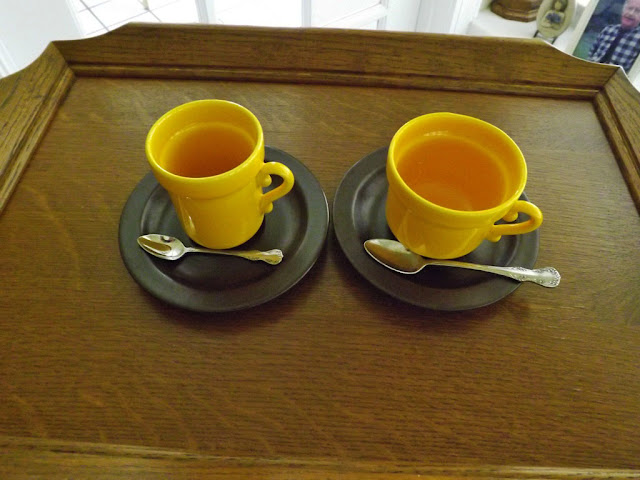 Though these are not tapered down I presume that the one to the left is a Coffee Cup and to the right a Tea Cup. This is from POTTERIE DE DRIEHOEK in Huizen, The Netherlands. Spoons are demitasse and teaspoon by Gero Zilmeta 528 Menuet. 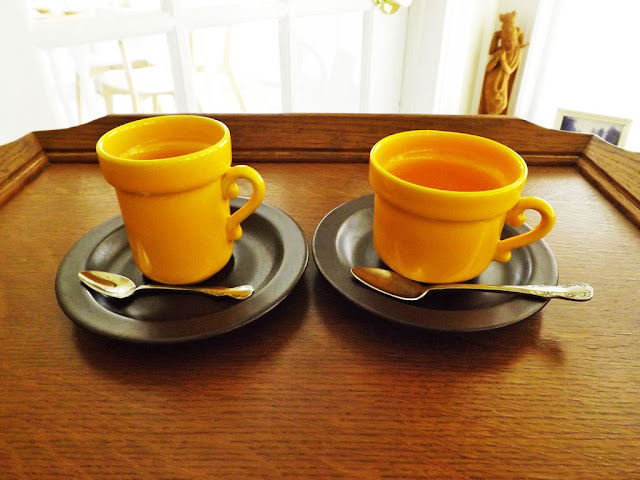 Frontal view of this Coffee Cup and Tea Cup. 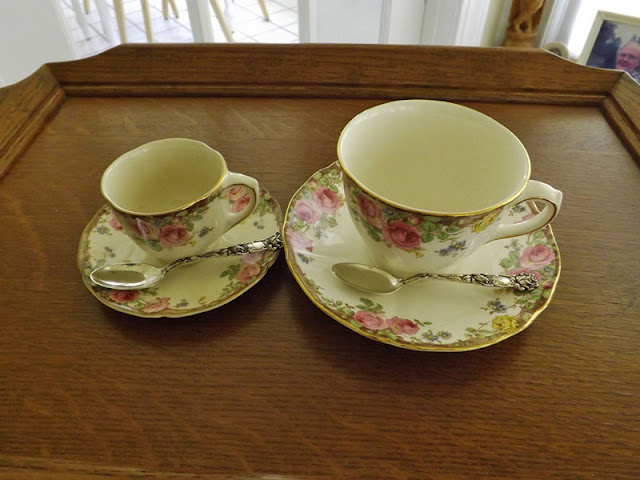 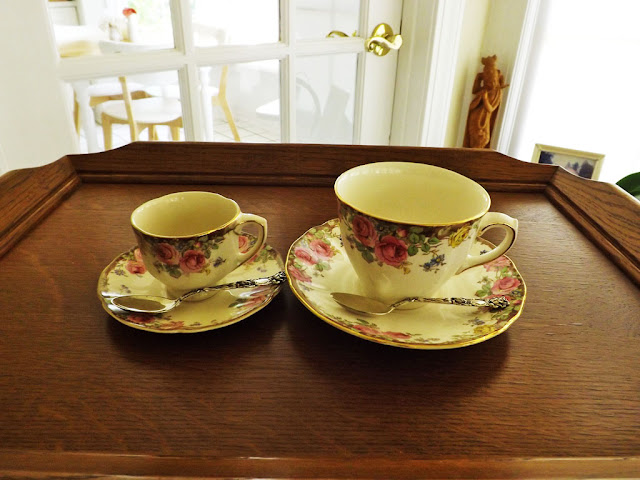 One last frontal view of a demitasse Coffee Cup to the left and a regular Coffee Cup to the right...
Now you also know what I am using when hosting a High Tea. We have quite a choice on china. Will show you photos from such a High Tea later. My idea is that more people are using Tea Cups than Coffee Cups. What is your take on that? You might be able to reflect on your own stock or maybe heirloom pieces that you got handed down.

Worldwide, it seems that numerous people look for the 'right' cup...
A total of 79,858 views so far.

Related links:
{My Etiquette Training Interview with WGXA.TV (FOX24/ABC16)} | yesterday's post (from WGXA.TV) by me referring to the cup differences in video
So, What's This About Coffee "Cans," Reggie? | previous post from Blogger Reggie Darling with interesting facts
{Our last Datura Angel's Trumpets and TEA with a Twist} | previous post by me, showing also Japanese tea
Learn from Mariette | Classes used to being offered by Mariette's Back to Basics
The World in your Teacup | book by Lisa Boalt Richardson

Posted by Mariette VandenMunckhof-Vedder at 7:01 PM