It was in June of 1969, when I had read the weekly local paper 'De Echo van Horst' and spotted an advertisement from the practical Training College for Mushroom Growing. So before lunch, I did go over there to apply for the job; and got it. The founder and principal, Mr. Vedder, told me that with my long hair I reminded him of his daughter Lizzy... Later I got to know that cute little daughter of age five. Well, I loved the job, attended also the very first ladies course ever given on the subject of mushroom growing. That was in 1970! Sounds like ages ago that women were not considered to do the very same things as men do... Mr. Vedder turned out to be one of my most favorite teachers. Over the years, thousands of students would agree with me on that! His book, translated into eight official languages, has often been called the Mushroom Bible. It is still available in print in Spanish, as well as in English, at least here in the USA and in Spain. He wrote his first Dutch edition in 1961. And the new English version: modern mushroom growing 2020 harvesting available worldwide.
There certainly was a mutual sympathy but nothing else. As I've mentioned before in the blog: {Our Daughter Liz}, that my first cousin Bertie was Lizzy's friend; my paternal grandmother was Pieter's Mom's best friend and my paternal uncle was Pieter's friend at the photo club... I had no inkling that fourteen years later I would become his wife!
Up till 1980 I didn't even know his first name as we always referred to him as Mr. Vedder...

Okay, let's pull the curtain of that special year 1969 and have a look: 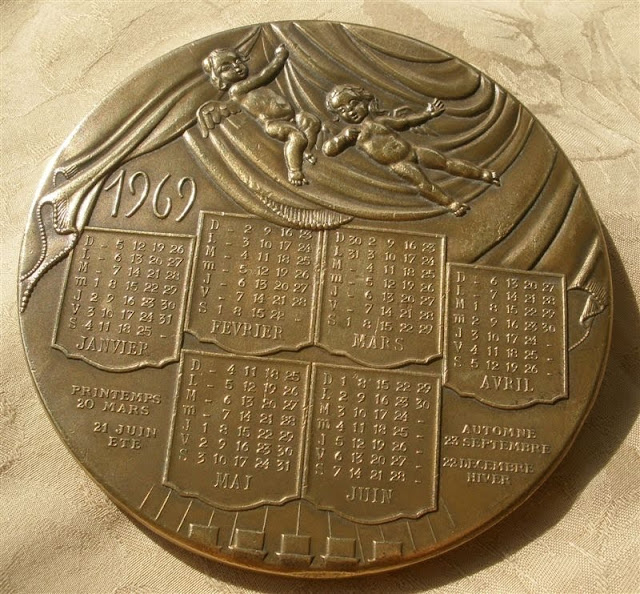 Angels are my favorites and on this huge 3.75" (9.5cm) bronze coin they playfully open the curtain ~ so the year can begin! Famous French Engraver G. Simon, designed it and he also had become instantly famous with the design of the 50 cents (centimes) coin for Prince Rainier and Princess Grace of Monaco. That made him become the Royal Engraver! He has done numerous coins.
My angel coin is in French, listing the beginning of Spring; Summer; Autumn and Winter. As well as the dates of Pentecost and Christmas.
Things have changed in 41 years! 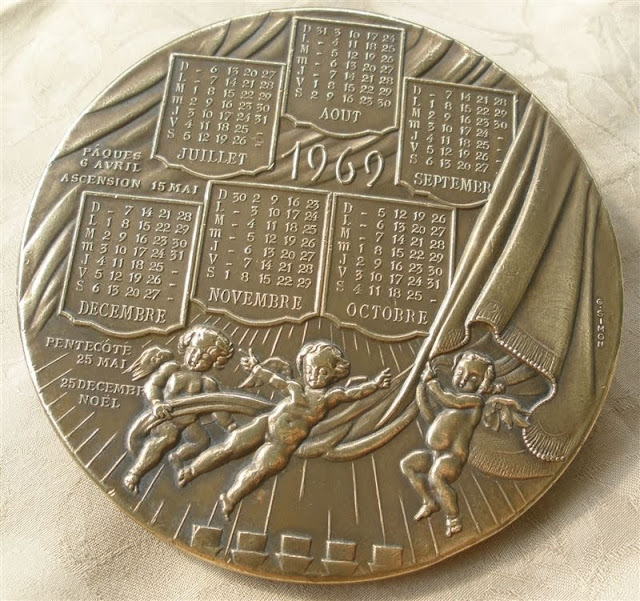 As the angels pull the curtain at the end of the year 1969, let's have a look at some of the highlights since then: 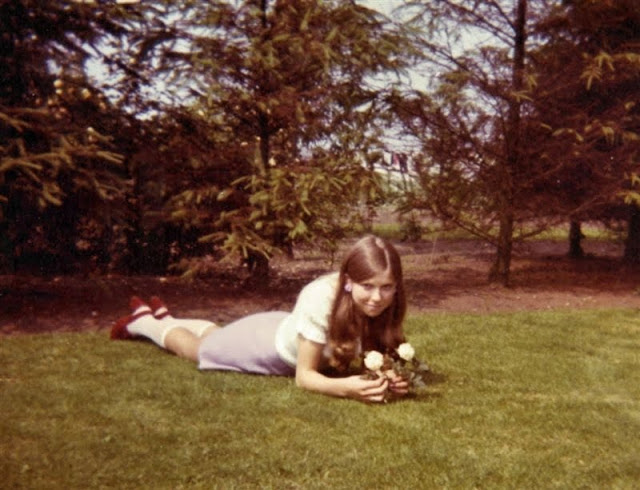 That's me with the long hair at that time... loving roses already! Some antique French roses from an elderly lady that I helped out for some pocket money at the time. 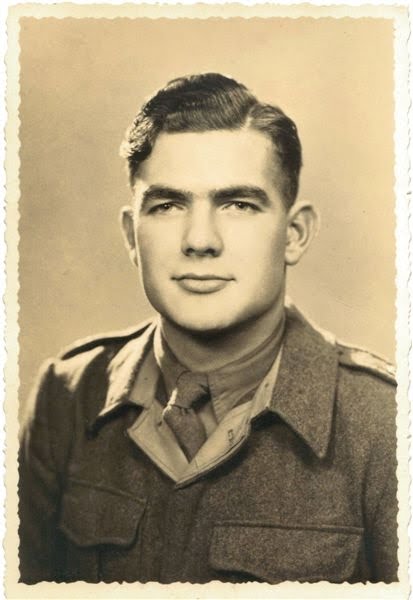 Pieter at the same age as I am in the above photo... in the Dutch military. 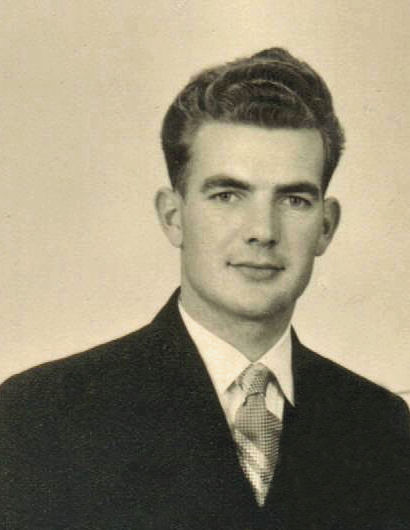 Pieter a couple of years later with a head full of hair... 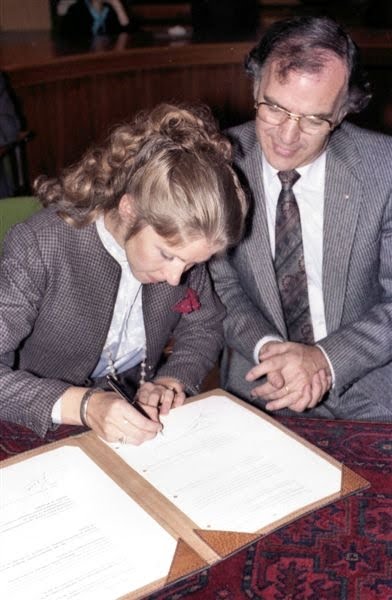 Our civil wedding at the City Hall in Horst aan de Maas, The Netherlands 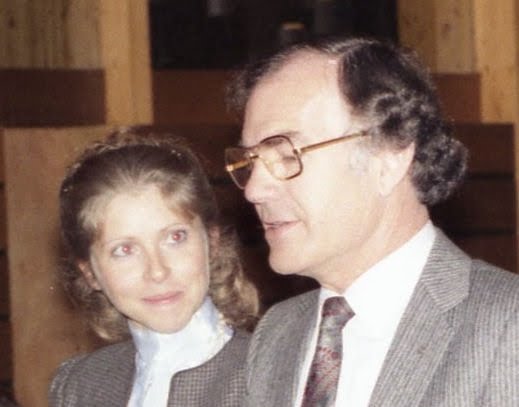 Happily married, regardless the jet-lag as we landed the day before from a flight back from Atlanta, Georgia USA to The Netherlands... 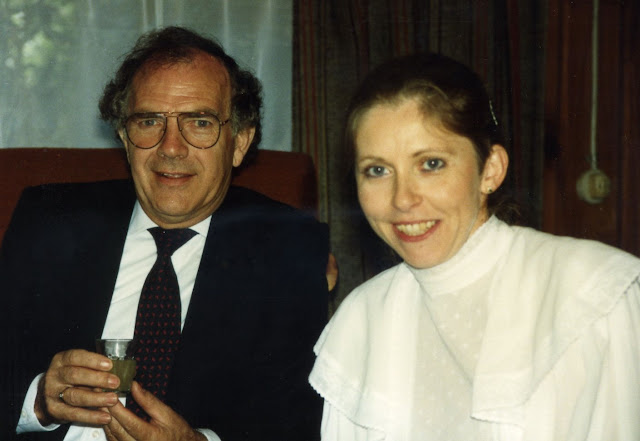 After our Church wedding in a parish near Osorno, Chile
Wearing my Laurèl, Escada lace blouse.

Honeymoon in Chile, looking into Argentina. I am proud to have readers from both countries! 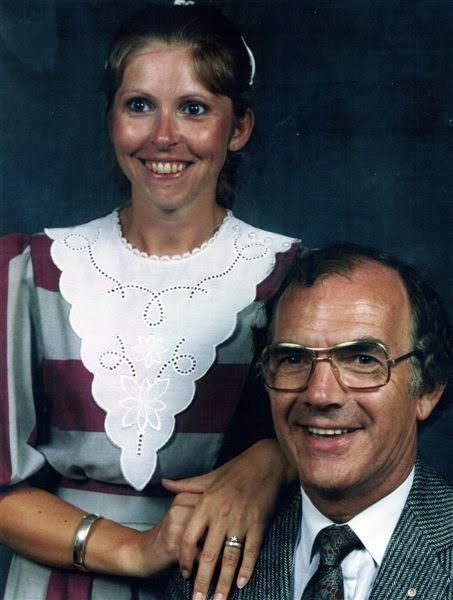 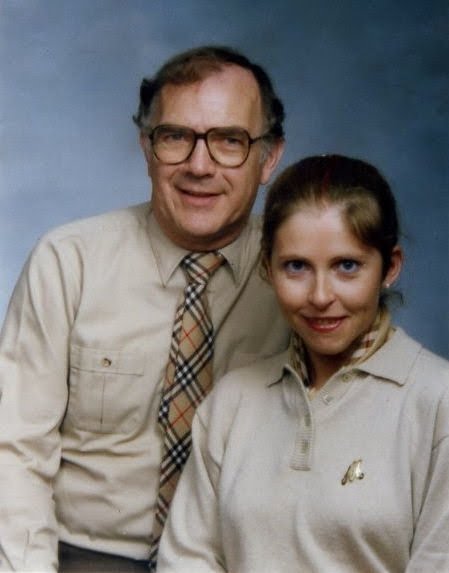 Pieter wearing his wool Burberry tie and I the silk Burberry plaid scarf. 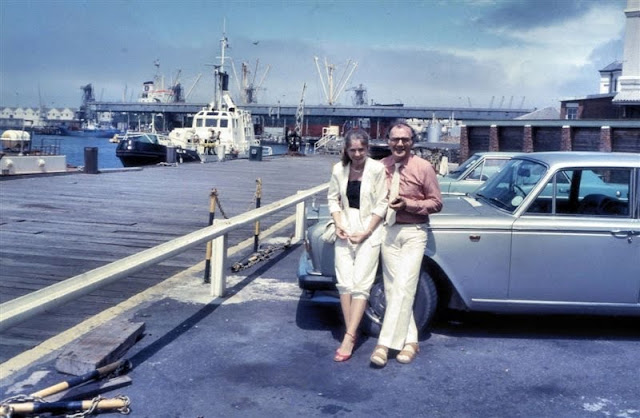 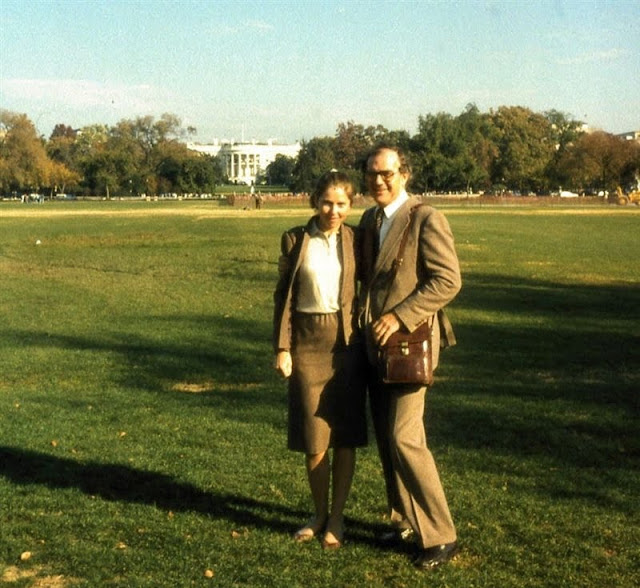 In front of The White House, Washington DC 1987.
Pieter in his Burberry suit. 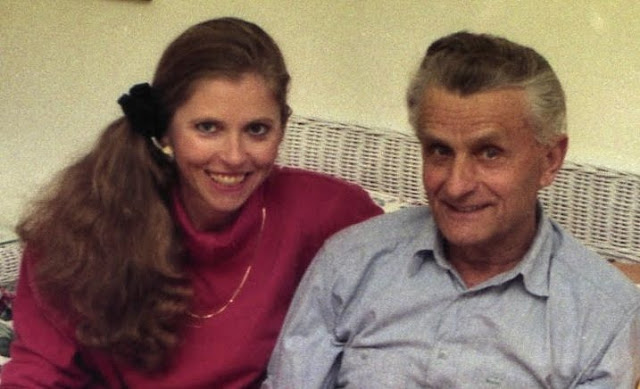 After having lived and worked in Pennsylvania and Italy, we moved back to Georgia, USA into our new build home and my Dad from The Netherlands helped us move in. 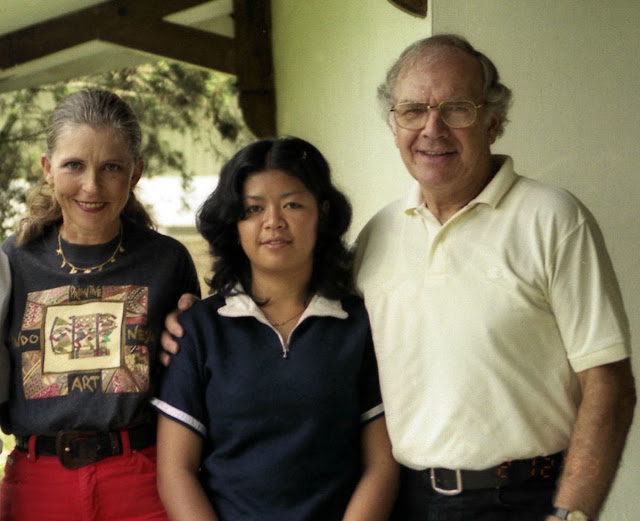 With our foster daughter Anita, in Indonesia where we lived and worked in Central Java. 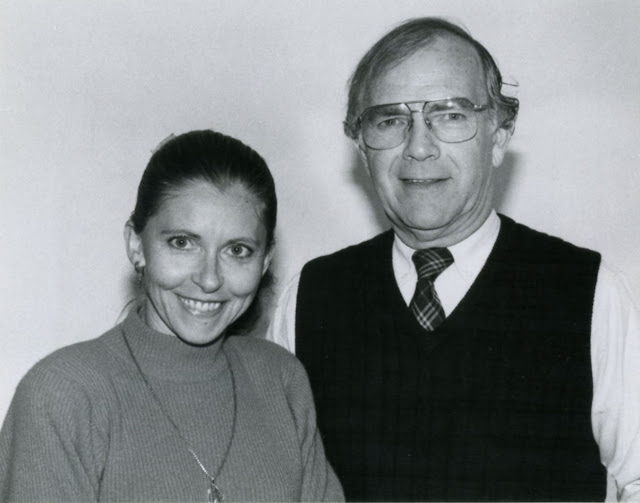 Photo taken for the book: A Profile of Dublin & Laurens County Georgia

where our story appeared. 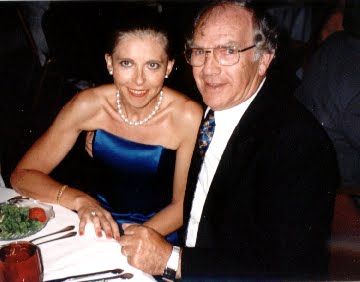 At the banquet of the millennium Rotary District Conference.
Wearing a silk Escada top with Majorica pearls. 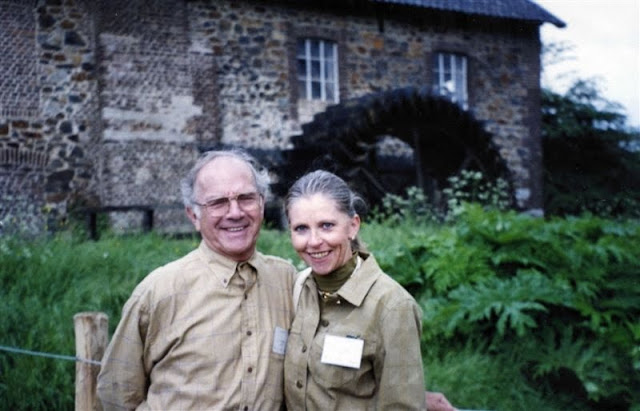 Trip to the Geuldal in South Limburg (my former Province), The Netherlands during the May 2000 Mushroom Science International Congress.
Wearing my Laurèl Escada suit with top. 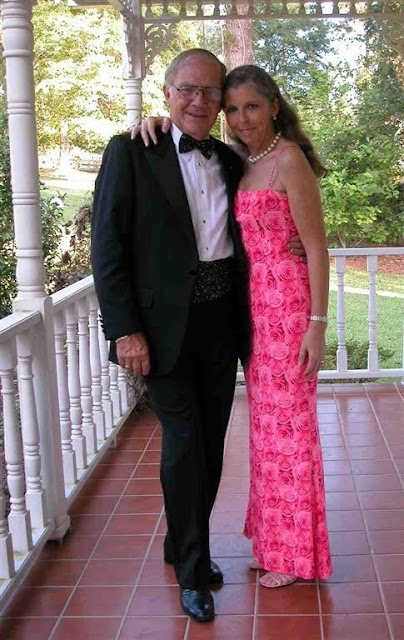 Even get to wear my Dirndl to go to the Oktoberfest that was held bi-annually by our best friends Col. John A.Whigham and Dr. Rebecca Whigham. 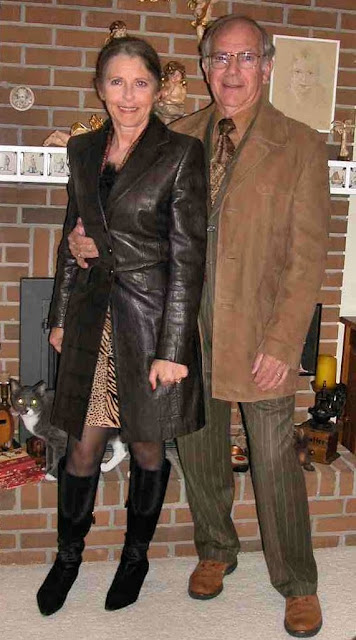 Picture taken by our foster daughter Anita after midnight Mass on Christmas Eve. Spooky our cat is in the picture too, on the left of me... he passed away because of heart-worm!
Wearing my Escada calf hair skirt and leather coat with calf hair boots. 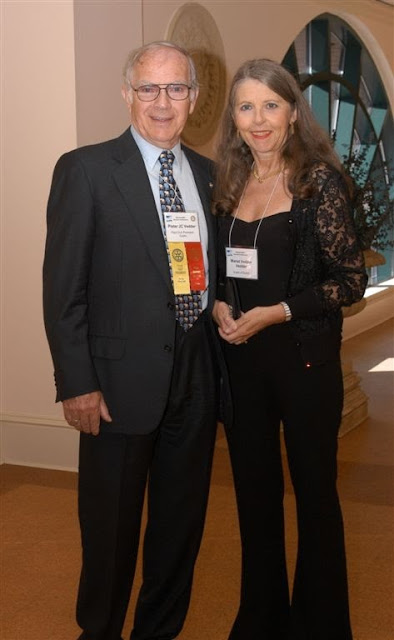 Again for a reception of the annual Rotary Club's District Conference. Since we no longer are International Consultants we at least get to go! We missed so many opportunities while being abroad someplace else... weddings of friends and such.
Pieter in his Ermenegildo Zegna suit and I'm in Escada. 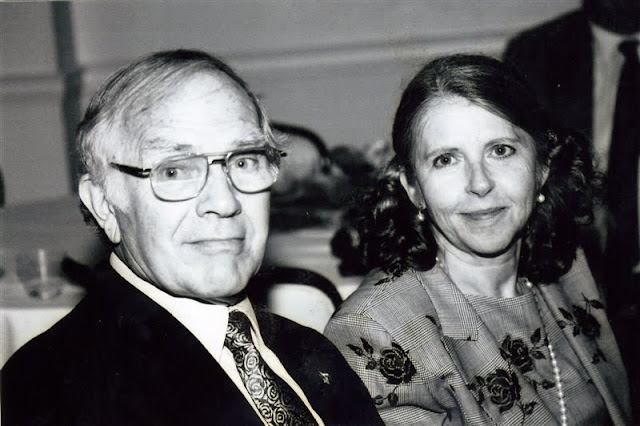 This picture is taken at a wedding in Dublin, Georgia.
Pieter's matching silk tie with gray roses with my Escada dress and jacket with rose embroidery and Majorica pearls. 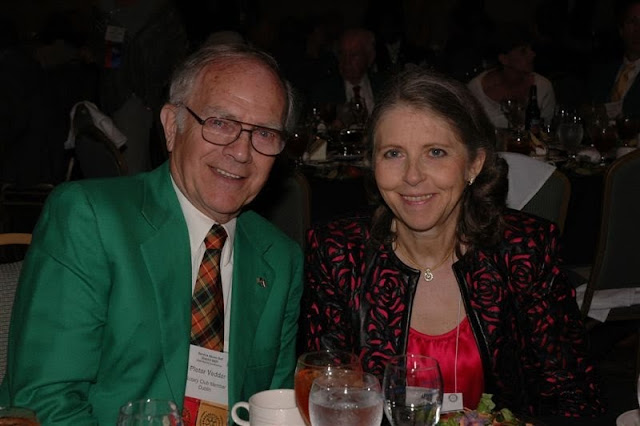 Another Rotary District Conference banquet where they always ask for wearing the 'Dublin' green jacket. Got Pieter a Brioni 30% silk with 70% cashmere jacket from Neiman Marcus Last Call that is a brighter green than they wear here. The Dublin green jacket we once took to the Rotary Club of Dublin Viking in Ireland to the their Club meeting. When they asked what an ugly color green Pieter was wearing we got cured! They were not in agreement in Dublin, Ireland with that being their Irish green. Indeed, from my fashion education I know better so I've taken care of that one.
Wearing my favorite Escada leather jacket with rose embroidery cut work on silk with silk top. 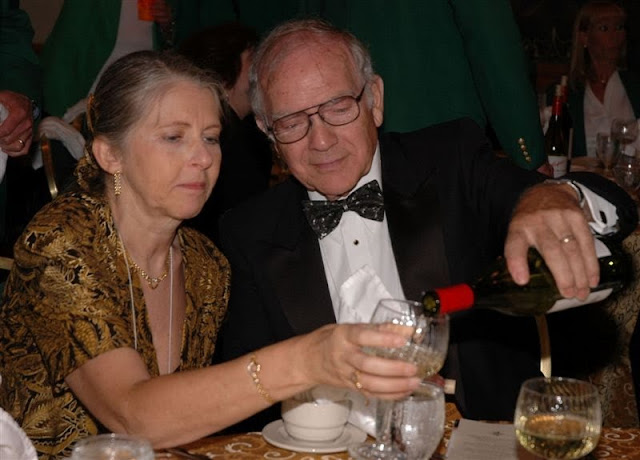 Anyway, Pieter looks a lot sharper in a Burberry tuxedo than in the green jacket! I am wearing a silk batik top that I've made from an Indonesian formal shawl, being hand painted with gold. Added frogs closures (Brandenburger sluiting in Dutch or Brandenbourgs) that I found in Spain while on a tour there. Lined it with black silk lining from my favorite West Coast specialty store (HUGE!) in San Francisco Britex. That are the perks when you travel the world; you find all the luxury that is out there and happen to come upon the most unique stores... For those of you that sew or design, check out Britex Notions at the very top from their home page.
Let's end with this and toast to many more happy years in good health!

Posted by Mariette VandenMunckhof-Vedder at 1:17 PM