During a sight viewing afternoon tour, the wife of the I.S.M.S. Congress organizer in Braunschweig, Germany told me that the  Professional Interpreter could not be present... She said, but you can help us out! Sure I am fluent in German but...
What was I thinking when saying yes to translate the speech from Madam Burgomaster into English, Jacques Delmas would translate my English into French... both of us standing behind Madam Burgomaster at the ancient City Hall. 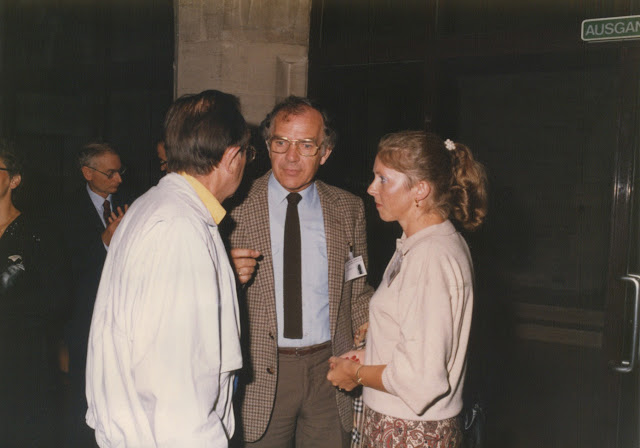 Here I am, to the right and Pieter center AFTER the disaster... YES!
Without any script and an obvious inexperienced Madam Burgomaster, that went on for about half a page. My train of thoughts, trying to memorize + translate could not keep up with that.
Back then, I did not have the courage for stepping forward and tapping that lady on her shoulder and saying: 'Please no more than a couple of sentences at a time, otherwise I loose track!'
And all that, in front af some 500 International participants of the ISMS Congress... wanting to just vanish!
International Society of Mushroom Science
That was on Monday, September 21, 1987. 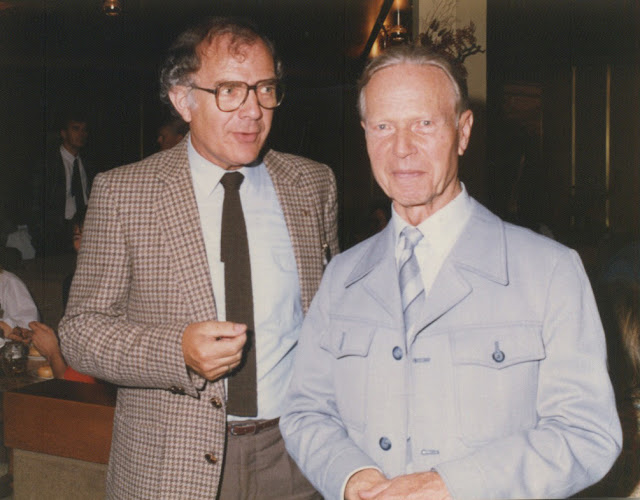 Husband Pieter with Walter Huhnke whom I mentioned in my previous post: 1967 Pieter at Max Planck Society Germany's Most Successful Research Organization 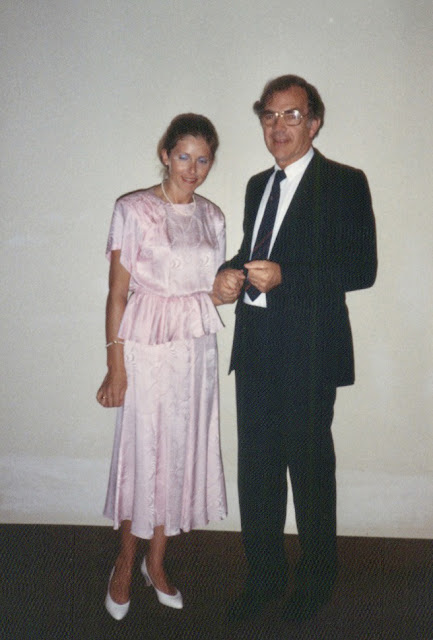 Friday evening, September 24, felt more relaxed... nothing to interpret here!
Just enjoying a formal Banquet with the other participants without any lectures or speeches.


{My Own Design of Brass Mushrooms} | previous post about my sales at the ISMS Congress
{XIIth ISMS Braunschweig, Germany Plate of 1987} | previous post by me
Posted by Mariette VandenMunckhof-Vedder at 3:10 PM 37 comments: Links to this post 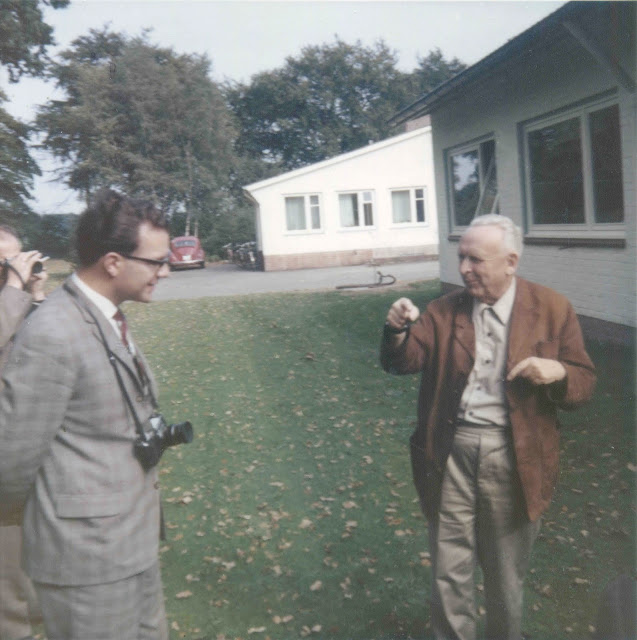 Pieter is seen to the left, while Professor Reinhold Von Sengbusch is giving some Fatherly advice to a young Pieter.
~
Professor Von Sengbusch who also did the breeding for the famous Senga Sengana strawberries, named after him!
Even my Dad grew them, when I was a child, and we had women coming in to harvest them. Fond memories...
~ 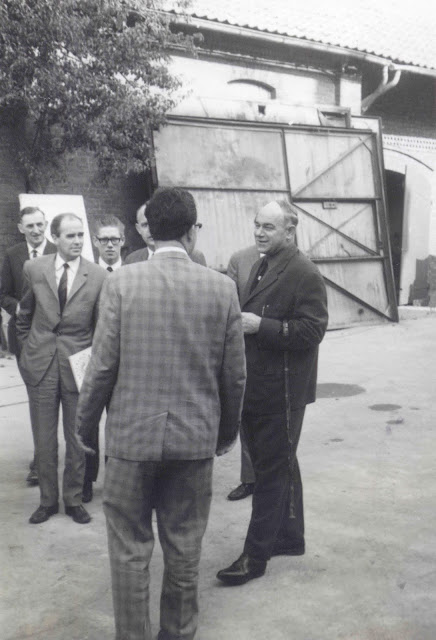 Pieter with his back towards us and to the right is Ferdinand Dohme, who later became a large mushroom grower in Germany. We had dinner with him, his wife and son at Regensburg's, Conference - see link below.

Most of these names would be listed over the decades at the I.S.M.S. Congresses held all over the world.
I.S.M.S. for: The International Society for Mushroom Science.

Pieter just stated that back in those days, he managed to travel to foreign countries on his own and NO GPS yet!
How in the world did we ever manage without?!


Related post:
Lecture by Pieter and Stay at UNESCO site Regensburg during German Mushroom Conference | previous post where we had dinner with Ferdinand Dohme and family...
Posted by Mariette VandenMunckhof-Vedder at 8:00 PM 26 comments: Links to this post

The Living Mushroom Cave in Le Puy Notre Dame on the Loire, France

Just have to share this unique story with you and the world...
Open for Tourism and as restaurant and shop!
We met the person Jacky Roulleau who is running this!
See link at the very bottom under final photo... 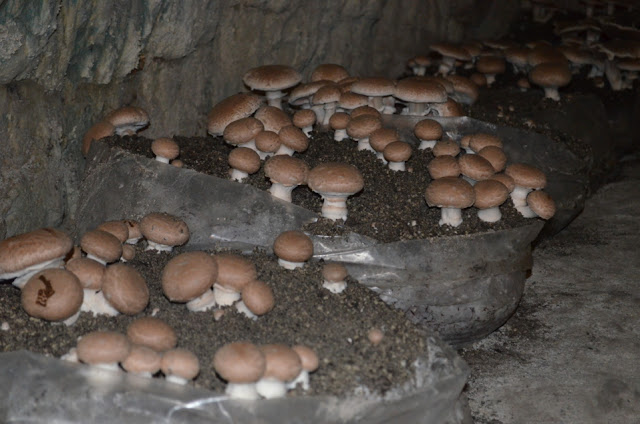 In French: variété blonde du champignon de Paris
This is the brown variety of the champignon de Paris, what we call button mushroom or Agaricus
Okay, on Sunday, January 8 of 1989, husband Pieter left via Philadelphia, Pennsylvania (we lived in Shillington, Pennsylvania at the time) to Kalamazoo, in Michigan for meeting with 6 French men. One of them was Jacky Roulleau.
They went to the Glenn Farm, one of Campbell's mushroom farms on January 9 and to the Brighton Farm on January 10.
On January 11, Pieter flew back to Philadelphia with lots of delay, his 1st time with Piedmont airlines...
In the evening Pieter did take me along to the Sheraton hotel in Reading to meet with the French men. We all went to a Mexican restaurant for dinner together. 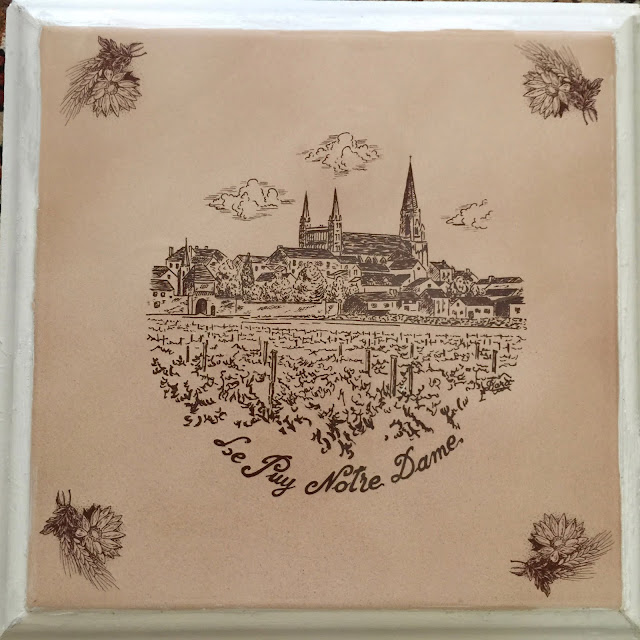 We received a tile from Le Puy Notre Dame with it's Church
Also a bottle of Fiji eau de toilette and a Taste Vin... 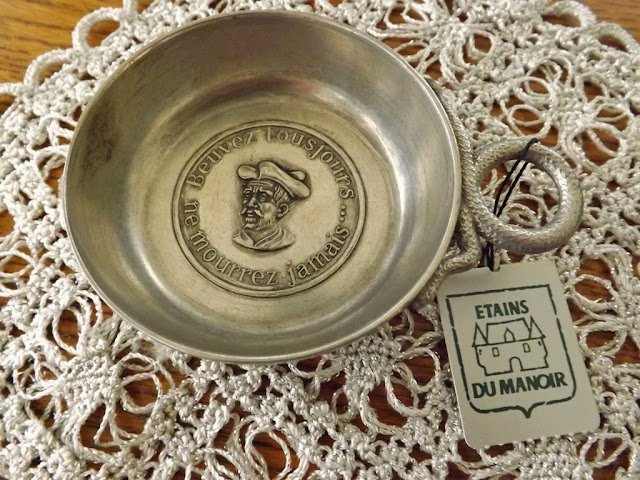 This French Pewter Taste Vin from ETAINS DU MANOIR was a gift from our French mushroom colleagues.
Inside you read the French Wine Quote: Beuvez toujours ne mourrez jamais.
Drink always and never die. Widely attributed to François Rabelais.
Below post is a link to my previous post for learning more about this piece... 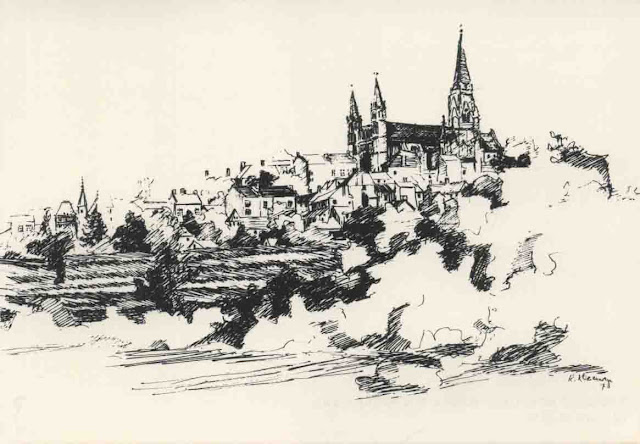 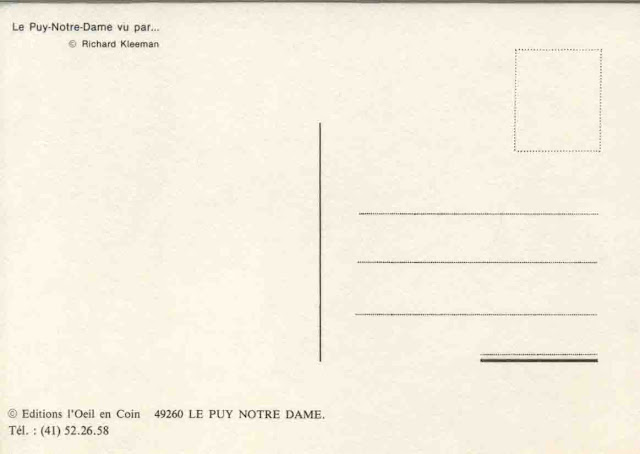 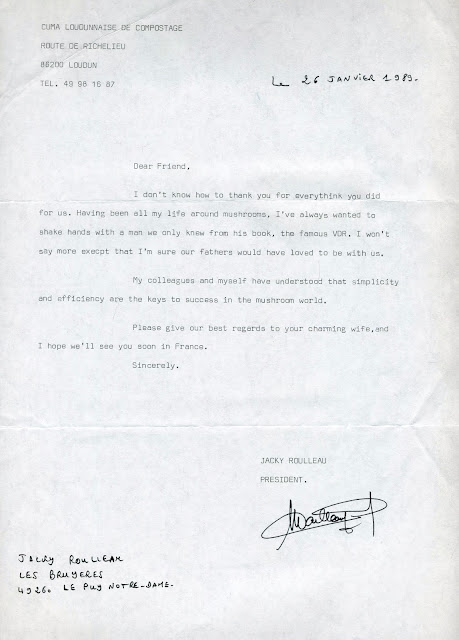 On January 26, 1989 Jacky Roulleau wrote a very nice letter:
Dear Friend,
I don't know how to thank you for everything you did for us. Having been all my life around mushrooms, I've always wanted to shake hands with a man we only knew from his book, the famous Vedder.
I won't say more except that I'm sure our fathers would have loved to be with us.
My colleagues and myself have understood that simplicity and efficiency are the keys to success in the mushroom world.
Please give our best regards to your charming wife, and I hope we'll see you soon in France.
Sincerely,
Jacky Roulleau 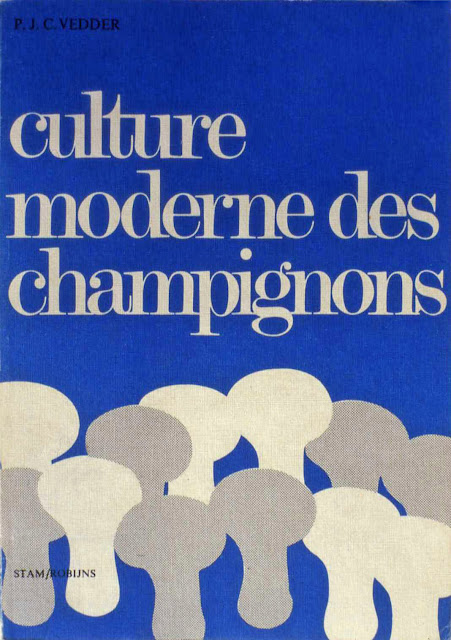 CULTURE MODERNE DES CHAMPIGNONS is the book Jacky was referring to.
Pieter's French edition, out of 8 official languages being published.
~
We met again on May 20, 1989 during the Tecno Mico in Verona, Italy where Pieter worked out a construction design for them and Gerard Derks built it in France, in late summer.
At that time we already lived and worked in Italy and on May 27, Gerard and his wife Pauline Derks came to dinner at our apartment and they delivered 4 bottles of French Chinon wine from the French men! Surprise...
~
Small world and now Jacky and his son Julian, are running their business of mushroom growing inside the cave and opening it for tourism from end of March through early October. 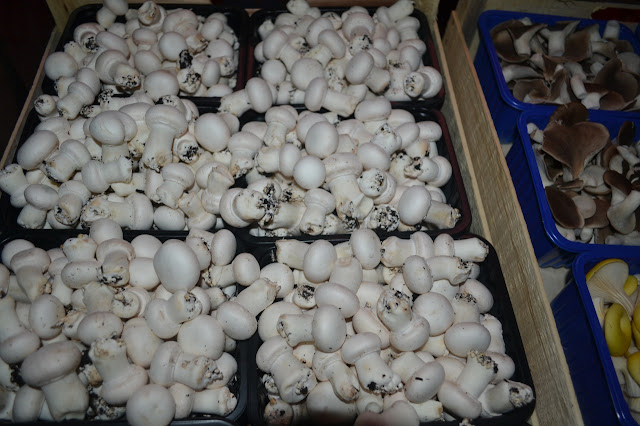 The Living Mushroom Cave - Tourist Attraction from end of March till early October in Le Puy Notre Dame on the Loire, France click link
Year round they sell their product and also other varieties of mushrooms they grow inside the cave.
Regional restaurants buy their produce and prepare delicious food, a wonderful way for visiting and learning!

Look at those broad stems as a good mushroom quality criteria...