Dad is One Year in Heaven Now

On June 30 it will be one year since Dad went to Heaven for joining my Angel Sister and Mom, who died on January 27, 2015. 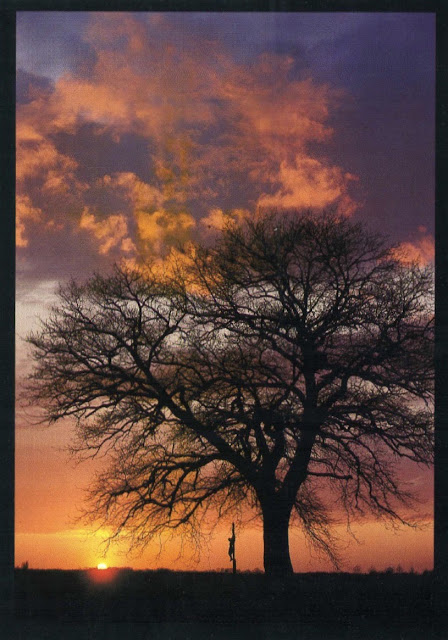 1982 Photo of huge Oak named in our dialect 't STRUUKSKE
Brother Martin made this photo and together with brother Piet, they created a Calendar for 1983 which got printed with photos and information about the beautiful local nature.

Dad's handwriting where he stated that after Easter 1940, he got to serve at a Homestead from P. Janssen-Tielen in the hamlet of Veld Oostenrijk in Horst, The Netherlands.
He stayed there till Easter 1942.
Easter time was always the time (planting season I guess...) for changing location while in servitude.
There he got to know Mom, who was in servitude at the Geurts Homestead, just a couple of houses apart.
In August of 1941 they met for the very first time...
This big oak was the spot!
There was the beginning of a long and blissful relationship... 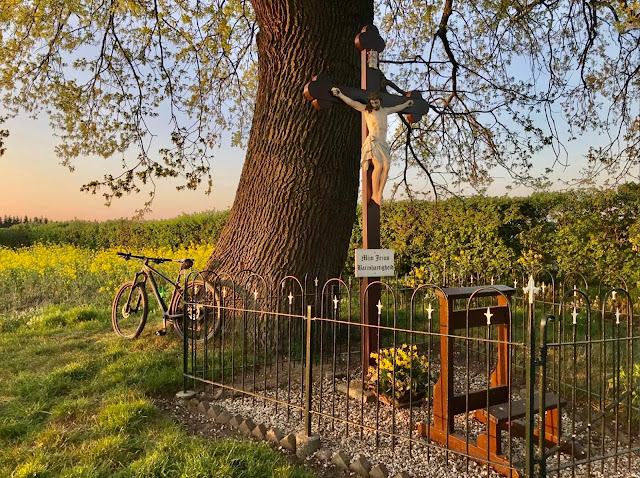 My Sister-in-love Wilma Van den Munckhof made this special photo on April 17, when she went biking together with daughter (niece) Caro.
It shows so beautifully the entire area.
The beautiful fencing has been placed by: Pieter Jacob (Sjaak) Van den Munckhof (1896-1995 Horst, Limburg, The Netherlands)
He was a far relative as there are numerous Van den Munckhof in Horst
~ 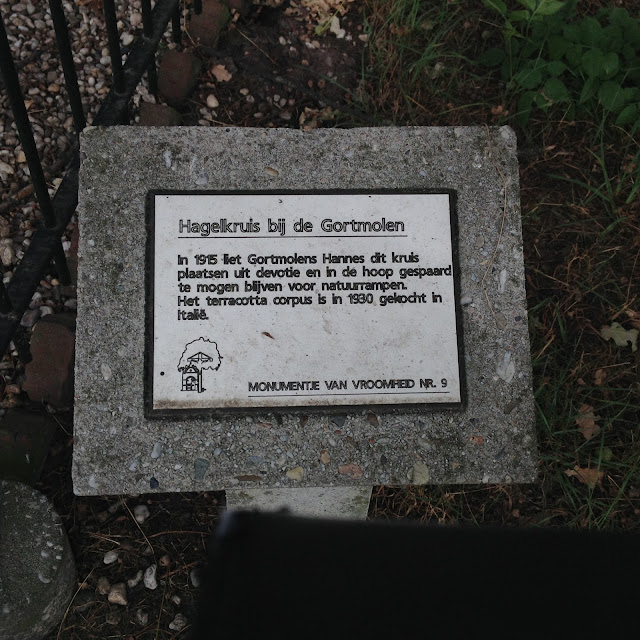 Photo by Geert Van den Munckhof used by permission from his blogpost: Eiken en eikels...
Hail cross at the Gortmolen
In 1915, Gortmolens Hannes had this cross placed out of devotion and in the hope of being spared from natural disasters.
The terracotta corpus was bought in Italy in 1930.
MONUMENT OF PIETY NO. 9
~
There are several field crosses in my birth town! 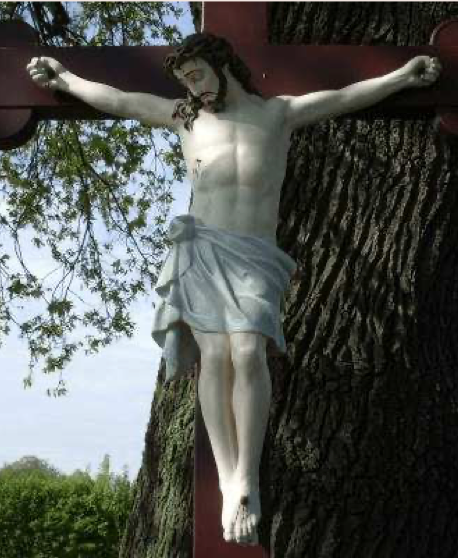 1930 Corpus from Italy
The sign below the Corpus reads:
My Jesus Mercy
Photo from blogpost: Klein mysterie 557 – Christus' lendendoek (Small mystery 557 – Christ's loin cloth)
~
My eldest brother Martin, the photographer of the 1st photo, suggested that Mom & Dad's ashes would be dispersed of right here, at this historical spot.
So five of my six siblings met there on Holy Saturday and it was a very warm and meaningful gathering; however complying still to social distancing...
Only my younger sister did not join for whatever reason.
Wish I could have been there!
~
This made for a perfect Easter!

See short video about Estate de Gortmeule: Jac Hanssen - De Gortmeule mien Landgoed
Related link:
Our Dining Room where we have a large format of Martin's photo hanging next to the cross from Pieter's Parents
Posted by Mariette VandenMunckhof-Vedder at 8:00 PM