From Santa Cruz to San Francisco for the Weekend

This was our PLAN to begin with, a weekend together in San Francisco... 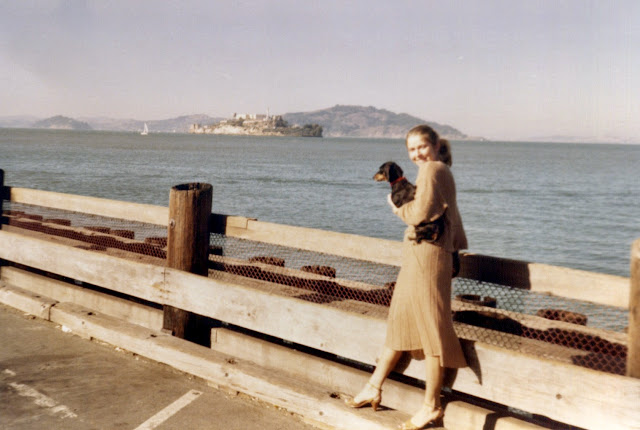 With my Mauzie girl at the San Francisco Fisherman's wharf...

We had checked in at the Hilton San Francisco Union Square at 333 O'Farrell St.
Staying at the 25th floor.
And, my Mauzie girl who was super smart, sat in her sports bag with zipper over her back. I held it with my Burberry trenchcoat concealing her - she never said a word!
It was just for a brief moment a bit tense, when the bell boy tried to relieve me from my bag... he was tugging it but I firmly said; no Sir, I can handle that myself!
Mauzie had a pep talk in the room where I told her that we have now neighbors above, below and on both sides - don't 'speak'.
No wonder Mauzie's Daddy was then Champion in The Netherlands!
We woke up in the morning to the Carillon playing 'Dancing Mathilde'... oh the atmosphere of Union Square! 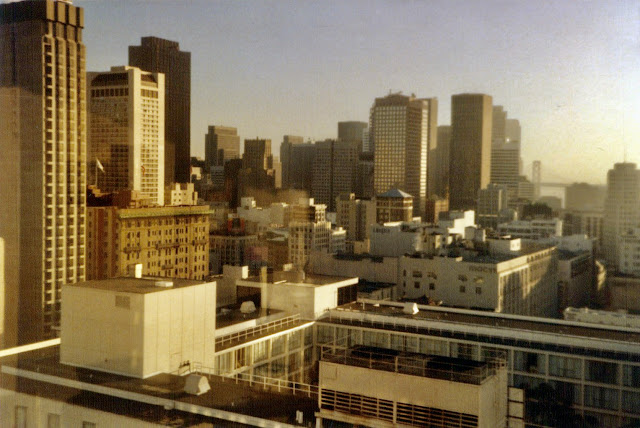 The view from our 25th floor was absolutely stunning!
It was a pricy hotel for both of us at the time, $ 123.00 per night as Pieter was not yet on the payroll, due to both of us waiting for the green card...
To the right you can see San Francisco - Oakland Bay Bridge 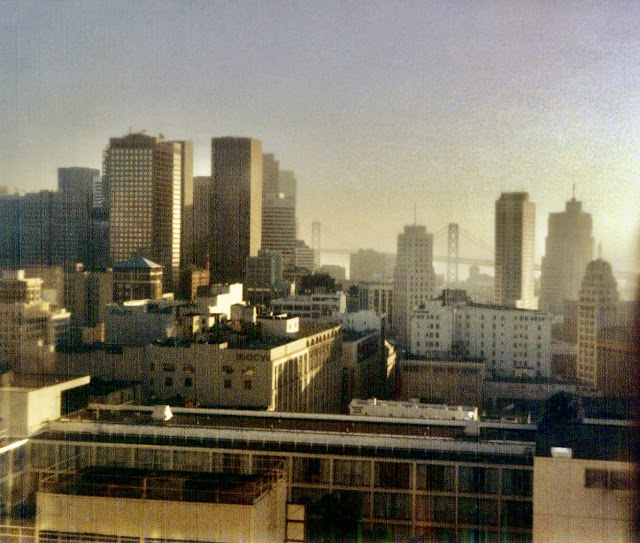 Here an even better view of San Francisco - Oakland Bay Bridge
Macy was right in front as of course were all major stores around Union Square!
We did waste so much of our precious time that Friday at a travel service for changing our flight back to Atlanta, into a flight to Philadelphia as Pieter was requested by the CEO of Campbell Soup, to give a presentation... 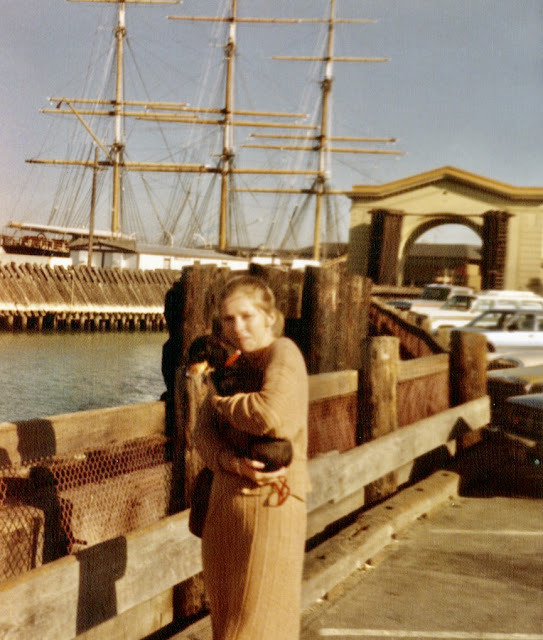 But we managed to go by taxi to the Fishermans wharf and view an old submarine and a sail ship.
That is me standing in front of said sail ship, with my Mauzie girl.
Top photo also got taken at the Fistherman's wharf. 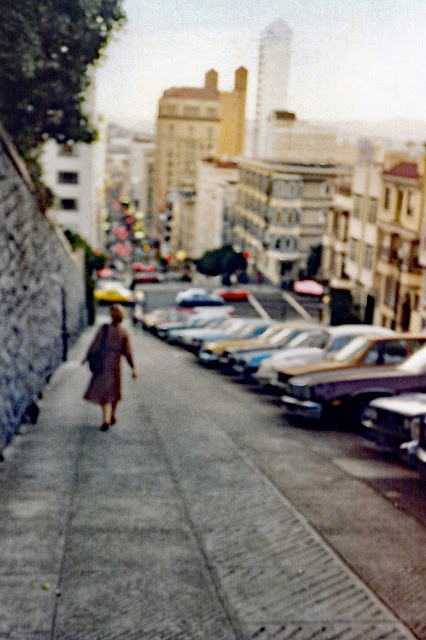 We did walk back to the hotel and it was rather steep. 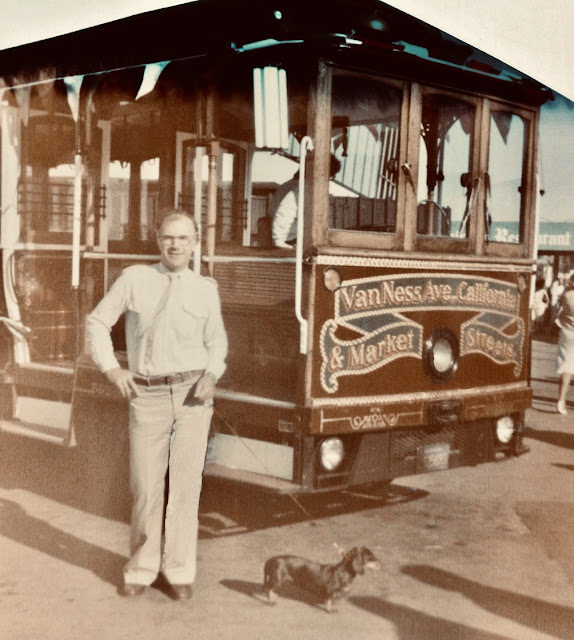 Cable cars were OUT - due to repair!
Not today... but Mauzie got carried for some segments. 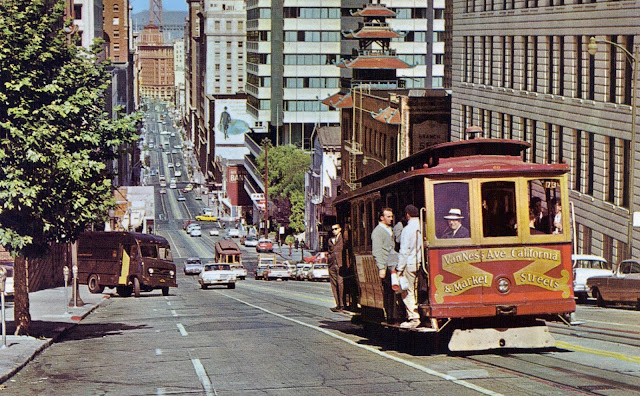 This is from a postcard... We had to do this on foot; both ways. 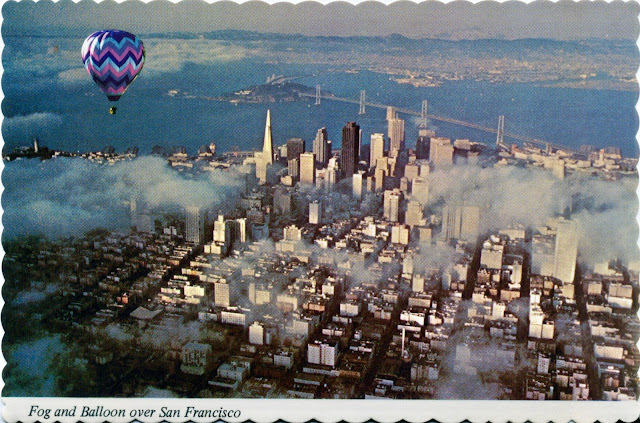 Yes, San Francisco fog is famous and it can be rather chilly there in the evenings!
On Saturday, October 22, we had to stay in our room merely because Pieter was writing his presentation for the CEO but we managed to walk in 45 minutes to the Fisherman's wharf again and made a 2 hour trip by boat; via the Bay Bridge to Alcatraz Island. 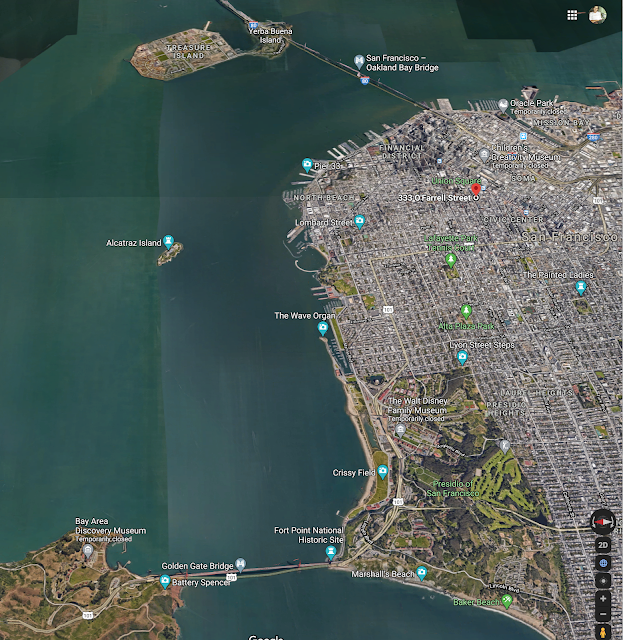 Google.com/maps
Red dot is where Hilton Hilton San Francisco Union Square is. To the left you can see Alcatraz Island.
We walked back to our hotel, via China Town, the oldest in North America and largest Chinese enclave outside of Asia.
No photos from that trip... later I would take my Dad by boat to Alcatraz Island and got some photos.
Will show that in a future post... 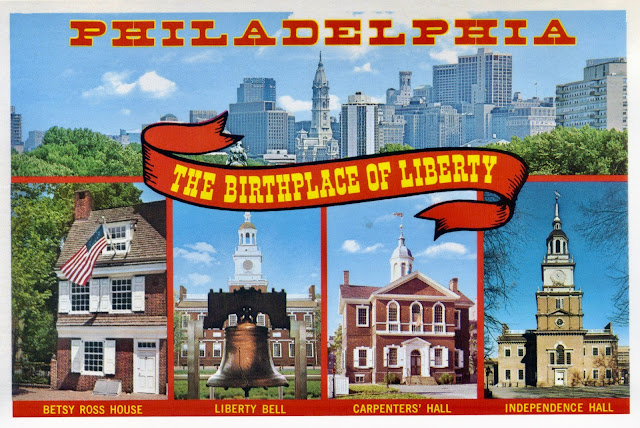 On Monday, October 23, we all flew in seven hours from San Francisco via St. Louis, Missouri to Philadelphia and with a taxi went to the Hyatt hotel in Cherry Hills, New Jersey.
On Tuesday morning Pieter got picked up by a colleague and had his meeting and presentation with the CEO at the Campbell Soup Headquarters, 1 Campbell Place in Camden, New Jersey.
I read while the men met and by 16:00 we went by taxi to the airport for take off to Atlanta and home by 23:00

Yes, our Mauzie girl has been to several States and Countries!


Related link:
My First Trip to California, Santa Cruz | Previous post by me
Posted by Mariette VandenMunckhof-Vedder at 8:00 PM