My South Africa Publication Around Husband Pieter's Lectures at Congress

Yes, at that time in the mid 80s, I was writing features for our local newspaper The Courier Herald for their Thursday's Tempo. So here is my story about our trip to South Africa where husband Pieter did a series of lectures for the South African Mushroom Growers Association.
Our very 1st trip to South Africa! 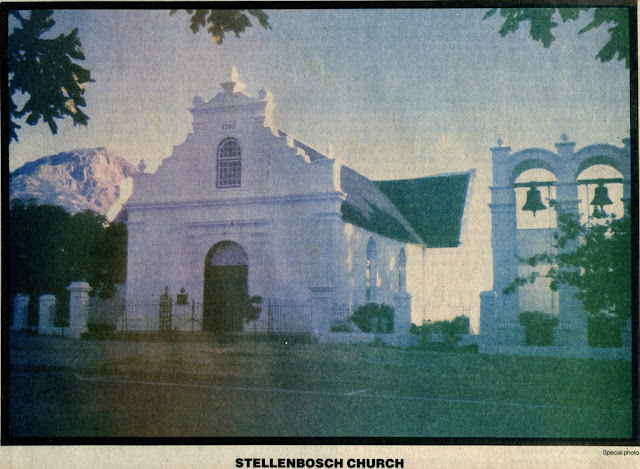 Rhenish Mission Church in Stellenbosch, South Africa
The above is the copied color photo that was in the news paper.
The Pdf at that format was only possible in black and white.
Later I will show the REAL photo, in better quality...
International influence is evident in South Africa's beauty just click for seeing the article in Pdf format, which gives you the option to enlarge it for easy reading. 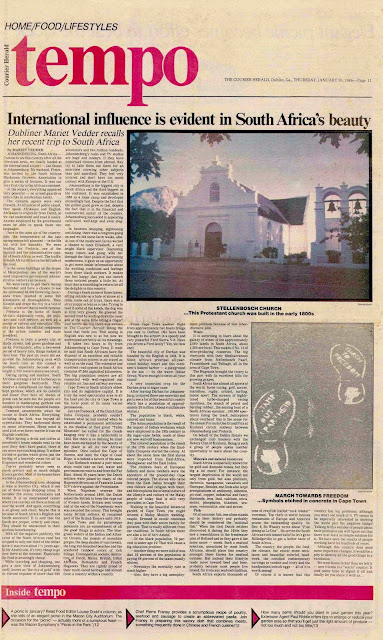 This was published on January 30, 1986...
Believe it or not, only this year I finally managed to scan some of the slides and we actually never had the TIME for sitting down and RELIVE this fabulous trip.
Always on the move, in the air or doing big projects in the home and garden.
For good reason I want to dedicate my time for completing this South Africa series, so my dear husband Pieter can enjoy reading and viewing them!

Those that can read in English, can do so via the above link to Pdf.
For all other languages I have typed again the full text so it can be translated by the tool at the top of my blog.
More photos to come in future posts!

Thank you for your visit!