Today is World Polio Day ←(click it) and that is special for sharing with you. If you click on World Polio Day you will go to the link from 'End Polio Now' by Rotary International, as they intend to eradicate it from the earth!
In our lives, there are three persons we've worked with that had Polio.
Our boss in Italy had Polio as a young boy, but he grew out of it and managed a normal life. In Mernda, Victoria in Australia at one of the Campbell Soup mushroom plants, I worked with Tony, the harvest manager, in June of 1988 and he walked still on crutches, however FAST! It amazed me how driven this young man was and he had a great work ethic, despite him having had polio and never completely getting out of it. I certainly did admire his dedication.
Let me now introduce you to John H.G. Soe from Jakarta, with his incredible Polio related story... 'Nobody's child, everybody's man' as published in the The Jakarta Post ←(click it). Complete text will also follow below, so other countries can use the translate tool, to be found above at this blog. You can select from the drop-down window your language choice. 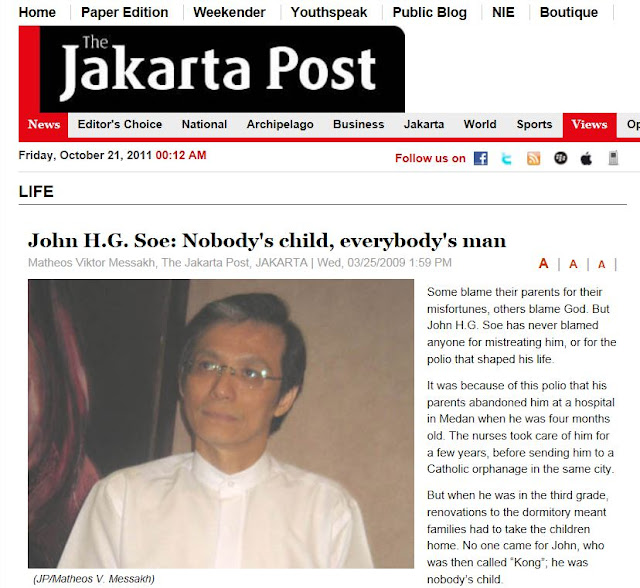 We got to know John H.G. Soe on August 08, 2008 via Plaxo, when we found his profile and he was also a member of the Jakarta Sentral Rotary Club. So he reacted with his first message which started our special friendship.

This energetic Rotarian has moved mountains on behalf of the poorest of the poor, the victims of Leprosy. Will tell more about that later... He also did design, FREE of charge the new Rotary International District 3400-Dormitory and a Health Center  for the TSUNAMI victims in Aceh, Indonesia.
~~~0~~~

﻿My Birthday Wish is in honor of my beloved father, Ted de Ponti, who exposed me to Rotary Clubs


The Son from the Orphanage

It was in 1973, a bachelor Singapore businessman, Ted de Ponti said to a Dutch nun, a friend from his hometown in The Netherlands that he wanted to adopt a son. He asked her to look for a suitable child – one who needed help, but who had “potential”. “One who has gray matter, so that he can study.” Ted said: “I want him to be someone".

The Dutch nun told him about a deserving case. A fourteen-year-old boy who was crippled by polio; hardly able to walk, his legs distorted and bent like a bow by the disease. Yet he was sweet-natured and courageous, and did well in school, struggling in his childish way to overcome his handicap.

It was Sunday – June 1973. The boy had been waiting since early morning. The nuns he lived with, had told him that a kind “uncle” would be coming to meet him, to adopt him. He put on his best clothes – the worn garments which were donated to the nuns, but clean and carefully mended. He dragged himself to the parlour where visitors were received. He waited, full of childish hope and faith.

The convent was the only home he could remember. He had been brought there as an infant, struck by a crippling disease, polio, at a tender age of 9 months. And over to superstitions on the part of his parents, he was abandoned and taken care of by a Roman Catholic Orphanage in Medan. He grew up in the Convent, listening to the silence and the prayers, and the sound of the bells.

He had never been cuddled or carried on someone’s lap. He had never known his parents, but only the gentle kindness of the nuns. He was starving for the warmth of family love.

A local surgeon examined his legs. Then told him that an operation could be done, to straighten his leg so that he would be able to walk.

One day the boy boarded a plane to fly to the big city of Singapore, for the operation.

At first he was frightened and lonely in the ward at the Mount Alvernia Hospital. He felt reassured when he saw the nuns there, just like the nuns who had brought him up. He had four operations on his legs for the durations of a 9 months stay at the hospital.

The hospital and the eminent surgeon, DR.V K Pillay, who did the operations, impressed by Ted’s generosity, and never charged for the services rendered to the Indonesian boy.

With love & care… and a feeling that from that day on, he would be loved and cared for by someone to whom he was very special.

”Ted gave me confidence and love. He changed everything in my life".

The shy, sheltered child from the Convent had become a confident young man.


~~~0~~~
Below follows the complete text from the Jakarta Post:
﻿Some blame their parents for their misfortunes, others blame God. But John H.G. Soe has never blamed anyone for mistreating him, or for the polio that shaped his life.


It was because of this polio that his parents abandoned him at a hospital in Medan when he was four months old. The nurses took care of him for a few years, before sending him to a Catholic orphanage in the same city.

But when he was in the third grade, renovations to the dormitory meant families had to take the children home. No one came for John, who was then called “Kong”; he was nobody’s child.

“Not only that day, but every school holiday, other children were picked up by their family, but nobody ever asked me even to go outside the orphanage’s dormitory…”, John told The Jakarta Post.

A nun found his parents, but his mother rejected him, but the nuns couldn’t take him back because of the renovations.

“I was crying because I felt more comfortable with the nuns. I had no feelings whatsoever for my parents.”

He spent “a very bitter week” with his family. They kept him in the small backyard and he was not allowed to play with his sisters and brothers. He slept on the floor where the others had beds, and was fed differently.

“I was given rice and a bit of vegetables while my brothers and sisters got chicken or duck,” John recalled. He also remembers an occasion when he was dragged to the back of the house when a guest asked who he was.

After 10 days, his brother took him back to the orphanage. The nuns, shocked at his condition, never sent him back to his parents again.

In 1973, Dutch-Italian businessman Ted de Ponti, a Singapore-based Rotarian and former Red Cross volunteer, visiting one of the nuns at the orphanage, said he wanted to adopt an orphan who was “really abandoned but academically bright”.

The obvious choice was the boy who was crippled by polio, a boy who had never had anyone visit him, but was so clever he could repair his friend’s broken radio. “I remember it was Sunday June 13th. The nuns said ‘an uncle’ would come and meet me to adopt me.”

John put on his best clothes and dragged himself to the parlor to wait. “I felt so happy when he hugged me. He took me to the shop to buy me my first new clothes ever and a Timex watch, and held a dinner at a restaurant where he introduced me as his son to his friends.”

De Ponti covered all the boy’s expenses and visited him regularly, before arranging for John to be taken to Singapore for surgery.

When the nuns got papers from John’s parents for the passport, he finally learned his birthday — June 17, 1959 — the names of his parents and his eight siblings, and his own birth name: Soe Hian Ghe.

In December 1973, De Ponti brought the boy to Singapore. The Rotary Club had decided to pay for the operations and Rotarians in Zevennar, the Netherlands, sponsored the trip.

He underwent four operations; after eight months in the hospital, his right leg, which was bent like a bow, began to improve. His ankles started to function, and now he can even drive a car.

After the first operation, The Strait Times ran a story about him, including a picture of him munching chocolates. The chocolate company, pleased with the free advertising, sent him dozens of boxes of chocolates, which he sent to his friends in the orphanage in Medan.

Everything was done at no cost — even Singapore Airlines provided a return trip for free. The money Rotary had committed for his operations now went to his education.

A month after the final operation, John returned to school in Medan. As he was 14 years old and had a disability, only a girl’s school would accept him. “Only two of us were boys, we both had polio.”

He later studied architecture in Singapore and interior design in London. He planned to return to Singapore but because of the 1985 economic crisis, his foster father advised him to go to Jakarta instead.

The first thing he did was to look up his family, who had moved to the Indonesian capital. His mother was still cold to him. “I told them that I only wanted to make a family bond and had no intention of making them feel bad.”

A year later, his family asked for forgiveness. John felt the request was unnecessary. “The past is the past, let’s look to the future,” he said.

John soon began his career in an architecture firm, and within five years had set up his own architecture and interior design company, which he still runs.

He married in 1988 and has two children. Ted de Ponti died in 1990, two month after John’s first child was born.

“I still remember he was very happy when my son was born. My son was like a first grandson to him,” John said. “Ted gave me confidence and love. He changed everything in my life.”

Because of the help Rotary gave him, John wanted to become a Rotarian, a dream realized when a client recommended him for membership in 2003.

Since he was indicted in 2004, he has held several important positions, including club secretary and club president; he is now the assistant governor for the Jakarta region.

He was been active in Rotary’s fight against polio, especially during the joint Rotary–Health Ministry campaign for the national immunization program in 2005 and 2006.

Looking back, John has no regrets or bitterness.

“I always think there is always someone who is experiencing something worse than me,” he said. “Everything is a blessing in disguise. I wouldn’t be what I am today if my parents did not leave me at that hospital.”

Related link:
{ Like Princess Diana, I also Tried to Tackle the Leprosy Stigma} | John H. G. Soe mentioned as our liason in the Leprosy Project

Related clickable links:
{Like Princess Diana, I also Tried to Tackle the Leprosy Stigma} | Mentioning John H.G. Soe in his help for obtaining Rotary International Grant to help Leprosy victims
{October 24, 2012 is World Polio Day} | post by me
Polio survivors share a wealth of insight | interesting insights from the above mentioned friend...

Posted by Mariette VandenMunckhof-Vedder at 11:04 PM