Early in bed by 2:00 and rising again at 7:30 for the 2nd day of the Congress on November 21, 1985.
We had breakfast and Pieter opened the day by being the first one to lecture and as usual, showing his slides.
For lunch we drove to the Tongaat Mushroom Farm in Bryanston, where they used wooden trays as tables and we were seated on straw bales.
It is here, where I got bitten by a stray puppy, a Rhodesian ridge back.
It gobbled up some of the meat of my kebob and when I gave it also bread, it bit in my finger!
'Biting the hand that's feeding you', as mentioned in my Newspaper Publication (link below this post). 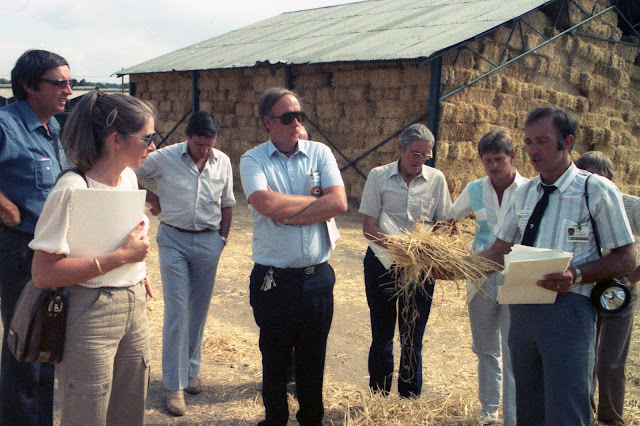 Always interesting to be really in the field, a practical class room so to speak! 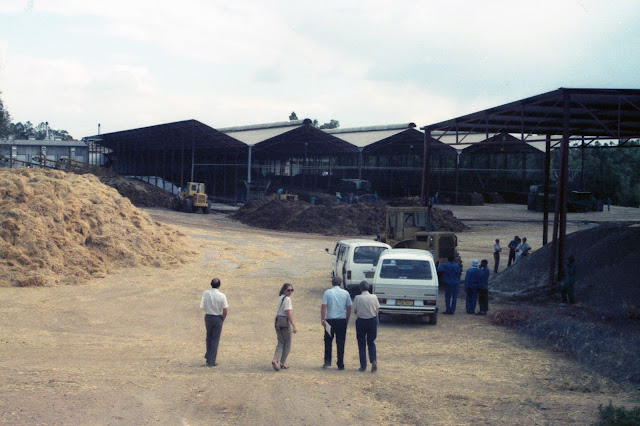 Husband Pieter sure did climb up somewhere high enough for making this photo!
He was always such an avid photographer! 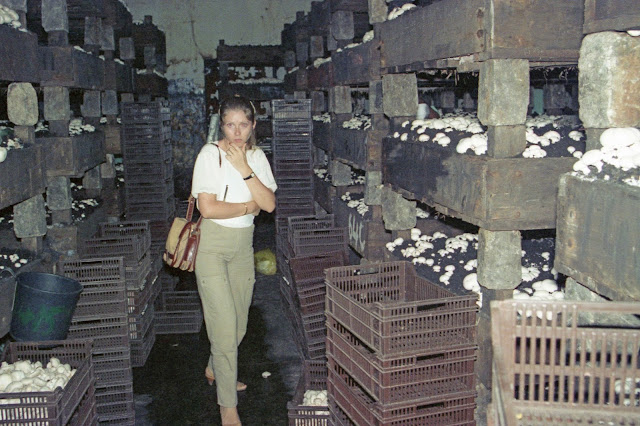 Me, pondering in this Mushroom growing room at the time of harvest... 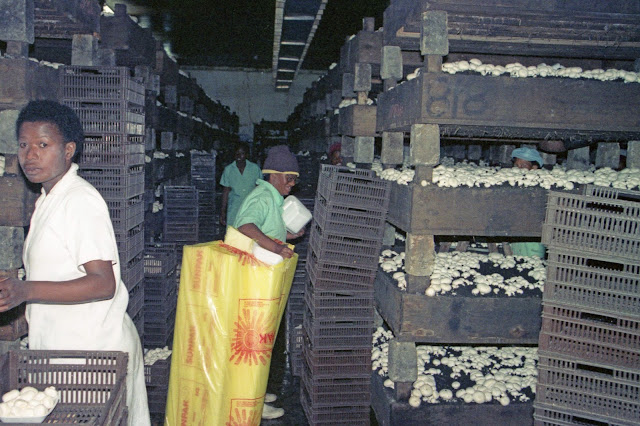 Having a peek inside the Tongaat Mushroom farm where the harvesters were picking away. 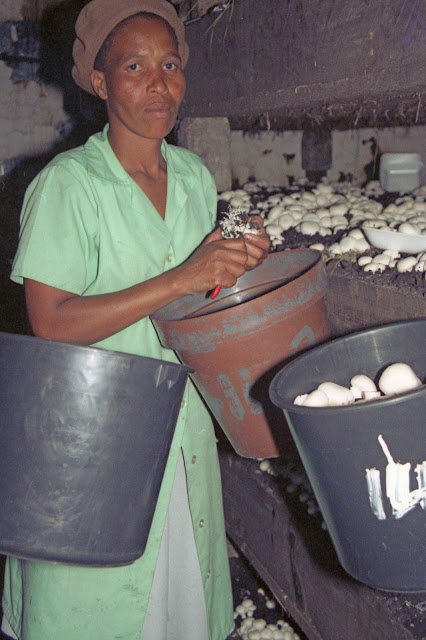 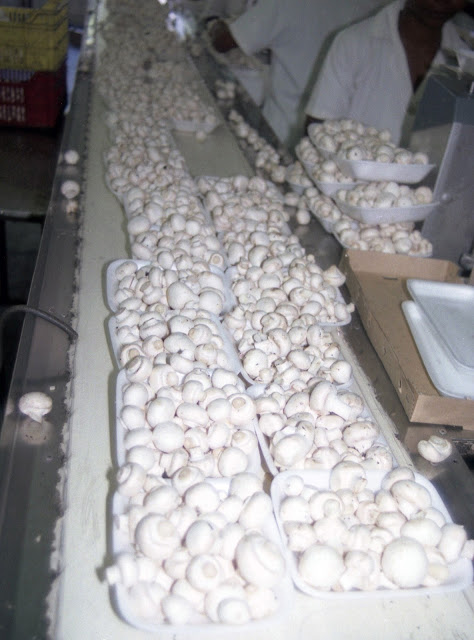 This is the end result in the packaging area where they will be wrapped and labeled. 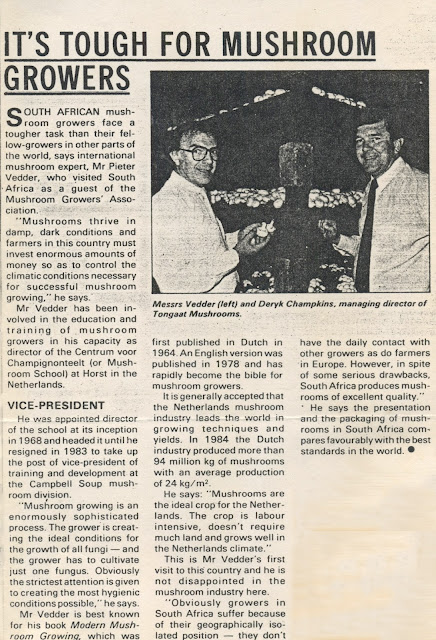 That very afternoon, Pieter also did an interview for their Farmer's Weekly and it got published on January 10, 1986.
IT'S TOUGH FOR MUSHROOM GROWERS
SOUTH AFRICAN mushroom growers face a tougher task than their fellow-growers in other parts of the world, says international mushroom expert, Mr. Pieter Vedder, who visited South Africa as a guest of the Mushroom Growers' Association.
"Mushrooms thrive in damp, dark conditions and farmers in this country must invest enormous amounts of money so as to control the climatic conditions necessary for successful mushroom growing," he says.
Mr. Vedder has been involved in the education and training of mushroom growers in his capacity as director (principal) of the Centrum voor Champignonteelt (or Mushroom School) at Horst in the Netherlands.
VICE PRESIDENT
He was appointed director (principal) of the school at its inception in 1968 and headed it until he resigned in 1983 to take up the post of vice-president of training and development at the Campbell Soup mushroom division.
"Mushroom growing is an enormously sophisticated process. The grower is creating the ideal conditions for the growth of all fungi ― and the grower has to cultivate just one fungus. Obviously the strictest attention is given to creating the most hygienic conditions possible," he says.
Mr. Vedder is best known for his book Modern Mushroom Growing, which was first published in Dutch in 1964. An English version was published in 1978 and has rapidly become the bible for mushroom growers.
It is generally accepted that the Netherlands mushroom industry leads the world in growing techniques and yields. In 1984 the Dutch industry produced more than 94 million kg of mushrooms with an average production of 24 kg/m2.
He says: "Mushrooms are the ideal crop for the Netherlands. The crop is labour intensive, doesn't require much land and grows well in the Netherlands climate."
This is Mr. Vedder's first visit to this country and he is not disappointed in the mushroom industry here.
"Obviously growers in South Africa suffer because of their geographically isolated position ― they don't have the daily contact with other growers as do farmers in Europe. However, in spite of some serious drawbacks, South Africa produces mushrooms of excellent quality."
He says the presentation and the packaging of mushrooms in South Africa compares favorably with the best standards in the world. 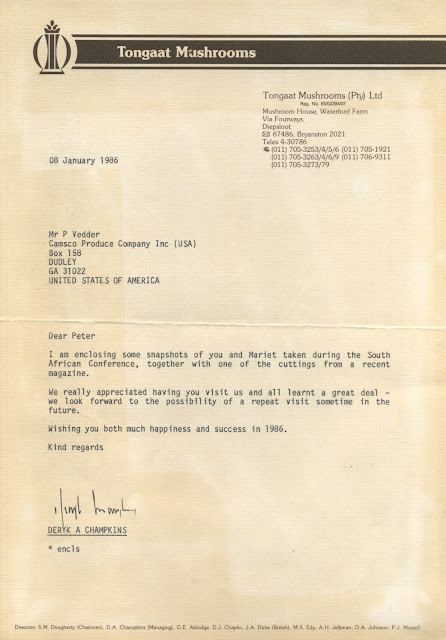 The above article got sent to us on January 8, 1986 together with the black and white photos that I showed you in my previous Part IV. 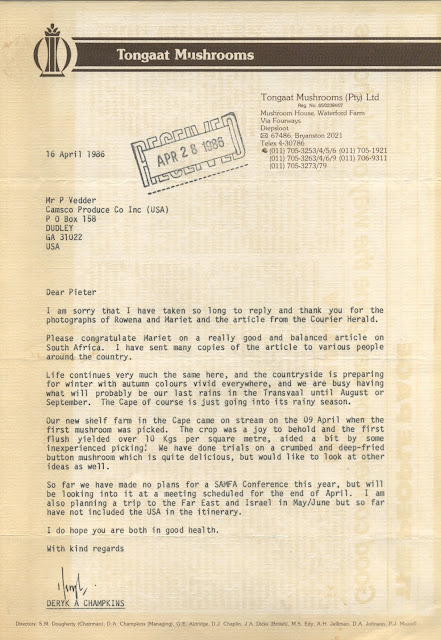 On April 16 we got this reaction to the article that I wrote for the Courier Herald (see link below, My South Africa Publication...).

Fond memories of that special day!
We did also attend a Rotary Club dinner-meeting with the club of Kyalami South.
Pieter exchanged the Rotary Club's flag from Dublin, Georgia, USA for theirs to bring back with us.

Quite an experience for one single day...

Thanks for visiting and stay tuned for Part VI