It was only within two years since that very 1st trip to Australia, for lecturing, that husband Pieter's Dutch book on Mushroom Growing got now published in English as well.
See below post for info about new published English book!
Following the nature of comments I received on my previous post, I'd like to give some more information about my retired husband Pieter... 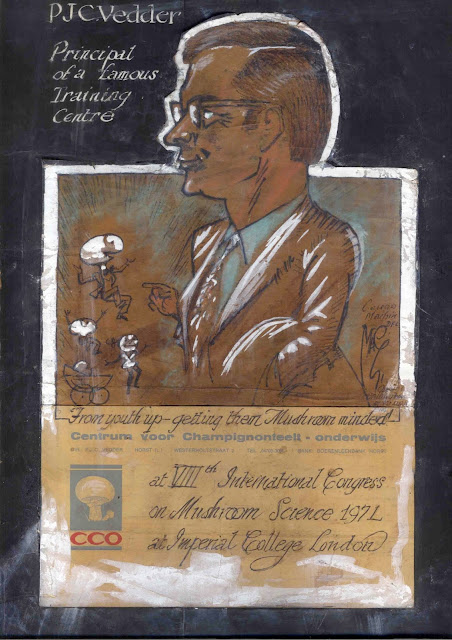 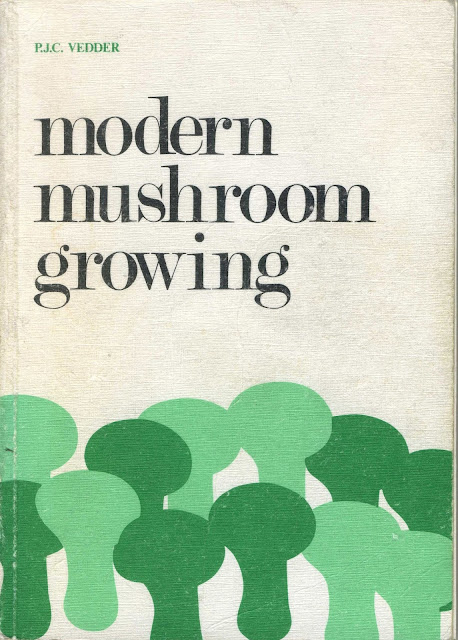 So there it was; 1978 the first English publication of his book! 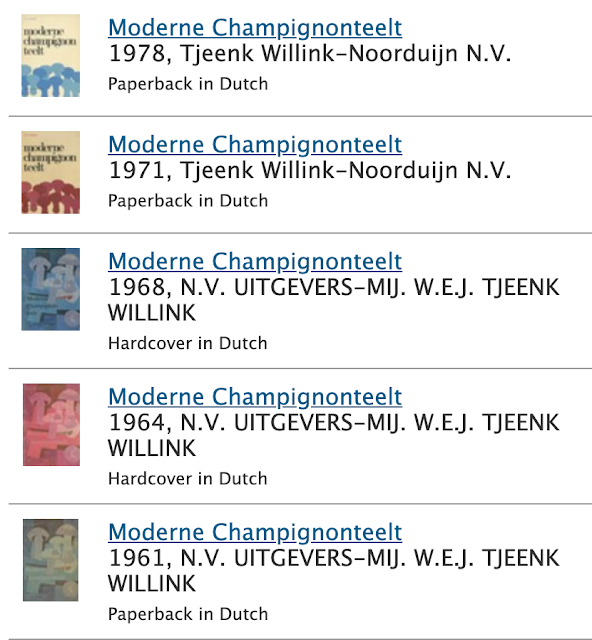 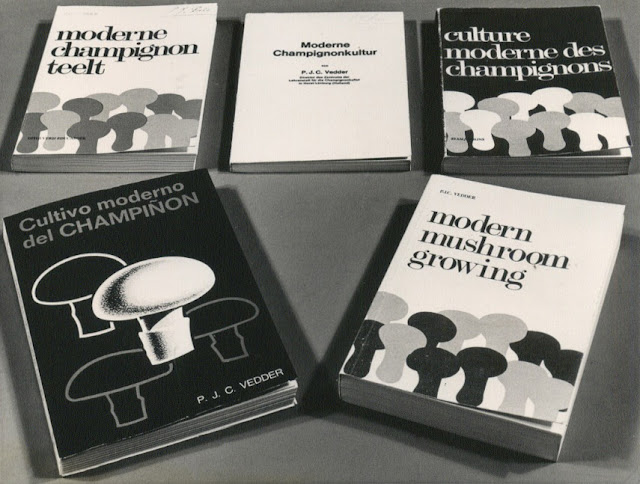 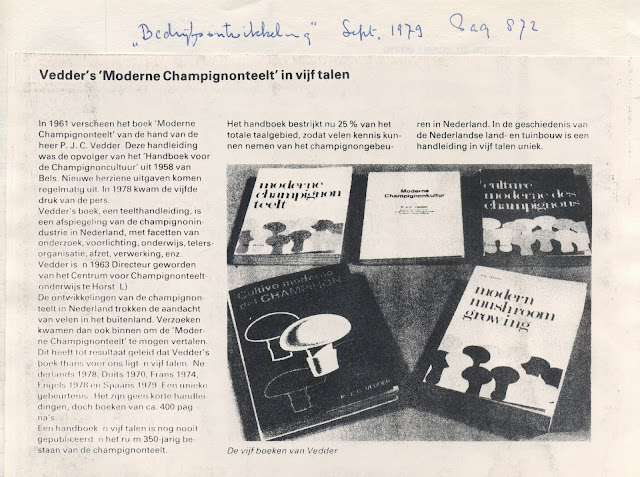 The above article (Dutch) got published in "Bedrijfsontwikkeling" September, 1979, page 872
Vedder's Modern Mushroom Growing in five languages.
In 1961 the book 'Moderne Champignonteelt' appeared by Mr. P.J.C. Vedder. This manual was the successor of the 'Manual for Mushroom Culture' from 1958 by Bels. New revised editions are being published regularly. In 1978 the fifth edition came off the press.
Vedder's book, a cultivation manual, is a reflection of the mushroom industry in The Netherlands, with aspects of research, information, education, growers organization, marketing, processing, etc.
Vedder in 1963 became Director (Principal) of the Center for Mushroom Cultivation Education in Horst, Province of Limburg.
The developments of the mushroom industry in The Netherlands, drew the attention of many from abroad. Requests therefore came for allowing to have 'Moderne Champignon Teelt' translated. This yielded the result that Vedder's book now lies before us in five languages. Dutch (5th edition) 1978, German 1966, French 1974, English 1978 and Spanish 1978 (several editions). A unique event. They are not short tutorials, but books of about 400 pages.
A manual in five languages has never been published in the more than 350-year anniversary of mushroom cultivation.
The manual now covers 25% of the total language area, so that many can draw knowledge from the mushroom events in The Netherlands. In the Dutch history of agriculture and horticulture a manual in five languages is unique.

The five books by Vedder (under photo).
~
Needless to say that I feel very proud of my Pieter!
His book has been called: 'The Mushroom Bible' and it has helped so many. 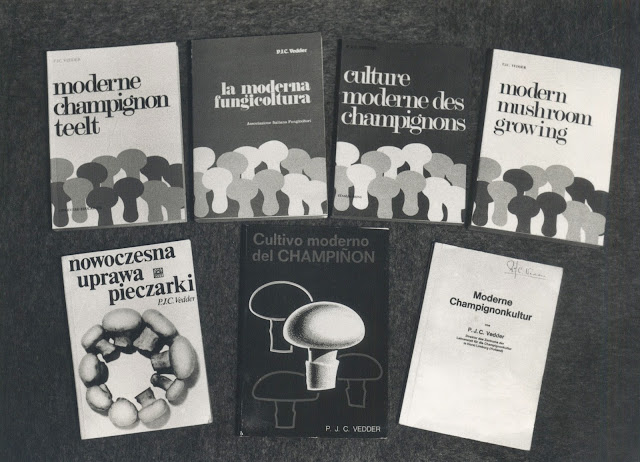 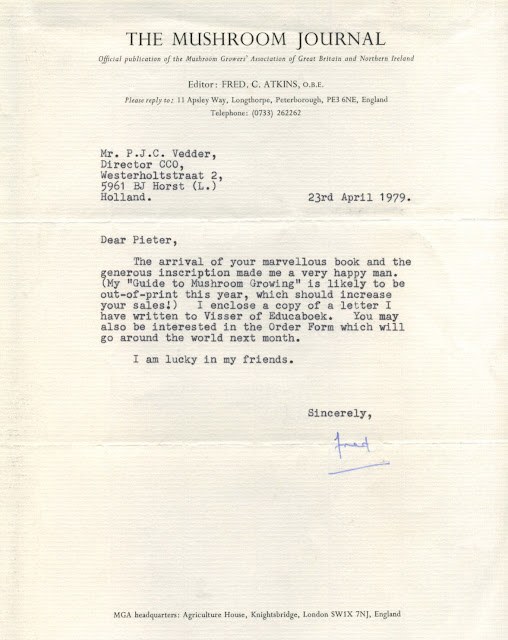 His colleagues world wide responded with kind letters.
Like here by The Mushroom Growers' Association of Great Britain and Northern Ireland, Mr. Fred C. Atkins who writes about the arrival of your marvelous book and the generous inscription made me a very happy man. 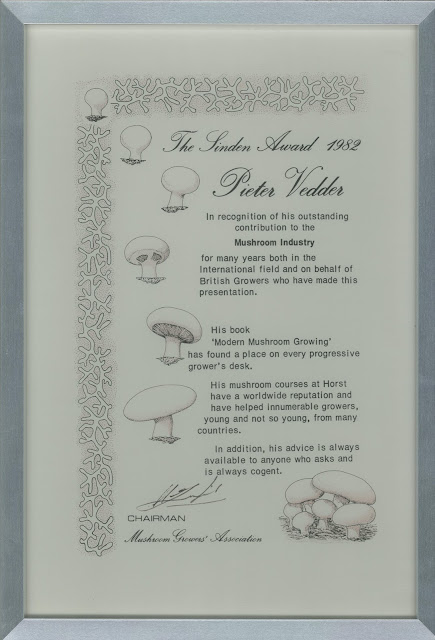 The British have had a very close and long standing relationship with Pieter.
This yielded him The Sinden Award 1982
Pieter Vedder
In recognition of his outstanding
contributions to the
Mushroom Industry
for many years both in the
International field and on behalf of
British Growers who have made this
presentation.
His book
'Modern Mushroom Growing'
has found a place on every progressive
grower's desk.
His mushroom courses at Horst
have a worldwide reputation and
have helped innumerable growers,
young and not so young, from many countries.
In addition, his advice is always
available to anyone who asks and
is always cogent.
Chairman
Mushroom Growers' Association 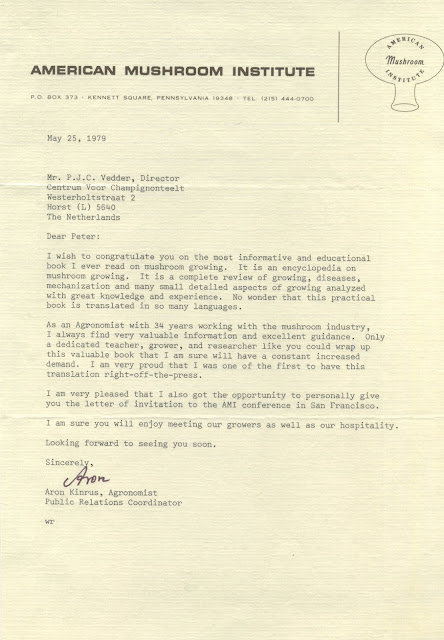 Another very kind letter from the USA from the American Mushroom Institute
Dear Pieter:
I wish to congratulate you on the most informative and educational
book I ever read on mushroom growing. It is an encyclopedia on
mushroom growing. It is a complete review of growing, diseases,
mechanization and many small detailed aspects of growing analyzed
with great knowledge and experience. No wonder that this practical
book is translated in so many languages.
As an Agronomist with 34 years working with the mushroom industry,
I always find very valuable information and excellent guidance. Only
a dedicated teacher, grower, and researcher like you could wrap up
this valuable book that I am sure will have a constant increased
demand. I am very proud that I was one of the first to have this
translation right-off-the-press.
I am very pleased that I also got the opportunity to personally give
you the letter of invitation to the AMI conference in San Francisco.
I am sure you will enjoy meeting our growers as well as our hospitality.
Looking forward to seeing you soon,
Sincerely,
Aron Kinrus, Agronomist
Public Relations Coordinator 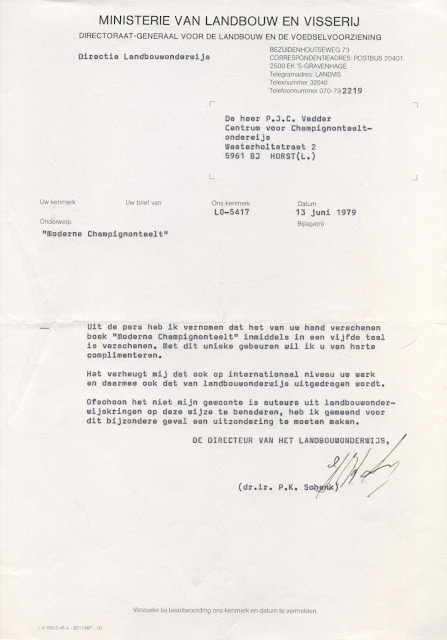 Lastly, but in fact THE most important one came on June 13, 1979 from Pieter's Boss:


MINISTRY OF AGRICULTURE AND FISHERIES


I have heard from the press about your book "Moderne Champignonteelt" now having been published in a fifth language. With this unique happening I would like to warmly compliment you.
I am pleased that at an international level your work and with that also agricultural education is being propagated.
Although it is not my habit to approach in this way authors from agricultural education circles, I have felt to make an exception for this particular case.
THE DIRECTOR OF THE AGRICULTURAL EDUCATION
(Dr. Ir. P.K. Schenk) 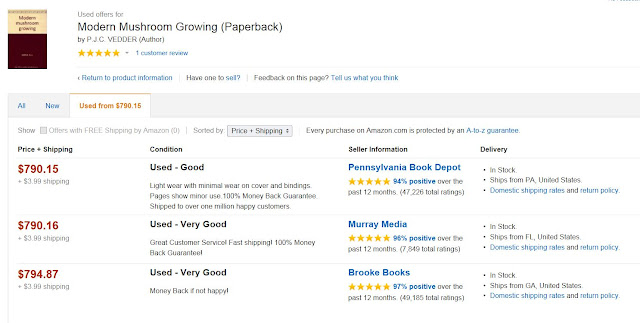 No wonder that copies of his book still are being offered at a better price than they ever sold for right off the press! 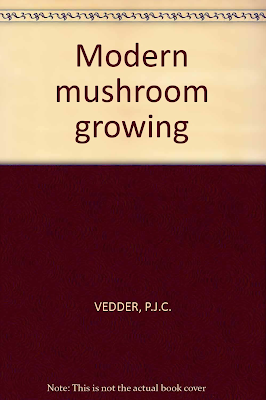 This is not the actual cover...
Wonder why they put this on?!

Thanks for your visits and comments - greatly appreciated, also by Pieter!