My 5th Consulting Trip to India & Visit of Taj Mahal

On Wednesday, July 27, of 1994 we both flew again to India for consulting service together. This was Pieter's 8th trip to India meanwhile.
On KLM Royal Dutch Airlines we sat in preferred seating, the old business class.
We landed in Amsterdam on Thursday, July 28, at 8:00 and went to hotel Ibis.
On Friday, July 29, we did rise early at 5:30 and rode the Ibis bus to the airport.
Our Royal Wing card did yield us again a business seat on our way to Bombay (Mumbai). 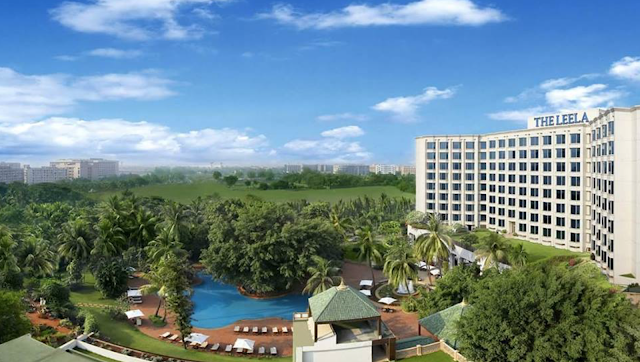 On Saturday night, July 30, we were at our The Leela Hotel, Mumbai by 1:00 and went to bed.
By 11:00 we went back to the airport for our flight to Coimbatore. From there the usual climb up into the mountains, by car and it was beautiful and green.
We reached our guest house in Ooty by 17:30, it was rainy and windy!
This time we came prepared with a piece of thick plastic in our suitcase to cover those metal slats to keep the cold wind out.
It sure made it a lot more pleasant!
On Sunday, July 31, we went to the mushroom farm by 8:00 and were back home by 19:00.
It was such inclement weather and here we were with compost hands, eating our sandwich near the electric heater!
On Monday, August 1, we again went together to the farm. This time I asked a favor for stitching my black leather jacket that had come loose when carrying the heavy square box with glass and sculpture gift from Pond's, inside my Samsonite bag. It would be sent to Madras (Chennai) to the leather garment factory where Pieter had purchased a lambs leather jacket for him and for my brother Martin plus a suede leather for me.
We had dinner at the home of one of the staff members.
We continued working every day and on Thursday, August 4, a special courier from Madras did bring back my meticulously stitched leather jacket! What a joy.
Friday, August 5, was our final day at work and we got again honored with a farewell ceremony in which we, as usual received each a gift. A twin gift since we both worked for them. This time it were solid silver Diyas in which the Hindus pour fragrant oil and use 5 cotton wicks to light it.
On Saturday, August 6, we did drive by car early morning with a staff member to Mysore and visited the Palace, where we have been before. Then we traveled to Bangalore and stayed at the Sheraton hotel in Bangalore.
On Sunday, August 7, we flew to Delhi, and stayed at hotel Kanishka (Ashok), sounds almost Russian...
Strange enough, there were lots of Russians staying!
We had a relaxing day.
Monday, August 8, at 4:15 I shampooed my hair, nearly cold water... By 5:30 we left with 2 beautiful sisters as our guides. They were the daughters of some of Pond's employees and we were going to Agra, some 225 km south of Delhi.

There still was no 6-lane Yamuna Expressway at the time and on the road we saw elephants with  HUGE balloons of fabric, that got filled with fresh harvested cotton. Large black camels pulling a cart and with the shaves pointed up.
Black camels are larger than the Arab camels and in the dessert state of Rajasthan, there are a lot of them. 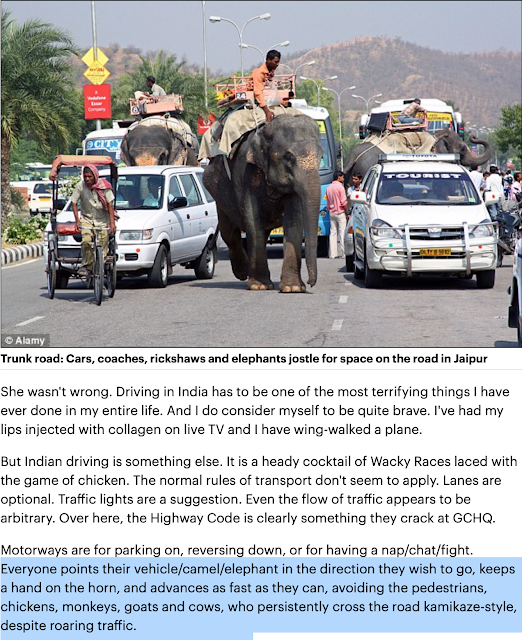 In an article of the Daily Mail: From Delhi to Jaipur and back in a VW Polo? You'll need a blindfold for that! I did find some similar chaos to show you how that looked like.
The writer also mentions: Everyone points their vehicle/camel/elephant in the direction they wish to go, keeps a hand on the horn, and advances as fast as they can, avoiding the pedestrians, chickens, monkeys, goats and cows, who persistently cross the road kamikaze-style, despite the roaring traffic.
~
Yes, we saw goats, stray dogs that were either pregnant or nursing pups. The ever present holy cows and buffalos, adding horses and donkeys used by people as load animal.
You just did weave with your car all the way through. Those cows know that wonderfully well, they usually dream or lie in the median, a raised area between the lanes. The average speed was not high with all the roaming cattle! Occasionally on an open stretch you reached one hundred km/hr. It was pleasant to keep the windows closed and the air conditioning on in the car, thus keeping the odor of manure from all those beasts at bay. Oh yes, there were also roaming pigs, kind of wild boars, at least they looked a lot like that. Plenty of manure and to top it off,  the necessary mud from the wet monsoon! Unseen, you can not imagine what a mess and chaos there was!!! 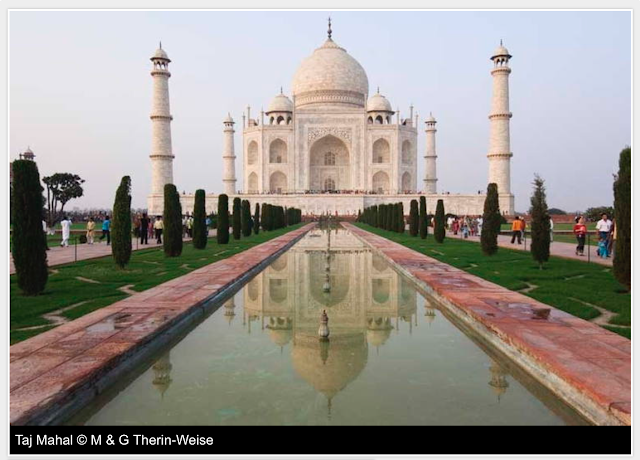 Taj Mahal a UNESCO World Heritage site click on pink hyperlink to read more.
BUT we made it to Agra and we enjoyed the marvel of the Taj Mahal.
It is entirely built in white Indian marble, which is a lot harder than the Italian marble.
As a matter of fact it is the mausoleum of the Mughal emperor Shah Jahan who had it built for his beloved wife Mumtaz Mahal.
She was a Persian Princess who died when giving birth to their 14th child. 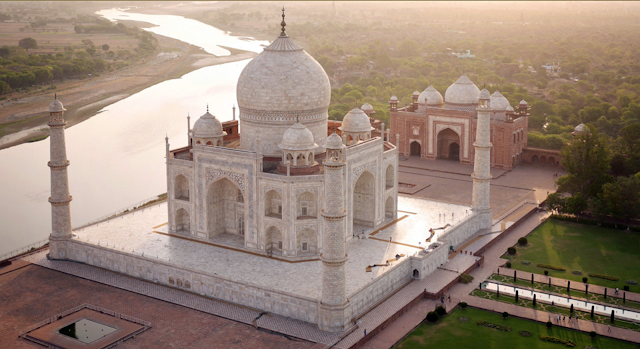 It is indeed one of World's Wonders!
Beautifully situated on the banks of the Yamuna River lies the Taj Mahal.
Taj Mahal (UNESCO/NHK) video with lots of info. At the time we were there, it was prohibited to make any photos! You even had to pay for having your camera placed inside a locker... 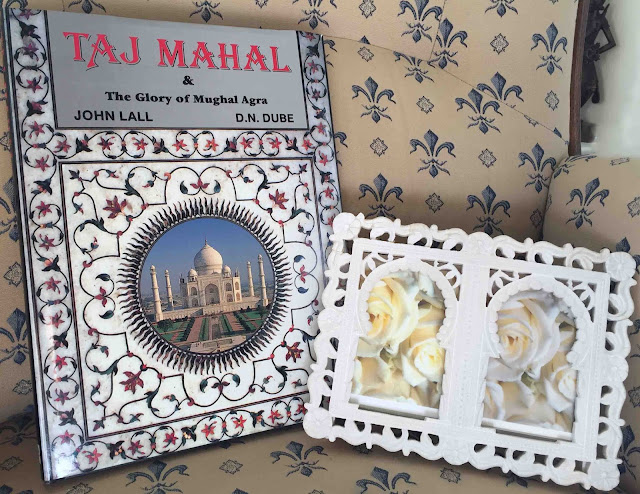 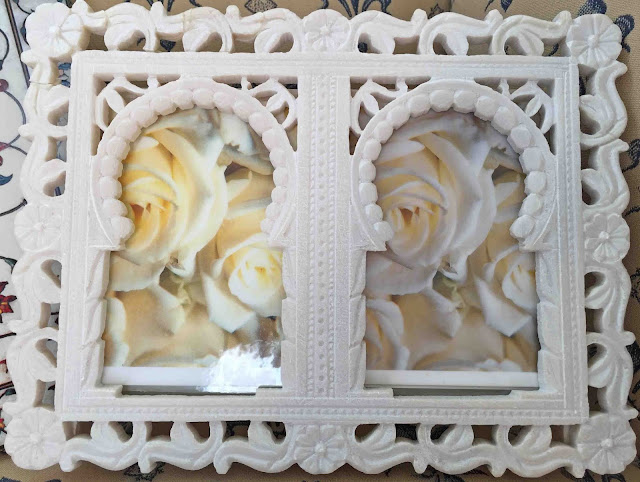 From the White Indian marble we purchased the above picture frame at the Taj Mahal. 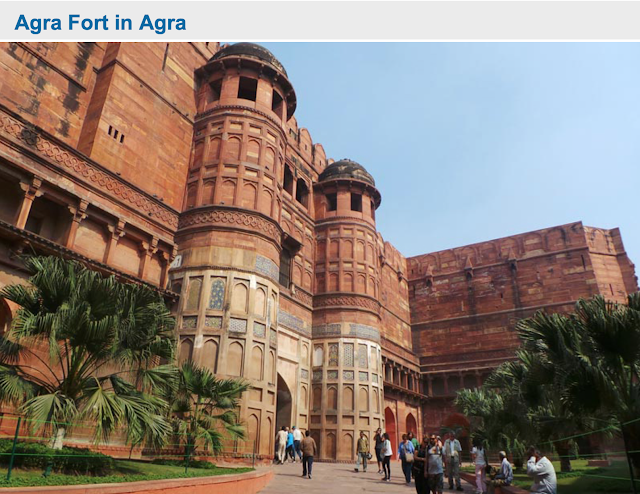 Agra Red Fort see more photos via link.
This is an enormous complex of palaces.
We enjoyed our private English guide and learned a lot! Great architecture from the early 17th Century.
The road back in our Ambassador car was again an adventure. One should not be surprised to see suddenly we were moving as a ghost rider, on the wrong side of the road, because it seemed temporarily less congested there. It was a newly opened 4 lane highway divided by a concrete median. At certain spots the concrete quality seemed rather poor, so openings appeared and drivers were  too eager for switching over to drive against the traffic...
Our Guardian Angels had again a very busy day!!!
Lunch we ate at the Sheraton Hotel in Agra.
We were home before it got quite dark as we did not trust the mini lights of the Ambassador car and others and many without any lights!
On Tuesday August 9, we had a quiet morning till 11:00 when the wife of our usual Delhi guide who for 5 years always picked us up, came to take us shopping. At 14:00 we had a meeting with the General Manager from Madras, who just happened to be in Delhi. We had a good conversation with him and it helped that both of us worked for the same company.
Again we went with the same wife as guide into New Delhi, to the Lotus Temple which we this time could video tape. Also the estate from the president; Rashtrapati Bhawan (built in 1931) and the government buildings and India Gate.
We just could run to the car before a downpour!
We let her drop us off at the airport by 20:30 so nobody needed to look after us anymore...
We were early and after checkin with KLM Royal Dutch Airlines we observed something we'd never ever seen.
Russians with huge burlap bales, on which they walked and laid down...
When we asked our KLM agent, she said this was a daily drama with Ukraine Air to Kiev.
They can not even take it all home... they buy huge amounts of fabric rolls, let the Indians sew for a dollar a piece children- and teenage clothing and they stash that all in these burlap bags. In Russia they have a shortage and due to the lower wages in India they purchase it there.
How we would have loved to capture that but at Delhi airport photography or filming was prohibited. 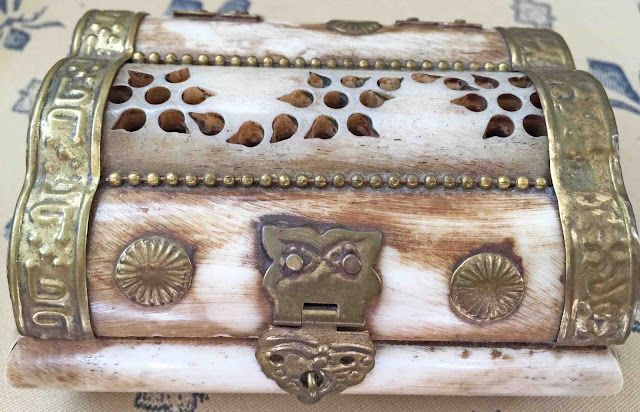 We found in one of the stores, beautiful boxes, cut out in a kind of lacework, made from camel bone! 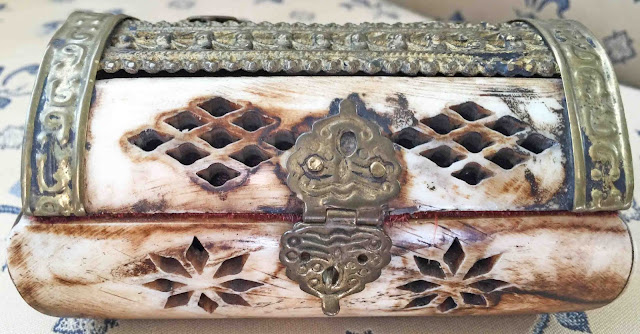 Never seen them before. They came from the dessert state of Rajasthan. What are those people artists!
Wednesday, August 10, we started boarding at 0:15... but when we were on the runway at 0:50 the captain stopped! The temperature indicator of one of four engines did not work.
They had to replace that and it would take 1.5 hour. We parked on an apron and the captain announced that the food had to be served meanwhile.
We had an upgrade on our Royal Wing card and got seated in the upper deck in business class.
By 8:00 the captain said we had to return to the gate... they couldn't find the problem.
We disembarked and went to the waiting room.
First they called all business class passengers + all passengers traveling to the UK.
So we were lucky since we had our upgrades!
We had to turn in our boarding passes for new ones on Air Canada for flying with them to London.
Then we had to walk to where the plane parked, for identifying our luggage on the pavement, so they could load it into the Air Canada plane.
We flew to London in 8 hours and 45 minutes, departure at 8:30 instead of 0:50...
We had left a note in Delhi for contacting our friends who would pick us up, as we parked our car with them. They got informed!
In London we got awaited by KLM Royal Dutch Airlines and after we retrieved our luggage they brought us by bus to the other terminal of Heathrow Airport.
Then we had to run for passport check and straight into the KLM plane that was waiting for us.
To Amsterdam with 106 stranded passengers from Delhi.
By 17:15 we were in Amsterdam, The Netherlands.
KLM did bring us to the Golden Tulip, Barbizon hotel (now Barbizon Palace) in Amsterdam.
Also a voucher for dinner and breakfast included.
Thursday, August 11, we went by shuttle back to the airport in Amsterdam and we flew with Delta to Atlanta, USA.
Plane was full and lots of smokers, so bad that the captain had to request to refrain from smoking for at least 15 minutes to refresh the air. How blessed we are now with non-smoking flights!

End of another India adventure...