My 4th Consulting Trip to India after HUGE Landslide

On Wednesday, January 5, 1994, we start our consulting trip to India aboard KLM Royal Dutch Airlines and with our Royal Wing Card, we both enjoyed once again an upgrade into Business Class.
Around noon on Thursday, we landed in Amsterdam, The Netherlands and after calling my Parents, we headed to hotel Ibis for some rest and a shower.
We departed for Bombay (Mumbai) India on Friday, around 10:30 and arrived on Saturday, January 8, by 1:00 at hotel Centaur Airport, the very same hotel Pieter stayed at during his DANGEROUS solo trip (see link below post).
We did rise early as we had a flight at 8:00 to Coimbatore.
From Coimbatore, the road by car up into the mountains and instead of the usual 2.5 hours it would take us today 3.5 hours because of a detour.
On September 30, 1993, the deadliest earthquake in Maharashtra, Mumbai, presumably caused an underground long tear, so the mountains shifted. 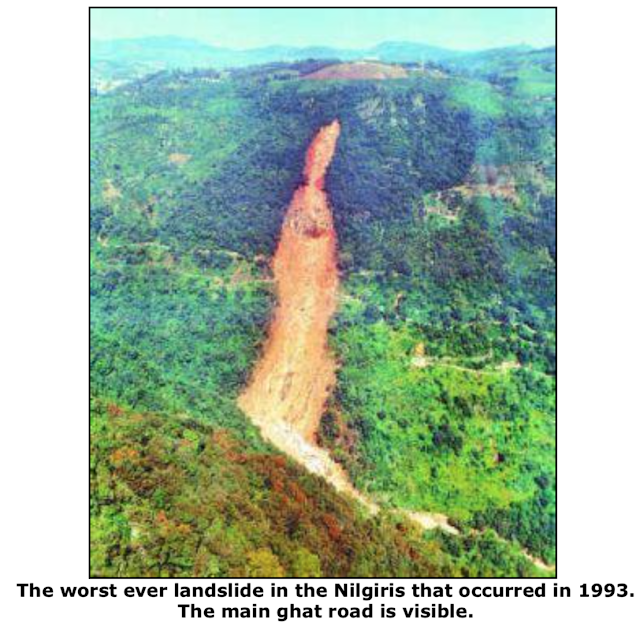 The Hindu Re-crowning the Queen of Hills click link for above image
From a distance we got to see this bare mountain side, it makes one skip a breath...
Mother Nature's POWER.

Read more: Landslide Hazard Mitigation in the Nilgiris District, India
There was another 'cloud burst' on 11th November 1993 in the upper reach of Marappalam of Coonoor Taluk, about 18 huts situated below the road and washing away Coonoor MTP ghat Road for about 1.5 km. The road traffic was suspended for more than a fort night. Twelve persons lost their live and 15 persons missing. It is said that 21 passengers were washed away with two buses. An important highway, sheared stretched of rail road for about 300m. 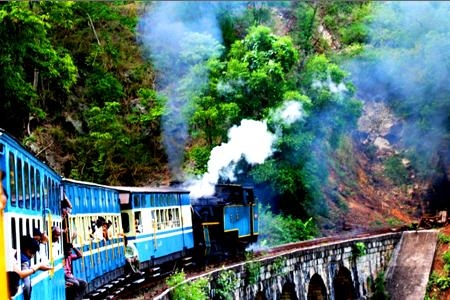 To the right, the landslide damage is still visible...
We both have seen the rail road, the one that we traveled once to work that stretch, was sticking up  in the air like matches! See below post about My 1st Trip to India...
Like a giant hand had stripped the entire mountain side bare, removing everything in its path...

We did arrive finally at our guest house in Ooty, Pieter was as carsick as one can get from the longer road up into the mountains.
That was on Saturday, January 09.
This guest house's shower was a rather puritan experience!
No window, but a hole in the wall, that was only provided with metal slats, which did not close...
We had a small electric heater, to turn in any case not completely blue from cold, from shower to bedroom.
This also helped us with getting into our clothes fast; just like a couple of drilled soldiers!
Keep in mind - this is HIGH IN THE MOUNTAINS! 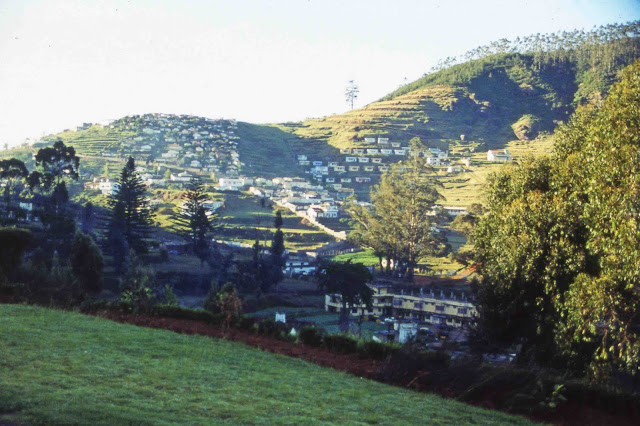 Lovely mountains... but rather cold and windy during the night!
On Sunday, January 10, we did drive through the mountains to the mushroom farm to start our work period together as consultants. 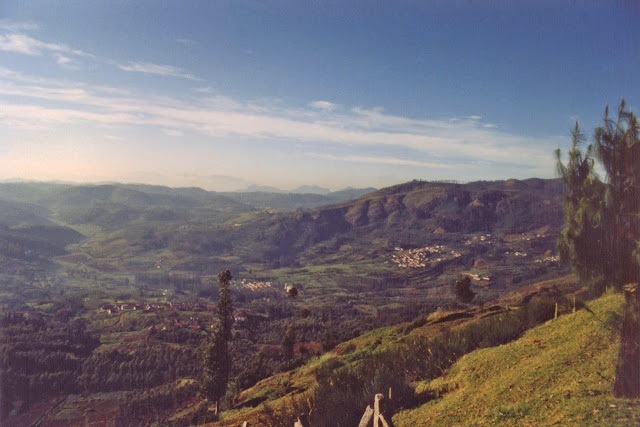 We always enjoyed our beautiful surroundings in the Queen of Hills 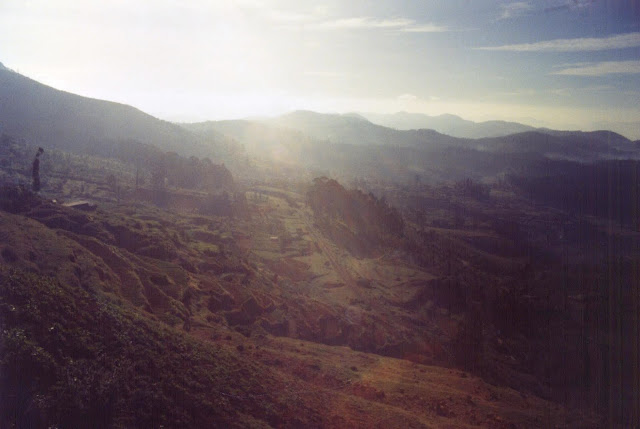 Mother nature can be rough at times but when the sun shines down, it looks awesome... 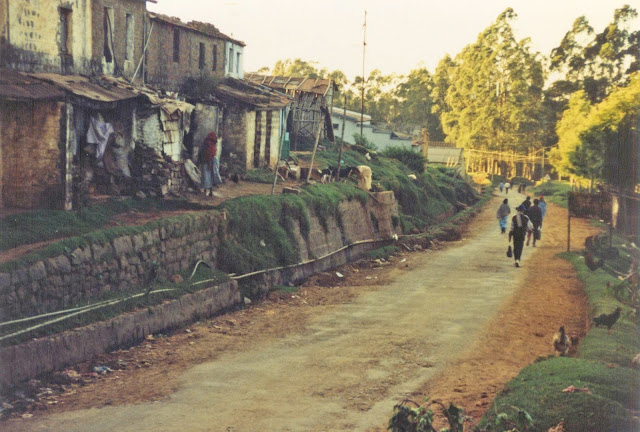 People in the mountains for sure are not wealthy...
This is how they live close to that mushroom farm. 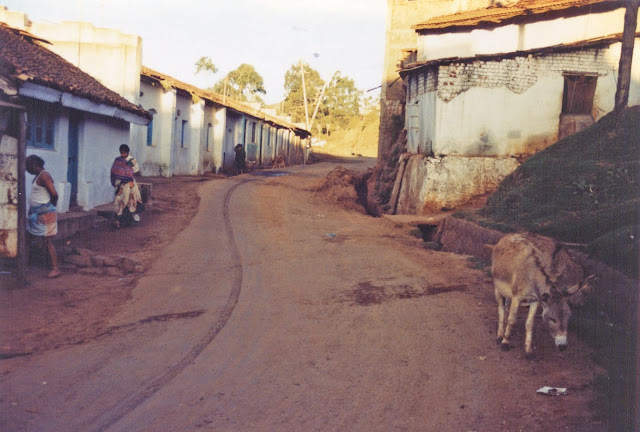 Two donkeys on the side of the road...
Yes, India is a vast country and one of many contrasts! 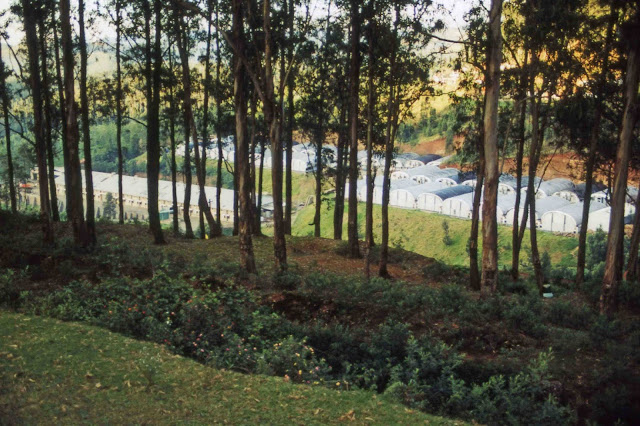 Looking down on the mushroom farm, visible through the trees. 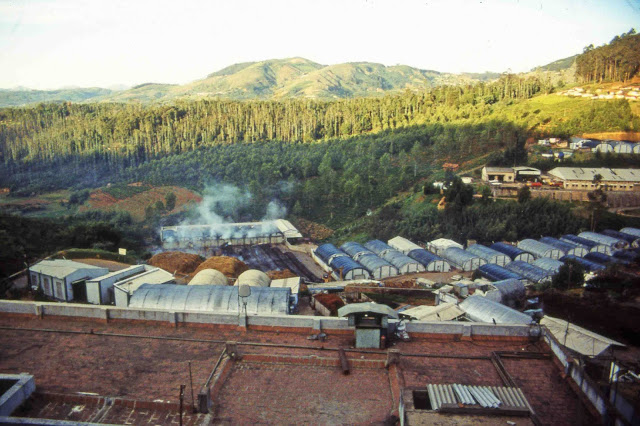 And here the mushroom farm is in full view... 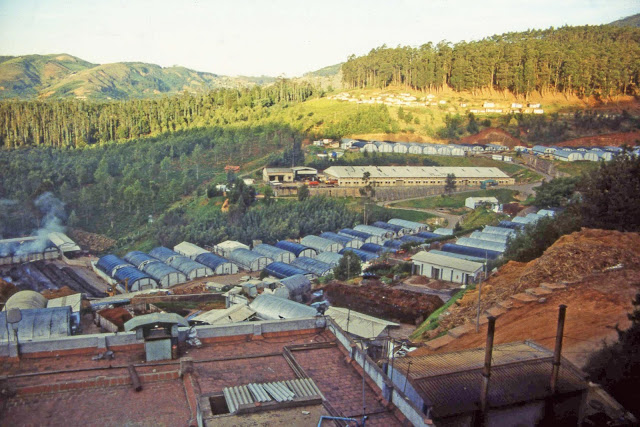 Of course it is hard to capture it in one shot!
We did work intensely for one week and on Friday, January 14, we left from the farm, after a meeting with the entire staff, on our way to Coimbatore.
This time we could travel via the normal route as of 14:00 o'clock that day, they had opened a Bailey Bridge, put in place by the military, to be used for light vehicles.
There was a sign: One Vehicle at a Time but we saw another vehicle coming our way!
It looked terribly scary! In Indonesia we saw more often a land slide but never such a devastation as here!
The two of us are never afraid, but we both know for certain that there is really such a thing as a Guardian Angel!!!
A miracle often, that we once again got out unscathed.
Also good to see up close such destruction from a natural disaster!
This teaches us once more very clearly, that there is still someone who is many times more powerful than we, small measly ants on this little globe.

We arrived in Coimbatore and traveled again, like the previous consulting trip together, by train to Madras (Chennai). This stretch of some 600 km we managed in 10 hours, in a first class sleeping compartment. Two rows of bunk beds for 4 people. Both of us slept at the top.
One staff member was with us and another unknown businessman.

We arrived around 5:00 and were being dropped off at a chic Sheraton Hotel (far more luxurious in India than here in the USA!).
After a shower and change of clothes, we had our usual wrap-up meeting with the general manager from Pond's India, at their main office in Chennai.
It took quite some effort and even courage for always being straight forward, but still righteous, to give our opinion about things and people. This was required of our job, being consultants...
We always felt relieved, when starting the return journey.
With our luggage packed up again, we left around 14:30 to the airport of Madras.
Flying to Delhi, first class; thus they found us worthy of that!
We met again with our contact person whom we had not seen in two years, because of our non-stop direct flight to Bombay (Mumbai) but on Saturday, there was no Bombay/Amsterdam flight. 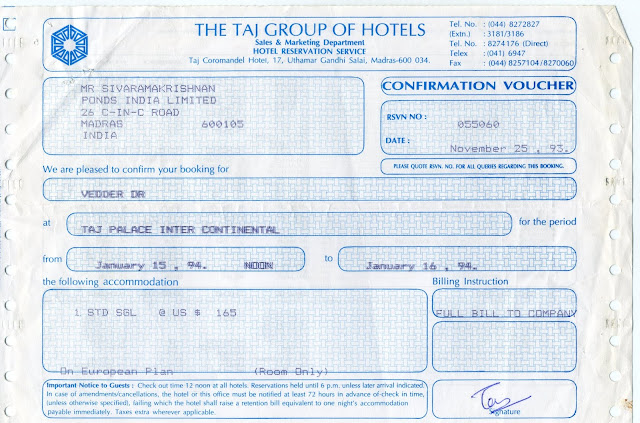 In completing the Royal Treatment, they brought us for one night to the Taj Palace Inter Continental Hotel...
Again, such a stark contrast with so many poor people in that country, such luxury for only two people!
We got up at 4:30 on Sunday, January 16 and started our flight back on Royal Dutch Airlines.
Again we got an upgrade to Business Class, due to our Royal Wing card and flew to Amsterdam, The Netherlands and on to Detroit, MI before going to Atlanta, GA.
Back in the USA...