Pieter has reached another milestone; literally this time! For flying 25 years with American Airlines. They did send him a very nice recognition. 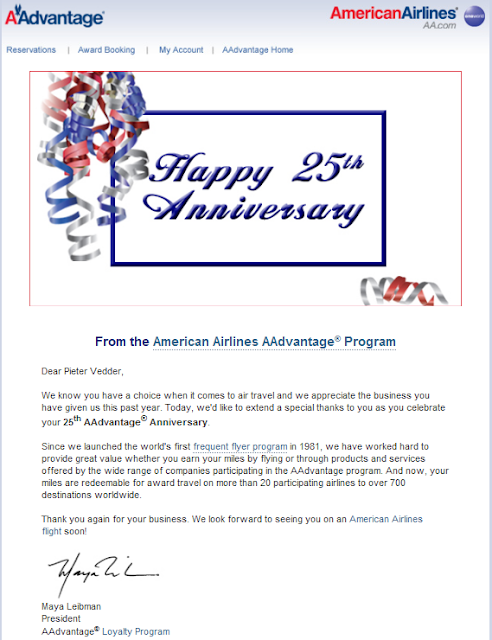 American Airlines launched the world's first frequent flyer program in 1981!
Visit American Airlines on Facebook: AAdvantage ← click it!
You should participate in their Mileage Junkie game for Dream Destinations, see below. 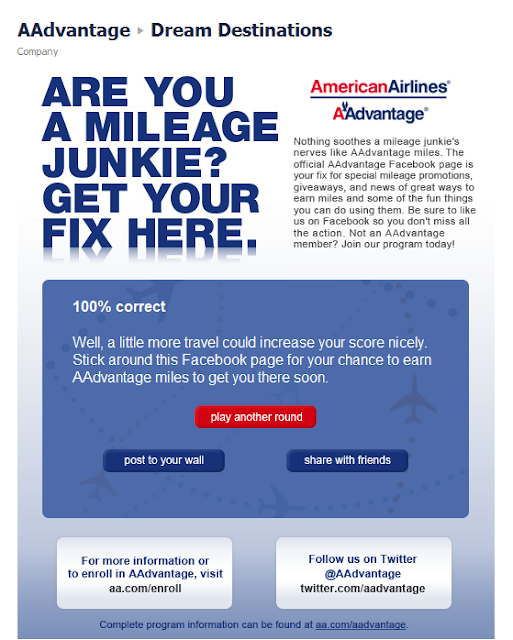 Pieter scored high; it is listed on his Facebook page. Tomorrow I have to try it too...
Pieter has traveled to more countries than I have. Only since 1989 when we worked always together as consultants, I accumulated lots of miles as well.
Let me cite some interesting writing from April 30, 1993 from our local newspaper, written by columnist Bo Whaley who was 'Uncle Bo' for me.
He wrote about Pieter having become a New Citizen of the United States on Friday, April 23.
Uncle Bo injected a note written by me:
"So that's it. Last night I slept for the first time with an American! It feels great, just as I expected it to be."
Can you guess how much my "Flying Dutchman" was up there flying all over the world in those 10 years since we came to America?
A total of 784,706 miles, or more than 31 times around the world.
Roughly this means 1,256 hours or 31 weeks. (Like being part-time divorced).
I often joined Pieter up there, though I started out too late and never caught up with him.
My score was "only" 338,221 miles, roughly 541 hours or 13½ weeks of "marriage" up there with him.
Now they cut back on my "wing" time, too, I join him on all flights.
And my favorite song is "I Will Follow Him Wherever He May Go."... just click to see André Rieu in Maastricht, the capital of my Province of birth perform.
Very true so far!
Posted by Mariette VandenMunckhof-Vedder at 2:13 AM

Email ThisBlogThis!Share to TwitterShare to FacebookShare to Pinterest
Labels: American Airlines, Consulting, I Will Follow Him, Travel