In our home we have a framed print from Philips Melville, from the salute of 11 guns from the Dutch island of Eustatius in the Caribbean to the Andrew Doria that was flying the American Flag. Thus making the Dutch the first foreign nation to salute to the American Flag. This was in November of 1776. Read more: Andrew Doria, scroll towards the bottom. This was given to us on one of the official Dutch American Heritage Days, in Atlanta. 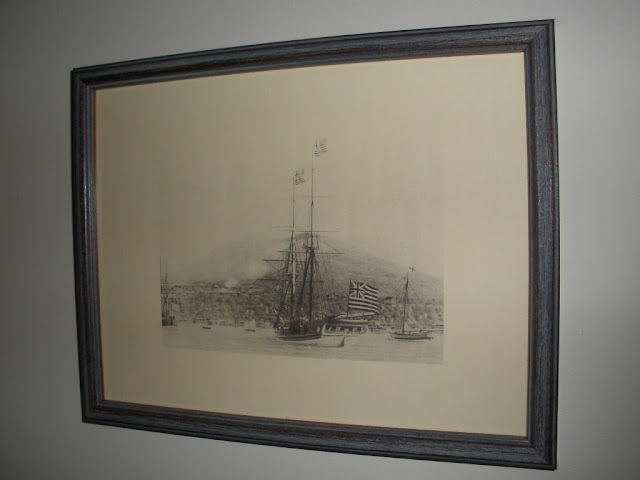 Andrew Doria receives a salute from the Dutch fort at St. Eustatius, 16 November 1776, the first rendered to the United States Flag by a foreign power, as depicted in this painting by Philips Melville. 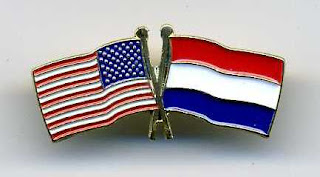 By the President of the United States of America, George Bush

On November 16, 1776, a small American warship, the ANDREW DORIA, sailed into the harbor of the tiny Dutch island of St. Eustatius in the West Indies. Only 4 months before, the United States had declared its independence from Great Britain. The American crew was delighted when the governor of the island, Johannes de Graaf, ordered that his fort's cannons be fired in a friendly salute. The first ever given by a foreign power to the flag of the United States, it was a risky and courageous act. Indeed, angered by Dutch trading and contraband with the rebellious colonies, the British seized the island a few years later. De Graaf's welcoming salute was also a sign of respect, and today it continues to symbolize the deep ties of friendship that exist between the United States and the Netherlands.
After more than 200 years, the bonds between the United States and the Netherlands remain strong. Our diplomatic ties, in fact, constitute one of the longest unbroken diplomatic relationships with any foreign country. Read more: The Hague US Embassy. Click on Friendship Day

Posted by Mariette VandenMunckhof-Vedder at 6:12 PM