From my favorite Victoria Magazine I had saved these two pages that I love to share with you. Some readers have indicated as never having seen knife rests before. Well, they have been around for quite a while. For your convenience I will re-type the text here below the images. For sale at my: Spectrenoir you can view several silver plated French knife rests from Christofle. Replacements Ltd. does have some crystal ones from Lalique, France and such. 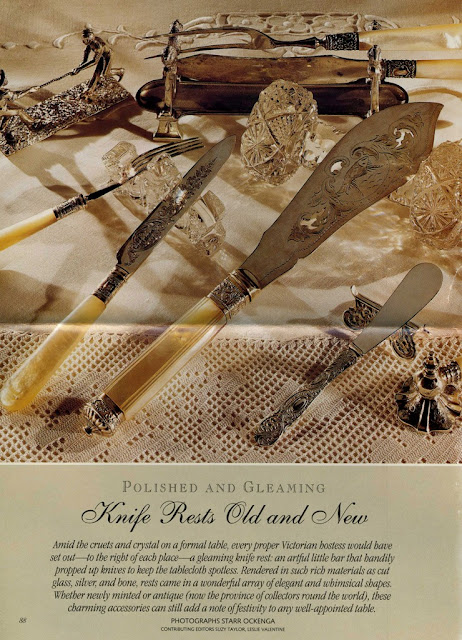 Polished and Gleaming
Knife Rests Old and New
Amid the cruets and crystal on  a formal table, every proper Victorian hostess would have
set out—to the right of each place—a gleaming knife rest: an artful little bar that handily
propped up knives to keep the tablecloth spotless. Rendered in such rich materials as cut
glass, silver, and bone, rests came in a wonderful array of elegant and whimsical shapes.
Whether newly minted or antique (now the province of collectors round the world), these
charming accessories can still add a note of festivity to any well-appointed table.
PHOTOGRAPHS STARR OCKENGA
CONTRIBUTING EDITORS SUZY TAYLOR, LESLIE VALENTINE 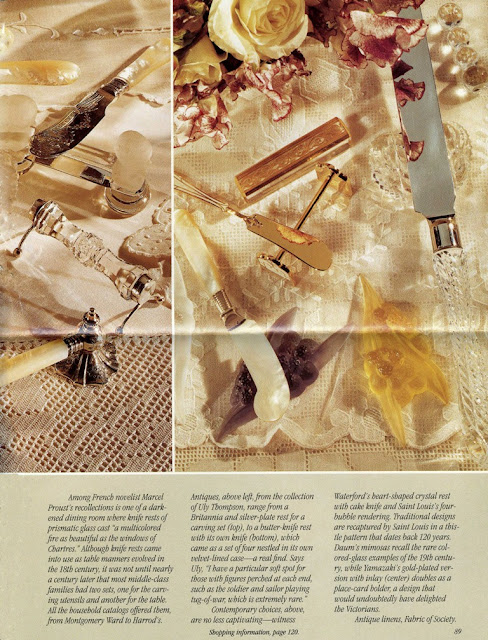 Among French novelist Marcl Proust's recollections is one of a darkened dining room where
knife rests of prismatic glass cast "a multicolored fire as beautiful as the windows of Chartres."
Although knife rests came into use as table manners evolved in the 18th century, it was not
until nearly a century later that most middle-class families had two sets, one for the carving
utensils and another for the table. All the household catalogs offered them,
from Montgomery Ward to Harrod's.


Antiques, above left (top photo), from the collection of Uly Thompson, range from a Britannia
and silver-plate rest for a carving set (top), to a butter-knife rest with its own knife (bottom top
photo), which came as a set of four nestled in its own velvet-lined case—a real find. Says Uly,
"I have a particular soft spot for those with figures perched at each end, such as the soldier
and sailor playing tug-of-war, which is extremely rare."

Contemporary choices, above, are no less captivating—witness Waterford's heart-shaped
crystal rest with cake knife and Saint Louis's four-bubble rendering. Traditional designs are
captured by Saint Louis in a thistle pattern, that dates back 120 years.
Daum's mimosas recall the rare colored-glass examples of the 19th century,
while Yamazaki's gold-plated version with inlay (center) doubles card holder,
a design that would undoubtedly have delighted the Victorians.
Antique linens, Fabric of Society.

Posted by Mariette VandenMunckhof-Vedder at 6:24 PM