{Like Princess Diana, I also Tried to Tackle the Leprosy Stigma}

So many people have told us that they envied us for all our travels. Well, let me share with you our trip # 3 to Indonesia for Consulting. That's right - NOT vacation!
It was the exact same day that Princess Diana was staying in Jakarta, she did visit the Sitanala Leprosy hospital to shake hands with those patients in order to tackle the stigma.
1989, November 04, Princess Diana at the Sitanala Leprosy Hospital Indonesia ←just click the link.
We flew on KLM Royal Dutch Airlines, from Treviso, Italy where we were living at the time, via Amsterdam, The Netherlands to Dehli, India and on to Singapore for one last stop before reaching Jakarta, Indonesia.
By 18:00 o'clock we sat in our taxi on our way to the hotel and we departed Jakarta on the 7th of November, 1989 to the center of Java where we actually worked.
We had no idea that we were spending those two nights in Jakarta while Princess Diana was there at the same time.
Below you see me, at the very same Leprosy hospital where Diana visited, only several years later... 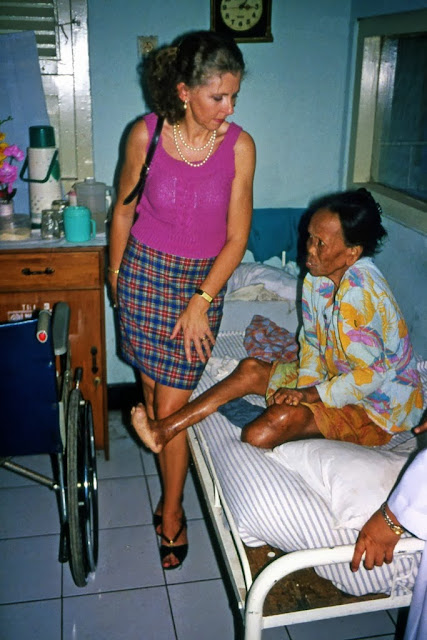 This is on November 16, 1997 and trip # 19 to Indonesia for work.
From Atlanta, USA to Amsterdam, The Netherlands where we had a layover of 12 hours.
We killed that time by making phone calls with my Parents. Called my youngest sister Gert and obtained from her the telephone number of the hospital where my sister Diny just had had surgery on her shoulder. Calling with Pieter's brothers and on to Singapore, non-stop in some 13 hours.
One hour layover and the last 1-½ hour to Jakarta, Indonesia. Two nights on the plane...
You bet that once we arrived at the hotel by 19:00 o'clock we only needed some fruit, a good shower before finally hitting the mattress.
Next day around noon we went to the Jakarta leprosy hospital and to the compound where about 800 leprosy families were living. We knew a German Jesuit, Siegfried Binzler, with whom we worked for handing him the money we collected from our local Rotary Club, Rotary Club of Savannah West and friends. I say 'our' even though I myself have never been a member but for decades I've always supported husband Pieter with these international projects. Pieter has been a Rotarian since May 11, 1976.
We did hand Father Binzler US $ 9,030 on November 16, 1997 and he was quite surprised. 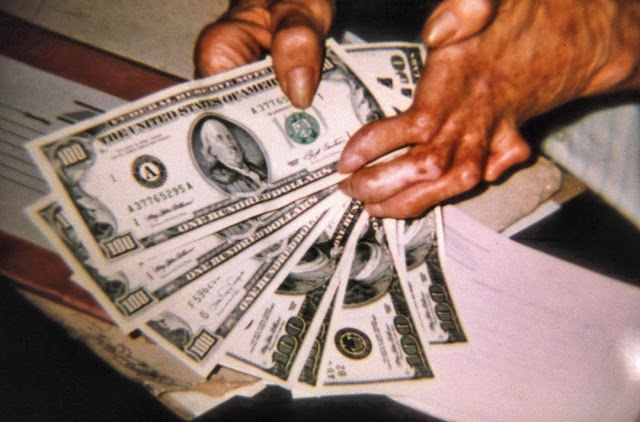 This was on June 3, 1997 when we did hand over the very first US $ 1,000 in cash to the administrator of the Leprosy compound, an ex leprosy patient himself. Look at his hands... He was lucky that they saved his fingers and hands by surgery. Splitting the tendons in two for functioning in another finger, with lots of therapy over the duration of several years. Most people don't have the money for it so they just have no choice other than to amputate... 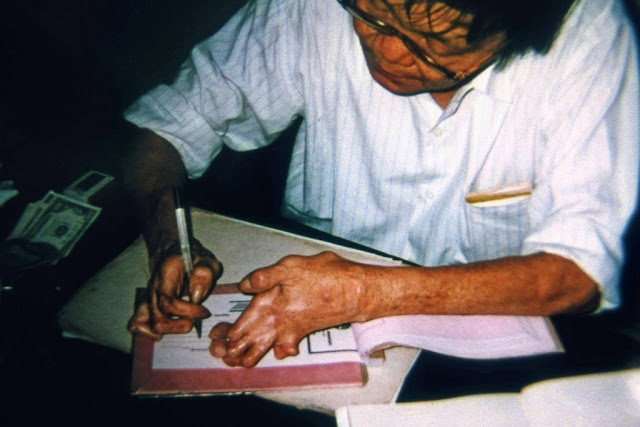 Here the ex-leprosy administrator is signing the receipt for the US $ 1,000 for us to carry back home to our Rotary Club. Mission accomplished...
100% being used for the cause! 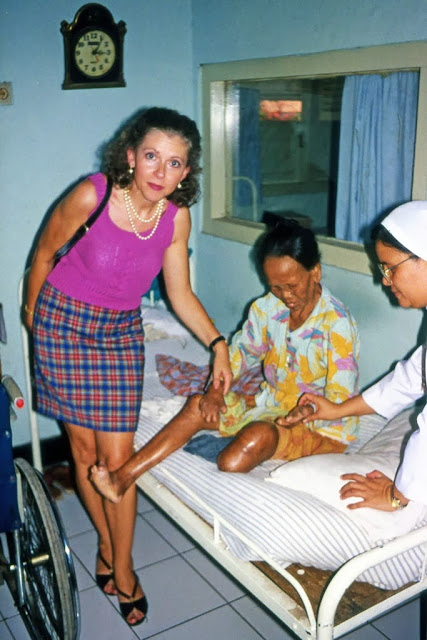 Now back to November 16, 1997...
This poor soul has one leg amputated and the other foot is severely infected, and also both her hands... Just imagine having to live like that!
We never complained about jet-lag after sitting two nights in a row on the plane; that is pure luxury compared to the life of all people with leprosy!
We did this always the next day after arrival, to get the money and other goods to safety first. Than we would travel on to our work area.
Talking about luxury, me happily wearing the Majorica crema rosa pearls that Pieter gifted me at the Amsterdam tax free shop... 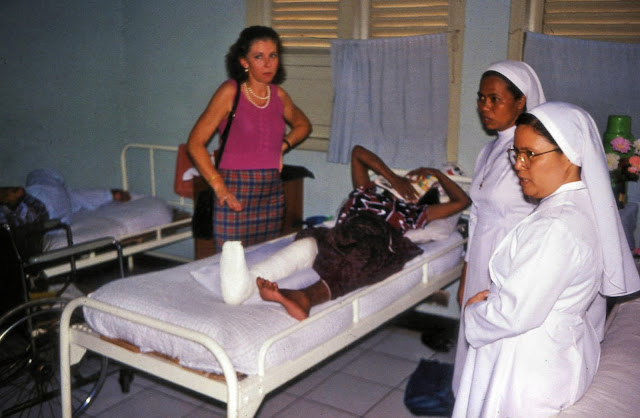 It really hurts when you see a girl covering her face (that too was affected!) so I signaled to Pieter that he had to put the camera away... But we HAD to bring home material in order to raise more awareness for the need of money to support the poorest of the poor for giving them a prosthesis.
This girl had had surgery on her leg.
Speaking their language, I engaged in conversation in order to distract them from the camera.
Husband Pieter had to zoom in as you absolutely cannot hang with your camera above their misery.
This hurts like hell and when you return to the hotel, with a mega headache you need time for getting all that misery out of your system. And yet, you want to SCREAM at the world for awareness. These poor souls become OUTCAST of society due to the stigma around leprosy. Also their family becomes outcast. But behind the hospital there are only a few square kilometers where already at that time about 800 families lived... and how can they make a living?!
Princess Diana visits the Jakarta Leprosy Hospital, in November 1989 ←click link.
Do you recognize the exact same beds and room? Mind you, there is NO air conditioning and only the bare minimum as you can see. 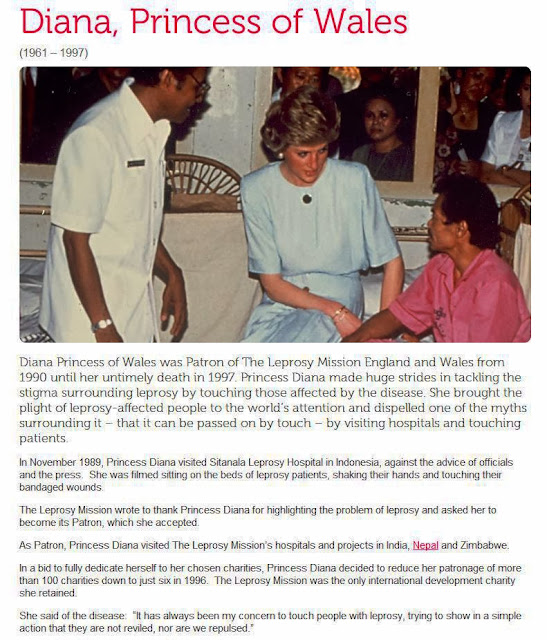 Diana Princess of Wales was Patron of The Leprosy Mission England and Wales... ←click link. Princess Diana made huge strides in tackling the stigma surrounding leprosy by touching those affected by the disease. She brought the plight of leprosy affected people to the world's attention and dispelled one of the myths surrounding it - that it can be passed by touch - by visiting hospitals and touching patients.
Below post you can also see a video from Princess Diana's Leprosy hospital visit in Jakarta, Indonesia... 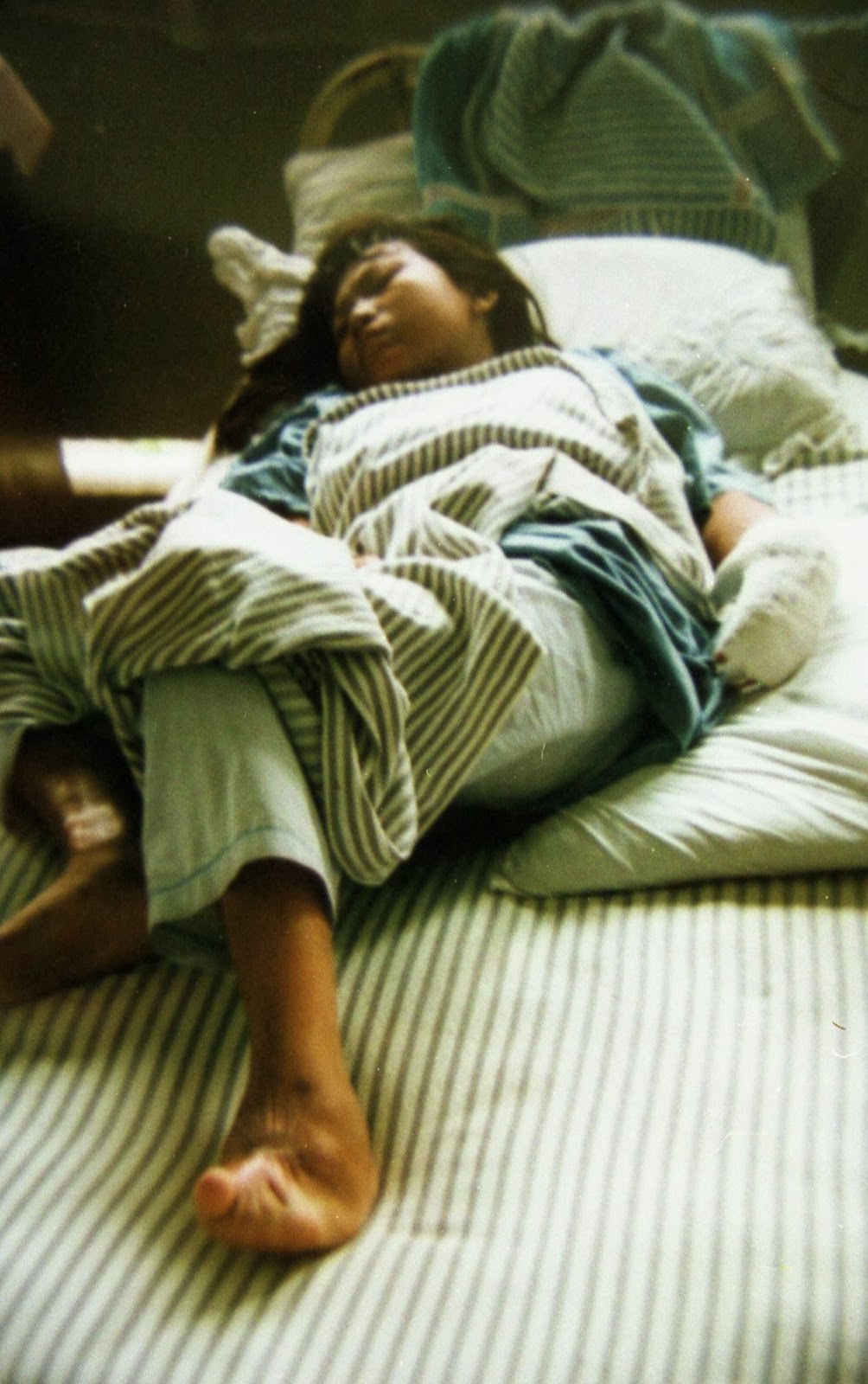 Back again on New Year's Eve of 1998.
That's right; December 31, 1998.
This girl lie there moaning, just out of surgery on he hands... Look at that foot.
A beautiful teenager and so mutilated for life!
Worse; being OUTCAST for life... 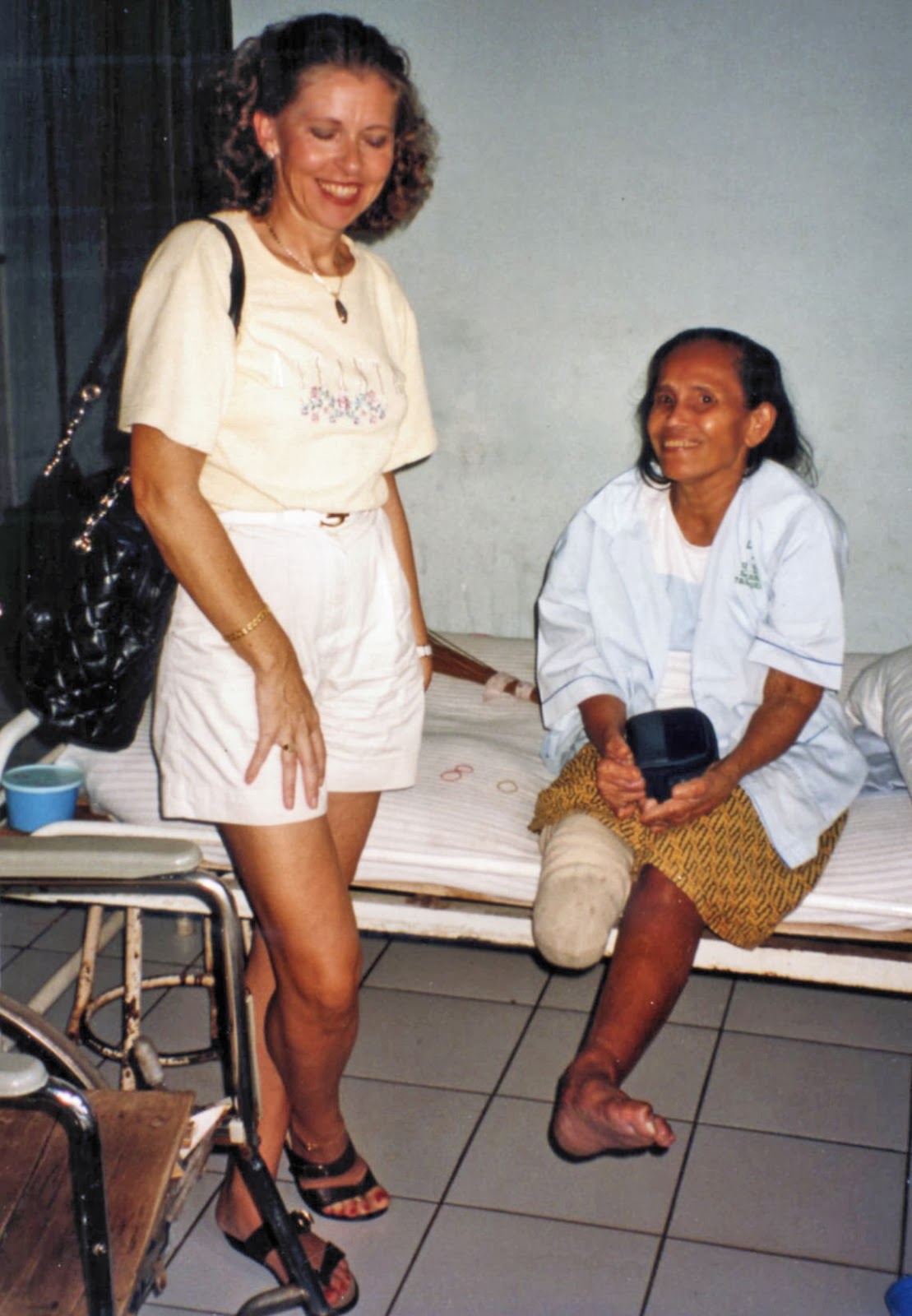 This woman received a new prosthesis from our Rotary Club.
In 1989 she received one through Princess Diana's visit and it was worn out.
We did deliver US $ 8,500 this time and $ 1,100 from other friends.
We also had started to collect those toiletry bags from KLM which we received aboard our flight when we got an upgrade into business class when economy was sold out. We saved them up and brought them all with us to hand out to these poor souls.
BUT, how you want to dissolve after having handed out the LAST one...
You would need a truck load for actually giving something to all!
Yet, they always smiled and were so happy and when I asked them they were quick to reply: 'We believe in a better life after this!'
Those leprosy patients taught us so much.
They really understood to give back so much with their gratitude. 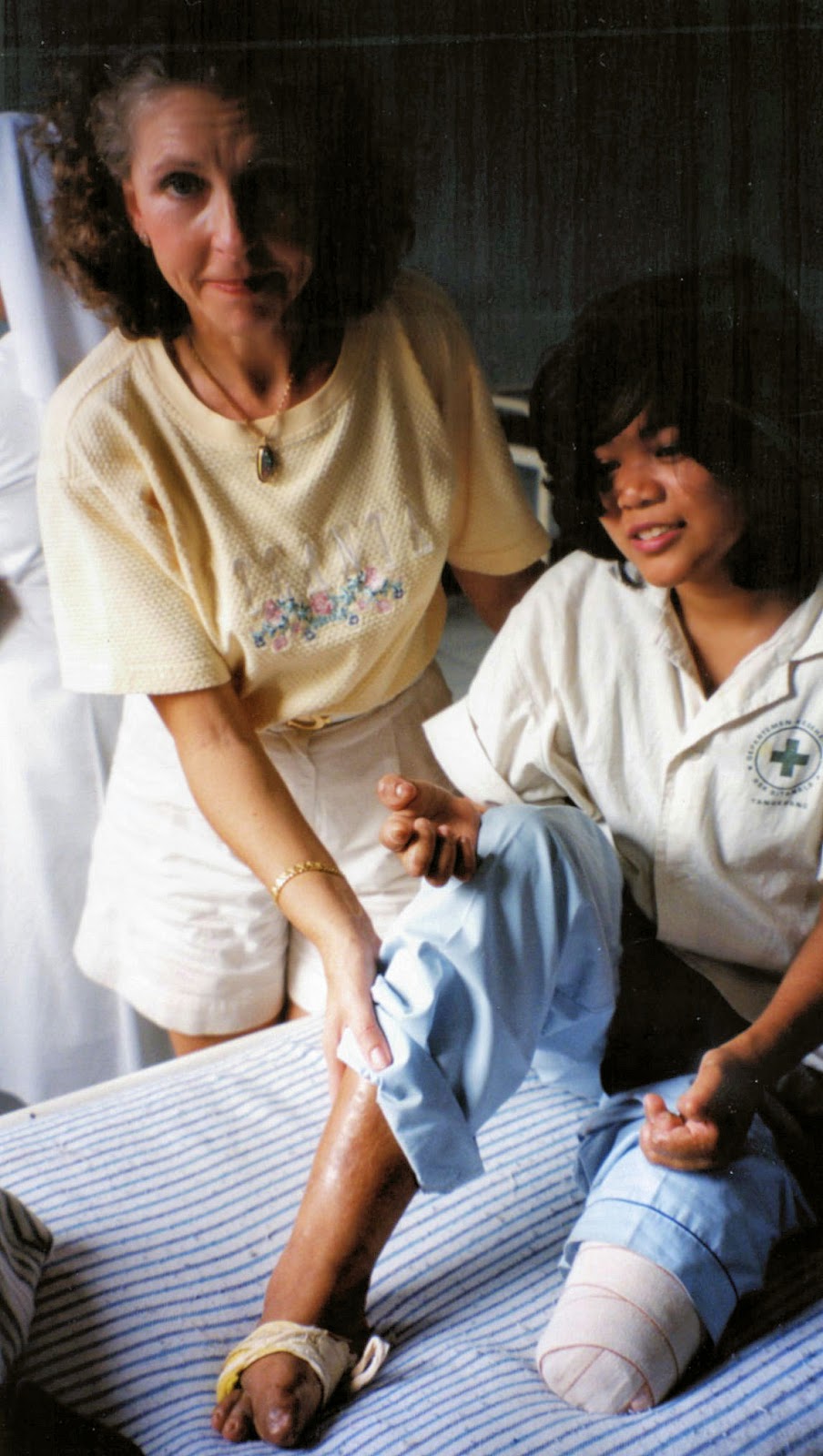 Sorry for the poor quality scans, this is not from an actual slide as I have yet to find it.
This is Sanah, she had her leg amputated and was told the other foot had to go and also her hands.
That is when we stepped in for saving her hands at least through surgery and tedious therapy and more surgery by splitting the tendons.
Speaking the language has proven to be very beneficial.
Who would have thought that I would be in the country of my Great-Uncle 'Heeroom'; guess he has guided me from heaven, many times! See post about him below... 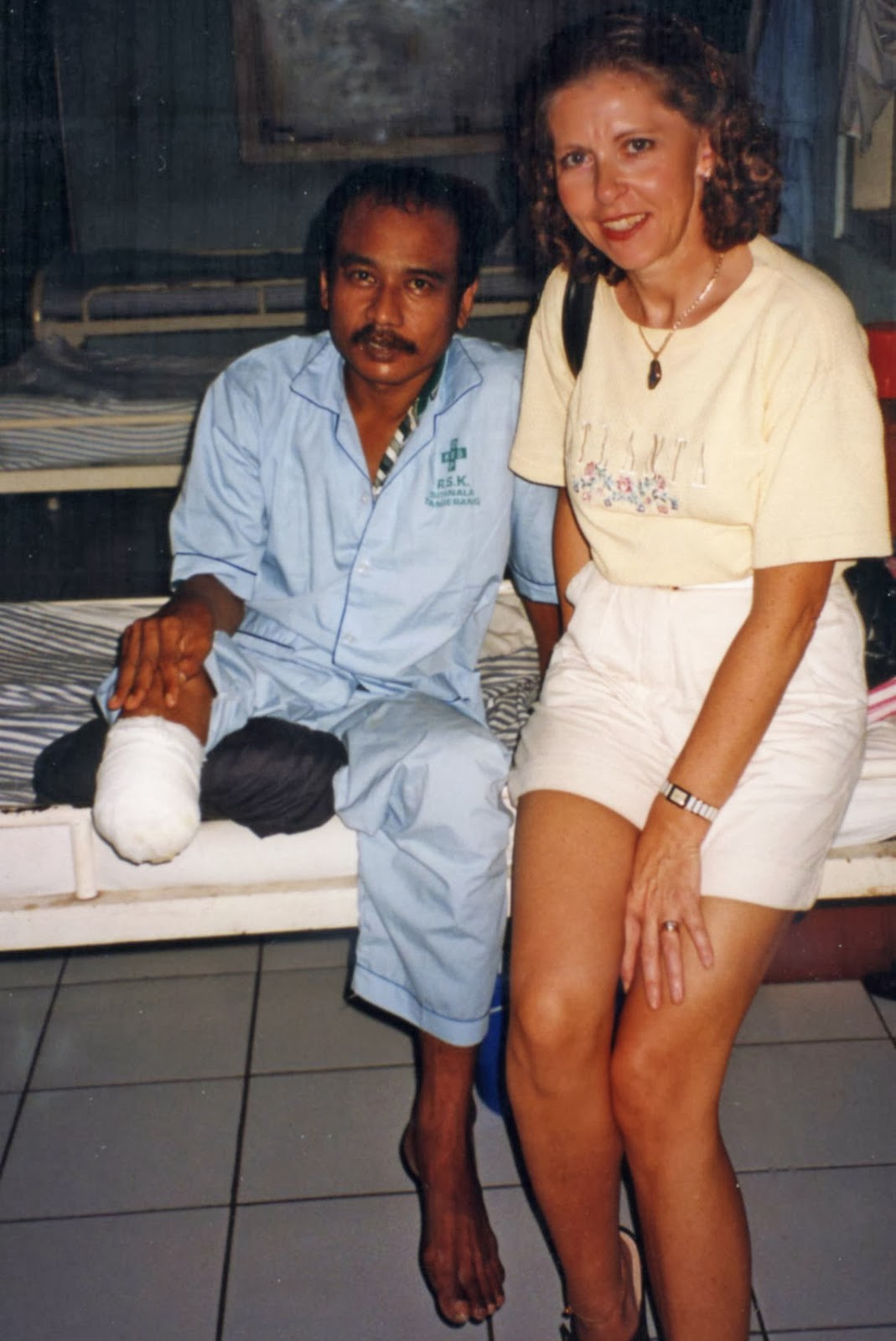 What can you do?
What to say... there is so much suffering and it looks like the entire world is looking the other way... ostrich politics. When you don't want to see it; it is not there.
These poor souls have no voice and their disease is not political correct for receiving aid; like for HIV.
This New Year's Eve of 1998 was quite shocking for us.
There were still military on the leprosy compound for protection.
Also near our hotel were military patrolling and they had their tents set up.
To me that Thursday trip looked closest to a war zone that I ever saw. Of course, husband Pieter lived through WWII but the video tape we took from some 6,000 burned and vandalized banks, shops, car dealers (mostly Chinese Christians) made quite an impression. The riots from May and November totaled 1,200 deaths.
We did go shopping, for my niece Maartje I got 2 dresses and we were in bed by 21:00 o'clock after a little bite - WORN OUT! That was our non-glamorous New Year's Eve for 1998... 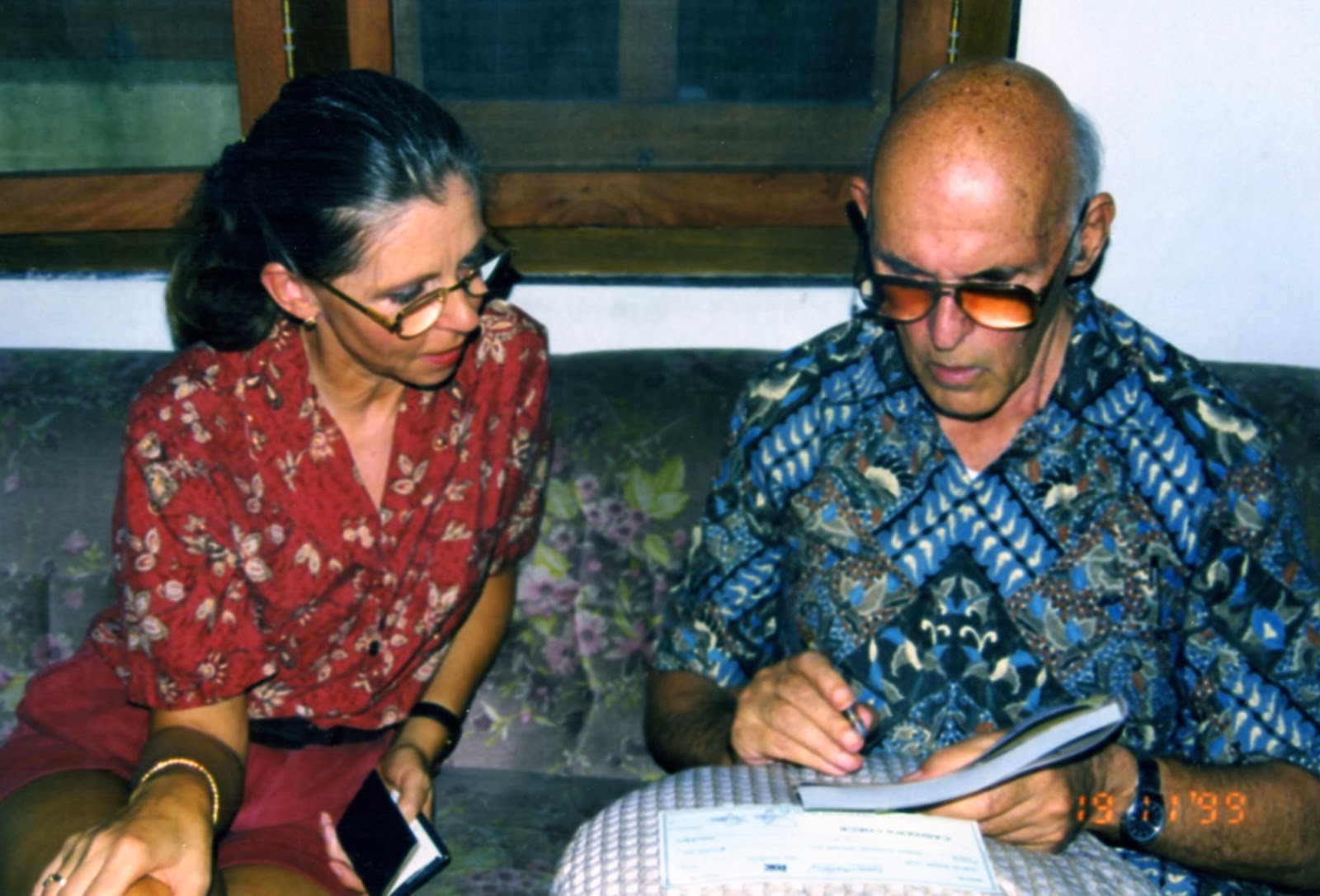 Saturday, November 20, 1999 with German Jesuit Siegfried Binzler.
Back again for delivering some Cashier checks and US $ 13,120 this time. Our local Rotary Club has supported the Leprosy victims in Jakarta for years. Photo shows US time, hence the different date as Indonesia is 12 hours ahead.
You bet that I felt so relieved each time for arriving safe with all that cash in my purse... quite a responsibility. 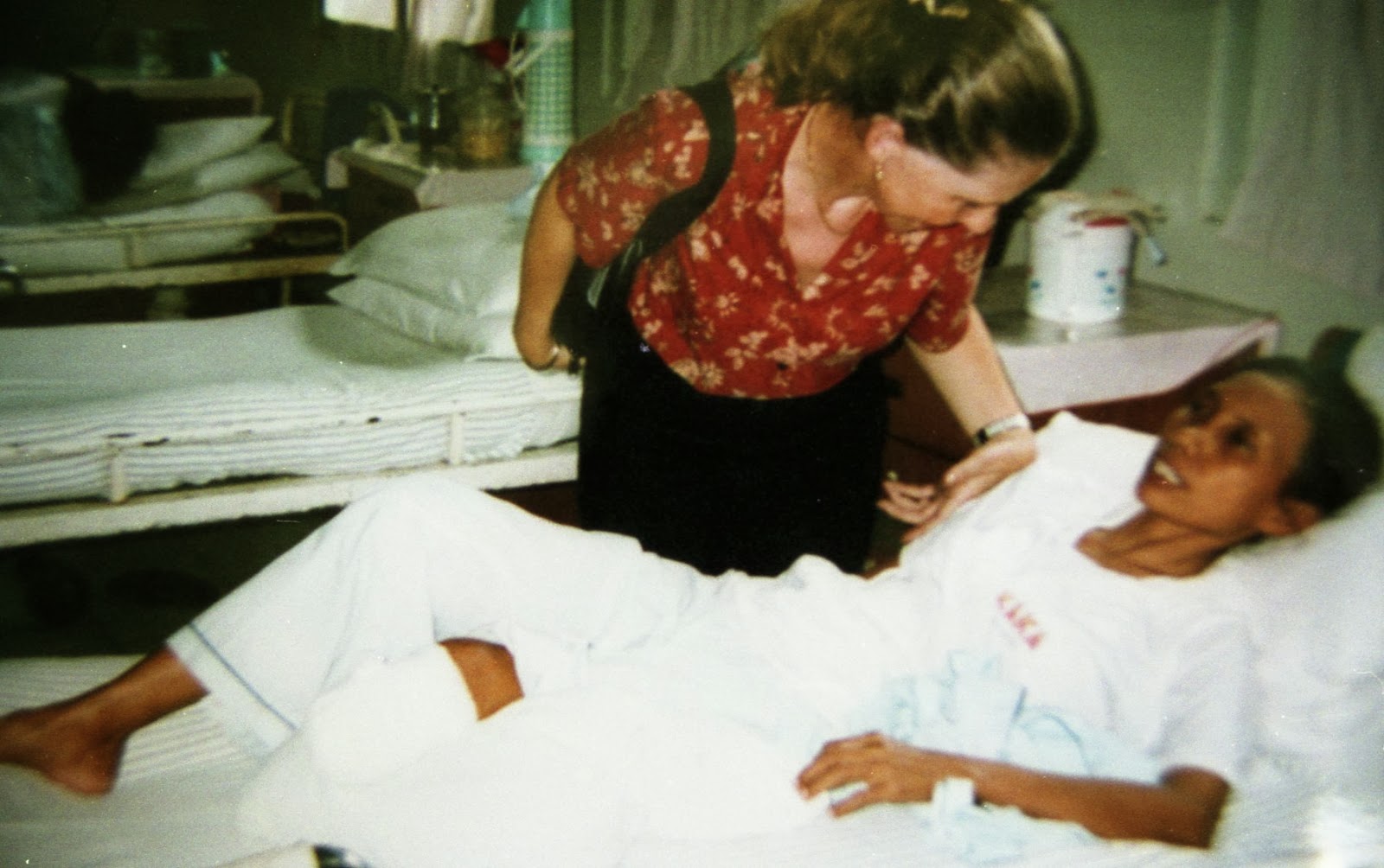 Again, making the rounds in the Leprosy hospital as so many times before... Aside from cash money we always did carry as many clothes and things we could take with us.
Our allowance with the Royal Wing Card from KLM was like that for business class and we did carry each 2 heavy suitcases (at that time 32 kg each was allowed!) + heavy carry on + totes etc.
We never did shun the load as it brought so much joy to so many. Here are lots of clothes we received from a Jewish friend. for taking with us; some were new and all in a small size, so the Leprosy male could wear them.
Most US sizes nowadays would be way too large. 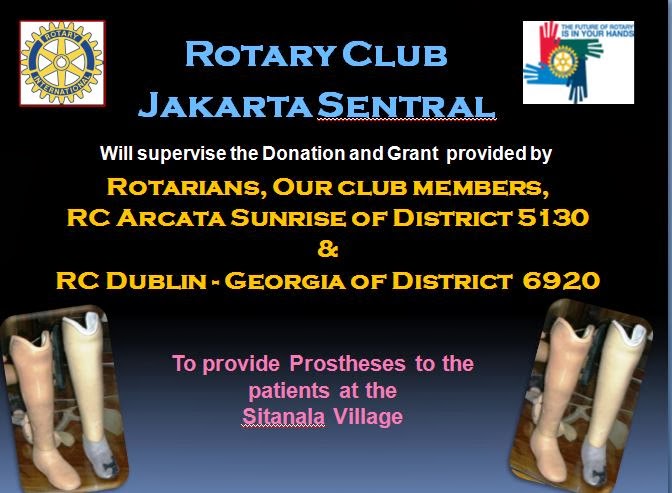 We no longer went to Indonesia after 2001, our trip # 21 but the Dublin Rotary Club has continued for many years to send funds, now using our liason John H. G. Soe from Rotary Club Jakarta Sentral.
Photos posted on Flickr ←click link our combined Leprosy Project for which we earned a Matching Grant from Rotary International in 2010, you can see when clicking on the hyperlink. Many wheel chairs and prosthesis could be provided in order to make life more bearable for those poor souls.
All those years of involvement in charity for the poorest of the poor, did change us quite a bit.
We cannot participate in the hype for shopping and more shopping around Christmas.
It is a harsh world with too stark contrasts and most people never even stop for a moment from their ongoing rush to more, bigger, better—their Credo for the twenty-first century.
There is more in life and being content and trying to share and reach out provides us with real happiness.
We always have shared and given to others freely. Since we do live off one pension with three adults; Pieter's ex and both of us, we no longer can afford to generously gift relatives the way we used to.
What we learned from it is that they became kind of dependent on it and more or less expected us to bring each time special gifts for them. They smiled but did it foster gratitude?
I doubt it, as we seldom hear from any of them. They are all so involved in their own little world of racing with all others through the never-ending WANT...

May you all have a blessed Christmas in the true meaning and may you find Peace!

Posted by Mariette VandenMunckhof-Vedder at 5:21 PM