Okay, in my previous post I did write about the reason for ending up at The Roosevelt in New Orleans. So let's look around a bit in this remarkable city.
We did stay for one night at the Howard Johnson, Downtown New Orleans.
Next day after Mass, at the Moorish Jesuit Church across the hotel, we did walk with a Dutch business friend and a Chilean business man to French Quarter.
We moved to The Roosevelt in the afternoon. 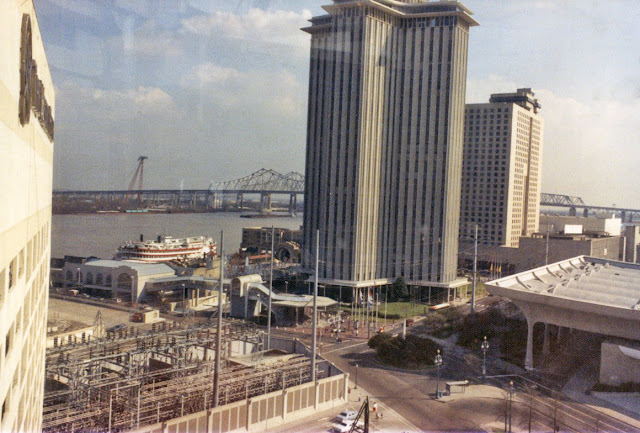 On the wall to the left are the letters The Fairmont, as The Roosevelt was still called on March 6, 1988.
But our view was spectacular!
The mighty Mississippi river... 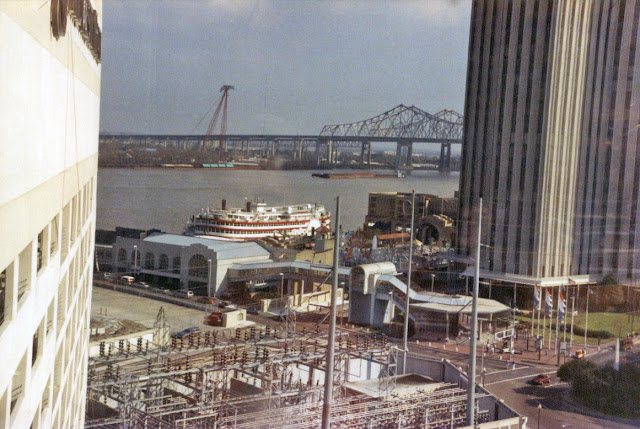 This photo is a bit more zoomed in.
We viewed actually the New Orleans Cruise Terminal! 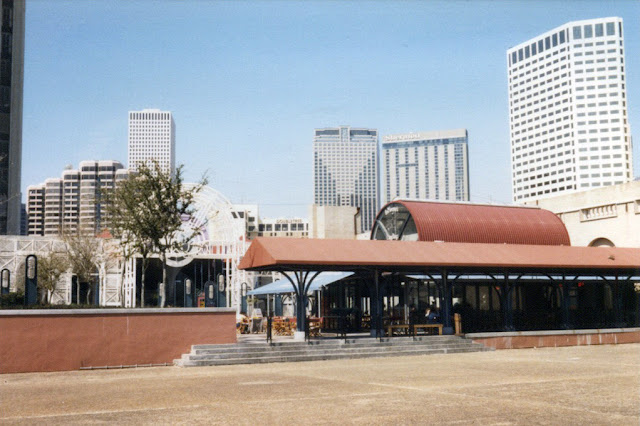 Right from the back of our hotel.
2nd from right is the Sheraton hotel. 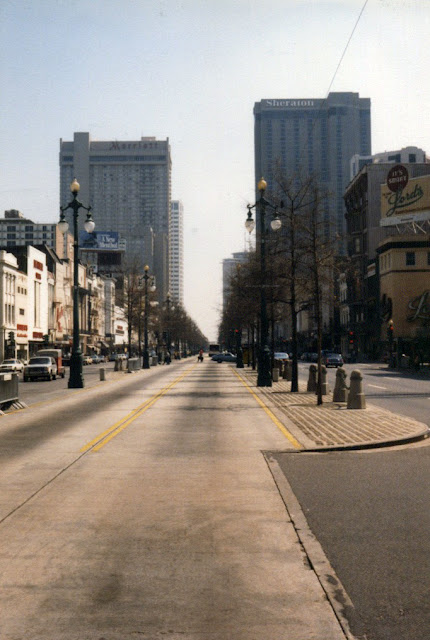 To the left is the Marriott and to the right the Sheraton, as we walk on Canal St. near Carondelet St. 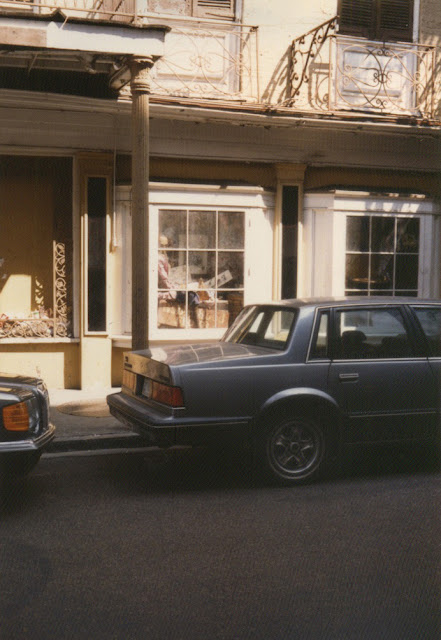 French Quarter with its typical balconies and lots of wrought iron. 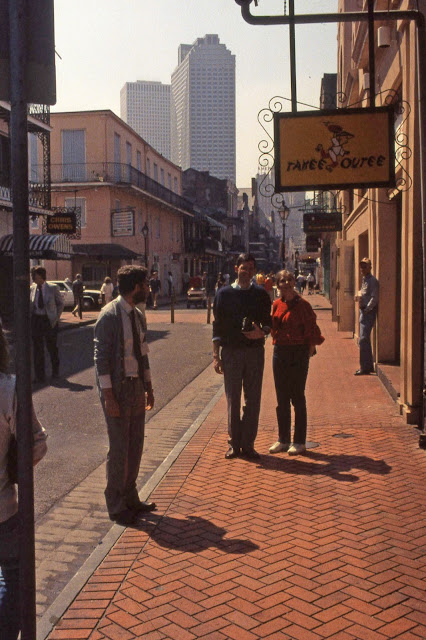 Husband Pieter took this photo as we stand here on 500 Bourbon St, New Orleans.
The Chilean gent to the left and Dutch business friend Anton van Overveld in the center. 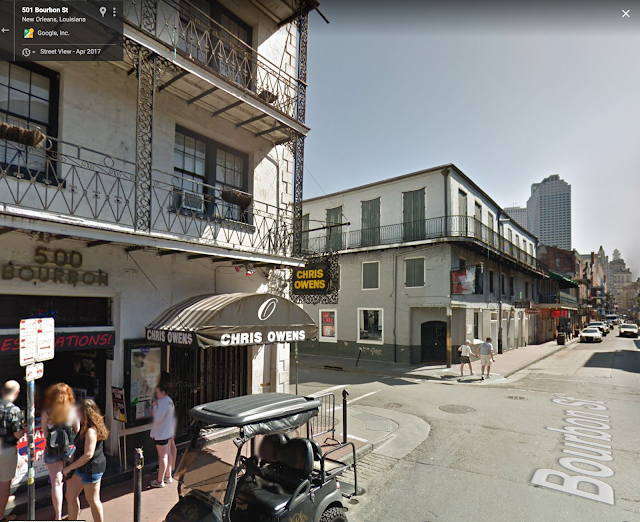 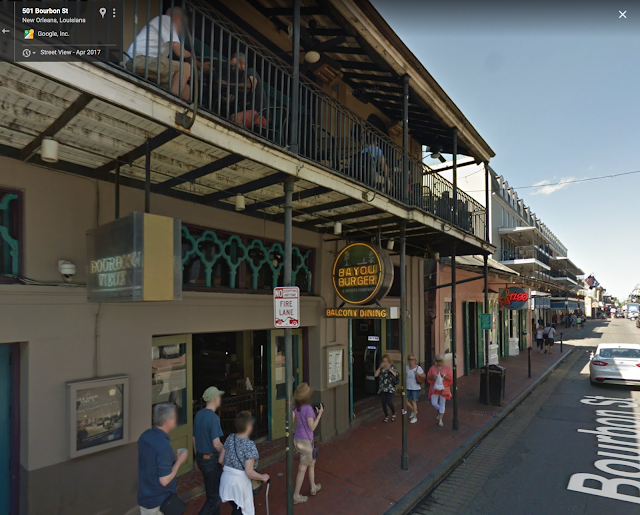 From the same link here above, you get a perfect view of what I was looking at in the above photo.
A bit scared for those protruding balconies with tables and chairs of Bayou Burger Balcony Dining!
The sign from 1988 with Takee Outee is gone... 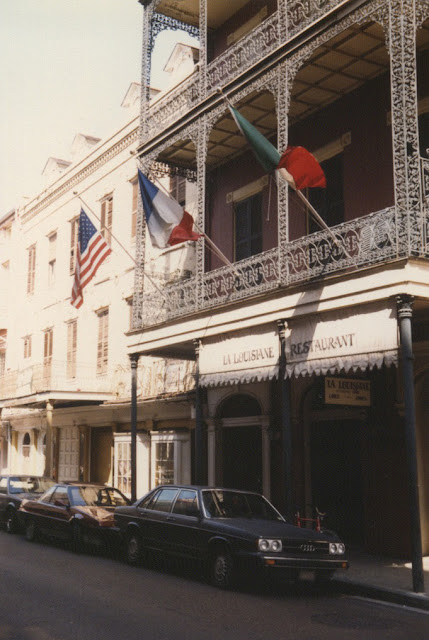 La Louisiana Restaurant at 725 Iberville Street, built in 1837...
To read about the History of La Louisiana New Orleans, just click the hyperlink.
You do have the feeling that you're back in the Old World, in France! 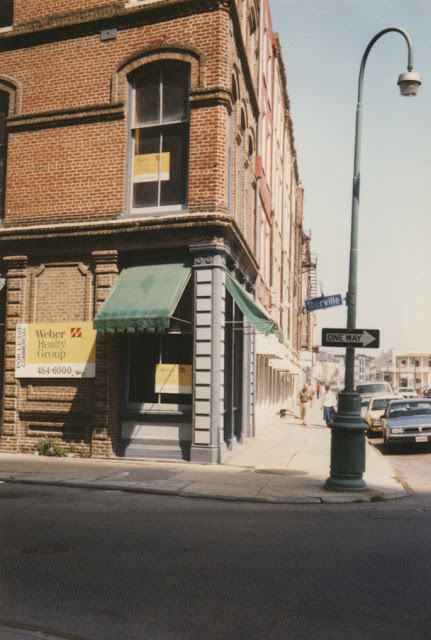 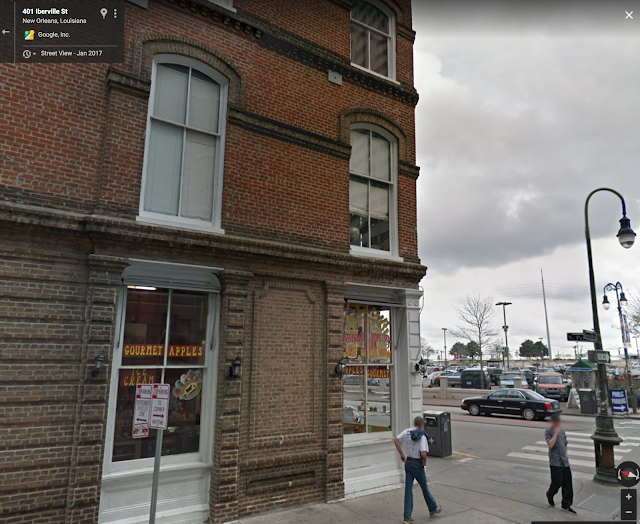 Yep, this Google 401 Iberville St New Orleans Street View shows it still is there!
Click on link to be shown the exact wall in photo. 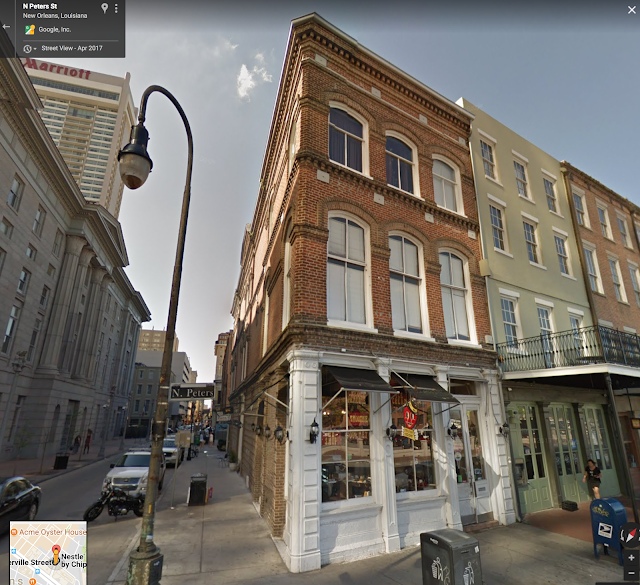 A bit around the corner shows you this Google 199 N Peters St New Orleans Street View, just click it.
We're walking towards the Mississippi River... 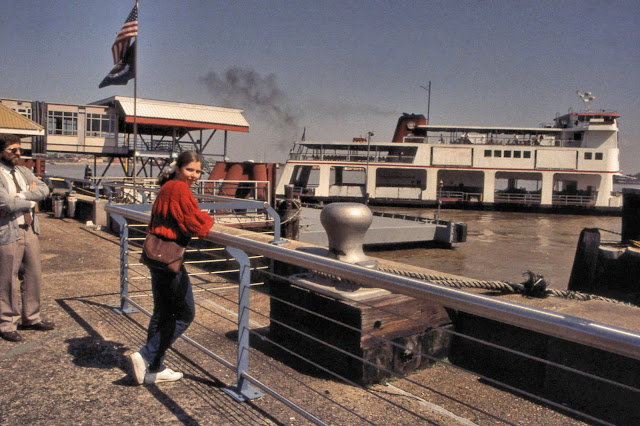 Near the cruise terminal at the mighty Mississippi river...
The Chilean gent to the left of me.
That day I had a perfect Spanish speaking adventure; good practice! 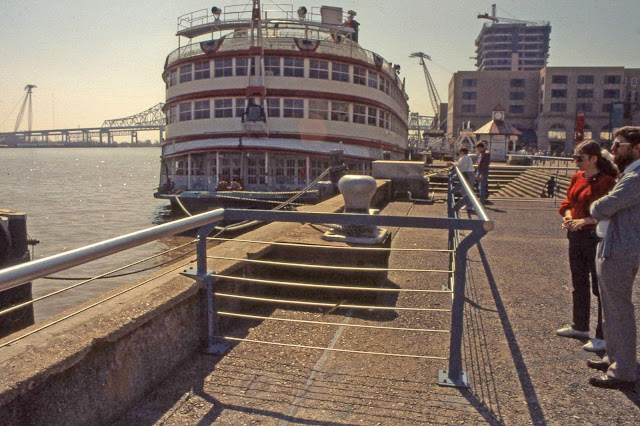 Pieter is now showing the other side, with the Mississippi river and the bridge in the back. 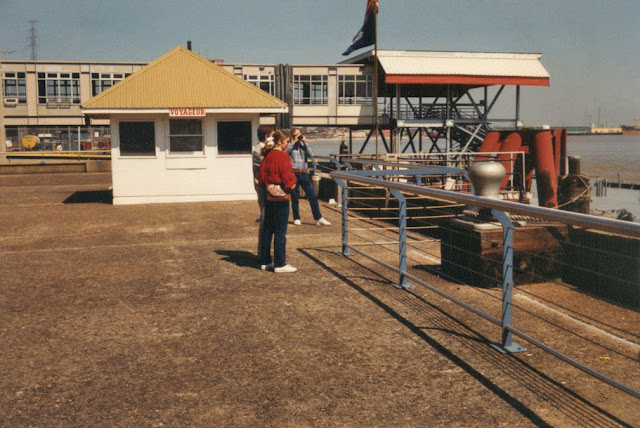 While Pieter took the above photo, Dutch business friend Anton van Overveld took this one with Pieter in it, to the right of me. 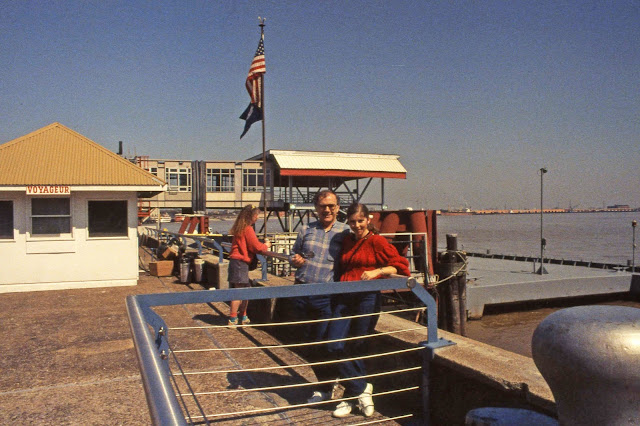 Happy together on the mighty Mississippi river...
Such a perfect sunny Sunday in March! 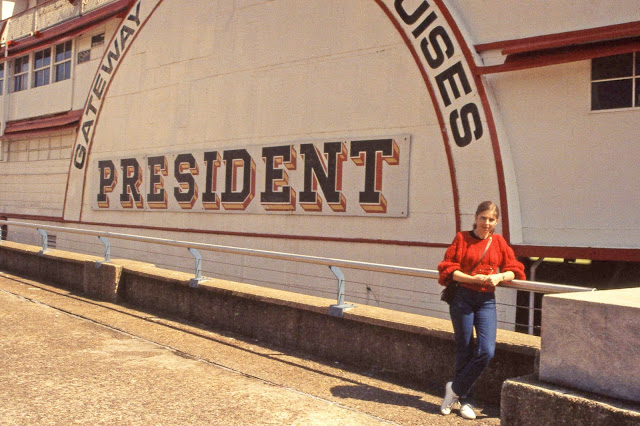 Dreaming of one day being able to make a cruise with such a boat...
On Monday, March 7, both of us had early breakfast with the conference participants and while Pieter did prepare for his lecture in the afternoon, I joined the Grand Tour bus at 10:00 AM and got to see beautiful New Orleans, together with Peter and Els Janssen, from my hometown area. 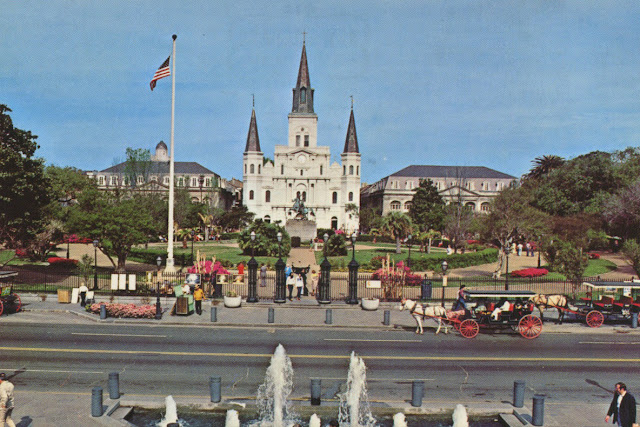 Card bought: Jackson Square with its famous General Andrew Jackson on his bronze horse statue set against the
beautiful Cathedral Basilica of Saint Louis King of France
This is the oldest Catholic cathedral in continual use in the United States.
Daily Mass is at 12:05 and I wish we could have had time for that.
By 12:30 we had all lunch at the Roosevelt hotel with all conference guests.
Also would love to visit the Old Ursuline Convent Museum... 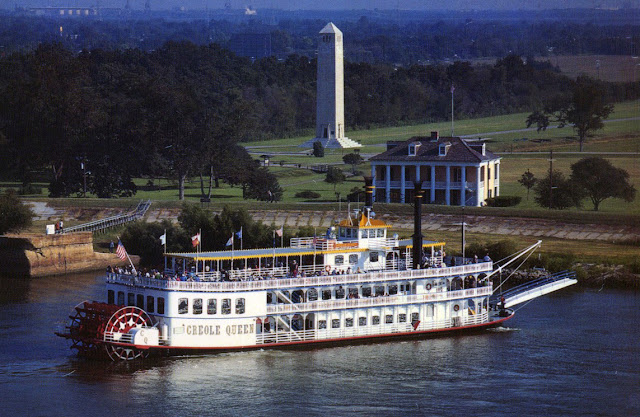 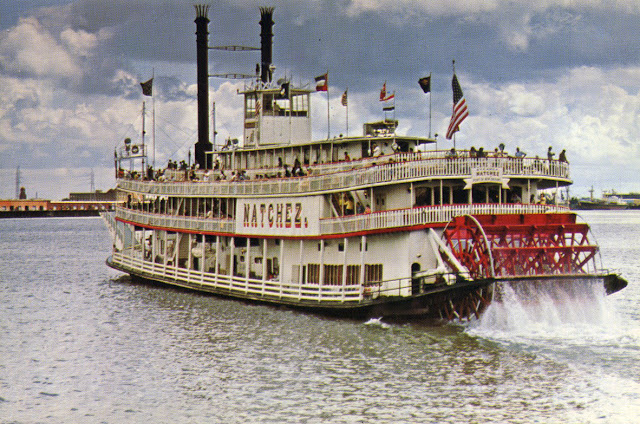 Card bought: Steamboat Natchez a Harbor Jazz Cruise would have been fun!
That afternoon, Pieter did present his lecture and I also was successful selling my own design, brass mushrooms for window decorations, see link below post: My Own Design of Brass Mushrooms.
On Tuesday, March 8, we did have the exhibition opening after a lunch buffet and in the evening Grand Ball with Dinner.
On Wednesday, March 9, after breakfast I went by bus at 10:00 AM to the New Orleans Cooking School where we learned to make Gumbo and Jambalaya and ate that for lunch... 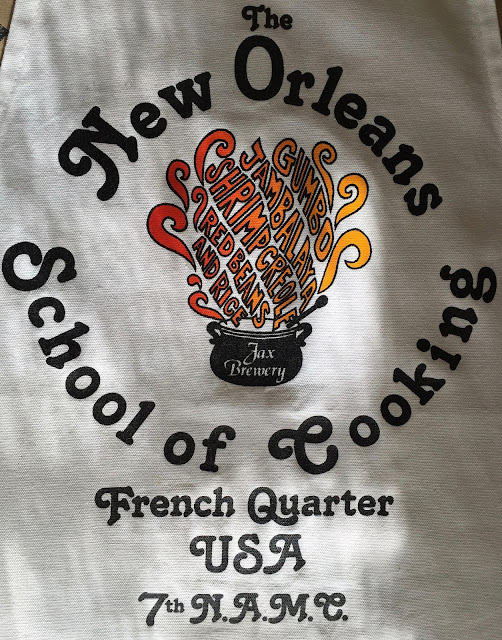 Still have this great apron that was included for wearing while preparing our food!
Just click on above link, you can have this HANDS-ON CLASS still today, ever since 1980.

Thanks for your visit!

{My Own Design of Brass Mushrooms} | my previous post by me