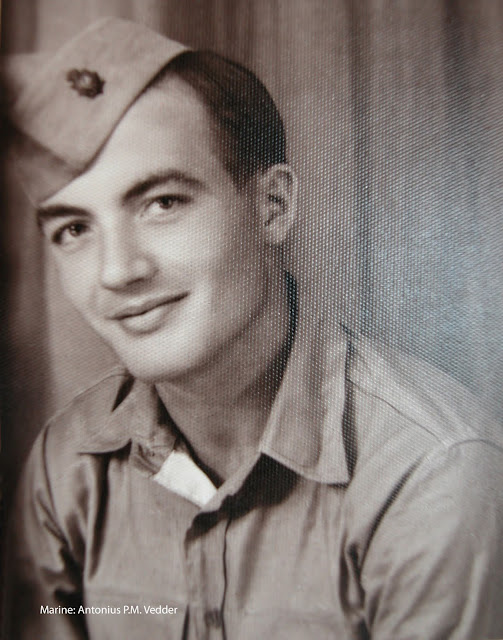 Marine Antonius (Toon) P.M. Vedder
The second son  had to go overseas in 1947 to Dutch Indonesia, for the Indonesian National Revolution. He'd joined the Marine on March 5, 1947 and after some special training they left for Indonesia.
On July 30, 1947 he left on the old 'Volendam', from Rotterdam, The Netherlands.

Once again: Grateful to NIMH The Netherlands for extracting its contents! See for more info link below from first post at bottom where I explain about donating these records to the Dutch Institute for Military History
Nederlands Instituut voor Militaire Historie 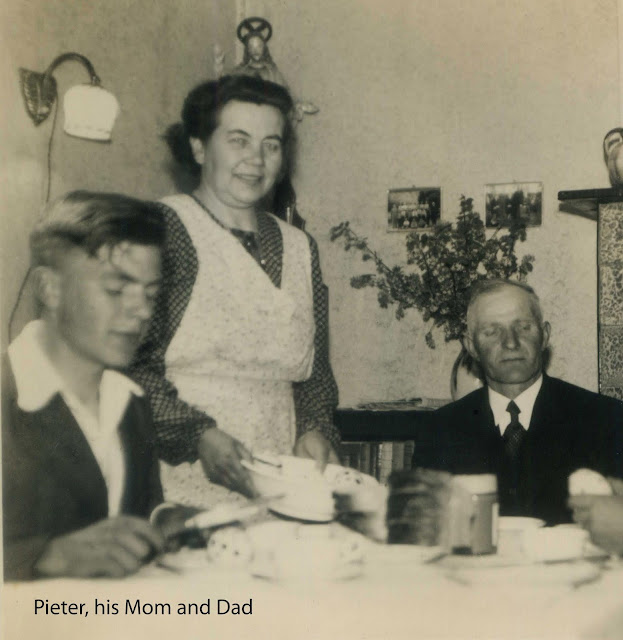 Pieter still being only child at home and this was with Easter, on March 28, 1948, a goose egg being boiled and  painted.
Pieter on the left, his Mom and his Dad. 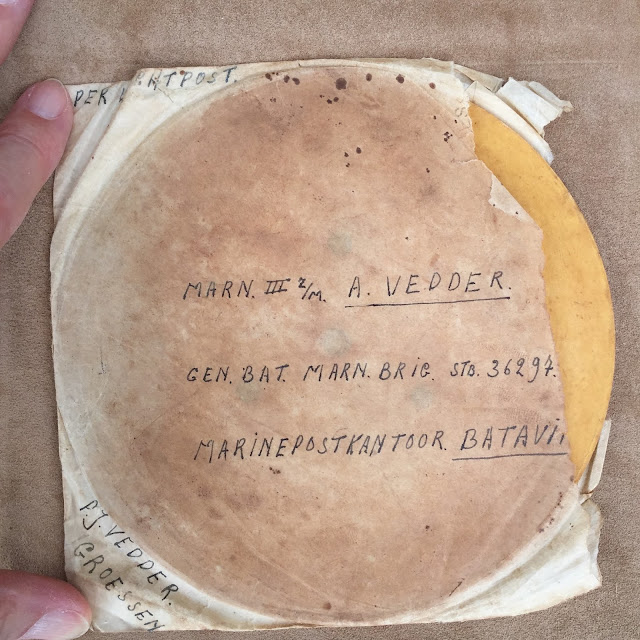 This is my hand, holding the thin paper envelope around this Gevaphone record mailed out to Marine Antonius Vedder... 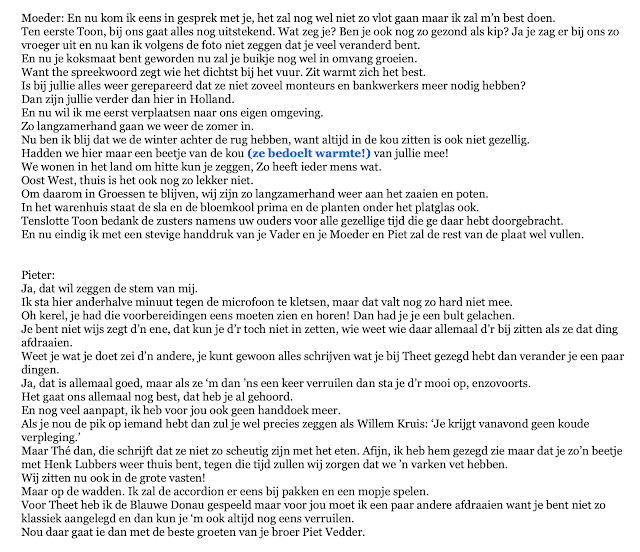 The Gevaphone record with spoken letter by Pieter's Mom and by Pieter himself, written down in Dutch.
Again it turned out to be 'speed-speech' for trying to say as much as possible in 1.5 minute!
Thanks to the help of Gillis Video we could hear it in slow motion for capturing the words! 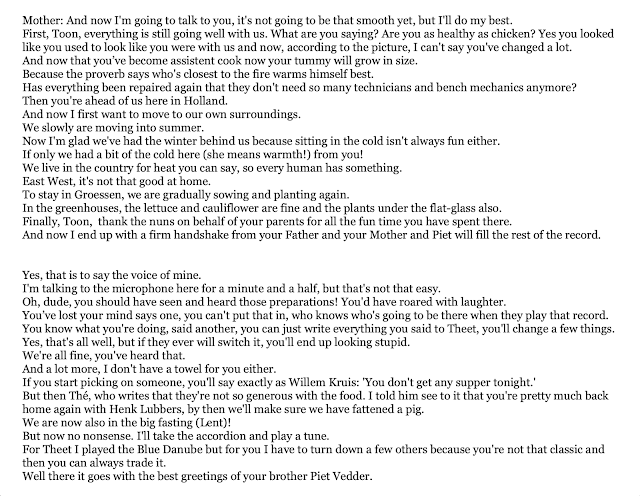 Translated into English above:
Mother: And now I'm going to talk to you, it's not going to be that smooth yet, but I'll do my best.
First, Toon, everything is still going well with us. What are you saying? Are you as healthy as chicken? Yes you looked like you used to look like you were with us and now, according to the picture, I can't say you've changed a lot.
And now that you’ve become assistent cook now your tummy will grow in size.
Because the proverb says who's closest to the fire warms himself best.
Has everything been repaired again that they don't need so many technicians and bench mechanics anymore?
Then you're ahead of us here in Holland.
And now I first want to move to our own surroundings.
We slowly are moving into summer.
Now I'm glad we've had the winter behind us because sitting in the cold isn't always fun either.
If only we had a bit of the cold here (she means warmth!) from you!
We live in the country for heat you can say, so every human has something.
East West, it's not that good at home.
To stay in Groessen, we are gradually sowing and planting again.
In the greenhouses, the lettuce and cauliflower are fine and the plants under the flat-glass also.
Finally, Toon,  thank the nuns on behalf of your parents for all the fun time you have spent there.
And now I end up with a firm handshake from your Father and your Mother and Piet will fill the rest of the record. 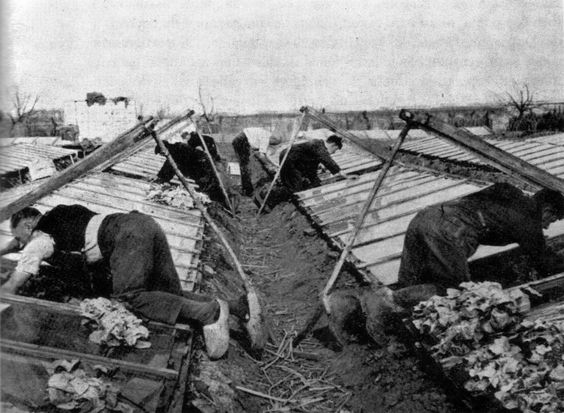 the plants under the flat glass... like in this photo showing flat glass gardeners click it
~
Yes, that is to say the voice of mine.
I'm talking to the microphone here for a minute and a half, but that's not that easy.
Oh, dude, you should have seen and heard those preparations! You'd have roared with laughter.
You’ve lost your mind says one, you can't put that in, who knows who's going to be there when they play that record.
You know what you're doing, said another, you can just write everything you said to Theet, you'll change a few things.
Yes, that's all well, but if they ever will switch it, you'll end up looking stupid.
We're all fine, you've heard that.
And a lot more, I don't have a towel for you either.
If you start picking on someone, you'll say exactly as Willem Kruis: 'You don't get any supper tonight.'
But then Thé, who writes that they're not so generous with the food. I told him see to it that you're pretty much back home again with Henk Lubbers, by then we'll make sure we have fattened a pig.
We are now also in the big fasting (Lent)!
But now no nonsense. I'll take the accordion and play a tune.
For Theet I played the Blue Danube but for you I have to turn down a few others because you're not that classic and then you can always trade it.
Well there it goes with the best greetings of your brother Piet Vedder. 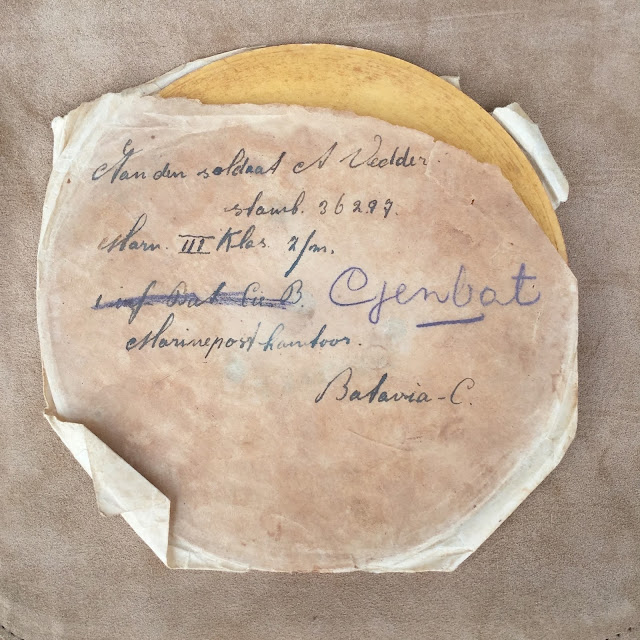 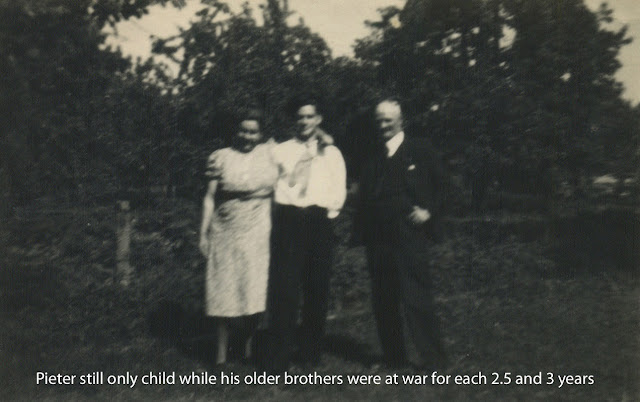 Pieter still only child, with his Mom to the left and Dad to the right, while his older brothers were at war for almost 2.5 and 3 years... 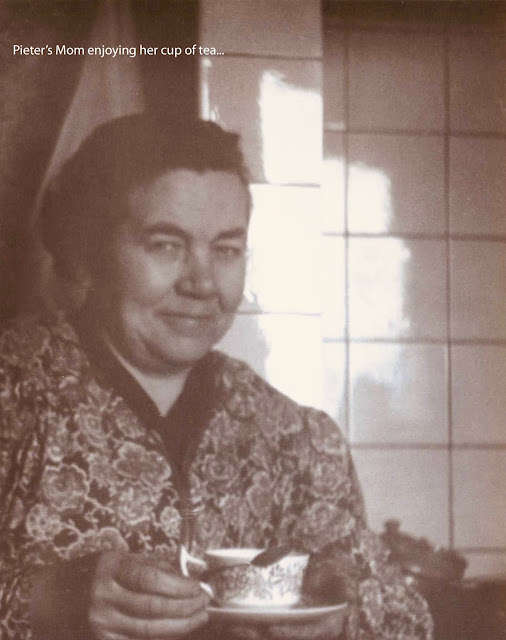 Pieter's Mom enjoying her cup of tea while reading one of her son's letters from Indonesia... 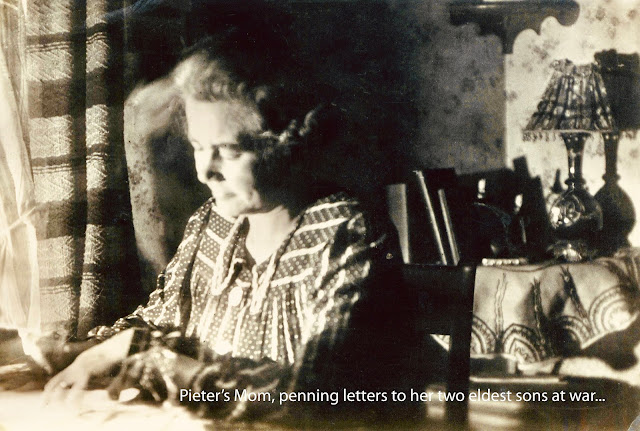 Pieter's Mom, penning letters to her two eldest sons at war...
Difficult times but they made it back home safe!

Listen to Pieter's Mom (side A) and Pieter talk (side B) to Toon... All merged together. 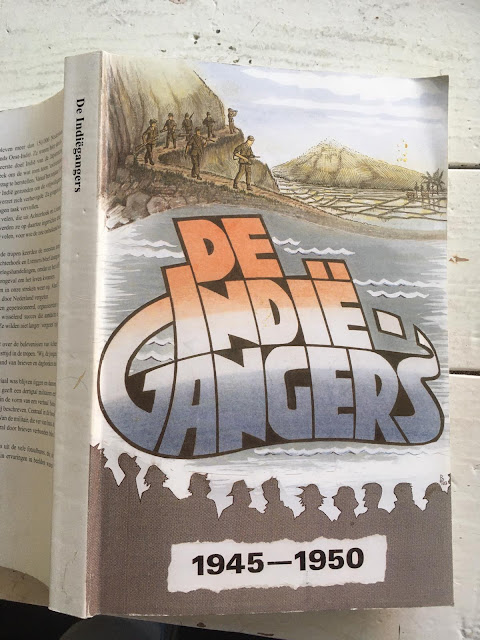 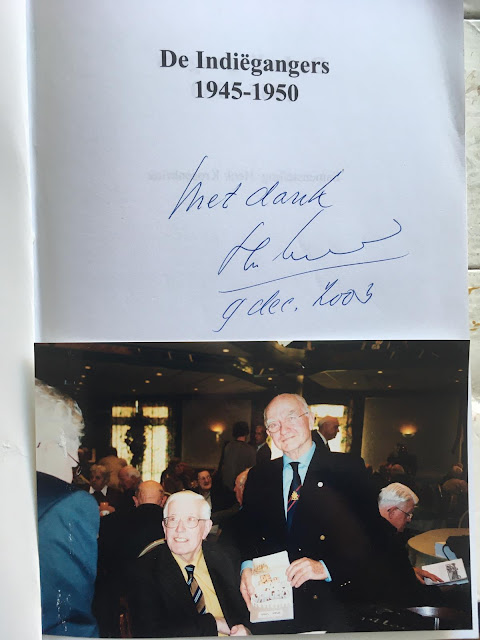 A book with compilation of stories by e.g. A.P.M. Vedder about his Marine period.
He proudly shows his received copy on December 9, 2003.
Pictures from his eldest daughter Myriam, Pieter's Goddaughter.
Toon died almost 3 years later but he leaves quite a legacy behind for his descendants...

Next post is about Pieter playing his accordion for his Marine Brother.