Soon I will be doing a post about our newly published book, but first I want to launch some of the Editorial Reviews for P.J.C. Vedder, as an author.
On Tuesday, August 20, 1968, upon the publication of the 3rd version of Pieter's Dutch book, journalist Jan Derks from newspaper Dagblad voor Noord-Limburg wrote: 'Fascinating visions behind Europe's best trade book'. 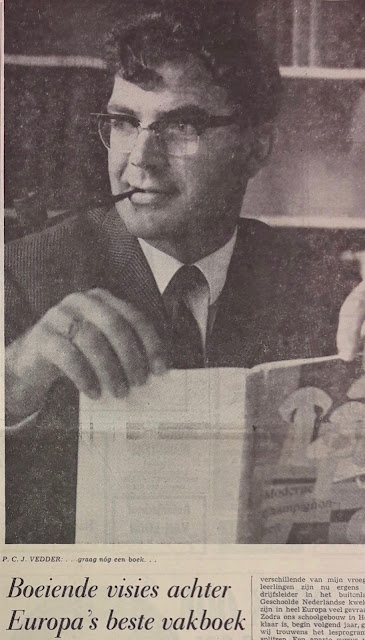 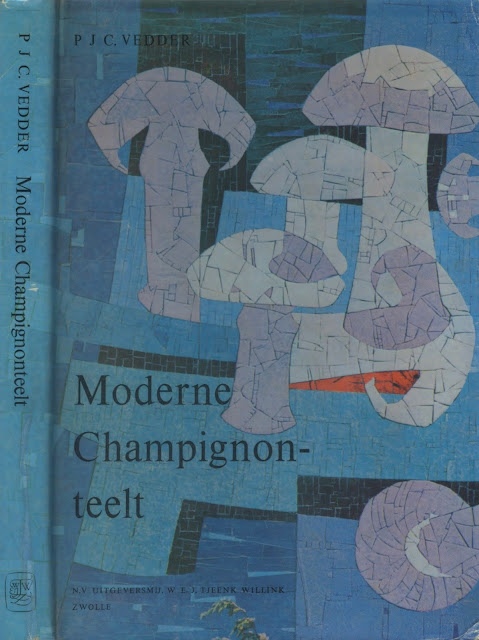 A trade book for the Mushroom Industry that is...
Moderne Champignonteelt or in English: Modern Mushroom Growing.
The jacket on this hardback depicts the mosaic artwork that was used on the wall, in the hallway of the Experimental Station for Mushroom Growing, where Pieter worked as a Teacher.
Earlier I've explained that for this 1st and only Training Centre in the World, there were no study books yet. So Pieter wrote them. He also wrote several Design Curriculum books for Agricultural schools and a simpler version about Mushrooms at School, for primary schools.
Thus building up quite a knowledge base.

Tuesday, August 20, 1968
P.J.C. Vedder, Author of Modern Mushroom Growing is ninety percent sure: 'Mushroom farm of the future will look like a hospital'.
Well, it certainly DOES! Both of us have been very strong in our training about creating awareness for hygiene as in this business so many diseases can be the result of 'being off'... We're dealing with bacteria and even a very detrimental virus disease.
The biggest chapter in our new book is about Pests and Diseases. 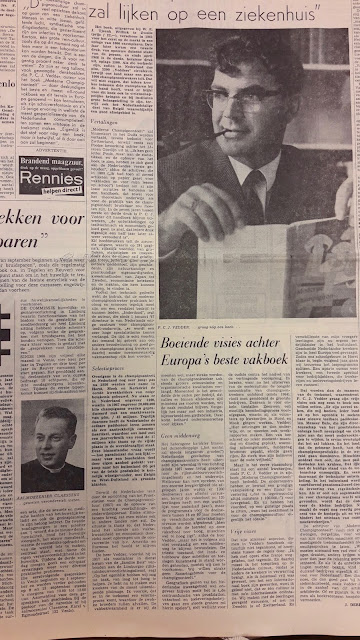 Quite an extensive article...

Pieter, at that time was smoking cigarettes and his pipe... a lot of stress and pressure, for setting up this successful Training Centre from scratch!
Writing useful articles for Mushroom Magazines, in German and Dutch and for his books, all original content.
There were few that had covered the subject from A to Z.
Sinden on Mushrooms, was a book compiled from several papers on the subject and also Pieter's boss P.J. Bels had started a handbook on which Pieter built further, in a more comprehensible way with his own photographs added.
Writing any scientific book has to be ACCURATE!
Pieter had the rare ability to explain in a very practical way to his students why certain procedures were so important and above all, how not to proceed.
This was the beginning, in Dutch and German language still, but other countries also got his book, still learning from it.
It of course prompted him to publish in several more languages!


Related links:
1978 - P.J.C. Vedder's Modern Mushroom Growing Book Published in English | previous post by me
1982 Sinden Award for Pieter at The Hotel Majestic, Harrogate, England | about the most prestigious award in the Mushroom Industry