Working Alongside a Retired Portuguese Style Bull Fighter... in Mexico

Yep, this was one of my colleagues while working together with Pieter for the first time in Mexico. 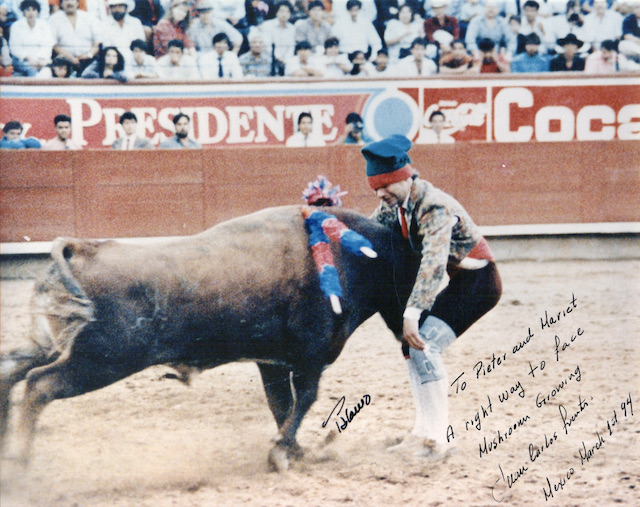 Juan Carlos Fuentes, whom we mentioned in previous post (see below) writing a message to us after working two weeks alongside me...
To Pieter and Mariet
A right way to face Mushroom Growing
Mexico March 1st 1994
Juan Carlos was recognized as being the person who introduced Portuguese bullfighting in Mexico, where the bull is not finished - but fought fairly with bare hands.
What crazy people actually to be taken on the horns...
Juan Carlos started doing this already at age 14 and all five of his brothers did so, as did his Father and his Grandfather! 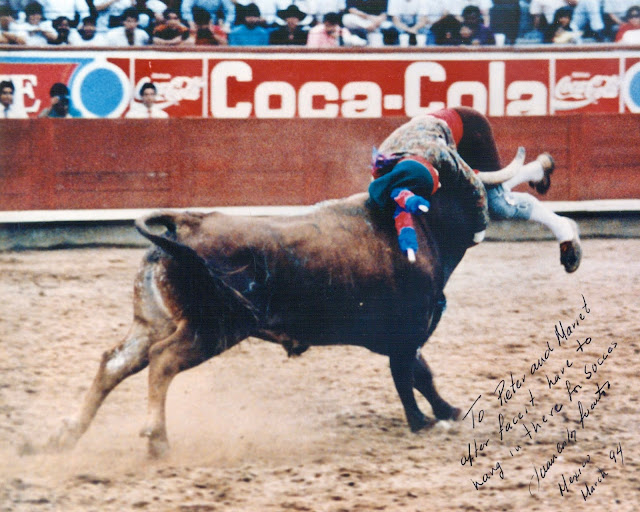 To Pieter and Mariet
After facing it you have to hang in there for success.
Juan Carlos Fuentes
Mexico March 1994
~
Juan Carlos had broken his ribs, his arm and his nose many times in the 12 years that he fought, plus ruptured lips and such.
And someone like that ends up in mushroom cultivation...
I don't think he's going to give up so soon; one like him can take a beating!
But a very nice guy to work with.
We also had him at Pieter's seminar in Pennsylvania on January 19th and 20th, so we already knew each other.
Related post:
Yep, both of us have been TRUE DARE DEVILS! | previous post where we met with Juan Carlos Fuentes
Posted by Mariette VandenMunckhof-Vedder at 8:00 PM