SOME VIRUS FACTS AND QUESTIONS

Already on September 19 of 2020, husband Pieter did write this and send it to our local Laurens Now Magazine. 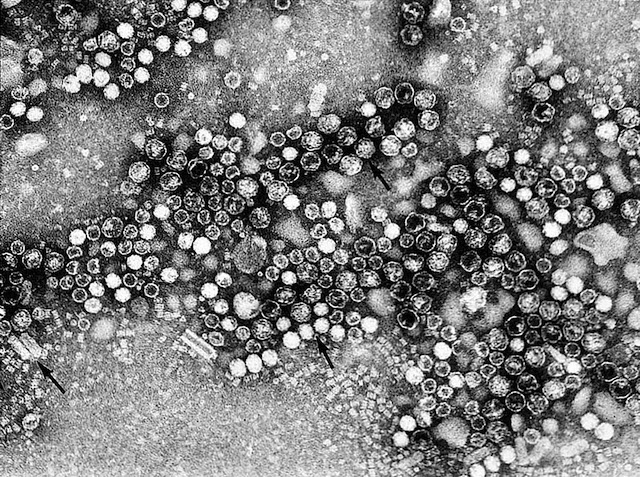 Figure 1. (from page 419 in our book) Three different types of virus particles (see arrows) have been found in mushrooms, suffering from dieback (see arrows). This picture was taken by electron microscope, enlargement 80,000 x.
Photograph, TFDL—IPO, (Task Dataflow Language at the Institute for Phytopathological Research WUR, Wageningen University, The Netherlands).
~
SOME VIRUS FACTS AND QUESTIONS
Together with my wife Mariette, I have spent almost my entire life in the mushroom world. We both have gained a very specialized knowledge and experience in that field, and because of that, we have done consulting work, training sessions and lecturing all over the globe.
We just have published our latest edition of the book 'modern mushroom growing 2020 harvesting', in which we have written down that scientific and practical knowledge, gained in our lifetime, on 448 pages, including over 200 color images.
To become an expert in the mushroom business, one has to study of course, what is going on in that special world of moulds, mushrooms and all kind of microorganisms, including viruses. You have to know that one of the most disastrous diseases in mushroom production is caused by a virus infection. Because of that, we know a little bit more about a virus than the average person. The COVID-19 virus is of course not the same as the virus causing the problem in the mushroom business, but there are enough identical characteristics, worthwhile for keeping in mind.
To avoid a virus problem on a mushroom farm, first we have to follow a very strict hygiene program; almost at a hospital level.
Secondly, we have to filter all incoming air for the growing rooms. Most modern mushroom farms have a sophisticated air handling system, controlling temperature, relative humidity, CO₂ concentration etc., including air filtration. By filtering the incoming air, we try to keep harmful organisms, like little insects, spores from competitor moulds and virus particles out of the growing rooms. And here comes the point. It is relatively easy to catch flies, butterflies, midges etc.; for that we are using a so–called pre–filter, more or less like a normal fly screen. Catching spores from competitor moulds and virus particles, however, is another story, because of the small size of those organisms. Such a filter, we call that an 'absolute' filter, has to catch particles, the size of three to five micron, with an airspeed through the filter of approximately 4 to 6 feet per second. The problem here is, that the virus particles are so minuscule, only 0.003 till 0.05 micron. 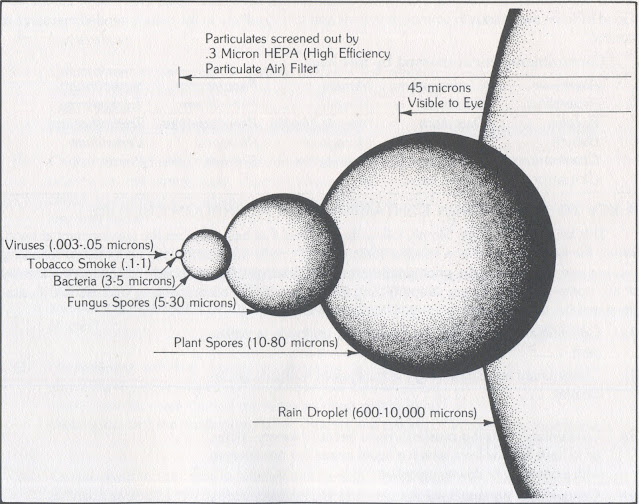 Figure 2. This figure gives a good insight in the size of virus particles, in comparison with other airborne particles, (Source Paul Stamets).
~
In the image you can see that the average virus particles are even smaller than substances in tobacco smoke, and also much smaller than bacteria and spores from moulds and mushrooms.
Therefore, a filter able to catch virus particles in the air would have to be so dense that hardly any air could pass under normal pressure and air speed.
But here comes some relief. A virus does not possess an independent metabolism; it can only 'grow' and multiply the metabolism of more developed cells. It cannot live that long on its own; it has to be attached to other living cells like bacteria, spores or even small droplets of human saliva. That's why we are advised to cover our face with a piece of fabric.
From the foregoing, you can figure out, that such a piece of fabric cannot catch virus particles; it can only catch particles attached to a bigger sized object, like bacteria, spores or a little droplet of moisture, coming out of your, or other person's mouth. Hopefully that piece of fabric fits tightly, so there are no 'leaks'. Some even are using a plastic shield. Does such a shield give you any protection; being open at several sides?
Another problem I see, is that if the mouth cover indeed has caught some virus, attached to whatever, what are you doing with that cover, coming back from e.g., shopping, putting it down somewhere and wearing it again?
Once a virus has invaded a host, it starts changing their metabolism in such a way that it multiplies the virus, instead of their own cells. As soon as a virus enters the host, a healthy host, immediately starts fighting off the intruder. By doing so, building an even stronger immune system. That is the reason that a little blood from a person who has overcome a virus attack, can help somebody, who is struggling, to fight the disease. Two things are important here; first, we are mentioning a 'healthy' host, with therefore a strong immune system.
Secondly, very important is the level of infection. A little infection to a healthy person is not a problem because that gives the immune system the time to build up the resistance. The problem is a high infection pressure upon an 'older' somewhat unhealthy individual, with a weak immune system. That gives the virus the opportunity to multiply, and so creating the problems, especially attacking the respiratory system.
Over the years, we have learned that a strong antagonism is often the key to fight off an invader; think e.g. about the penicillium mould, fighting infections 'extract penicillium'.
I don't come up with conclusions; after reading these facts it is up to you, using common sense.
Because of politics there is already enough confusing information around.
We always have made our decisions, based on facts and by using common sense.
Pieter J. C. Vedder
September 19, 2020 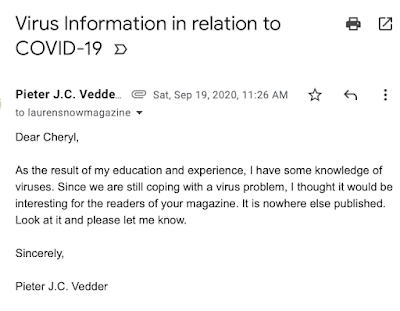 Pieter mailed the file out on Saturday, September 19, 2020 but it never got published in Laurens Now Magazine...
Reading now Robert F. Kennedy Jr.'s book, which we purchased on November 24, 2021 we decided to as yet publish the above.
The Real Anthony Fauci:←click link 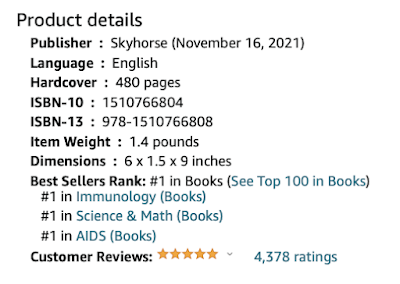 On February 16, it also is available in Germany and in our opinion in a better print (on 900 pages instead of 480!) for easier reading.
Das wahre Gesicht des Dr. Fauci←click link 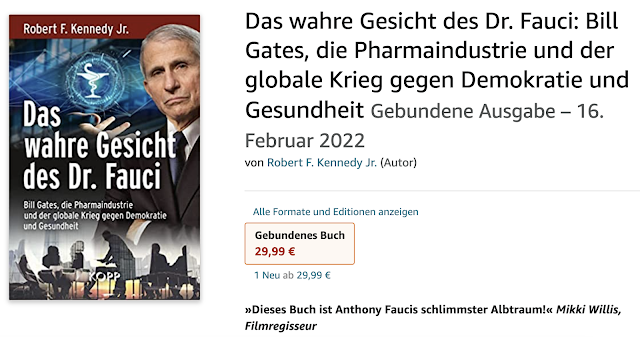 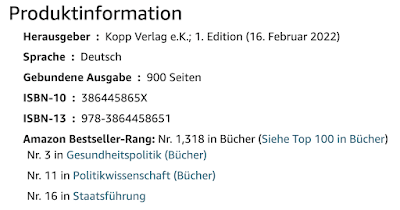 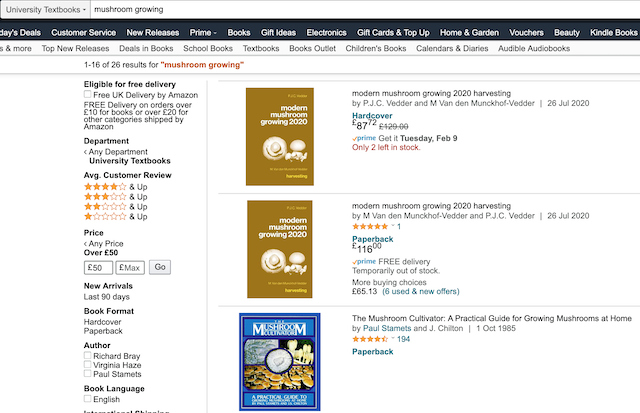 Our book is of course not a bestseller ranking #1 but together with Paul Stamets (Figure 2, used here above) whom we mentioned in our book, we are listed under University Textbooks.
Both of us have no PAY MASTER, but we publish the truth, not anything unfounded in science.
Related link:
modern mushroom growing 2020 harvesting | previous post by me about our publication
Posted by Mariette VandenMunckhof-Vedder at 8:00 PM