For a business trip to The Netherlands, with several of Pieter's colleagues from Campbell Soup, I also took care of the wife of his colleague.
We all went to the Dutch Mushroom Days on the day before and sealed it off with a dinner at the famous Turfhoeve, in Sevenum, The Netherlands.
Pieter's American 'boss' could not end the day and thus we landed in bed by 2:35 AM!
Again, rising early after a few hours and I dropped Pieter off at the Experimental Station where the excursion started (his boss remained in bed...).
Then, I continued with Mom & Dad and Mary-Jo, the wife of his Campbell Soup colleague from the USA.
We were going to visit the Open Air Museum in Arnhem, The Netherlands on May 30 of 1986... 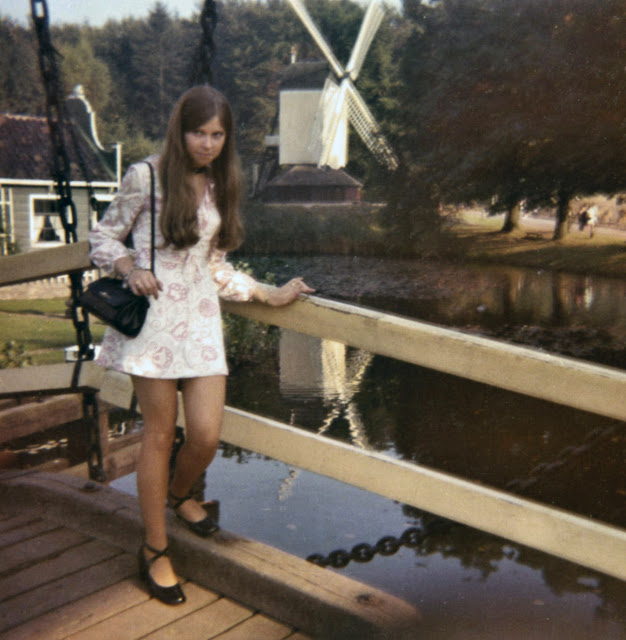 Well, I'd been here before and this photo shows me in October of 1971, when we went with all colleagues from the Practical Training College for Mushroom Growing together as a day's outing!
On one of the old bridges, with a windmill in the back.
Wearing my own sewing creation, dress made from a Burda pattern in a rayon fabric.
Standing on a Double Drawbridge, you will see later in more detail. 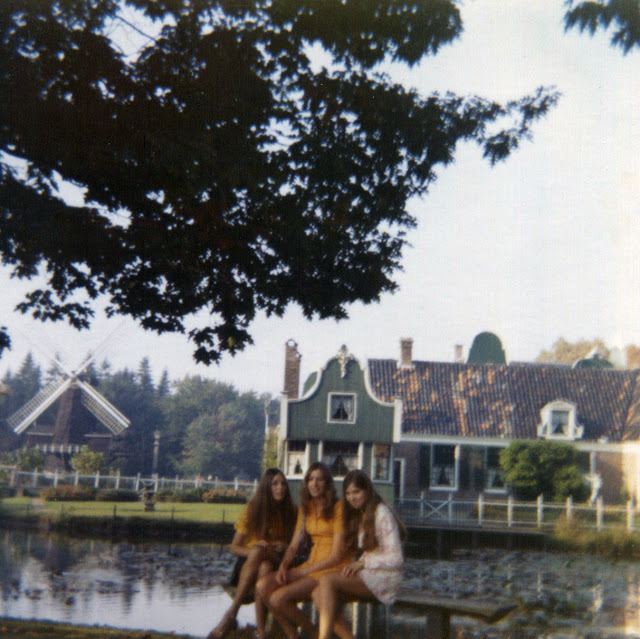 Two of my colleagues and me on the right...
Beautiful home and windmill from the Zaan region, North Holland in the back behind the canal. 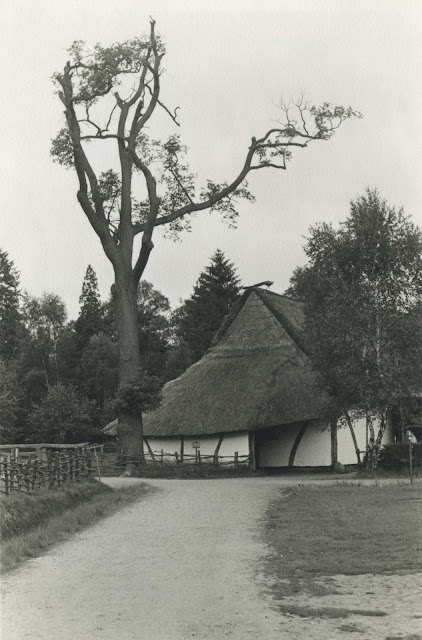 Husband Pieter made this photo for his photo club, before we immigrated.
Open Air Museum Arnhem had homes from centuries old from most Provinces. 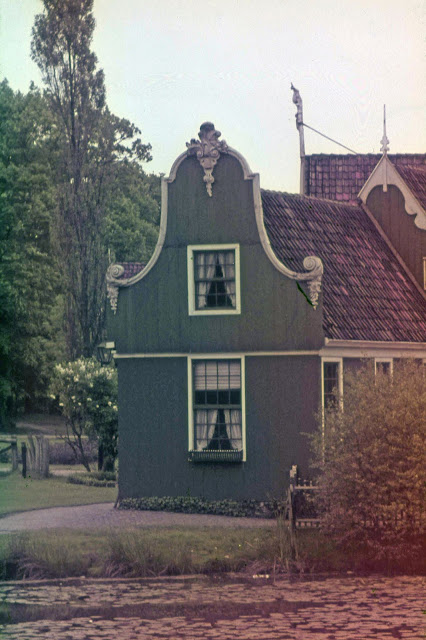 Some of the very special Dutch gavel homes from the Zaan region, North Holland... 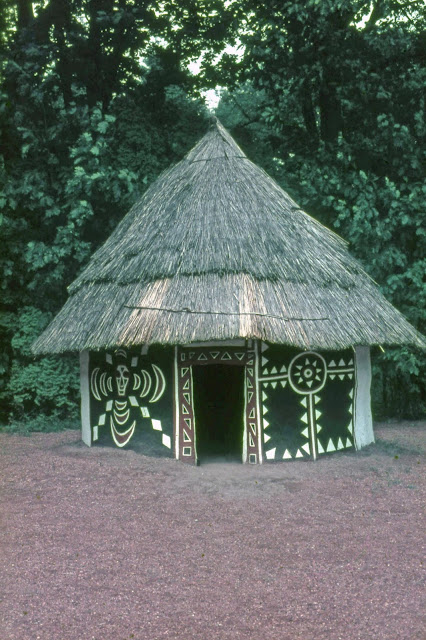 Don't really know what this is...
Probably Willy from De tante van Tjorven would know! 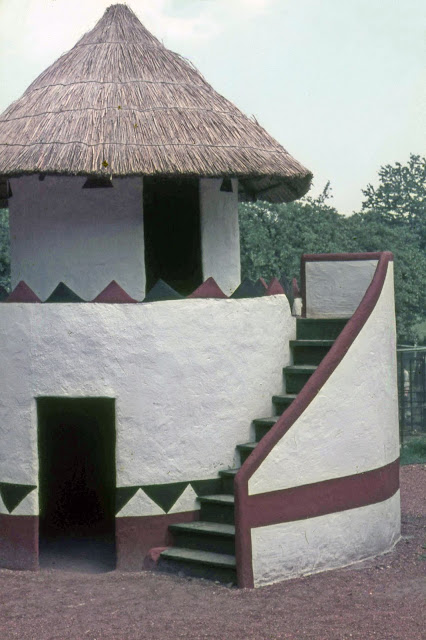 And this... It might have to do something with Suriname, Curaçao or other Dutch Caribbean Island or any of the former Indonesian colonial buildings. 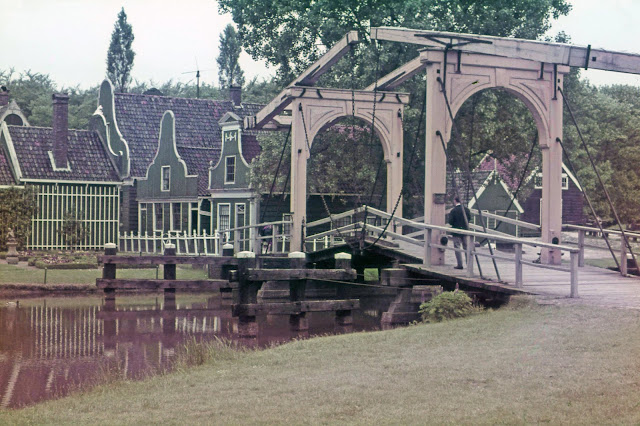 Typical Dutch Double Drawbridge from the Zaan region as we have so many over the canals... 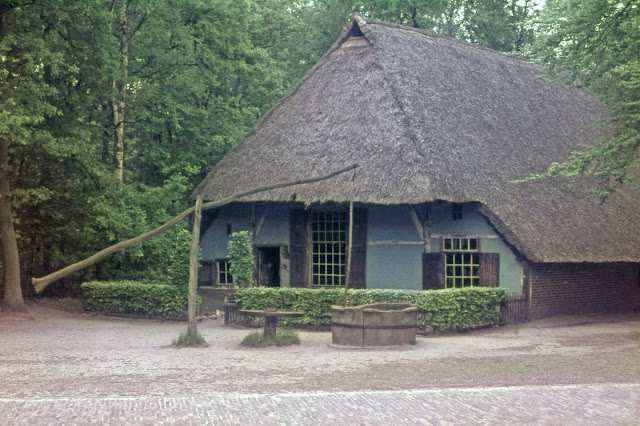 Thatched roof homes and a water well in front. 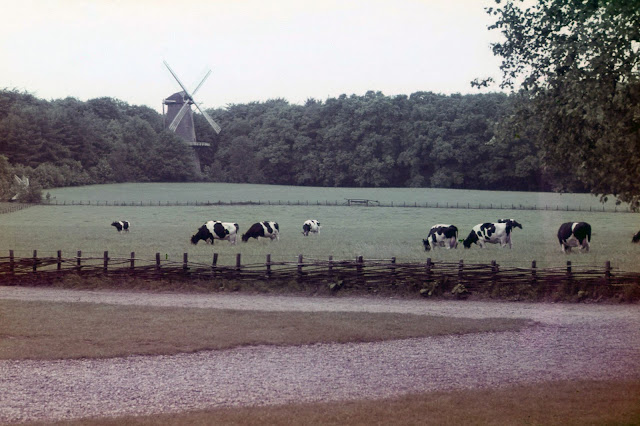 This Open Air Museum is so realistic, all the way! This is a typical Dutch landscape with its black and white cows. 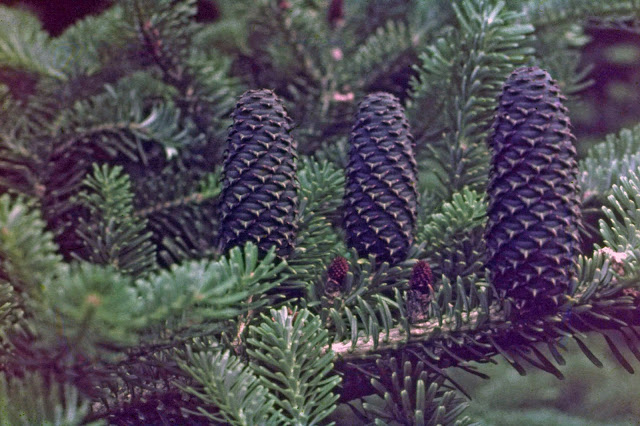 One could stroll around for hours... and probably for days! 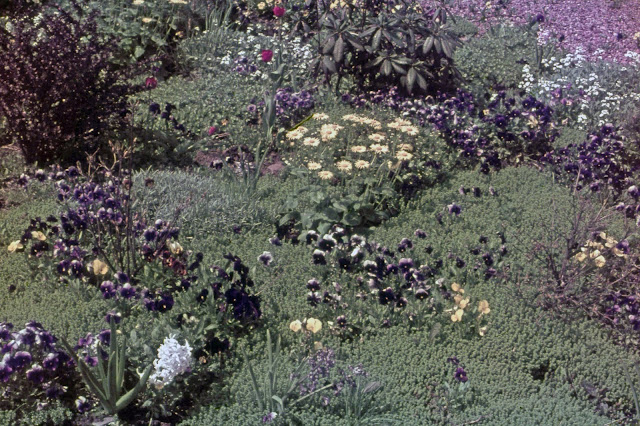 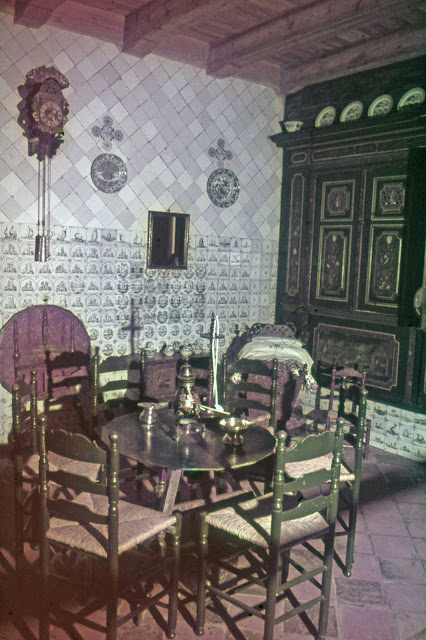 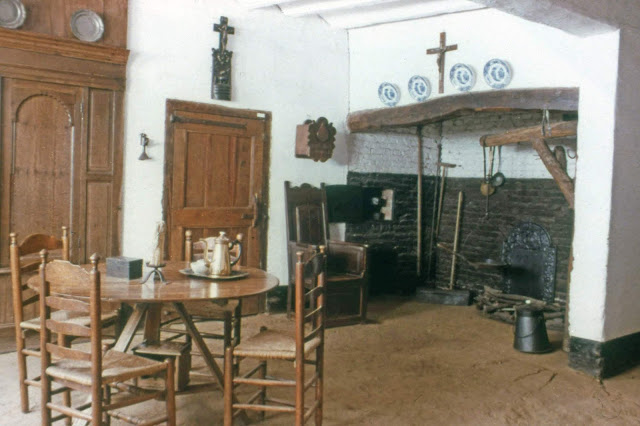 The following are from slides by G. J. Derksen who also published books about Open Air Museum Arnhem.
It is the Living Room Farmhouse from Budel, North Brabant. 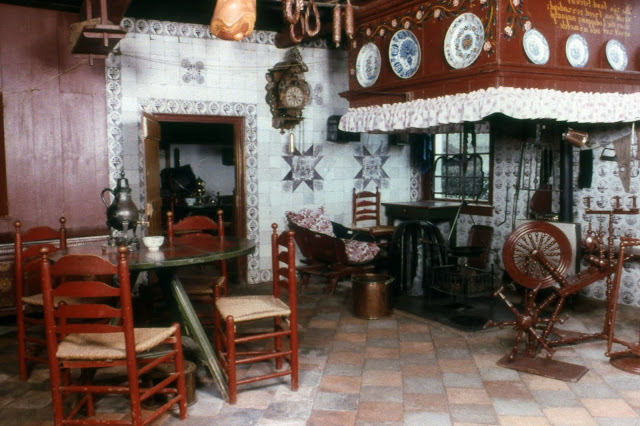 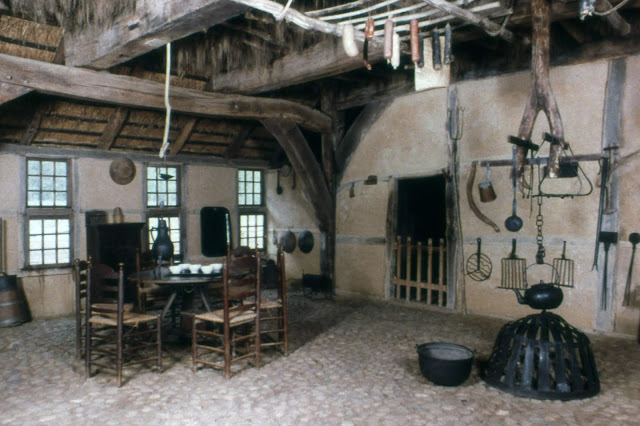 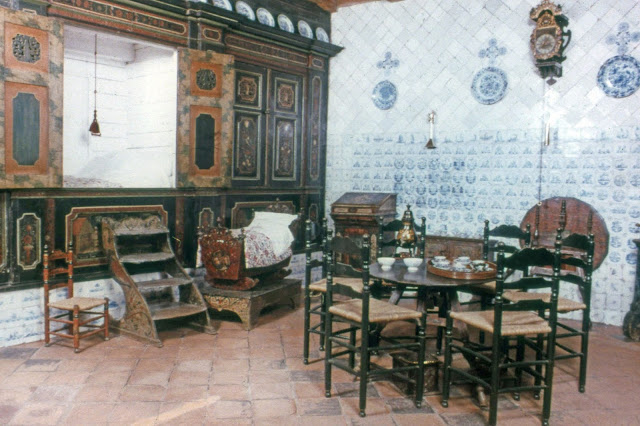 Parlor from Hindeloopen in Friesland
Notice the steps to the 'Bedstee' (cabinet bed)?
Also called Box-Bed or Closet-Bed (cupboard bed) and in French Lit-Clos... 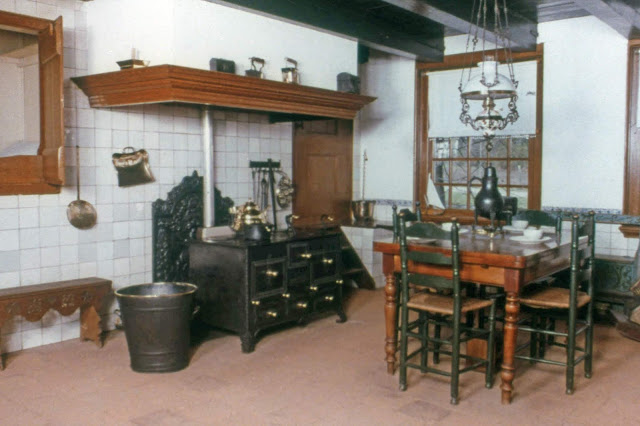 Kitchen Farmhouse from Midlum in Friesland 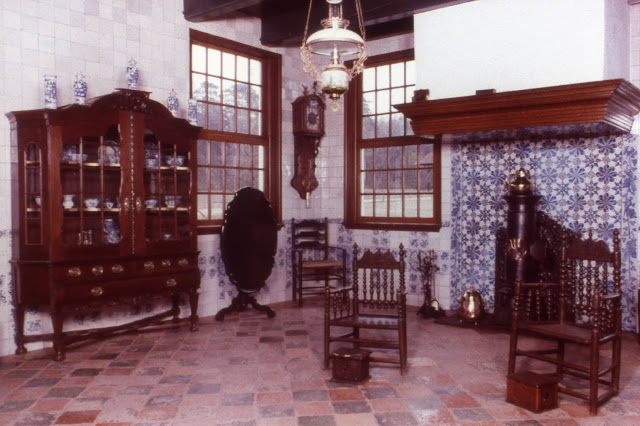 Parlor Farmhouse from Midlum in Friesland 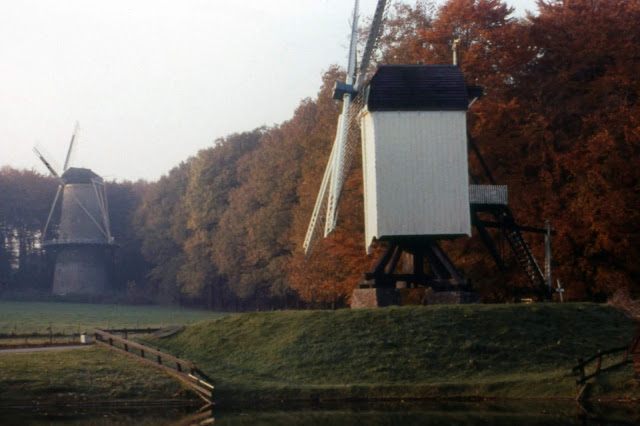 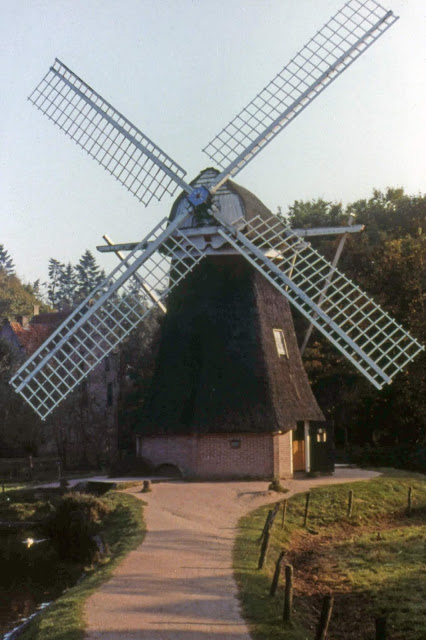 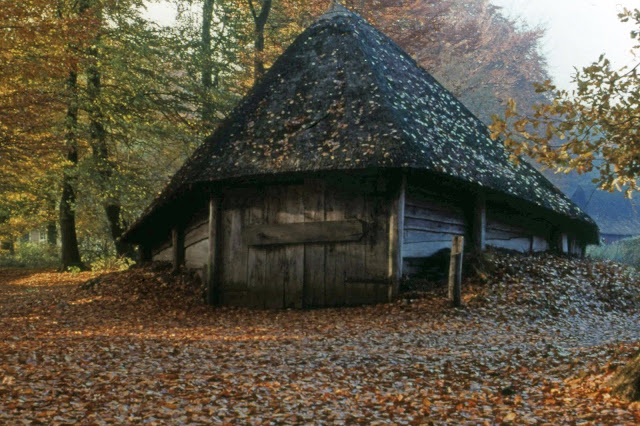 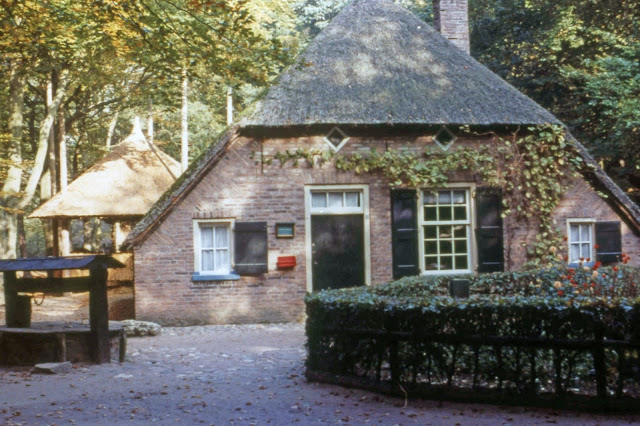 Veluwse Farmhouse from Vierhouten, Gelderland by F. van de Heetkamp
Husband Pieter is born in such a 17th Century home!
Sadly it got destroyed during WWII...
Above photo is also from the Province where Pieter is born! 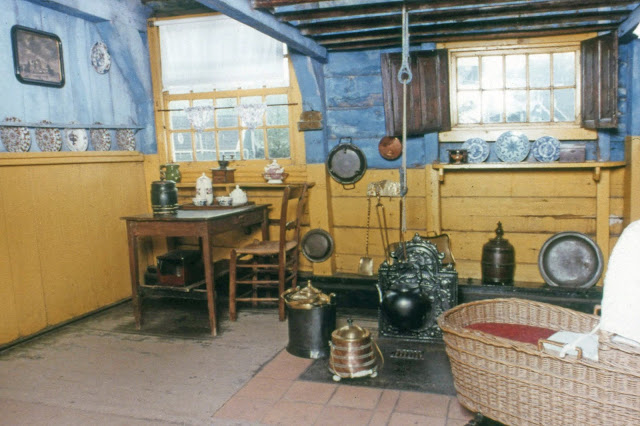 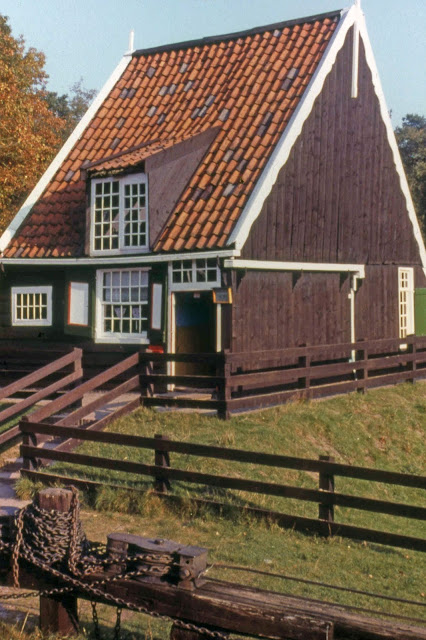 Fisherman's Cottage from Marken, North Holland by F. van de Heetkamp
With Mom & Dad and our American guest we drove back via a bakery in Wanssum for some typical Limburgse 'vlaai' a special pie.
Back home at Mom & Dad's place also Pieter joined us for a farewell coffee with pie...
Mom & Dad enjoyed the American lady and they had so much in common, same size family and same religion.
It was a special day for ALL!

Related link:
{My Teacher, Mentor, BOSS & Husband over 44+ Years} | previous post by me where you can see my 1st photo...
Posted by Mariette VandenMunckhof-Vedder at 8:00 PM