Thanks to Aviodrome in The Netherlands, I did obtain a photo from KLM's Boeing 747-300 as it still was in use over 1987 when Mom & Dad made their FIRST Flight EVER; together with us! 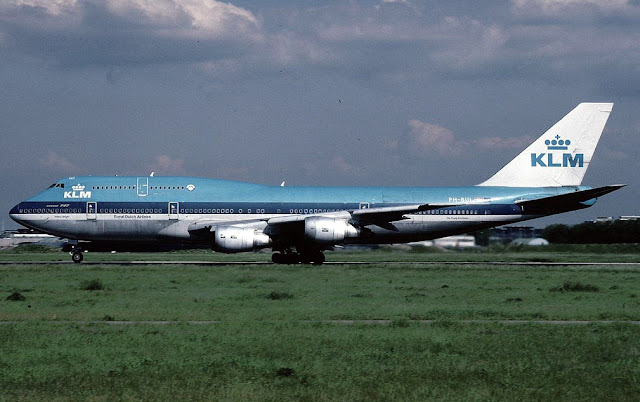 On April 20, 1987 we left together with husband Pieter, who had circled the globe, from Atlanta via Seattle to Tokyo, Beijing, Hong Kong, Taipei to Amsterdam for some business in Europe, following his People to People Citizen Ambassador Program; both for Campbell Soup.
During the three weeks that Pieter was in the Far East, I went to Europe.
So togethe we went back to Schiphol Airport in Pieter's rental car and relaxing in the Van Gogh Room (for Business class and Royal class only). 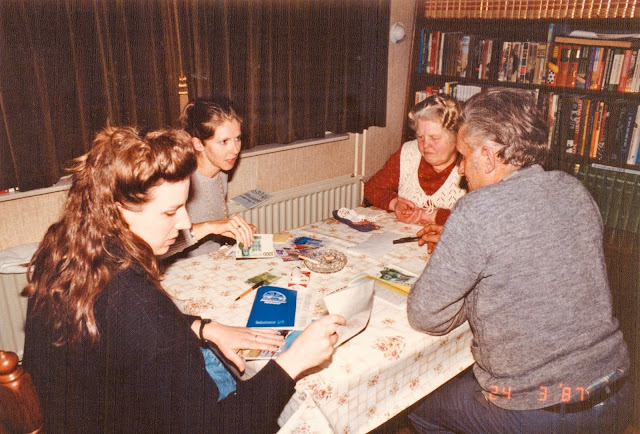 On March 24, while Pieter was in Beijing, China, I had gone to the bank for handing Mom & Dad 1,000 Dutch Guilders, approximately US $ 500.00 as part of the ticket price.
Sister-in-law Wilma, seen on the left, did take care of the tickets on KLM Royal Dutch Airlines.
Pieter would be back in Europe by April 10, on April 20 all four of us flew to Atlanta...
The next day while at home in Dublin, Georgia/USA, Mom & Dad were welcomed over the radio by 'Uncle' Bo Whaley during his talk show! 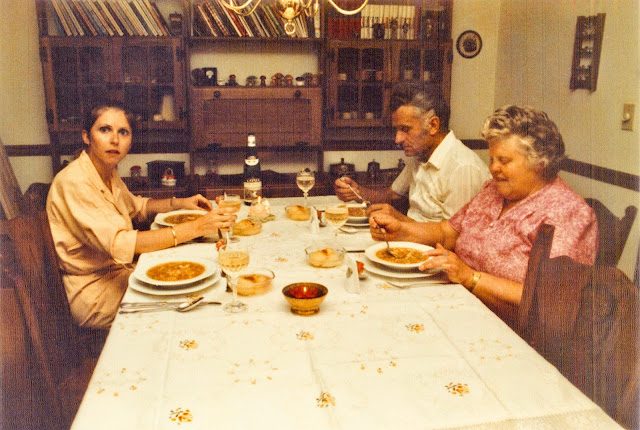 In previous posts you could read about some of our trips or just Mom & Dad with me, as Pieter had to work for Campbell Soup.
Above photo shows the final evening of Tuesday, May 12, that we sat together at table, with Pieter (who took this photo) before he had to travel to Dallas, Texas next day... 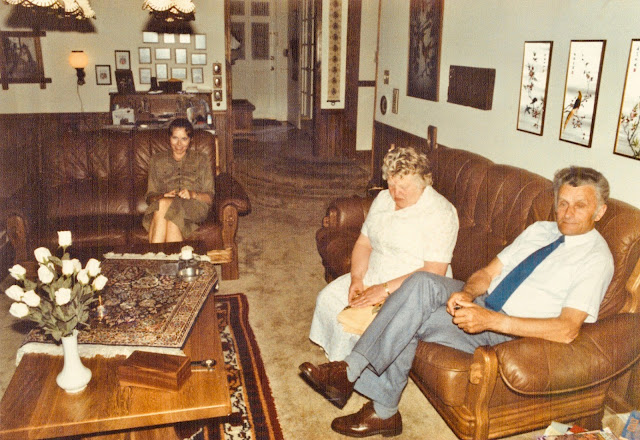 Our final Friday evening together at home... We just had gotten back from visiting some friends and Mom had received a nice hand painted cloth from India, to take back to The Netherlands. 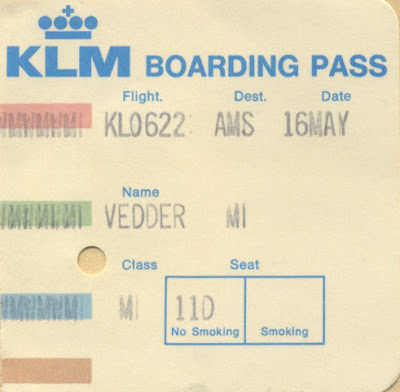 Business Class in the Boeing 747-300 was in the upper deck and also in the lower deck where the 3 of us were seated.

The only disadvantage was that I was in seat 11D, about 'half-a-row' behind their seats 11A+B, contrary to other seat rows in the center and on the right side in this Boeing.
But I happily accepted that, as it gave more leg room and seating space, complete with dinner served on china and so on.
It was a night flight so one ought to sleep as much as possible...
My brother Harry with his wife Elly did pick us up in Amsterdam and I had to do consulting work in Germany the next day...
Dad had insisted towards Pieter, that I'd use their car instead of renting me a car for the 2 weeks of work in the Bremen area, Germany.

On June 3, I did travel back home from Amsterdam, The Netherlands to Atlanta, USA with business friend Jan Thielen from Lottum, The Netherlands who gave me a ride to the airport.
In return for that ride, I could share the privilege of checking in at the business class counter and access to the business class 'Van Gogh' room with my KLM Courtesy Card. Just as we could with Mom & Dad in tow. You were allowed to bring a guest...

Those were the days of classy travel with lots of privileges!
So grateful for having been able to let Mom & Dad share in it.