Today, November 3, it is 120 years ago that my OPA, paternal GRANDDADDY was born. He also was my GODFATHER. When I picked up my childhood poetry album and read his words, it made me think of him on this special day. He passed away because of a fatal stroke when I was only 14 and he 73... He was a hard working man, a plasterer (stucadoor in Dutch) and doing also ornamental and decorative interior plasterwork around ceilings and lamps. Nowadays we buy it ready made out of resin... His two brothers were also plasterers and his Dad, my Great Grandfather, did whitewash or lime wash walls for a living. Tough job and it sure didn't make them wealthy. My great-grandfather only lived to be 52 years old. But they were honest and very much Church going people that raised their large families by maintaining high morals and ethics. They were happy and content, something that is often lacking nowadays especially amongst the younger generations. The youth often throws away the religious part that their ancestors lived by for centuries. It was a culture, handed down from father to son, mother to daughter. Now people think they can 'have it all' with minimal efforts and all on their own. Often life does not unfold like that as somewhere down the road, there will be a bump and what then? Facing it all alone, without any spiritual support and believe, will be hard. Okay, let's see what message Opa wrote for me way back... 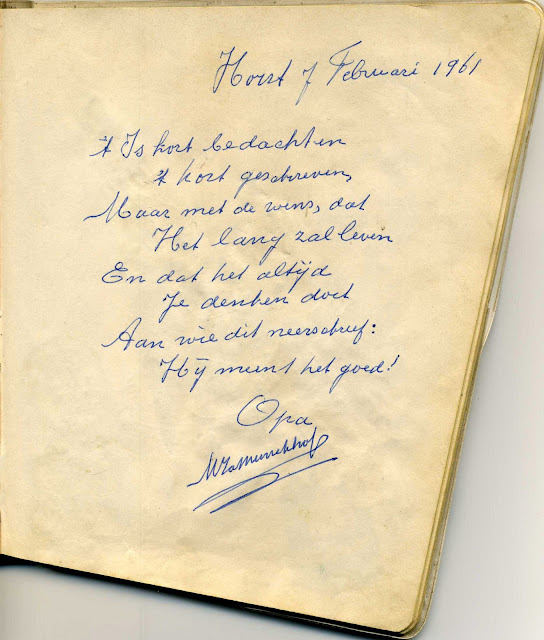 Just a short note
Not much in writing
But it's my wish,
That it may be long lived
And that it always
Reminds you
Of who wrote this:
He means so well!
Opa 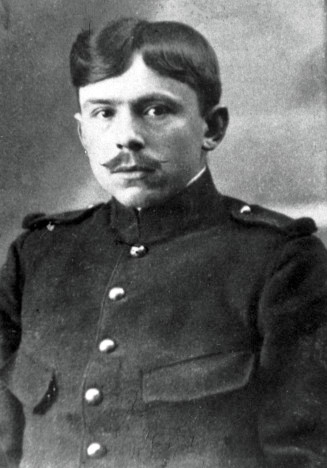 Opa as a young man, wearing his border guard suit. Still having his own dreams...
The Netherlands had no military during WWI as they remained neutral; hence they only had border guards.
We have no idea where my Opa Martin Van den Munckhof, born in Horst on November 3, 1891 did serve... Maybe in Venlo?
He lived a harsh life through WWI; the Depression years; WWII and yet he managed to raise his large family of 12 children. 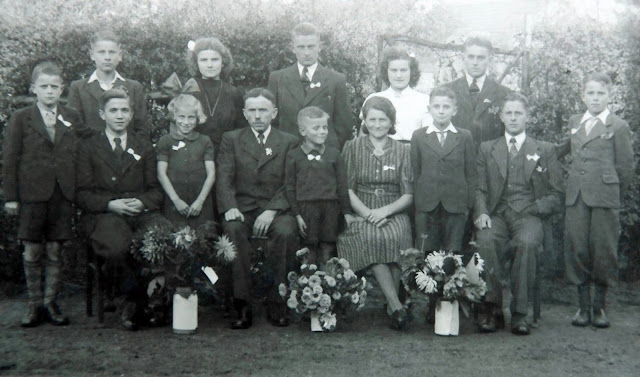 This is on their 25th Wedding Anniversary; 13 September 1943 during WWII...
My Dad is the one in the center, top.
Uncle Harry to the right is seen wearing his plus fours. 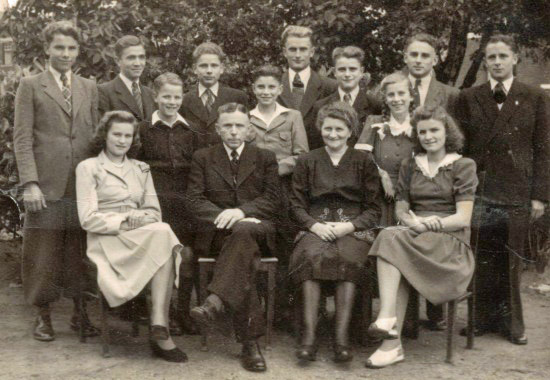 This was on their 40th Wedding Anniversary, 13 September 1958...
Dad is again in the center, top row.
Uncle Harry to the left, is again wearing his plus fours.
Sadly, Opa did not live till the 50th Wedding Anniversary as on February 15 of 1965, he passed away. On the birthday of his daughter, Aunt Nelly who's seated to the right.
Several of my uncles and one aunt, have followed their parents to heaven. My Grandmother passed away on November 26, 1984 at the age of 91. She was a long time friend of my husband Pieter's Mom! 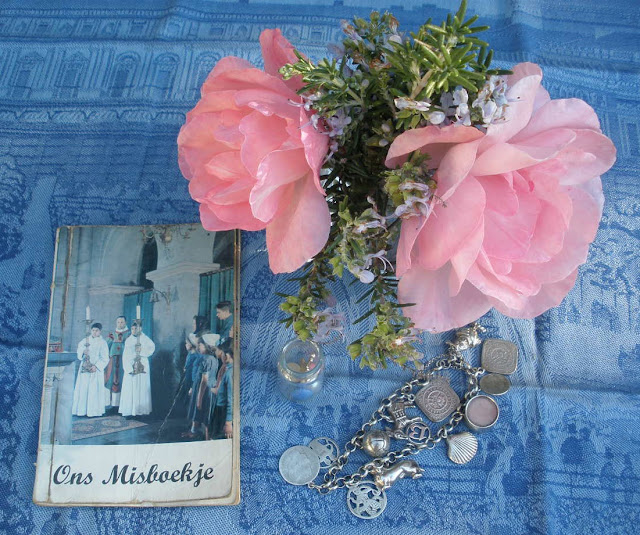 Some treasures I keep from my Opa...
In the little jar is a blue stone that was once set into a little ring that I received from Opa when I was 5.
I walked home from Kindergarden and Opa met me on the road as he walked with his cane daily for exercise. He gave me this little ring and I was over the moon. Of course we had no jewelry then, nothing on my fingers, wrists or in my ears. To me it was a precious piece of jewelry and when it came apart, I still kept this little blue stone...
To the left is my very first Mass book that I received from Opa for my 1st Communion.
Going to a Catholic school, we went to Mass daily and that was marked even above our grades on our quarterly 'rapport'.
The silver charm bracelet (without any charms) was given to me when I did my Confirmation in sixth grade.
That I've kept also forever, as it is so dear to me. Sentimental value from a person that loved me and whom I loved and very much admired. 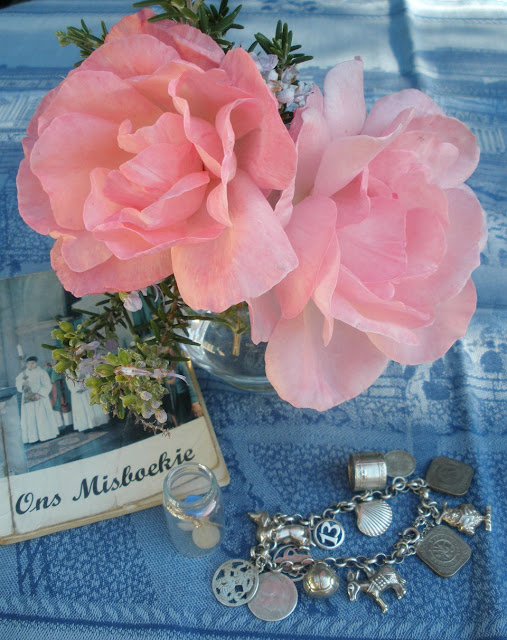 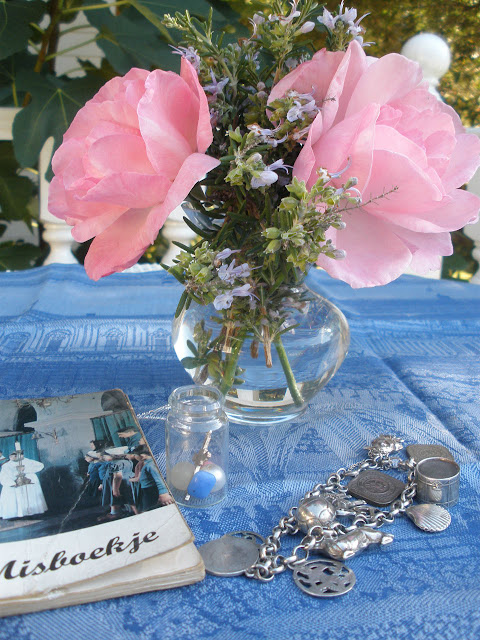 Opa went to Mass every day and he prayed for his entire family. He loved them and did visit regularly in order to keep up with everyone.
Sadly Opa never got to meet his three Australian grandchildren. When they'd boarded the ship in Adelaide, Opa had already died... sad for making the long journey over seas, to show the children to their grandparents and only one of them lived to actually see them. 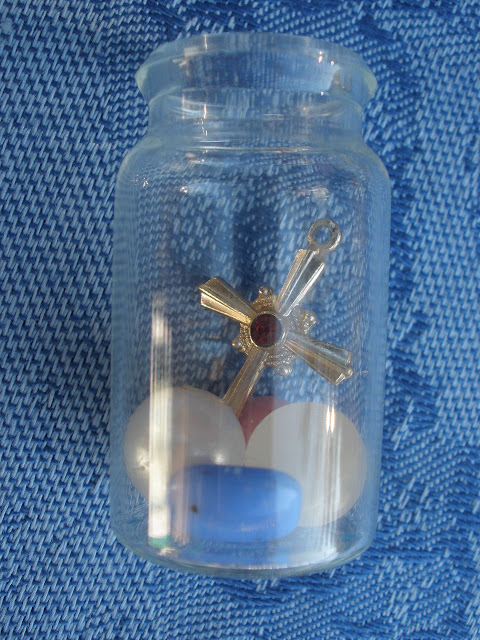 My little treasures... The blue stone from the ring that I got from Opa when I was only 5.
The cross is from my Great Uncle, Heeroom, who was advisor to several bishops and living in Indonesia. Will introduce him later... 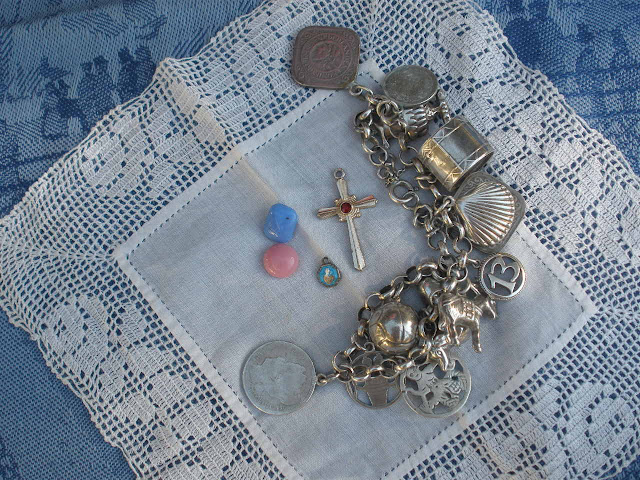 On this little 'Pochette' (pocket square), in crocheted rose filet lace, are some sentimental treasures.
Also the medallion with the Holy Mary is there, that got pinned onto my camisole as a child. Even babies had it on, for protection by the Heavenly Mother.
The blue stone has a little crack but that's fine...
By the way, the number 13, I bought in Germany and over there it is a lucky charm; Glückszahl. 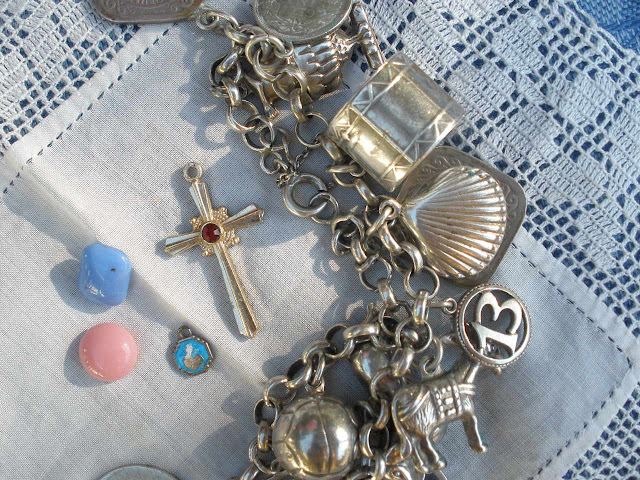 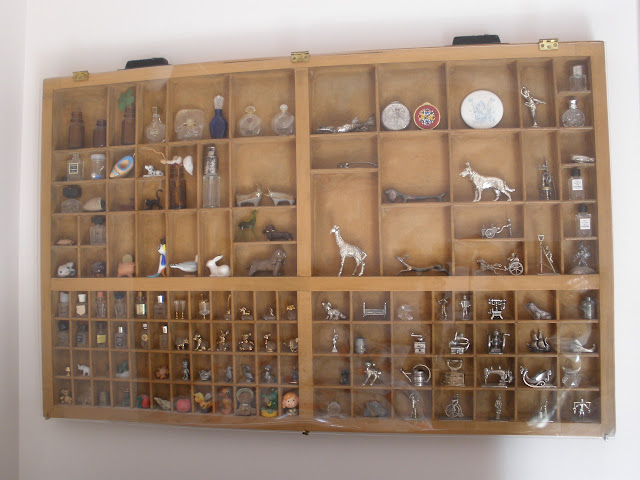 Okay, the treasures are back in the authentic antique letterpress drawer. Pieter did put an acrylic sheet in front to keep (most) of the dust out. The little jar with the blue stone resides to the left, near the top under the small brown glass jar. 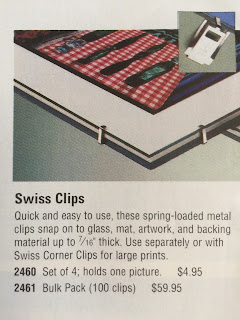 The acrylic sheet is kept in place with Swiss Clips, see top right corner how they look on the backside.
Easy to slide to the side for opening up... 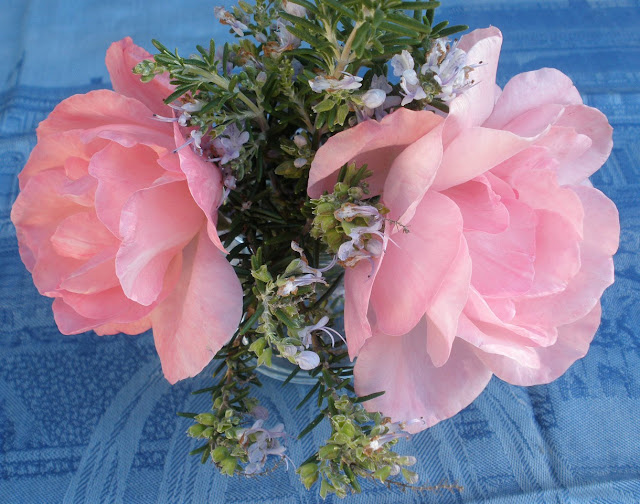 Did you notice my Oma roses? Yes, they are blooming now, after the heat of summer.
Remember on August 13, the Oma mystery rose got resolved by Bea from Modern Country Lady and we now know it is the Floribunda rose: Queen Elisabeth. 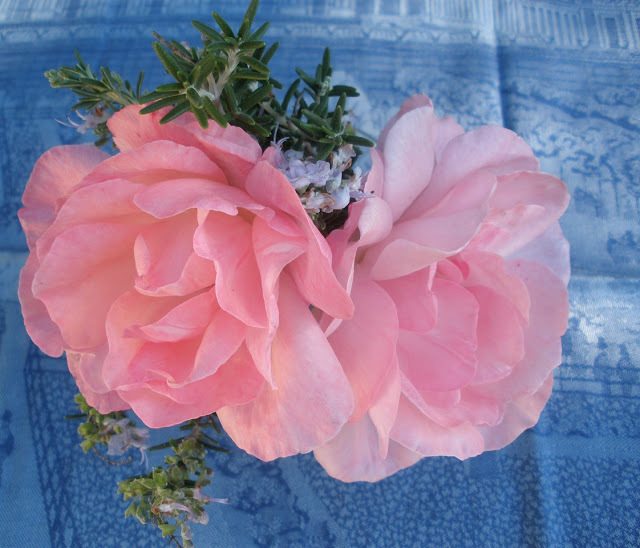 Paired with some ever-blooming Rosemary they look gorgeous in a small Baccarat crystal vase! 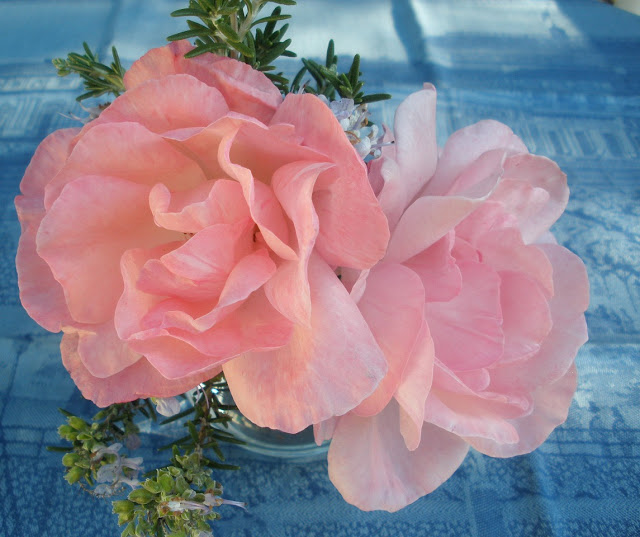 It was perfect for this post for having Oma's roses as well. They belong together... 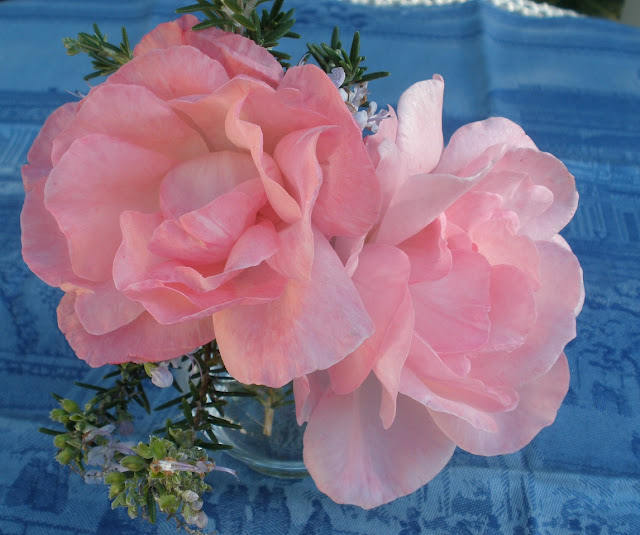 The blue Le Jacquard Français tea towel has served me well this week! 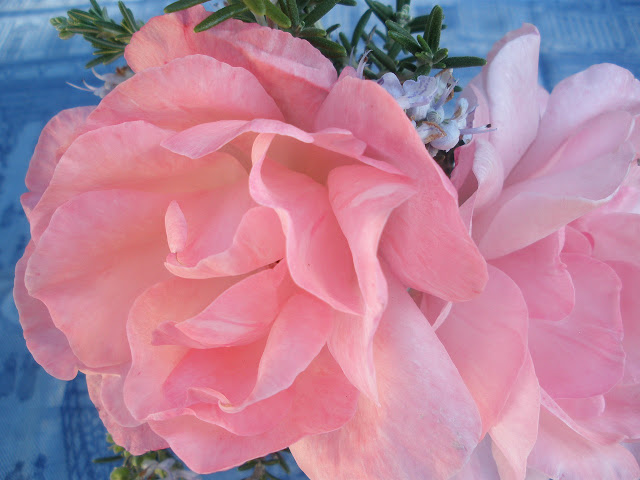 Guess that Opa and Oma are smiling down from heaven...

Posted by Mariette VandenMunckhof-Vedder at 10:04 PM