For 3 years and 1 month, I have done free lance writing and features for our local newspaper The Courier Herald, Dublin Georgia. So why not share one of my articles with you here today, as it is the perfect time.
In many countries, tomorrow is the 'big' day for children. By MARIET(TE) VEDDER (read below the story WHY I changed my name)... 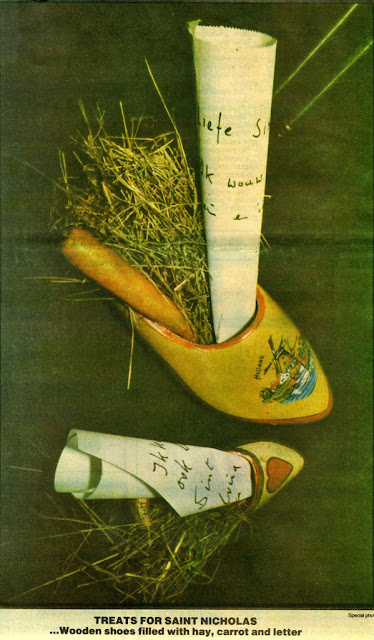 The wooden shoe with the red heart is actually my personal shoe when I was 3 years old... Below this post you find a link: {Our Living Room} where you can see those wooden shoes in front of the fire place.

In the Netherlands, families decorate their homes for Christmas and have Christmas trees just like in the United States. The big difference between the celebration of the two countries is in the gift-giving. In Holland it is not done on Christmas day, but on Dec. 5, Saint Nicholas Day. This is the name day of St. Nicholas who, during the Middle Ages was the Bishop of Myra in Turkey. As legend goes, he bathed and fed and gave each of the 500 poor children of Myra a gift on his day.

Now Saint Nicholas Day is celebrated in many countries. In Czechoslovakia, Hungary, Germany and Belgium, as well as in the Netherlands, this is the day when gifts are exchanged among family members, and for the children in particular there are all sorts of other rituals connected with Saint Nicholas.

Every night from Dec. 1 on, Dutch children put in front of the fireplace a wooden shoe filled with hay and a carrot for the bishop's horse and cookies and candy for Saint Nicholas and his helper, Peter.  They also write a letter to Saint Nicholas wherein they mention their 'wishes' for the 5th of December. To make sure that it gets his attention, it goes in the wooden shoe, too.
Every morning the children find the wooden shoe empty, which means to them that Saint Nicholas, who rides on his white horse over the rooftops, sent his helper, Peter, down the chimney to pick up the goodies. Saint Nicholas always used a Moorish 'Peter' as a helper because he had to go down the chimney, for this is a 'black' job.
Then on the evening of the 5th of December, Saint Nicholas personally visits the families and Peter hands out the gifts from a big burlap sack.
If the children behaved all year, they are praised. But if a child has misbehaved, Peter threatens to put him or her in the burlap sack and take them back to Spain. The children sing a song for the charitable duo, and Peter throws little cookies (pepernoten) at them -- not to hurt them but to reward them for their sweet serenade.
And the nice thing about all this is, that when Christmas Day finally comes, there is another little present under the tree.
Could it be that the expression 'Double Dutch' comes from this?
For those that don't read English I have typed the entire text again, so they can translate it.
Funny is that in 1985, December 4, was also on a Wednesday...
My writing at that time got edited by the editor of the news paper.
So now you know the story of Saint Nicholas. It were the Dutch that brought Sinterklaas to the New World, to New Amsterdam. Present day New York in The New Netherlands. The Dutch word Sinterklaas morphed into Santa Claus... See link below about the origin of Santa Claus.

Related links:
LinkedIn Mariette VandenMunckhof-Vedder scroll down for reading: Free lance writer and features
{Our Living Room} previous post where you can see my wooden shoes in front of the fire place
The Origin of Santa Claus Video about history, listen till the end to hear how Sinterklaas morphed into Santa Claus...
{# 148 and my blog is 1 year old today!} previous blog post where I explain WHY I changed to  Mariette

Posted by Mariette VandenMunckhof-Vedder at 6:35 PM