So on April 11, 1992 we arrived on KLM Royal Dutch Airlines in Amsterdam, with our 92 kilos of luggage, coming all the way from Jakarta, Indonesia.
The customs inquired about the boxes and upon showing once again the photos from the robbery and explaining that all that was left we bring home, they let us pass.
Putting things in the locker and then traveling once more by rail to the South where my Parents lived. 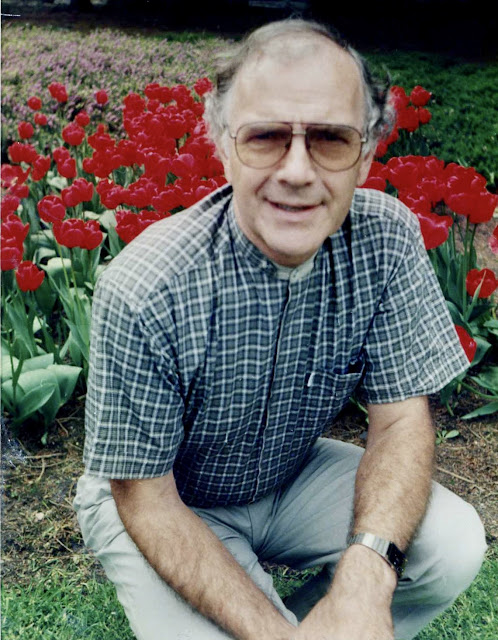 This is husband Pieter posing in front of the tulips at my Parents' place.
Keep in mind that all our clothes got robbed; shoes and everything. Except what we had on our back and inside our luggage, coming from work in India...
We gave away both our hightop shoes to the people working in the hot compost, barefooted. You find link below post from previous adventures.

On April 13, during our 2nd night at my Parents' in my former bedroom, we woke up at 3:22 AM by an earthquake! The rattling and shaking lasted for 20 seconds.
Pieter said very calmly: 'Now THAT is an earthquake!'... Wow.
Yes, in my Province of Limburg... With 5.5 on the scale of Richter!
The above article appeared in the then bi-lingual Dutch/American newspaper the Windmill, a bi-weekly publication.
On April 15, I had my hair cut, the LONG braid got snatched off with the hairdresser's scissors. See post below about it where I show it being framed. 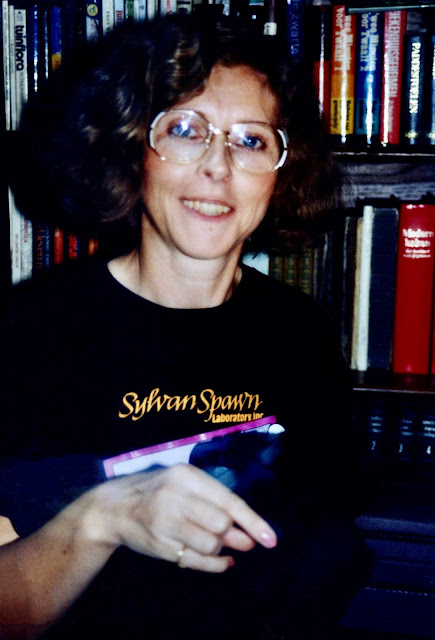 Happy at home and with short hair!
The weather is still inclement and rather cold.
We enjoy a nice Easter weekend and on April 20, on 2nd Easter Day we went to the Easter Concert of Dad's choir with a youth choir; very well.
On Monday we went to the city for buying a Sharp microwave for Mom & Dad as a gift.
We went to brother Piet's birthday on the 23rd. 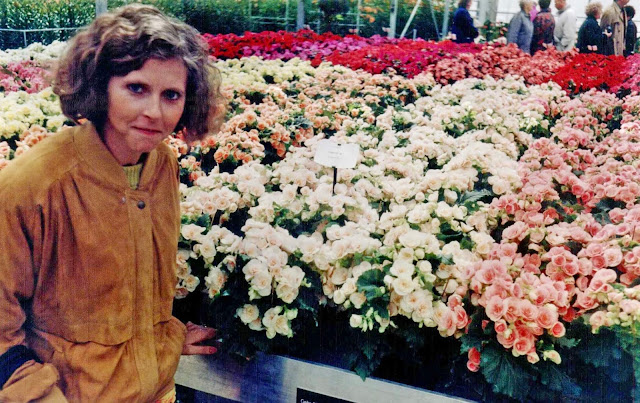 On Saturday, April 25, we went with the early train of 6:30 AM to Zoetermeer for the Floriade. The biggest international Garden Exhibit that the Dutch hold every 10 years.
But oh, it was such inclement weather and cold and miserable...
We did not have the clothes for it, aside from our newly purchased leather jackets from the Leather Garment Factory in India.
Above, I'm admiring Begonias. 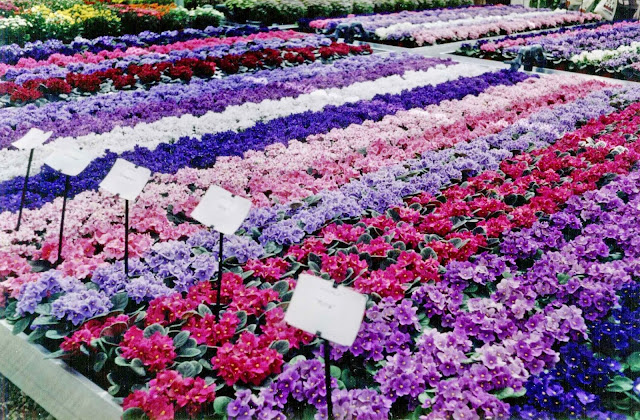 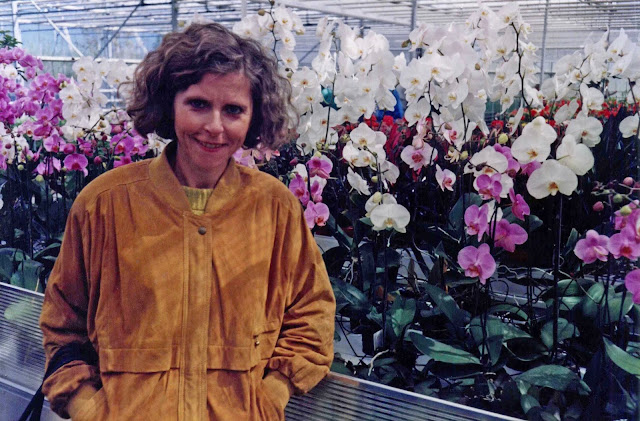 I'm happy for being indoors in an orchid greenhouse and out of the chilling wind! 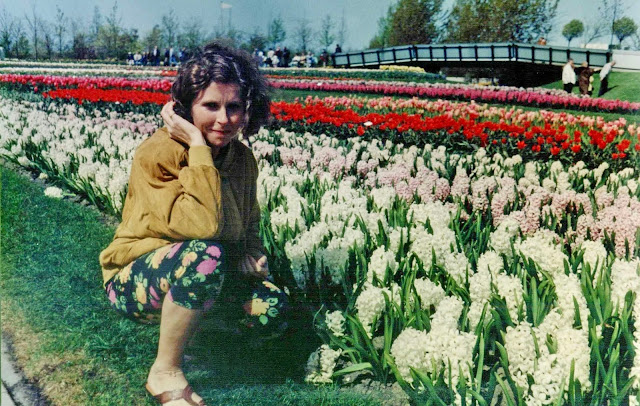 Wearing my newly bought sandals from Malioboro, Yogyakarta/Indonesia...
Remember ALL shoes got stolen. Those leggings were certainly not warming me much!
We both decided then and there to stock up on some warmer clothes, shoes and, all for keeping in The Netherlands... 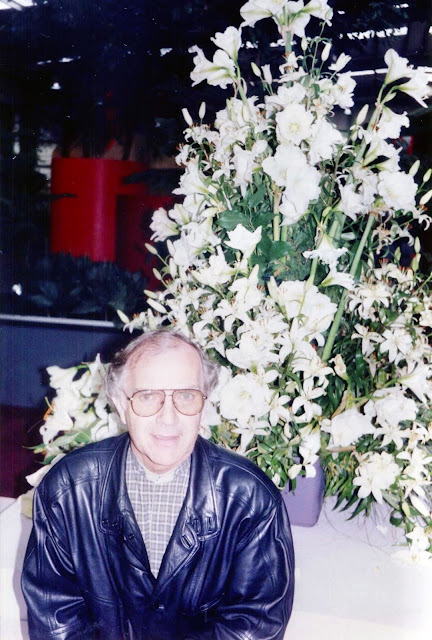 Pieter was not as cold, even though wearing a short sleeved shirt was also not sufficient... 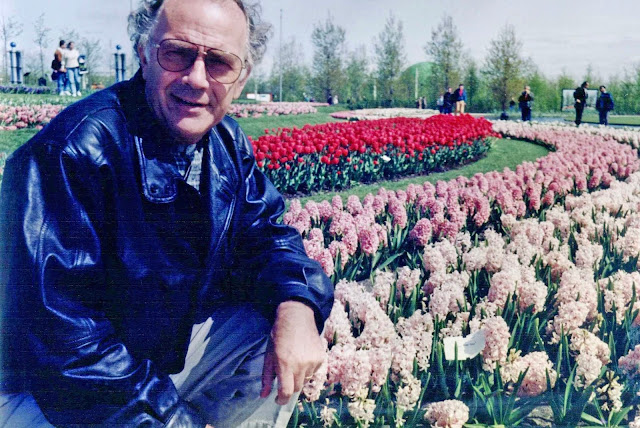 So typically Dutch with red tulips and lots of fragrant hyacinths. 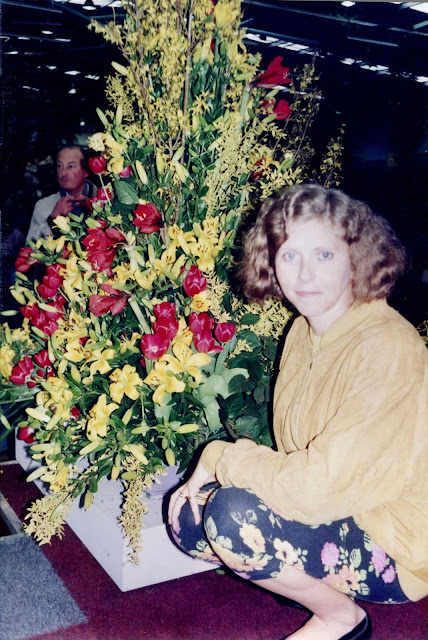 Being indoors was a lot better, I see that here I swapped my sandals for shoes!
But we certainly enjoyed being there for the Floriade.
~
On April 26, brother Harry treated both of us and Mom & Dad on a dinner to celebrate his belated 12.5 year wedding anniversary. 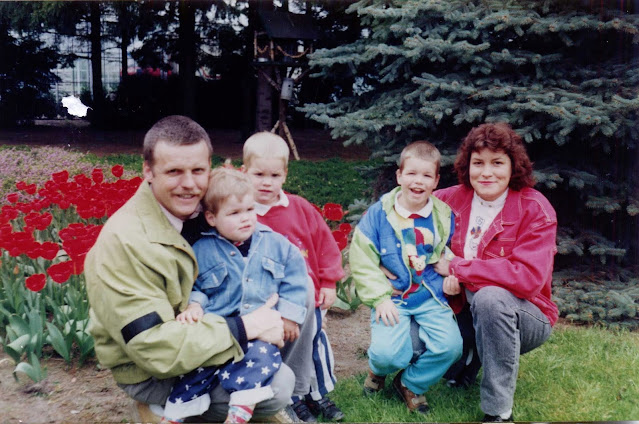 Brother Harry on the left, with his wife and their three little ones...
It was very special, together.
We also celebrated Pieter's Birthday with family on the 29th.
That year, we'd come to The Netherlands early February, en route to our work to Indonesia, for celebrating my Birthday with my Parents and family and next day brother Harry's and also Mom's Birthday five days later.
So now fate had it that due to our early leaving from Indonesia, also Pieter's Birthday got celebrated in our birth country.
Very special time this visit for being with family and friends!
On May 1, on Friday, we go by train to the airport.
We had dropped off all the excessive luggage the day before, by car, and placed it in a locker. 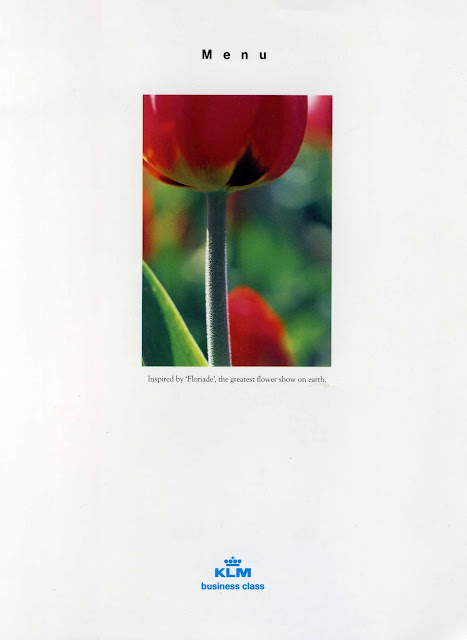 There we go on May 1, with KLM Royal Dutch Airlines finally going home to Atlanta, Georgia/USA
We've come a long way with the remnants from our Life in Indonesia as baggage... Our Exodus!
BUT we sure got a Royal treatment with an upgrade to Business Class on our Courtesy Card with KLM
Menu card reads: Inspired by 'Floriade', the greatest flower show on earth. 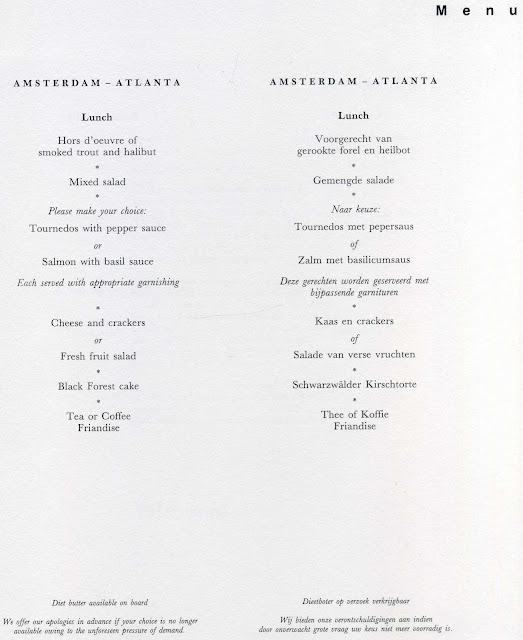 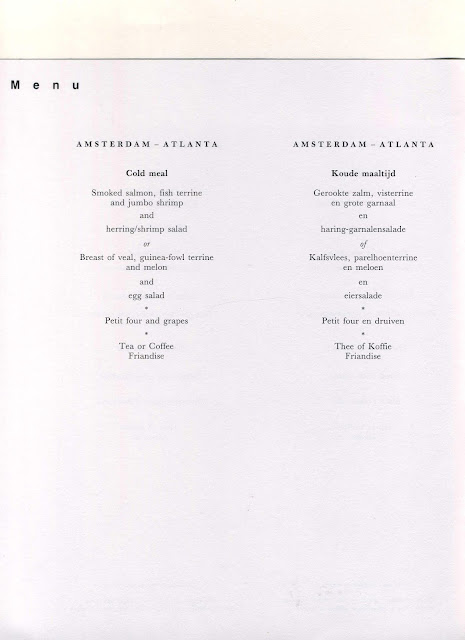 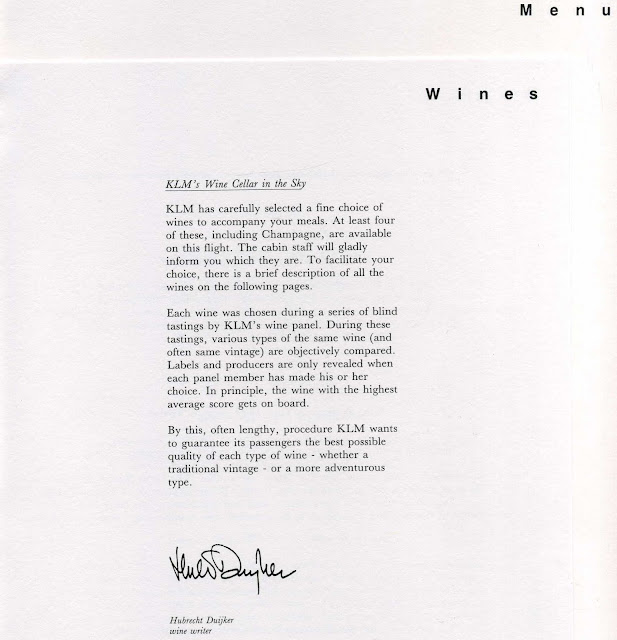 KLM's Wine Cellar in the Sky 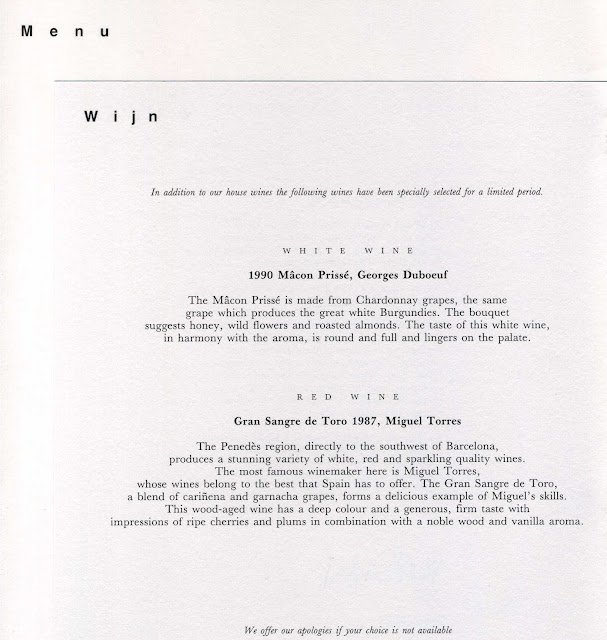 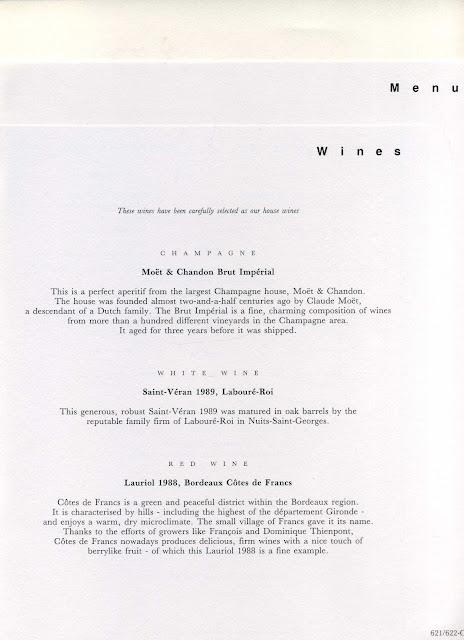 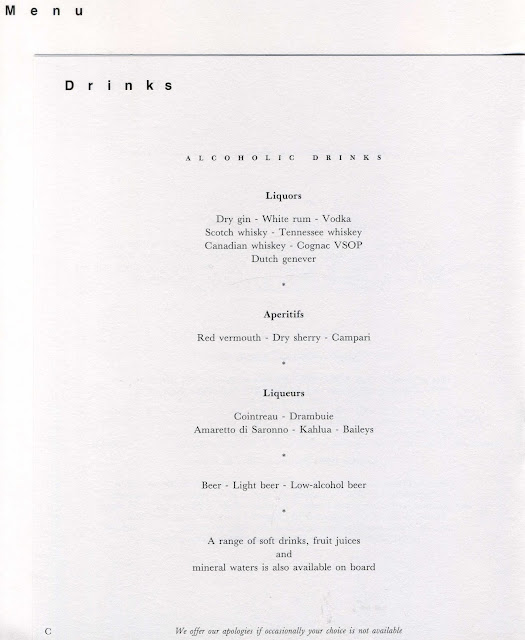 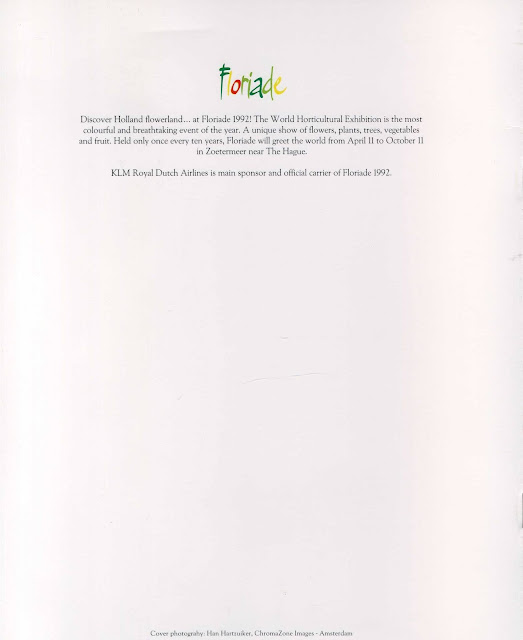 Discover Holland flowerland... at Floriade 1992! The World Horticultural Exhibition is the most colorful and breathtaking event of the year. A unique show of flowers, plants, trees, vegetables and fruit. Held only once every ten years, Floriade will greet the world from April 11 to October 11 in Zoetermeer near The Hague.
KLM Royal Airlines is main sponsor and official carrier of Floriade 1992.

They sure did carry us back home in a very comfortable way with our upgrade to business class, thanks to the courtesy card we each had. We felt quite pampered in the upper deck.
A very appropriate way for sealing off our Life in Indonesia..