From Singapore to Jakarta and SURPRISE upon arrival at our Villa

On March 2, 1992 we arrived from Singapore (where we spent one night after our consulting work period in India), in Jakarta.
Remember, that I found the magazine with mention of our boss on the cover...
Bad news!
By taxi we arrived at the Hyatt Aryaduta Hotel.
We now had the kitty room decor in the Regency Club. 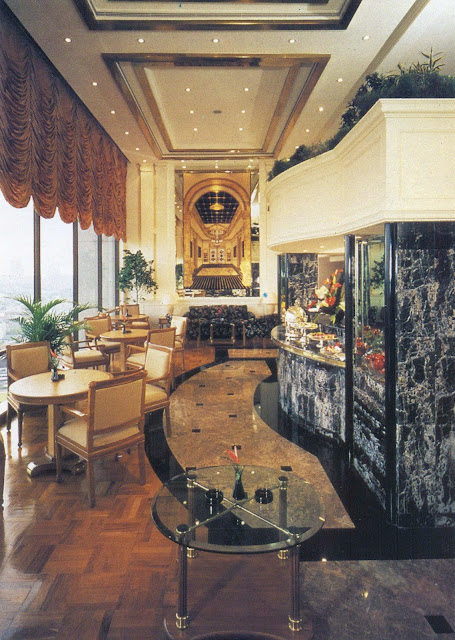 We go for a coffee with petit-four in the private lounge, with wonderful view from this height.
On March 3, after a good night sleep, we flew to Yogyakarta, Central Java, where we arrived around 15:00 and the driver was waiting for us.
A lovely drive up into the mountains of a good two hours.
Then awaits us a big surprise.
Things looked suspicious, with so many people at the gate of our villa... and the police was there, with security people from Dieng Djaya, our company.
Turned out that they'd robbed our villa for the 3rd time. 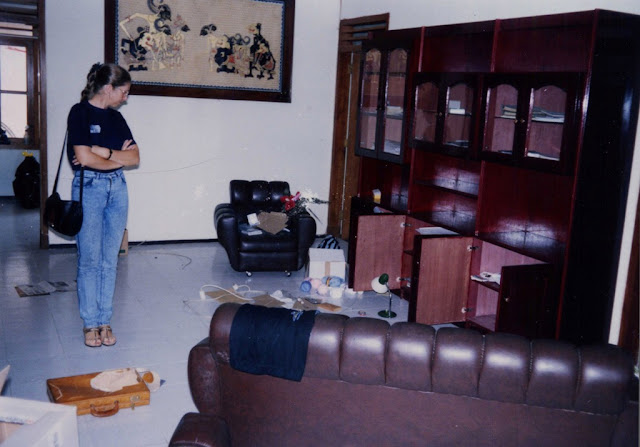 What a sight, what a mess, what an experience to find your home like this.
Pieter's Royal Gift, purchased at Harrods, London, the Tanner Krolle Attaché was cut to pieces... see previous post below. 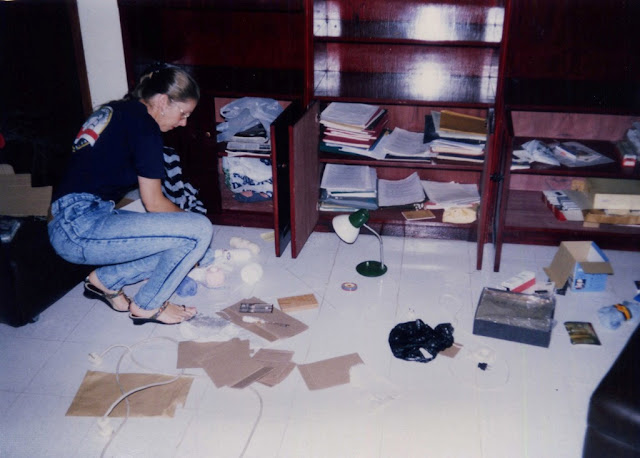 Ideally, you would love to turn around and fly home to the USA...
Our books and training material they left untouched!
~
We did move into a guest bungalow on the premises of the company.
We decided to quit, even if our contract said we had to come back three more periods of two months!
The company being in financial trouble...
It's not worth all the stress, aside form having to wait for our travel expenses being reimbursed; we were still waiting on quite a sum of money...
On March 9 and 16, Pieter goes with me to the University clinic in Yogyakarta for having several fillings and also his partial repaired. It was not easy, understanding the dentist when he spoke while wearing his mask! But I managed to translate, and communicate while Pieter just 'opened' up his mouth for treatment! I also had my teeth cleaned.
We laughed a lot also.
We got a copy of the police report and had to hand in our Buku Biru (work permit) for our departure visa.
Pieter read in his new book from Scarlet, the sequel of Gone with the Wind.
(We only last week, finally found the time to watch the two video tapes of the movie... catching up on our life after completing our book!)
On March 19, the six perpetrators of the robbery in our villa got caught...
On March 20, we bring our Brabantia ironing board to Yati, my seamstress, so she can use it.
March 22, we visit the boarding school for saying our goodbye to all the girls that frequented our home on Sunday afternoons.
March 27, in Yogyakarta at Malioboro I found some sandals to wear.
Remember that both of us had given our hightops away to the compost people in India, since we had several pairs of shoes in Indonesia. ZERO!
April 2, on our way down from the Dieng Plateau area where the mushroom farms were located, we saw a cow tied to a beam on the bridge to be slaughtered. Not a very exhilarating sight... In these days around Idul Fitri, there is a lot of slaughter going on.
April 3, we went to Solo and the Kraton.
We also bought our final, fresh durian and ate half of it... April 5, made photos from my LONG hair. Longest hair ever.
April 8, we say our final goodbye at the boarding school, you feel that there is true affection here, especially with Agnes, Wiwik and actually all of them!
We will not soon forget them...
On april 9, together with our driver Praytno and his wife, we depart for Jakarta, by car.
A beautiful route, via Banjarnegara, Purwokerto etc., in the direction of Cirebon (where Pieter's eldest brother was stationed). We arrived timely in Jakarta via the Interstate, for the final stretch it went rather rapid.
April 10, on Friday we go to the ABN/AMRO Bank for guilders, the Hyatt Aryaduta's neighboring Umum Bank Nasional did not have them. We now have a far smaller bundle of money... Those Rupiahs add up into the millions rather quick.
We check out and went to the airport with our 92 kg of luggage.
We would have to pay at least a fee over 15 excessive kilos, US $ 430.
Well, I had a feeling and luckily had put the photos in my purse to show that we got robbed and cleaned out, and this was ALL what was left.
The lady disappeared to discuss with her manager and came back with vouchers for the first class lounge and NO FEE. Pieter had to change his shirt, he got hot from all this. But now we could relax in the first class lounge. Pieter told me that I had to go shop and find me something special since I'd earned it! 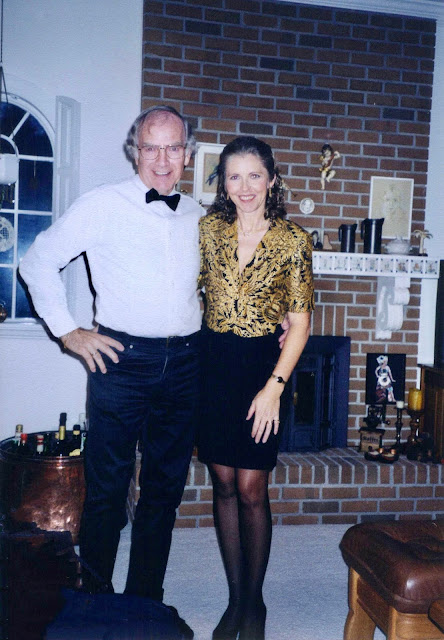 That's when I bought the hand painted silk batik stole that I converted into a bolero.
Photo shows my sewing creation from that hand painted with gold silk batik stole...
~
Around 19:00  we depart on KLM Royal Dutch Airlines, from Jakarta to Amsterdam in seats 24 A+B... with mixed feelings but rather relieved, now that all the stress is behind us.