Tried hard to comfort him and to keep him healthy, with some more meds from vet Amanda.

He did not eat his wet food with the antibiotics after two days of 'accepting' it being added.

Other meds, I managed but there was no improvement.

I'd stayed with him for a total of two weeks, in the Rose Suite, a kind of a kitty hospice... for letting him have his rest, feeling loved and cared for. Yes, like a baby, feeding him many times little meals.

But on Wednesday, October 28, we had vet Amanda come to our home and inside the Rose Suite, in my arms he went to eternity... peacefully.

I'd carried him outside one final time to meet all of his siblings by adoption and for being one last time inside the gazebo, his favorite spot.

Then I let him lounge on the lawn, close to the walkway from the driveway towards the Rose Suite.

He was so happy, so at peace and that felt good!

Before supper time for his siblings, I placed him inside the kitty bed in the garage so they all knew he was gone... We have done so also with Sacha girl before.

After having our tea and mixed nuts, we went together to the spot behind the greenhouse, for his burial.

On Thursday afternoon, June 17, 2004 over a cup of tea, we spotted this adorable kitten 'SALEM'... (right) in our local newspaper.
He so resembled my Dutch kitten Bartje...
So next day, after Rotary Club lunch, Pieter went to the Humane Society to look at them, he got to see also NOISY, his sister.
Then we both went back to get SALEM!
It was love at first sight, Barty as we called him instead, did suck on my earlobe while holding him and also on my pinky...
We took  this 1.4 kg (3 pound) kitten home with us.
I held him and never put him back in his cage. His sister already got adopted, so I've never seen her.
We took him home to our other Spooky boy, who met his baby brother with such love.
He gave him a 'bath' and cuddled him like he was his Mama, and that for a male cat. 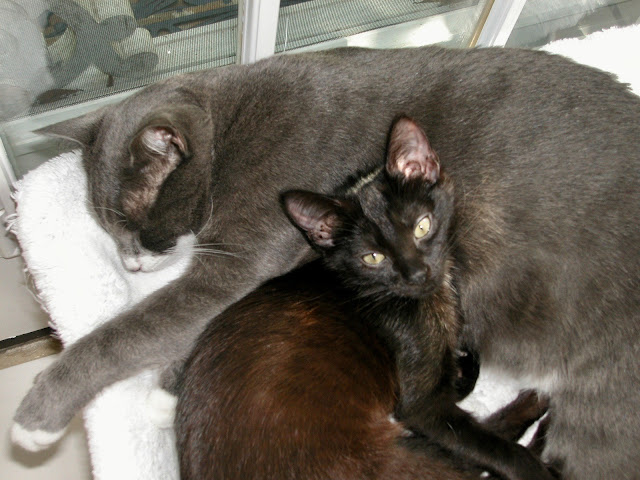 June 27, Spooky our tuxedo boy with Barty-baby on the oak hocker with cotton mat, in front of our veranda door.
SO ADORABLE! 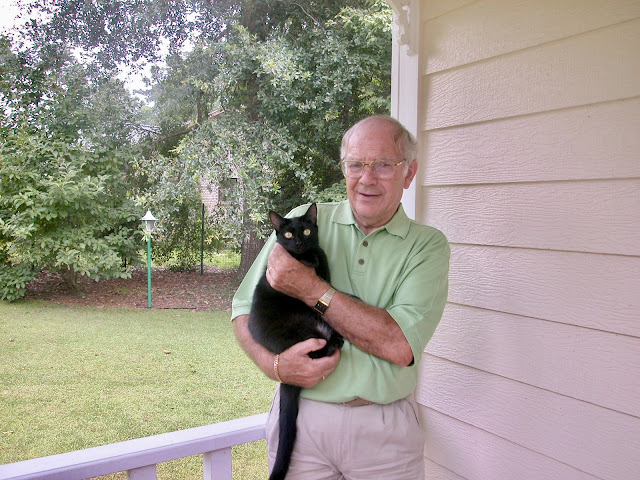 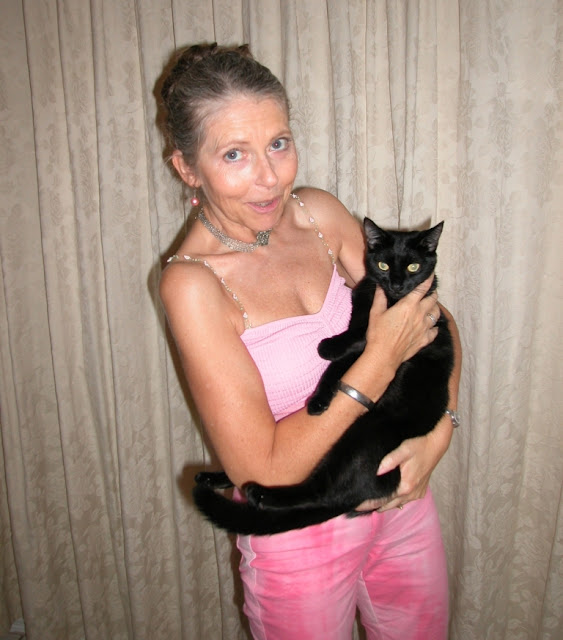 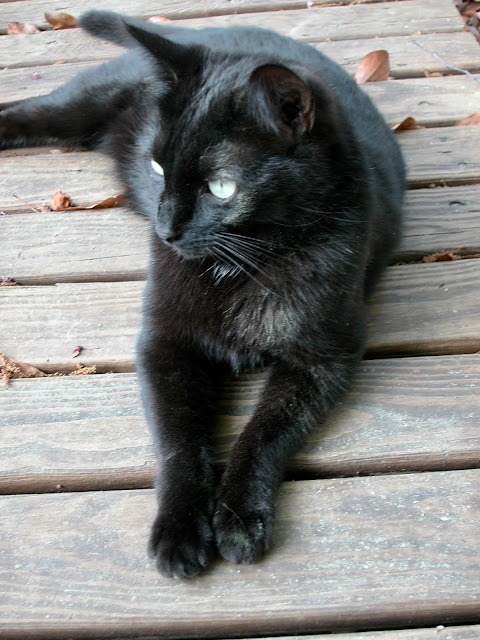 Barty had a few white hair on his chest and also his whiskers on one side were lighter.
Here he is on March 29, 2007 on the wood trail in our garden. 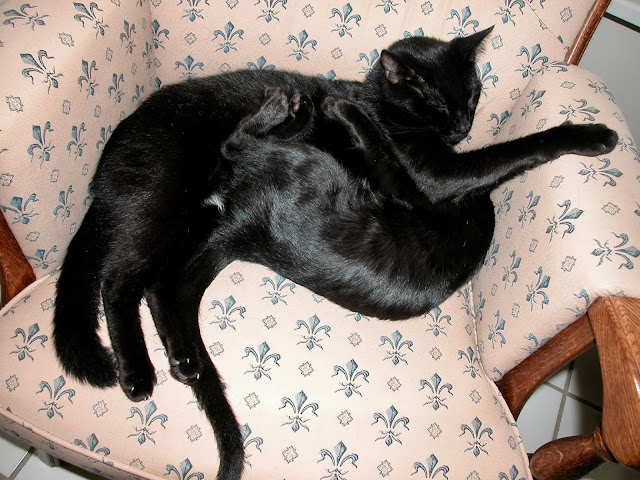 This is so adorable!
Barty holding and comforting his baby brother Bandido on August 13, 2007 after Bandido got neutered...
Like: 'Come here; I know how that feels!'
Seen here is Barty's white pluck of hair on his under belly... 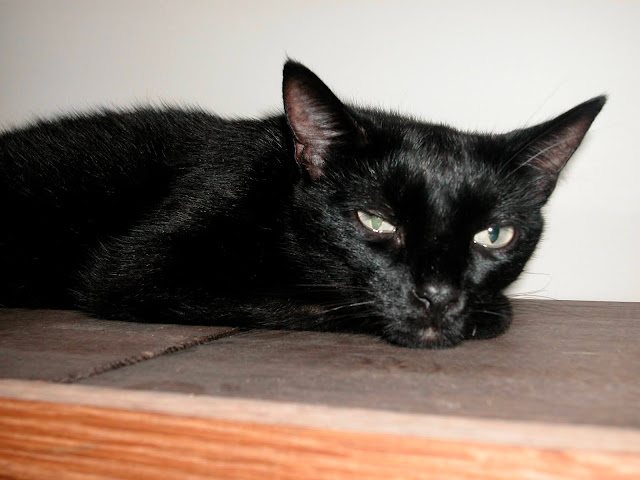 June 30, 2008 shows Barty on top of the oak wall unit in the living room.
He jumped on top, from the backrest of our leather love seat!
Barty was quite an artist in jumping high... 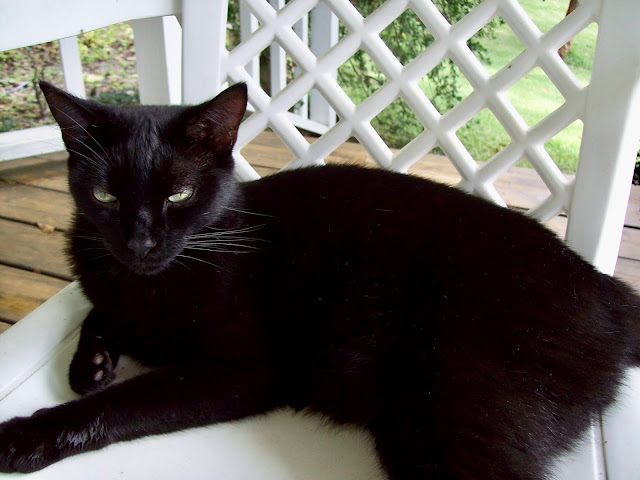 September 12, 2008 Barty in the gazebo, his favorite spot...
Photo taken by Anita, our Foster Daughter from Indonesia, who stayed with us at the time.
She also stayed with us when Barty still was a young kitten and they both loved each other very much! 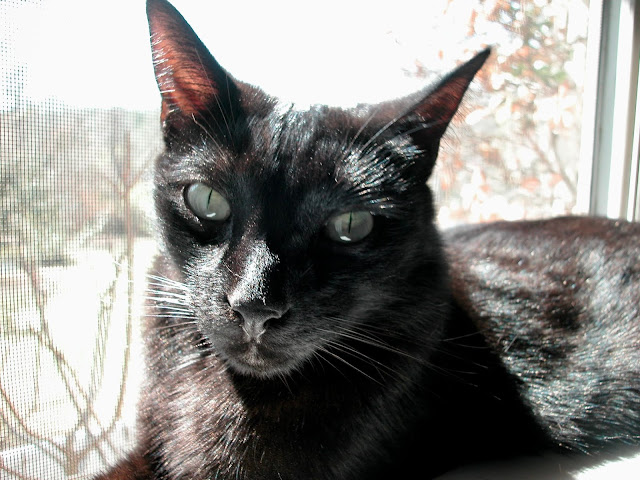 Barty on his 5th Birthday, March 17 of 2009, in front of the  open window with screen, in our bathroom.
He sure loved that spot, where he could hear and watch the birdies... 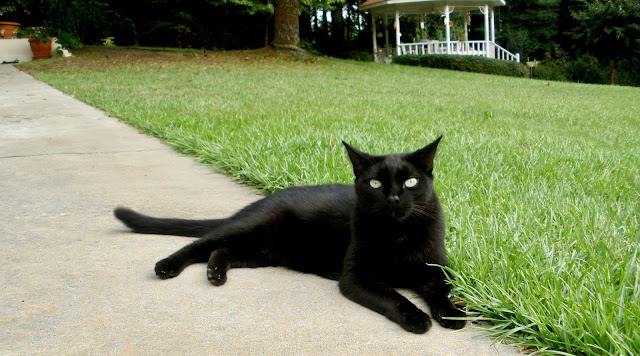 August 16, 2011 on the walkway to the Rose Suite with our gazebo in the back.
Just about 20 minutes before his death, I had let him lounge in the grass, exactly in this spot, seen to the right... 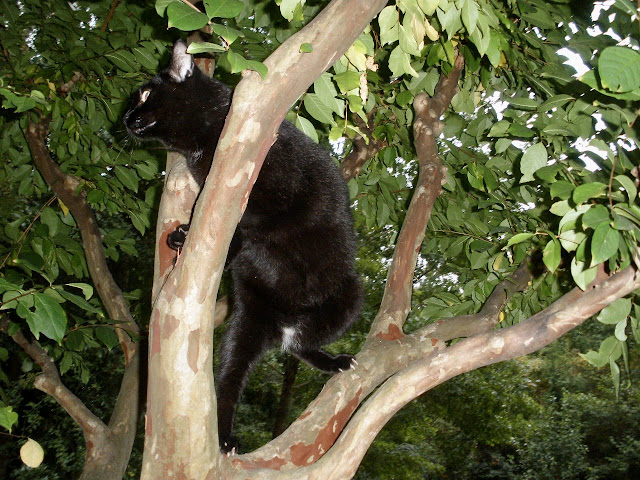 Whenever we were in the garden, most of our kittens were following us.
So did Barty on October 7, 2011 when he wanted to show off his climbing skills.
He rushed up into this Crepe Myrtle tree, behind our gazebo.
Here too, you clearly can see his white spot on the underbelly... 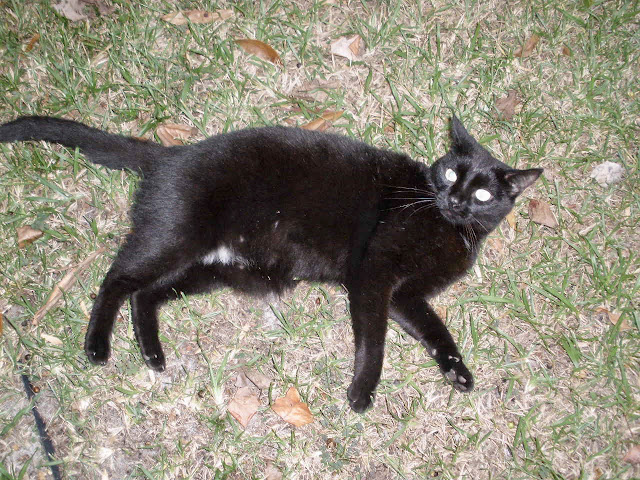 October 7, 2011 after Barty jumped down and looking like; did you see this Mami?
Yes, we saw you do this and we also see your white underbelly... 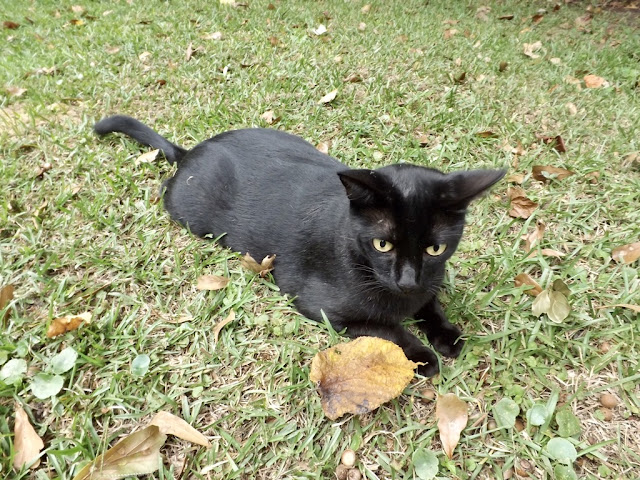 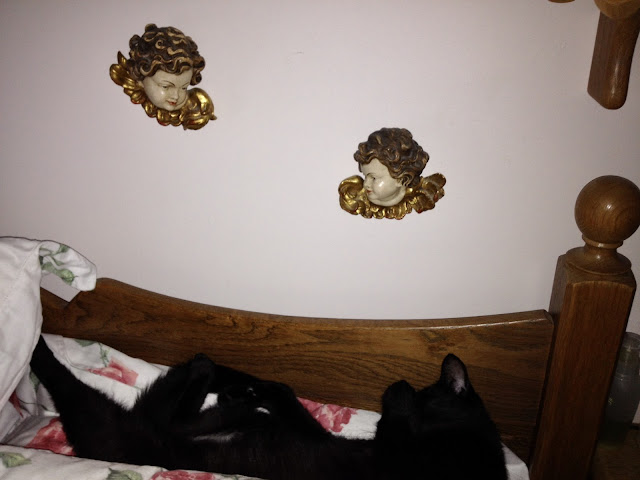 Here Barty is in dreamland... underneath the wooden cherubs.
He slept on the European square pillow, which is under our standard pillow.
Photo from July 13, 2012 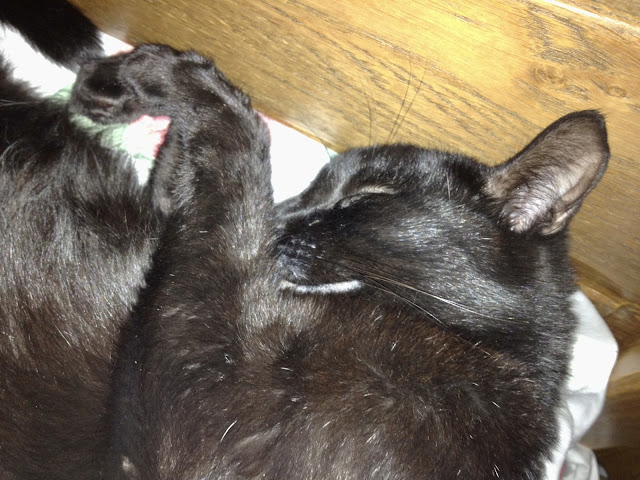 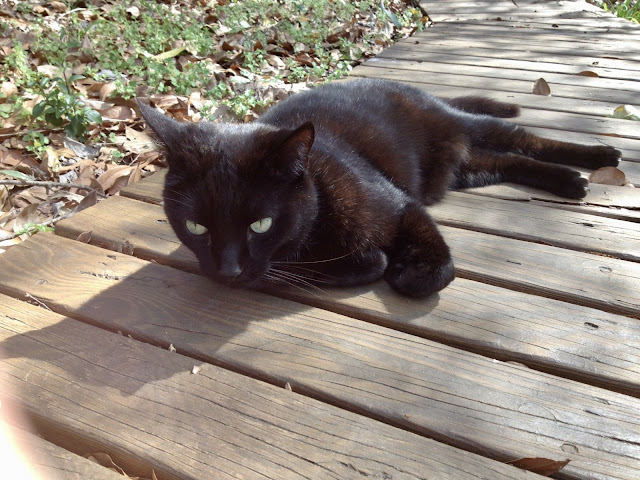 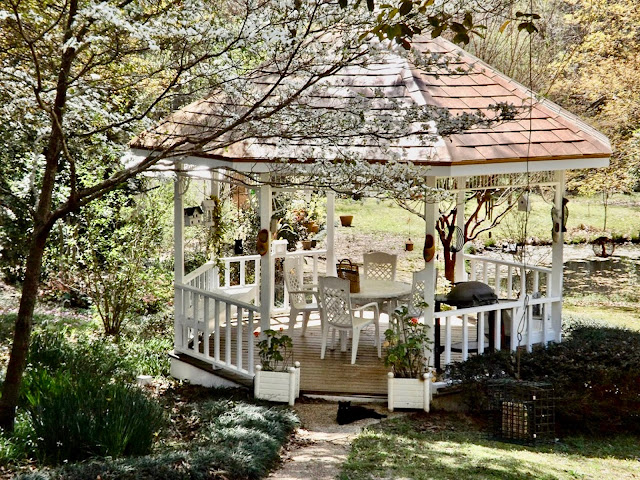 Barty lounging in front of our gazebo on April 3, 2014.
He also loved to lounge on the two side benches or on a chair. 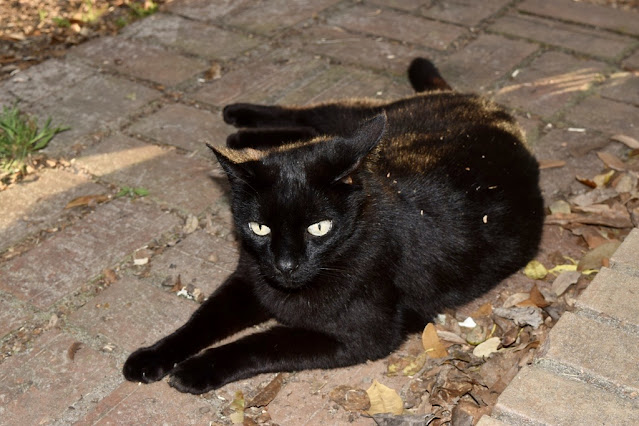 Barty on his Birthday, March 17 of 2015, on the tiny brick patio below the stairs to our veranda. 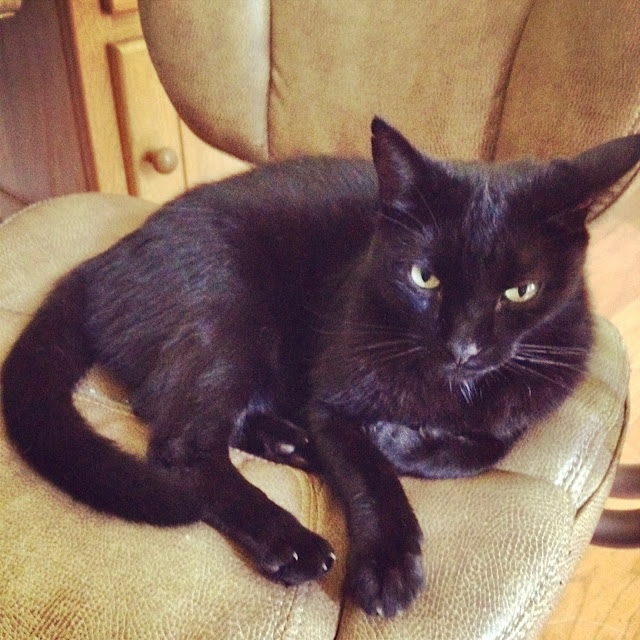 In the evening, Barty very much was my office kitty!
Here he lounges on my previous office chair on August 24, 2015
Barty was a perfect lap kitty!!! 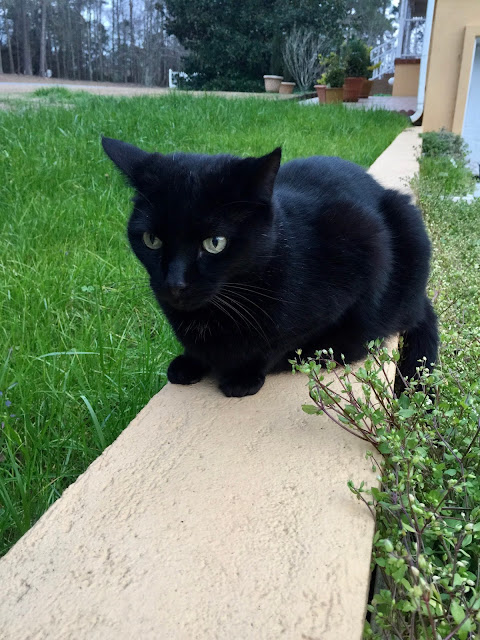 Barty on February 20, 2016, on top of the retainer wall alongside the driveway. 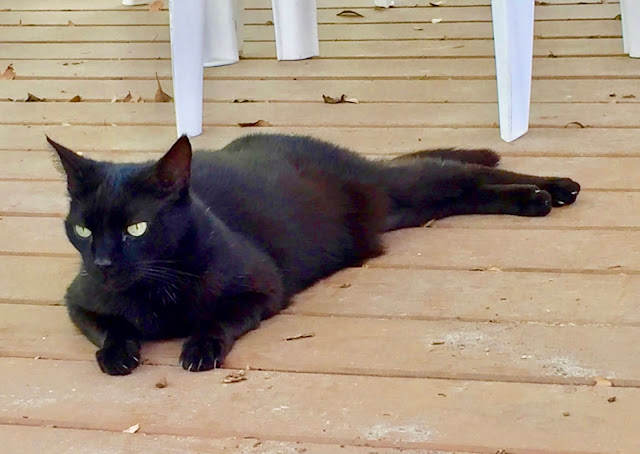 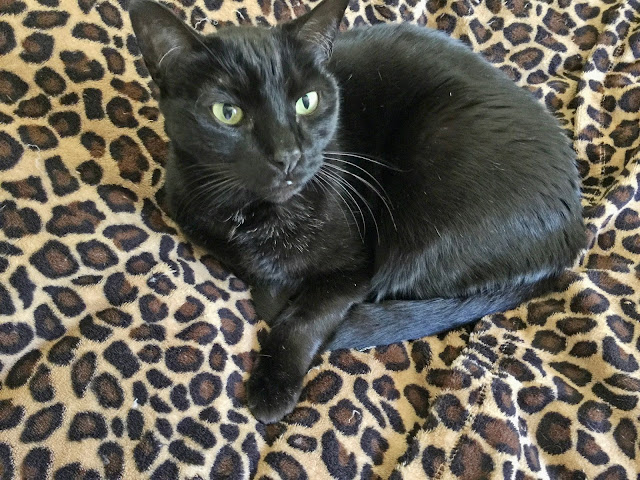 Barty lounging on top of the guest bed, on one of their kitty blankets.
This was April 5, 2018 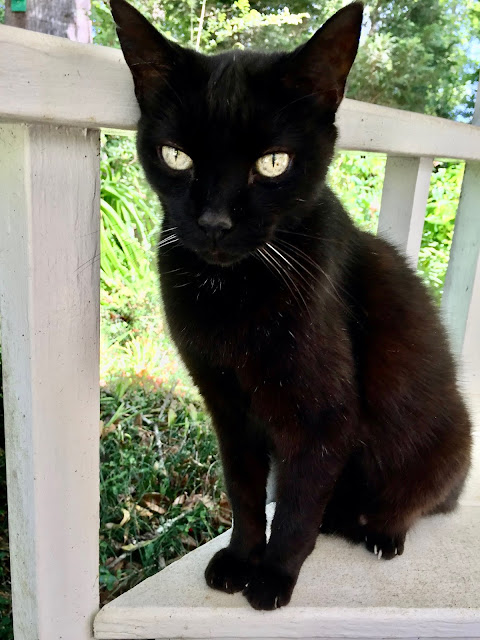 This is Barty on May 5, 2020... already a lot skinnier and you clearly can see his white whiskers.
On his final day his weight was 3 kg or 6.6 pound...
This very sweet and gentle boy will be so missed!
He has been my special cat nurse, see post below: Angels Birthdays & Fortunes.
No doubt they do have a great sense for feeling someone's well being!
He could literally put his 'arms' around my neck, so comforting... Will sure miss that but we both are grateful for having had him this long.
He was like a special black angel; almost hard to believe that he was a kitty!
Those that never have had such a special pet, probably can't understand, but those that do know, will recognize this special affection and their loyal love.
R.I.P. Sweet Barty Boy

{CATWALK} | previous post as they followed us through the wood garden and rolling in the sand...

{Our Rose Suite Bedroom} | Where Barty stayed his final 14 days with me, exactly with the same rose bed linens...

{Goodbye Gibson...} | Barty dreaming that he too would live as long as Gibson... and HE DID!

Email ThisBlogThis!Share to TwitterShare to FacebookShare to Pinterest
Labels: Cherubs, Daughter, Our Bridges and Wood Trail, Our Felines, Our Gazebo