1966-5 CHAMPIGNONCULTUUR
This is some interesting history about how we came to COOLING IN MUSHROOM HOUSES, right from the pioneering times...
In Nature, mushrooms only develop during the cooler season. But by commercially growing them year round, we have to do something during summer time.
We should however, not make mushrooms feel miserable... 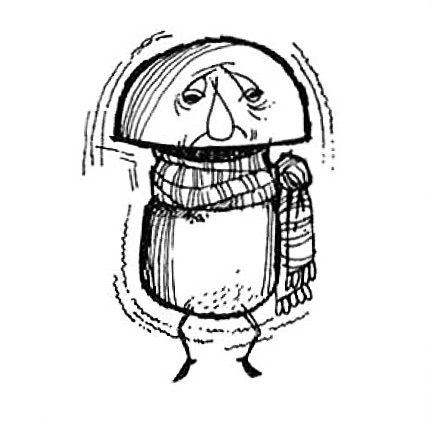 COOLING IN MUSHROOM HOUSES
General
Although most people look longing for summer, a mushroom grower gets the fright of his life when the outside temperature rises to summer values. The mushrooms like to have a temperature of 15-17ºC and it becomes difficult to keep it cool inside the rooms at outdoor temperatures of 25-30ºC. This especially when the heat period lasts a bit longer and night temperatures also increase.
At temperatures in the growing rooms of 18-20ºC, the mushrooms grow quickly and open prematurely, so that the quality deteriorates greatly. At these higher temperatures and therefore greater activity of the mycelium and the growing mushrooms, the production of carbon dioxide becomes much greater.
It is known that with an increase in temperature of 1ºC, carbon dioxide production increases by 20%. This means that in a warm period with high temperatures in the growing rooms, additional ventilation should be done to keep the CO₂ content low enough. However, a lot of ventilation means that, especially during the day, warm air is brought into the rooms, which can increase the temperature even further. Non-ventilation during the day means that the CO₂ content in the rooms is too high, which greatly reduces the quality and can cause the buttons to die. At such a time, a mushroom grower is virtually powerless or he should have a cooling unit.
We in the Netherlands have little experience with the use of coolers in mushroom cultivation. We cannot therefore say from experience what capacity such a machine should have in order to keep the temperature at e.g. 15ºC. We have therefore started to calculate whether we could find out something this way.
Heat production
The starting point in this calculation was the production of carbon dioxide. Everyone knows that CO₂ is produced by the burning off of carbohydrates using oxygen and that heat is released. From all kinds of studies we know quite accurately how much carbon dioxide per kg of compost is produced. According to researchers, a maximum of 0.10 grams of CO₂ per kg of compost (e.g. in a second break) produced by the hour.
If we claim that we use about 100 kg of compost per square meter in our growing rooms, CO₂ production would be 100 x 0.10 grams = 10 grams per square meter per hour.
It is known ¹) how much Kcal. are released at the burning off of carbohydrates according to the
formula  C₆H₁₂O₆ + 6O₂→ 6CO₂ + 6H₂), namely 674 Kcal. We also know that during the harvest
period 10 grams of CO₂ is released per square meter per hour. From this it can be calculated that per square meter per hour there is 10 : 264 x 674 = 25.5 Kcal. heat release.
We have to bear in mind that not all energy released at the burn off (relief) of carbon is converted into
heat. Some of the energy released is recaptured when other formations are built.
If we agree that 70% of the released energy is converted into heat, then 1 square meter bed with a heavy break would still deliver about 18 Kcal per hour.
¹) 180 grams C₆H₁₂O₆ + 192 grams O₂ →  264 grams CO₂ + 108 grams H₂O + 674 Kcal. 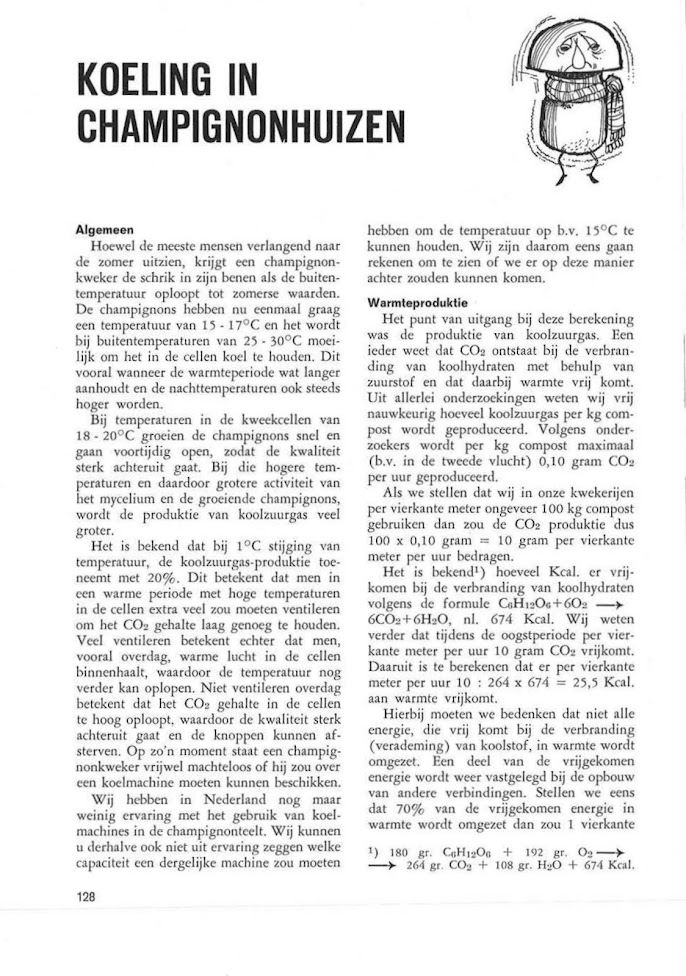 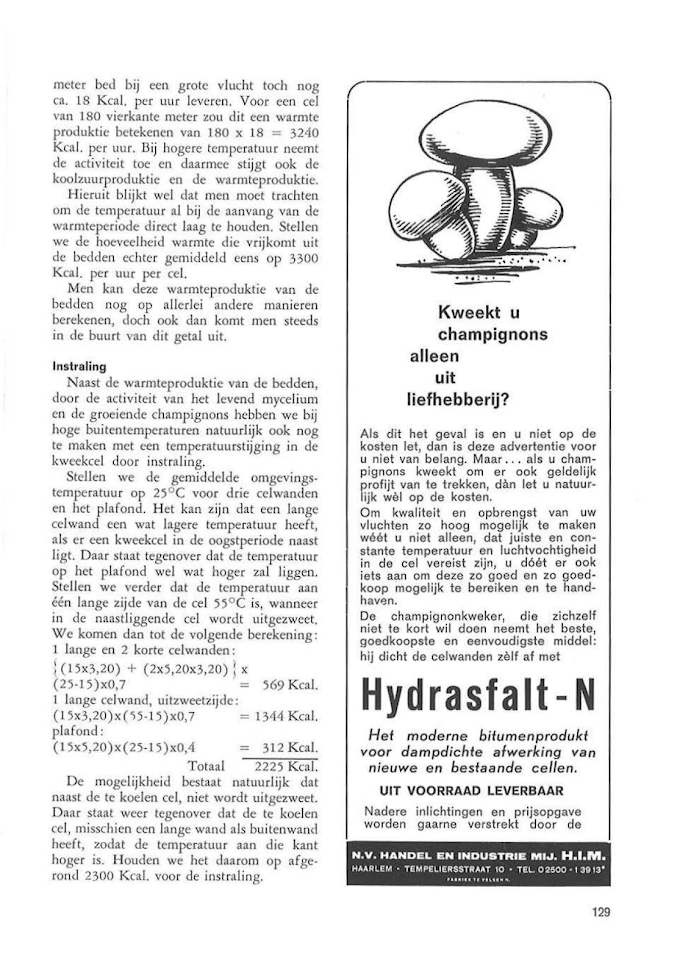 Ventilation
The third possibility that allows the temperature in the rooms to rise in hot weather is the necessary ventilation.
We assume that the air content of the rooms is refreshed on average 5 times per hour during a decent production. We also assume that the air outside has a temperature of e.g. 25ºC and should be cooled to 15ºC. If we set the contents of a room at approximately 230 m³, 5 x 230 = 1150 m³ of air must be refreshed and cooled per hour. When cooling, 1150 x (25-15) x 0.31 Kcal =  ± 3400 Kcal. must be removed from the ventilation air.
Addition
Altogether we now arrive at 3300 (heat production beds) plus 2300 (irradiation) plus 3400 (ventilation) = 9000 Kcal. by the hour. Now it can be said that by warm weather outside it is only a few hours a day 25ºC and the nights are much cooler. This is indeed the case, but on the other hand, the 9000 Kcal. referred to has no overcapacity in case it becomes 28ºC. Also, there is still no cooling from e.g. 25 to 15ºC after casing.
That 9,000 Kcal. cooling capacity is only needed to keep the temperature at a certain value during the harvest period. On the other hand, of course, one can allow a 1 degree increase during the day and gain something at night by cooling the beds and the space to e.g. 14ºC, so that one has some reserve during the day.
If we want to reduce the temperature from 25ºC to 15ºC in two days after casing, this again requires a considerable extra capacity. Everyone understands that the heat production of the beds during mycelium growth and immediately after casing is enormous. However, we assume that the temperature increase of the beds can be controlled by the ventilation and that the cooling of the compost with casing must be done by the cooler. Let's say that there is 18 tons of compost in the beds with 5 tons of casing and we assume that the specific heat of this material is 0.7. In order to cool this quantity of material (apart from the racks, etc.) from 25 to 15ºC, it is necessary:
23000 x (25-15) x 0.7 = 161000 Kcal. in 48 hours. This will be approximately 3350 Kcal per hour. In addition, the entire building mass, walls, floors, ceiling, etc. needs to be cooled down, but let's assume that a cooler night brings some relief to this.
Another question is also whether it is economically justified to install a cooler with a capacity that is tailored to some extreme days. Anyway, the amount of Kcal. that should be able to be taken away appears to be ever bigger than we initially thought. Last year we gained some experience at the Experimental Station with a General Electric cooler, with a capacity of 2800 Kcal. on a room of approximately 66 m² of growing surface. This machine could indeed keep the temperature rise within limits, but there was no question of cooling.
For a commercial mushroom farm with rooms of about 180 m² of growing surface, it also shows that in order to maintain a certain temperature in hot summer weather, certainly a cooling capacity of 9000 Kcal. per room per hour will be necessary. In order to absorb that amount of heat, a fairly large amount of air is needed. This means that strong air movement in the room is necessary. The relative humidity of the air will go sharply down from cooling down and then warming up. A strong air movement with air of low humidity again causes problems with regard to drying out of the beds and the scaliness of the mushrooms. That may be next time.
We are aware that this case has been approached theoretically in the foregoing and that there is room for criticism on all sides. We hope that this criticism will also come, especially from people who can say something about this matter. We have made a start because practical experience is lacking. This theoretical approach may help us to have practical experiences more quickly.
P.J.C. Vedder
A. Oversteyns
Line art by: M.B. Oversteyns-Reynaerts 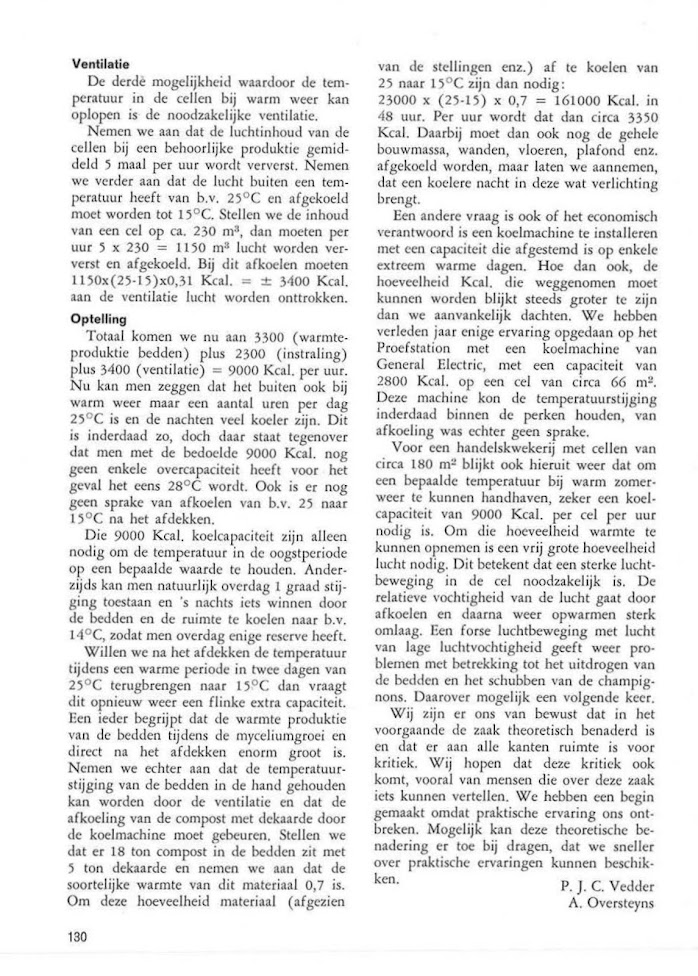 This is only of interest to those within the Mushroom Growing business...
Written 1966-5 for CHAMPIGNONCULTUUR