You have read my blog posts about Pieter's older brothers being deployed in Indonesia for several years.
Pieter's Mom was the loyal writer and you have seen one photo where she is penning a letter... 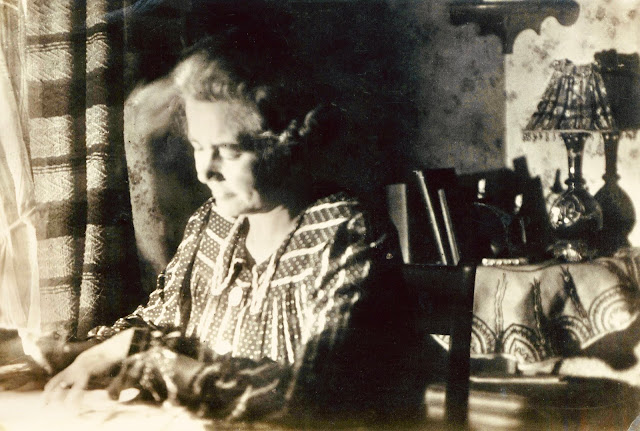 This photo where she is in DEEP Thoughts while penning a letter...
She also enclosed news paper clippings to send along with the letter, as well as some money...
Then, scooping up the leftover clippings, for throwing them into the stove - she ACCIDENTALLY grabbed her leather wallet instead!
So Pieter recalls this incident very vividly. The bulging leather wallet inside the flames and by the time they tried to rescue it, with something - it was too late.
Engulfed in flames, wallet and household money went up in smoke...
SAD!
~
My Dear Mother-In-Law has been a loyal letter writer.
Till her death on November 21, 1989 she almost weekly wrote us a letter, just as I've done all those years.
She was 94.5 years old and a colon cancer survivor.
Below is her final letter to her family: 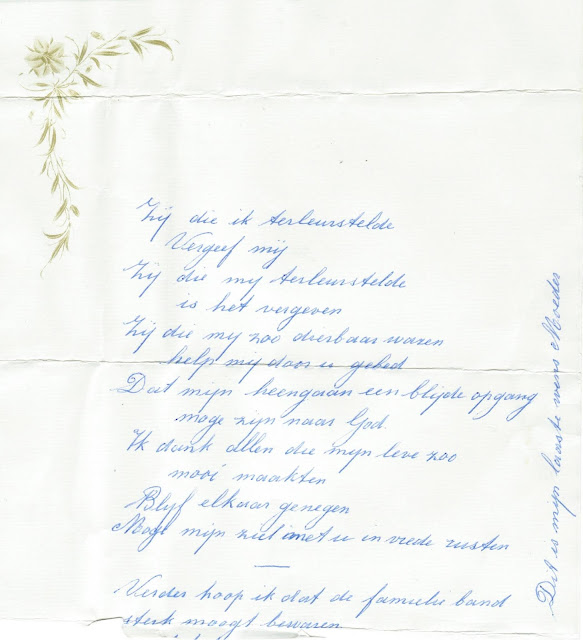 Zij die ik teleurstelde
Vergeef mij
Zij die mij teleurstelde is het vergeven
Zij die mij zoo dierbaar waren help mij door uw gebed
Dat mijn heengaan een blijde opgang moge zijn naar God.
Ik dank allen die mijn leven zoo mooi maakten.
Blijf elkaar genegen.
Moge mijn ziel met u in vrede rusten
Verder hoop ik dat de familie band sterk moogt bewaren.
Dit is mijn laatste wens, Moeder
~
The ones I let down
Forgive me
Those who let me down are forgiven
Those who loved me so much help me through your prayer
That my passing may be a happy onset to God.
I thank all who made my life so beautiful.
Keep affection for each other.
May my soul rest with you in peace
Further I hope that the family bond will be kept strong.
This is my last wish, Mother