One of the many digitalized treasures I've come upon, is this almost complete Avé Maria from Bach-Gounod, sung by my Dad on October 9, 1994.
Husband Pieter joined Dad and the neighborhood choir AMC, as they sang during a Mass by request of then Roman Catholic Pastor Thijssen, the brother of Dad's neighbor, for videotaping segments.
This was at the Onze Lieve Vrouw Geboorte (Our Lady's Birth) Roman Catholic Church that had been restored after the damage from WWII.
A building by architect Pierre Cuypers 1827-1921.
In 1236 there was already a small Romanesque style Church.
In 1460 a new Gothic style Church got built on this site.
In 1869, during the demolition of the old Church, a Roman tri-god stone was discovered, dedicated to Minerva, Hercules and Juno.
The stone served as a pedestal for a Jupiter column and is considered one of the most beautiful in the Province of Limburg.
This was inside the beautiful Roman Catholic Church alongside the River Meuse... 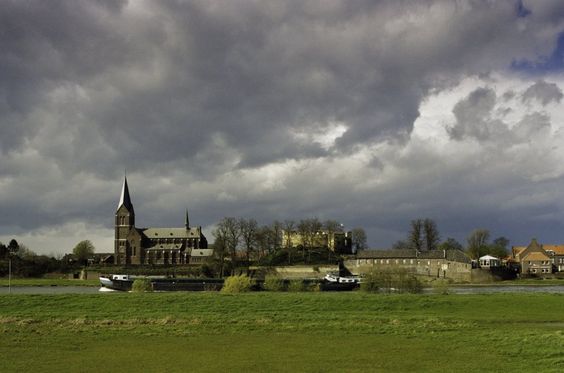 Naming Angels and Recognizing Spirits...
Especially at present times we need this!
Wishing you and your family a meaningful Advent Season
*Dad starting singing in the Church choir at the age of 17, and later joined the Horster Mannenkoor (the big choir). Dad received two royal awards for being 70 years and 80 years a singer; unique for The Netherlands.
Dad only joined Mom's elderly choir Levensvreugd on October 9, 1997 at the age of 76... as he never felt being an elderly... 😉
Related link:
{Mary The Most Powerful Woman in the World} | previous post by me
{Vintage Religious Paper Lace from France and Immaculate Conception} | previous post by me
From CitizenM Hotel on Delta Airlines from Amsterdam to Savannah, Georgia | previous post by me
Posted by Mariette VandenMunckhof-Vedder at 8:00 PM