{No fewer than 7 American Presidents are Direct Descendants of the Leiden, Netherlands PILGRIMS}

We are once again close to the U.S.A. Thanksgiving celebration, on the 4th Thursday of November. Since there is such a strong historical link between The Kingdom of The Netherlands and the U.S.A. I would like to dedicate this post to some History about the PILGRIMS. No fewer than 7 American Presidents are Direct Descendants of those Leiden PILGRIMS that sailed from The Dutch Republic to the New World. 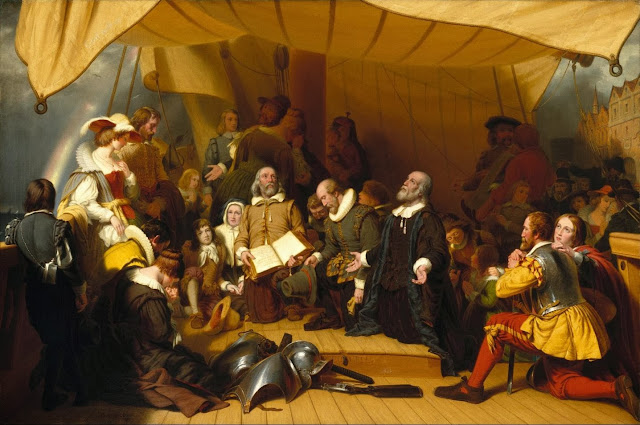 Brooklyn Museum - Embarkation of the Pilgrims - Robert Walter Weir
This is how those Pilgrims went on board for arriving in the New World after having stayed in Leiden for about 11 years.
For Life in Leiden you can click the hyperlink to read about some very interesting facts.
For a Leiden Pilgrim Tour you can click on the hyperlink to actually see a video of the university city of Leiden where they lived all those years. ErfgoedLeiden.nl removed that video... 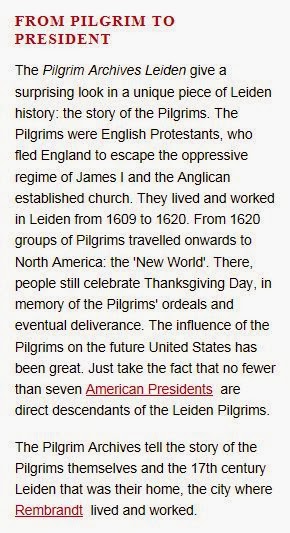 Indeed, no fewer than 7 American Presidents are direct descendants of the Leiden Pilgrims.
The Pilgrim Archives tell the story of the Pilgrims themselves and the 17th century Leiden that was their home, the city where Rembrandt lived and worked.

ErfgoedLeiden.nl - link no longer shows the above info... 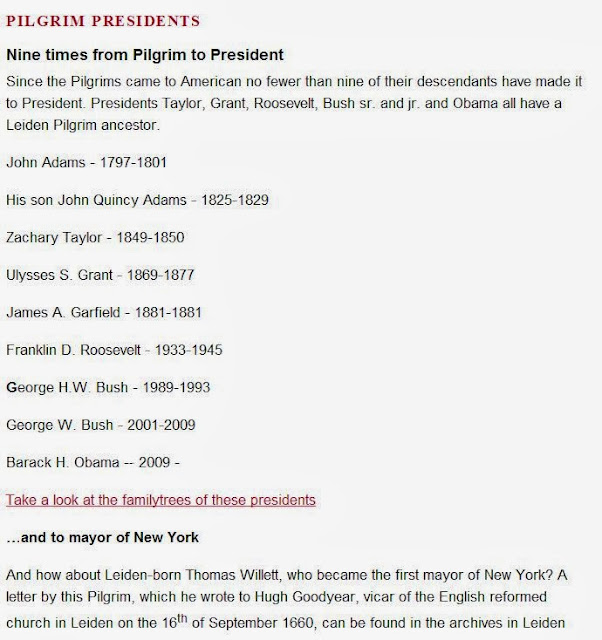 From Leiden Pilgrim to American president - link from where you can take a look at the familytrees of these presidents.
Presidents Bush Sr. and Jr. do share the same ancestor with Barack Hussein Obama: Thomas Blossom.
Have a look as it is quite interesting!
Wishing all U.S.A. citizens a very Happy Thanksgiving!
Too bad the above info has been taken down...

Related links:
{Happy Thanksgiving - From Pilgrim to President} | previous post by me

Posted by Mariette VandenMunckhof-Vedder at 6:06 PM

Email ThisBlogThis!Share to TwitterShare to FacebookShare to Pinterest
Labels: From Pilgrim to President, Thanksgiving, The Netherlands