Coming back from my consulting work in Germany, on Wednesday, June 3, 1987, I did guide a Dutch gentleman and friend, Jan Thielen. He had picked me up at my Parents' and we enjoyed the privilege of KLM Royal Dutch Airlines' business class 'Van Gogh' room to relax. A great luxury, due to my courtesy card.

While Pieter was in Australia and New Zealand, I'd also gone the day before, to the cremation of Pieter's former boss, in The Netherlands and met with lots of friends.

Now we landed in Atlanta, and it happened to RAIN so heavily, due to a tropical thunder storm!

Luckily I had stuffed my leather travel bag, with an extra coat, just to fill it up.

Now we each had a coat, for hanging over our head... I used my Burberry trench coat.

We hung the wet coats in the back of the car, over the luggage and drove home.

Jan, politely had asked me to press his business suit as his pants still had gotten the full load from the rain, below the coat...

He was one of our many house guests and he used our guest bedroom.

Next day we all three had breakfast on the patio, and Pieter went with Jan to the Campbell mushroom plant. 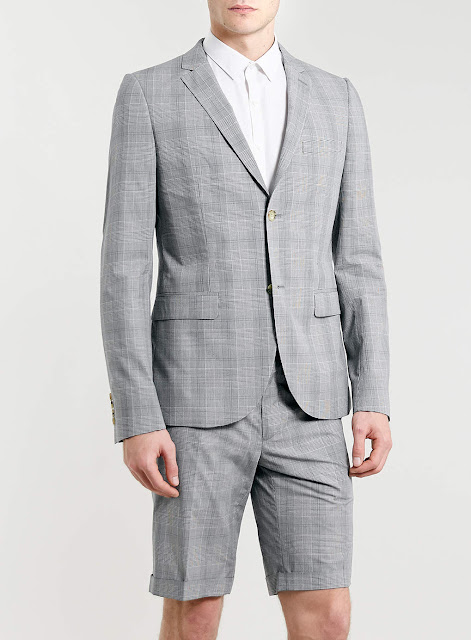 Nicely cuffed... The 'Short Suit' click for link
Pieter called me from the Mall in the late afternoon, and asked if I joined them, as Jan wanted to buy a tennis racket for son Ruud.
At said store, I found myself white slouch socks! As I was wearing in previous post...
Then, I held a pack of black slouch socks up to Jan and said: You ought to buy these, for wearing with your business suit! 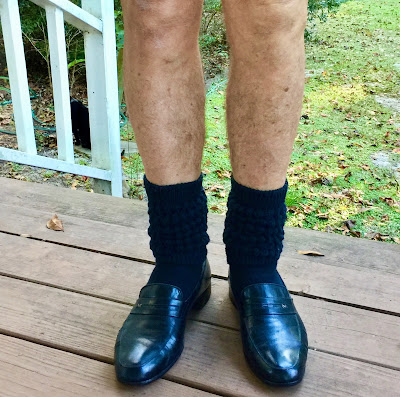 Like this, dress shoes with black slouch socks, as husband Pieter is showing off here.

To Jan I continued: Well... I better tell you the truth now. Those knees were so saggy, I had not succeeded in pressing the middle pleat neatly back again.
SO, I had to cut them off instead and changed them into some neat short suit pants, again WITH cuff, just like before.
I will NEVER forget Jan's face as he looked at me. He did NOT buy those black slouch socks and he hastily went to have the racket rung up and we went home.
He then did scoot straight from the garage, through our kitchen into the hallway, to his guest bedroom.
I could hear him yell out: HERE IT HANGS, NEATLY PRESSED!
He told me that he believed me, as I told him I'd altered it as it was not possible to modify it.
We all three had a good laugh!
But frankly, I would have loved to pull off this prank, videotaping it, of course.
Next day, I drove with Jan again to the airport in Atlanta and did change his flight from Texas to Florida and brought him to the gate for his departure to Texas.
Went shopping for Pieter at Muses in Lenox Square, Atlanta where I found 3 Burberry polo shirts for Pieter for Father's Day and some Lagerfeld cologne.
Related link:
{The Short Suit for Men - Now and Back Then} | previous post by me showing husband Pieter and my Dad wearing them!

{Part XVI of Husband Pieter's Trip to East Asia - Taipei, Taiwan} | previous post telling about the 9 weeks of Pieter and I on the go, and also having Mom & Dad for 4 weeks in-between!